Thanks for reading! Log in to continue.
Enjoy more articles by logging in or creating a free account. No credit card required.
Log in Sign up Become a Member
You have permission to edit this article.
Edit 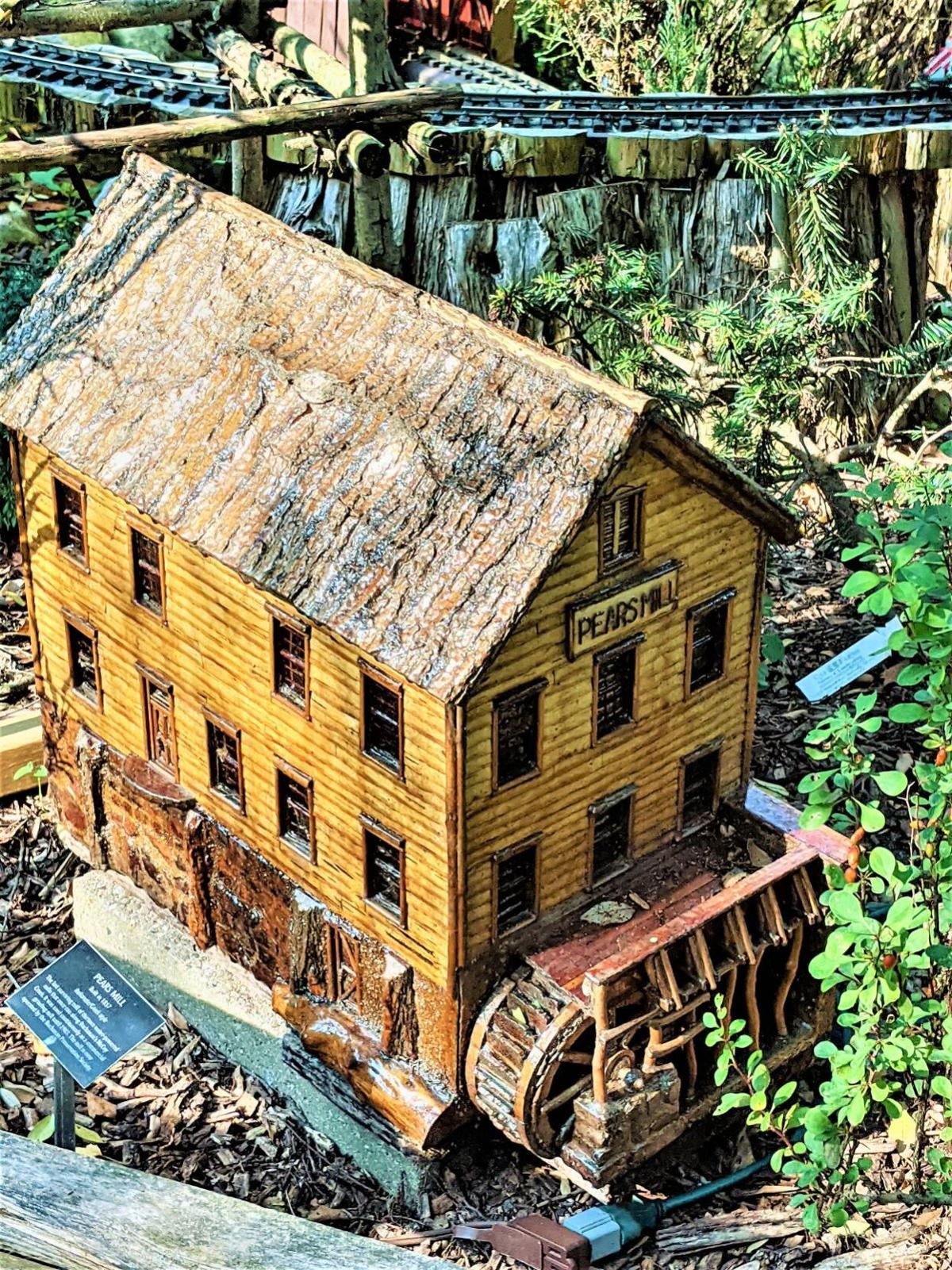 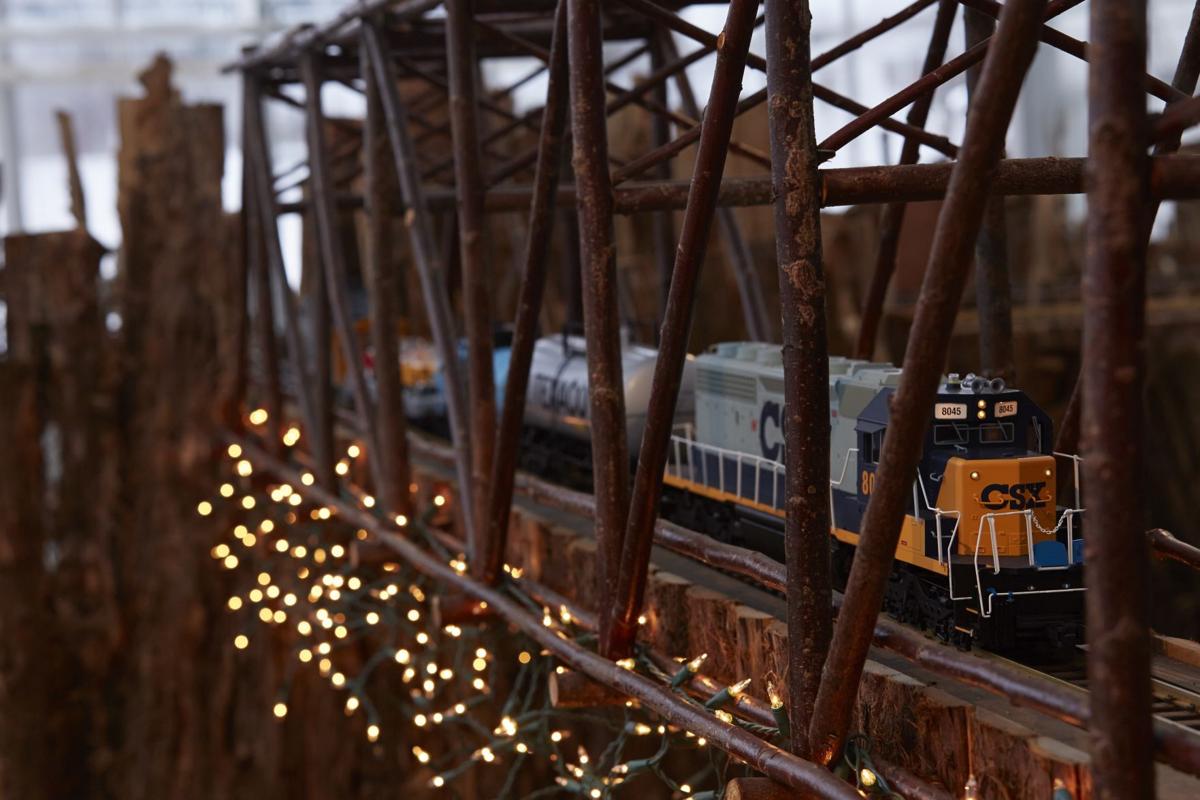 Fredrik Meijer Gardens & Sculpture Park in Grand Rapids decorates the model railroad in the Victorian Parlor Garden for the holidays, when it features 42 cultural displays and trees. 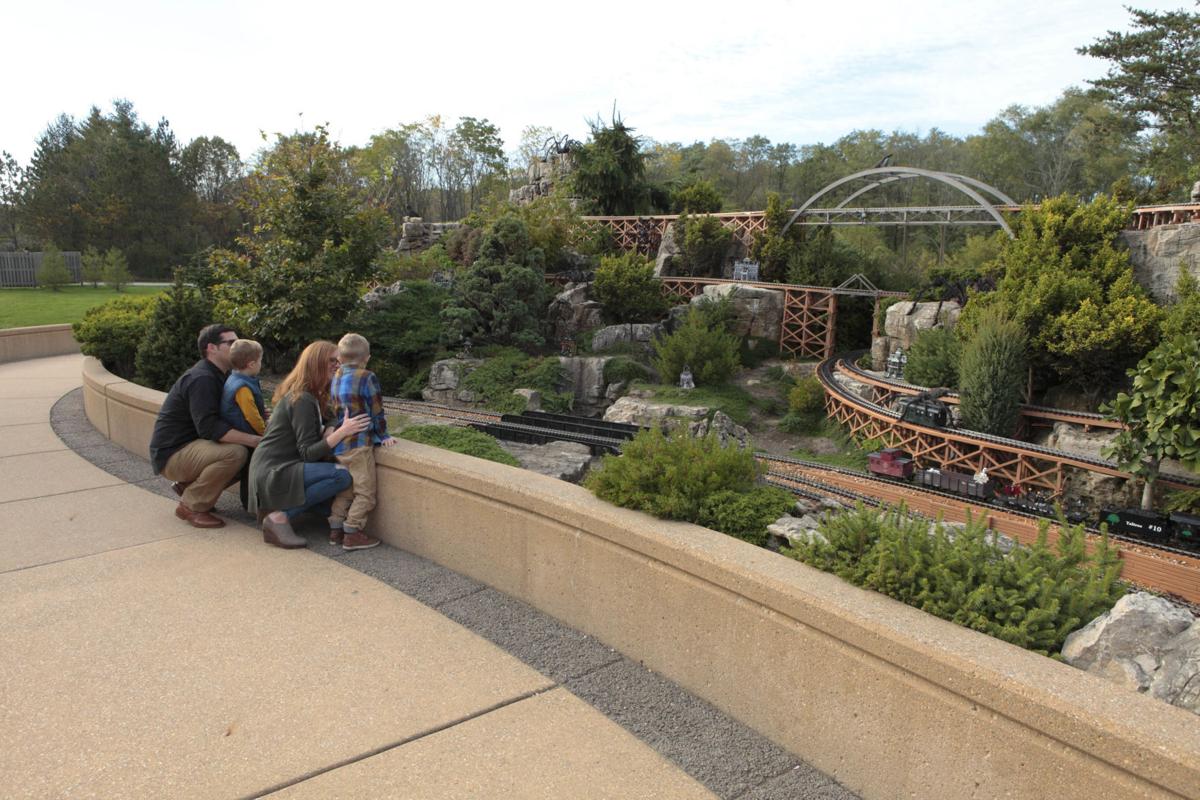 A family watches the train at Gabis Aroboretum in Valparaiso. 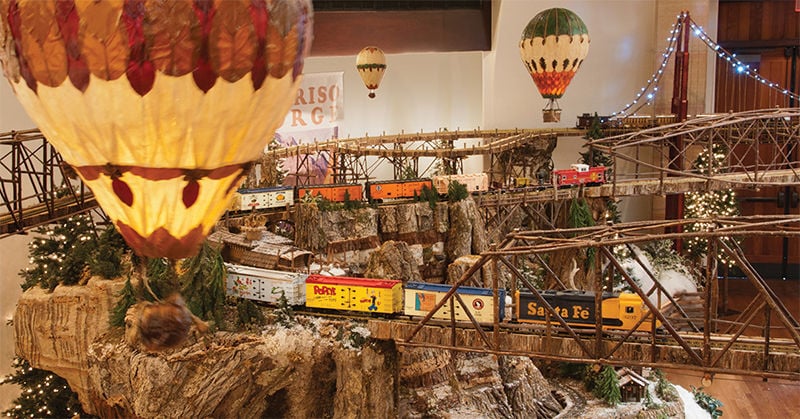 Eiteljorg Museum hosts "Jingle Rails: The Great Western Adventure" through most of December. 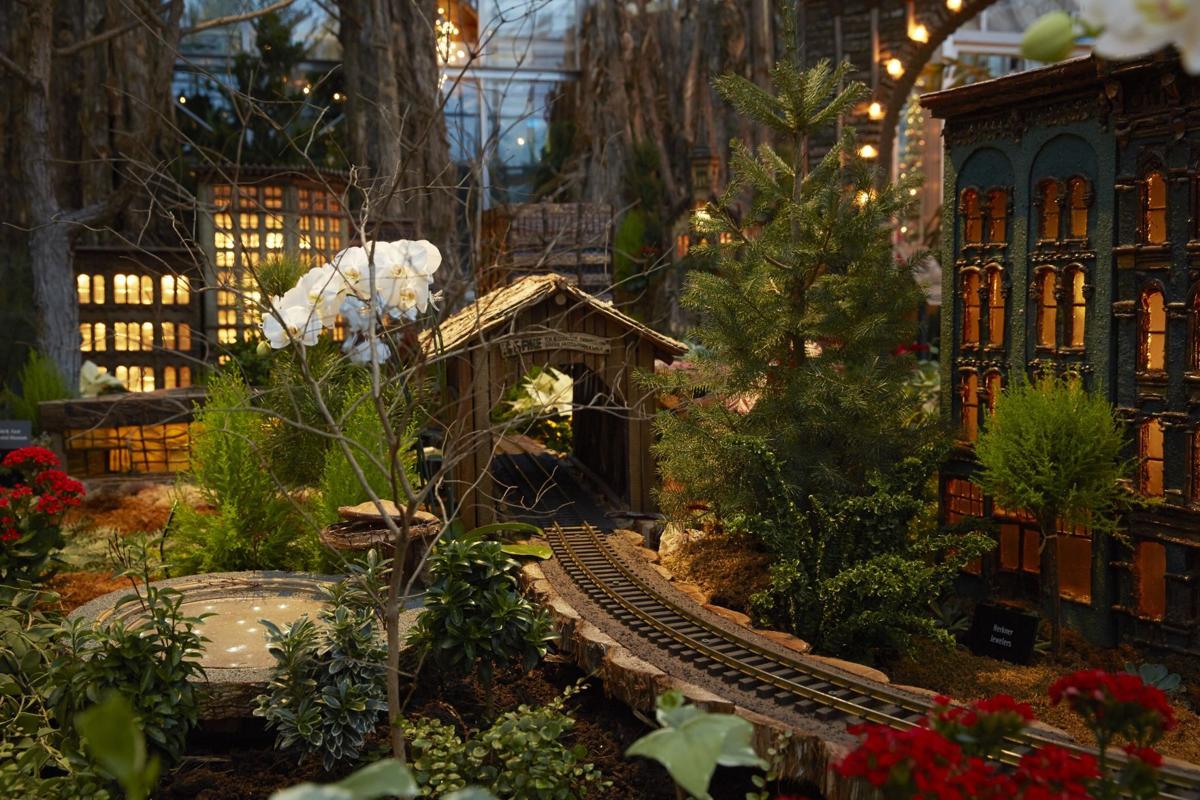 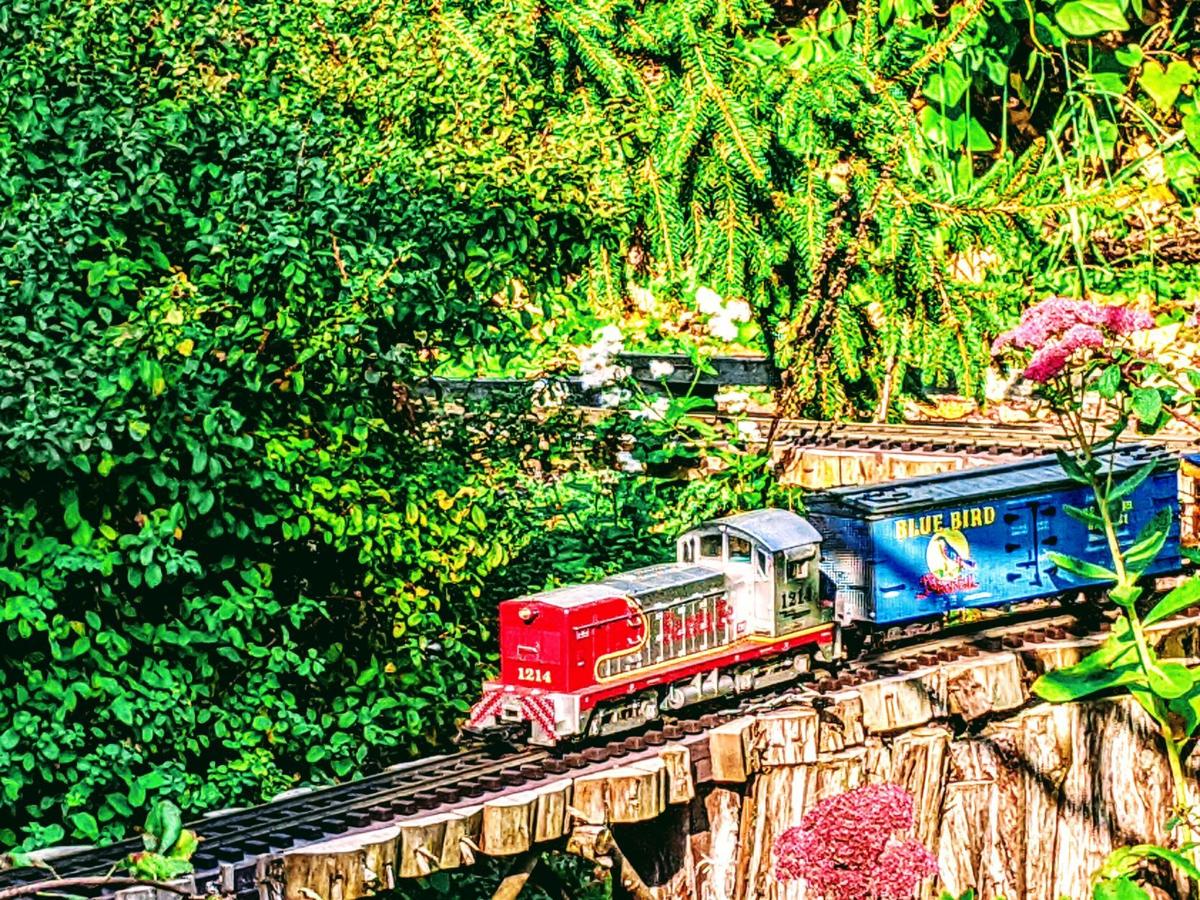 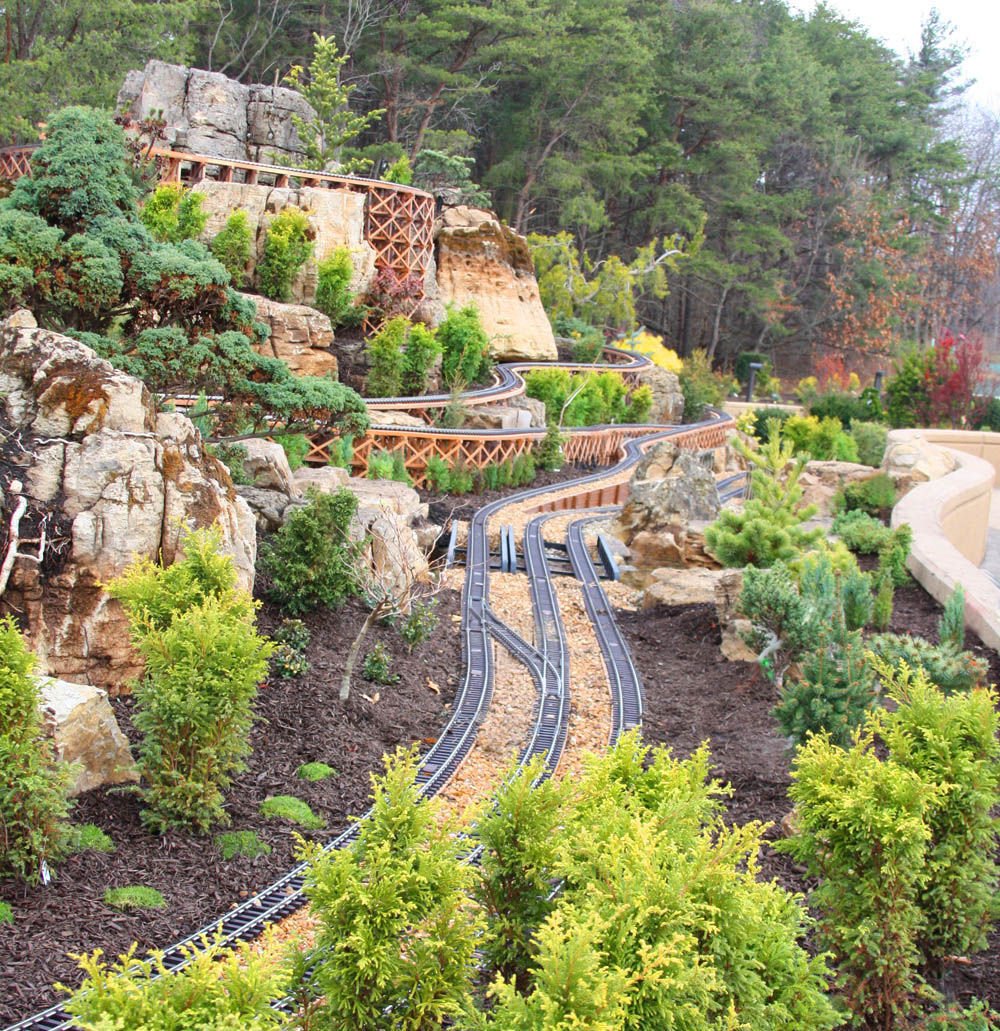 The railway garden at the 360-acre Gabis Aroboretum in Valparaiso is open through the end of the month. 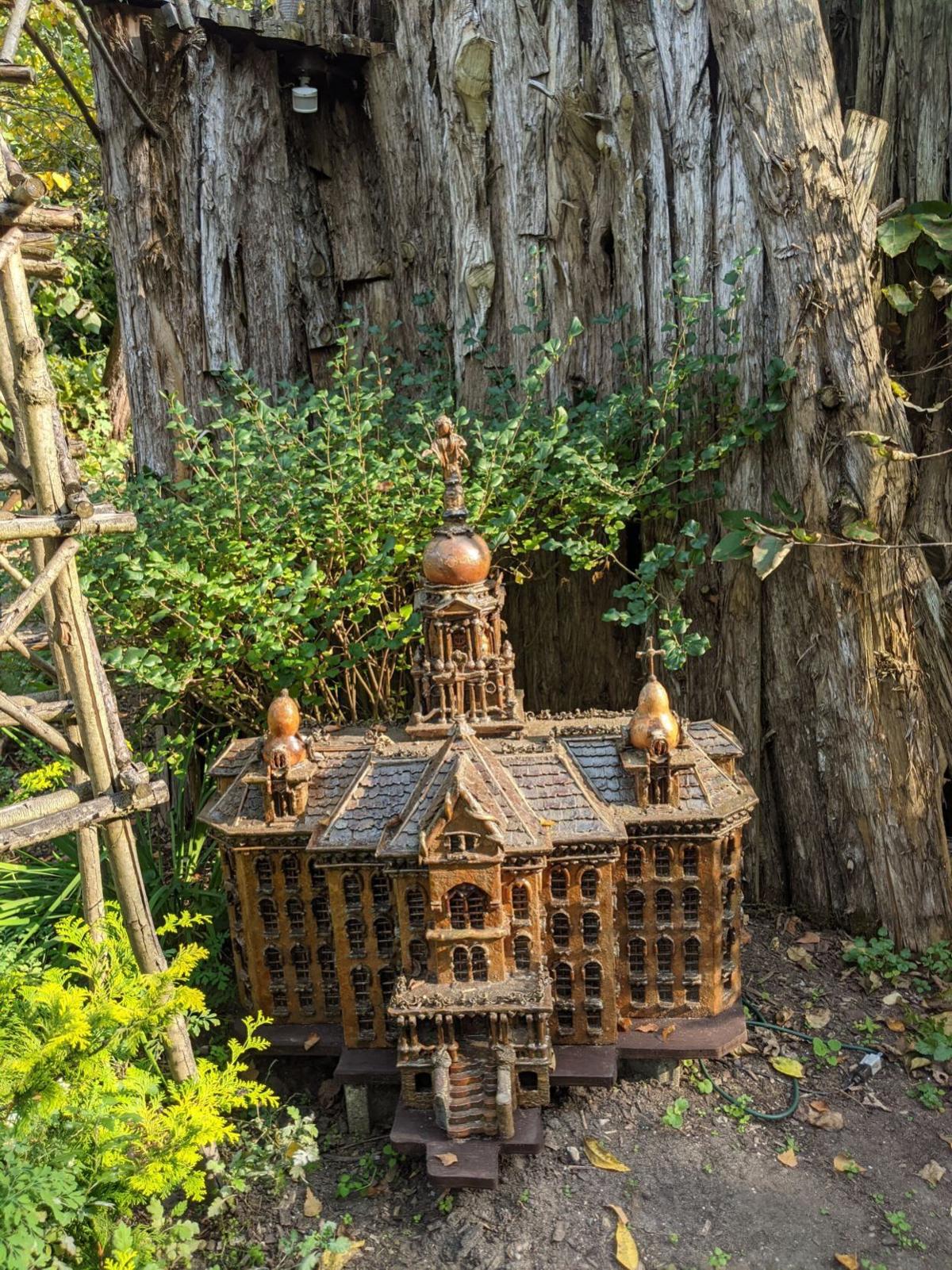 Fernwood Botanical Garden's model railroad features replicas of area landmarks including the University of Notre Dame's administration building, all made with natural materials.

Trains move in and out of sight, as they burrow into mountain tunnels, rumble past a seven-foot waterfall and pass under a pedestrian walk-over bridge, covering 510-feet of track at four varying elevations, ranging from ground level to seven feet.

It’s a landscape of dwarf evergreens, flowering pink autumn sedums, trees pruned to fit the scenery and local landmarks such as the University of Notre Dame’s Golden Dome and Southwest Michigan sites including the historic Pears Mill, built in the 1860s and still standing in Buchanan, the St. Joseph North Pier Lights and the train depot in Niles, built in 1892 and a setting for such movies as "Continental Divide," "Midnight Run" and "Only the Lonely." Each is fashioned from materials from nature such as twigs, moss, bark, seeds and scales from pine cones, and they change with the season.

The scene could be from a fairy tale, but instead it’s the outdoor railway garden at Fernwood Botanical Garden in Niles. The railway garden, designed by noted railroad garden designer Paul Busse, also features three island gardens, a seven-foot trestle bridge and a mountain range soaring seven-feet high, its stream cascading down into a 10-foot-wide lake. The outdoor railway is open until Oct. 31, but don't worry if you can’t make it. The 105-acre Fernwood, with its 10 different ecosystems along the St. Joseph River, also features an indoor railroad garden decorated for the upcoming holidays.

Fernwood’s outdoor railway garden is just one of a fascinating selection of gardens featuring miniature railroads open to visitors this fall and winter.

Closer to home, the railway garden at Purdue University Northwest's 360-acre Gabis Arboretum in Valparaiso is open until Oct. 31, coinciding this month with its Trail of Scarecrows, the annual competition where students work together to create a scarecrow based on themes, books and characters. So a visit to see the railway garden also should include a perusal — and vote on — the scarecrows that line the edge of the prairie, one of many ecosystems in the arboretum.

The G-gauge model train takes visitors through our country’s steam engine history, moving across prairies as the laying of rails opened up markets and expanded the U.S. by shipping goods, grains, livestock and people. The Gabis Railway Garden shows how railroads impacted the Civil War, the Industrial Revolution and how we became the country we are now. But even more, it’s fascinating to watch.

Because of COVID, guests need to reserve a timed-entry ticket online and to practice social distancing.

It’s a bit of a drive, but Michigan’s largest outdoor model railroad, with 2,500 feet of track, traverses through the fantastic grounds of Castle Farms in the pretty lakeside town of Charlevoix in northwest Michigan. The French Chateaux-style buildings were built in 1918 by Alfred Loeb of Chicago, then-president of Sears, Roebuck and Co. It was a working farm and a great way to show off the agricultural equipment sold by Sears, and now is a wedding venue, winery, bistro, and is open for guided and self-guided tours.

With several levels of tracks, the model trains include 1890s steam locomotives and 1950s diesel locomotives, and the landscape is designed as a townscape of magical looking buildings, a waterfall, miniature trees and gardens. And as a double bonus for the train lovers, there’s the whimsical Fantasy Railway with such touches as an elevated track moving through the castle’s Hedge Maze and imaginative edifices like the Double Helix Towers, which are castle-like towers with turrets and fountain. In December, the interior of the castle becomes a winter wonderland.

The amazing Fredrik Meijer Gardens & Sculpture Park in Grand Rapids is ranked among the top 100 most-visited art museums worldwide by Art Newspaper, the leading publication in global art news. The 158-acre main park has 200 indoor and outdoor sculptures, conservatories and a variety of gardens, including the Earl and Donnalee Holton Arid Garden; the Gwen Frostic Woodland Shade Garden, named after the noted northern Michigan artist; and one that every kid is sure to love, the Kenneth E. Nelson Carnivorous Plant House.

But during the holidays, a huge draw is the model railroad located in the Victorian Parlor Garden. It’s part of Meijer’s annual Christmas and holiday “Traditions Around the World,” featuring 42 cultural displays and trees.

Over the years, new buildings have been added to the trainscape for a total of 30, with miniatures of places familiar to western Michigan residents including Fifth Third Ball Park, the Frank Lloyd Wright-designed Meyer May House and the historic Voight House. The trains pass by these natural-element buildings while gliding over high trestles made of tree bark and logs, through forests and down into valleys and well-groomed growths of holly, birch, dwarf spruce, sedum, juniper, arborvitae and cypress, amidst seemingly endless amounts of twinkling lights.

In White River State Park in Indianapolis, the only urban state park in the state, each holiday season the Eiteljorg Museum hosts "Jingle Rails: The Great Western Adventure," running through most of December. The G-gauge, nine model trains course their way through an Indy-centric set of scenes, with miniature versions of Monument Circle, Union Station, the Eiteljorg Museum and Lucas Oil Field. It then heads west, passing by Native American villages, the grand railroad lodges of the past and landmarks like Mount Rushmore, Old Faithful, Yosemite, Grand Canyon, Hoover Dam and many others, including the Las Vegas Strip.

Though the journey encompasses the western half of the country, Jingle Rails itself is large enough to fill a room, making watching its journey a fascinating tour of part of our country while retaining the wonder that is garden railroads.

Tickets are time-slot limited and good for only one day.

To learn more about the railroad gardens discussed in this story, visit these websites.

Detectives investigating the homicides of Elijah Robinson and Maxwell Kroll this month have secured charges alleging a Gary couple suspected the teens of taking a gun, court records show.

The boy's sister, April L. Wright, 26, and her wife, Rachel R. Wright, 26, were arrested Thursday on charges of murder and aggravated battery, among others.

Infant dies from blow to head; father charged with murdering her during diaper change

Investigators reviewed a number of photographs of Morgan taken the night of her death and noted bruising and scratches on her head that were not present before Harling took her into the bathroom, records allege.

Akyumen, a LA-based tech company, plans to take over the long-underused and financially troubled Genesis Convention Center, which it will turn into its corporate headquarters.

CROWN POINT — The sister of a 10-year-old Merrillville boy who died Oct. 12 and another woman were charged Friday with murder after an autopsy…

Paintball prank met with return fire from a real gun

"The male subject, thinking that he was being shot at by the passenger in this vehicle, drew his concealed firearm and fired several shots at the vehicle," police said.

Coca-Cola is saying goodbye to 200 brands, or half of its portfolio.

Jacob Addison, 20, of Union Township, was driving the lawnmower east along the north shoulder of the highway when a westbound Nissan Sentra veered off the highway and struck the mower, police said.

Fredrik Meijer Gardens & Sculpture Park in Grand Rapids decorates the model railroad in the Victorian Parlor Garden for the holidays, when it features 42 cultural displays and trees.

A family watches the train at Gabis Aroboretum in Valparaiso.

Eiteljorg Museum hosts "Jingle Rails: The Great Western Adventure" through most of December.

The railway garden at the 360-acre Gabis Aroboretum in Valparaiso is open through the end of the month.

Fernwood Botanical Garden's model railroad features replicas of area landmarks including the University of Notre Dame's administration building, all made with natural materials.