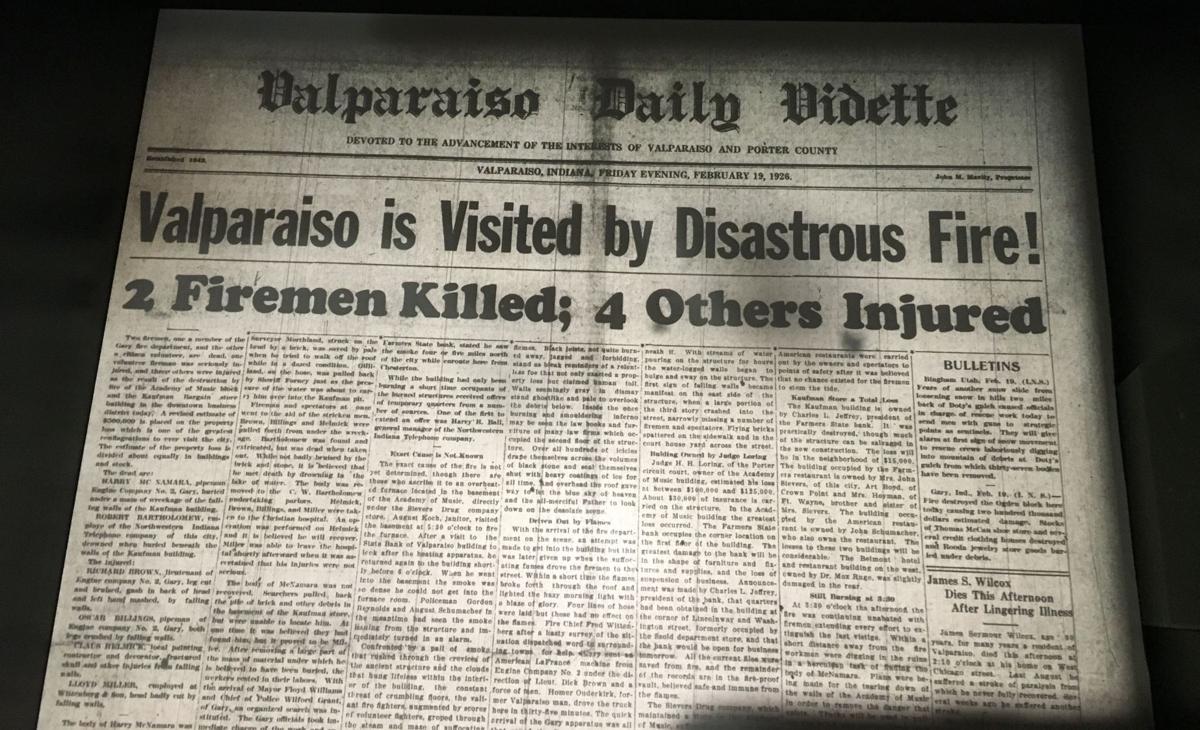 The Feb. 19, 1926, issue of the Valparaiso Daily Vidette gave a lengthy detail of a fatal fire in downtown Valparaiso. 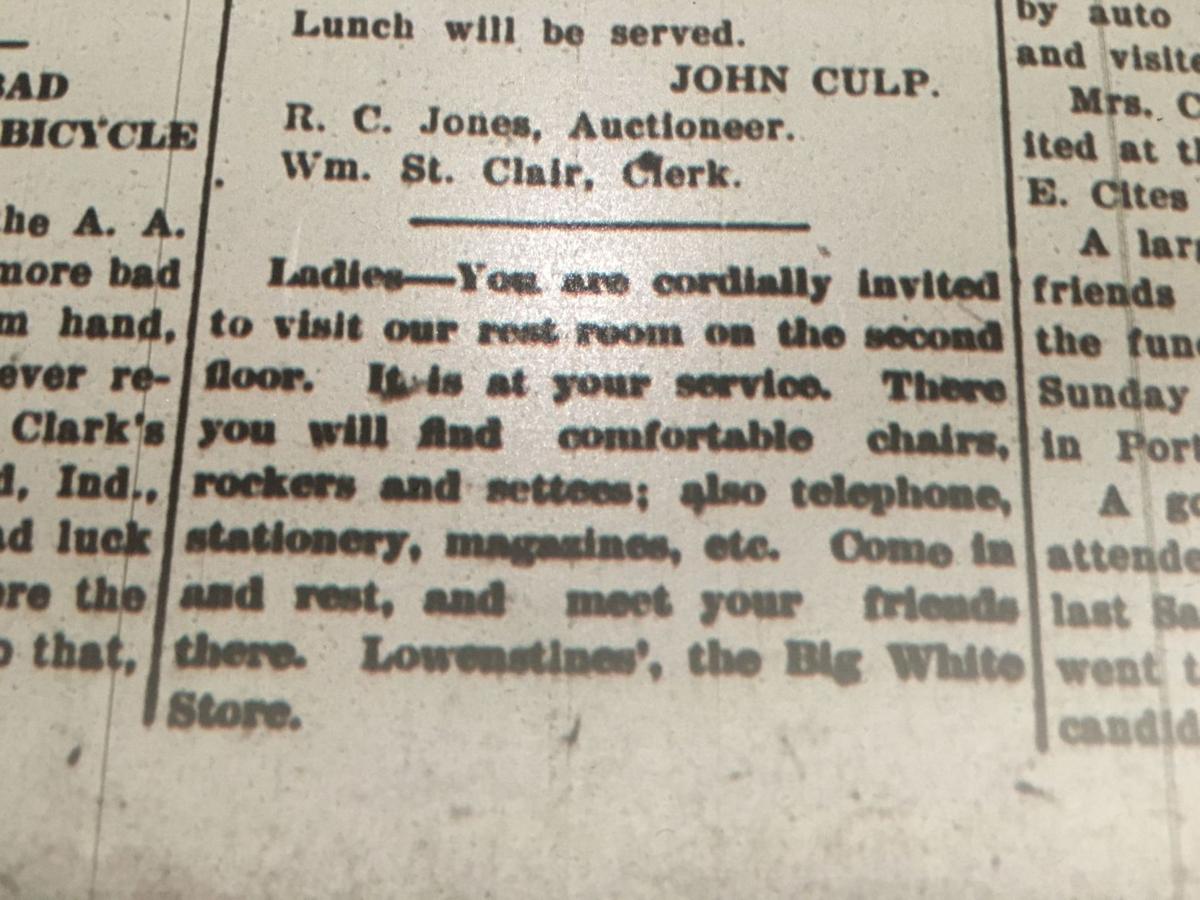 This ad for Lowenstine's Department Store in downtown Valparaiso appeared in the Porter County Vidette on Sept. 27, 1916. 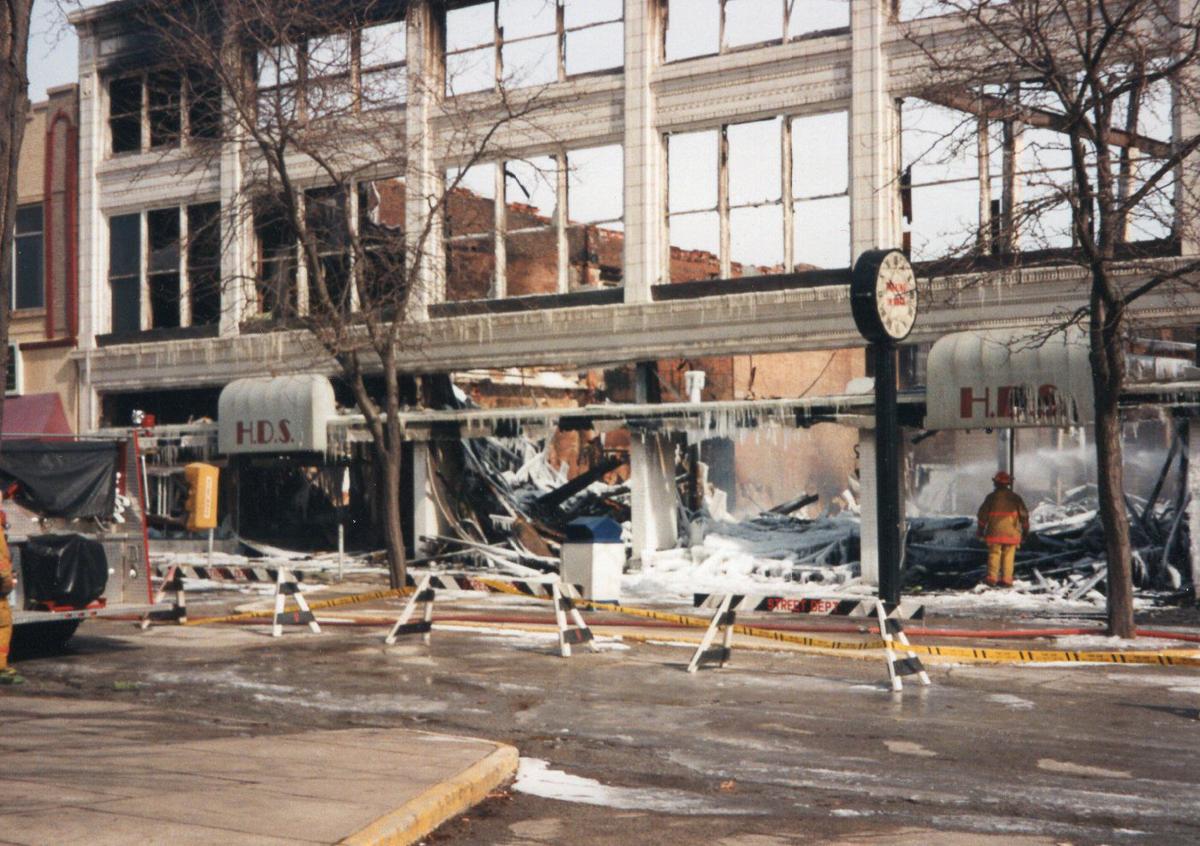 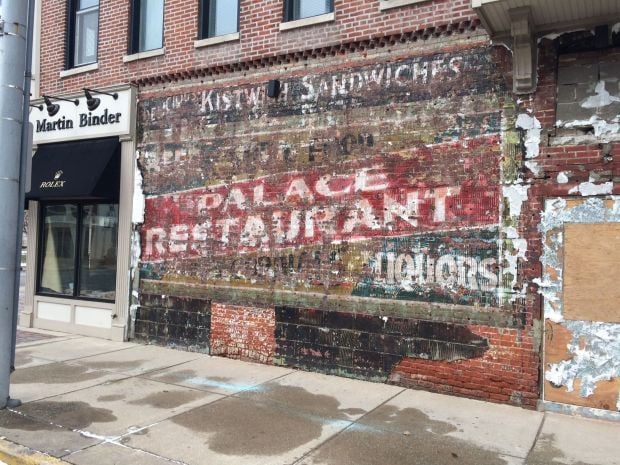 A sign for the old Palace Restaurant was discovered during renovation of the building on the corner of Lincolnway and Franklin Street that housed Martin Binder Jeweler. 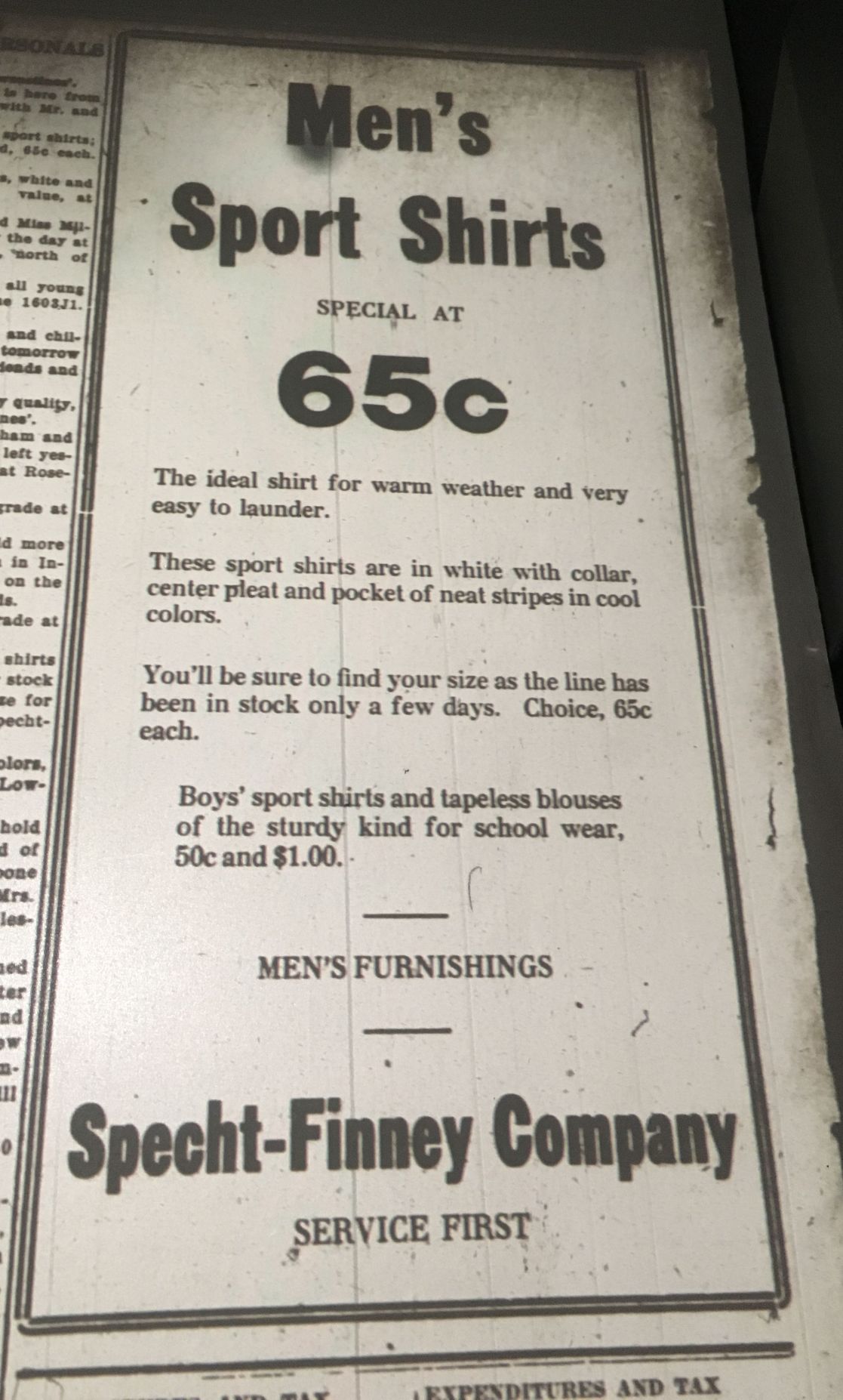 A 1916 ad for Specht-Finney Co.'s store in Valparaiso. 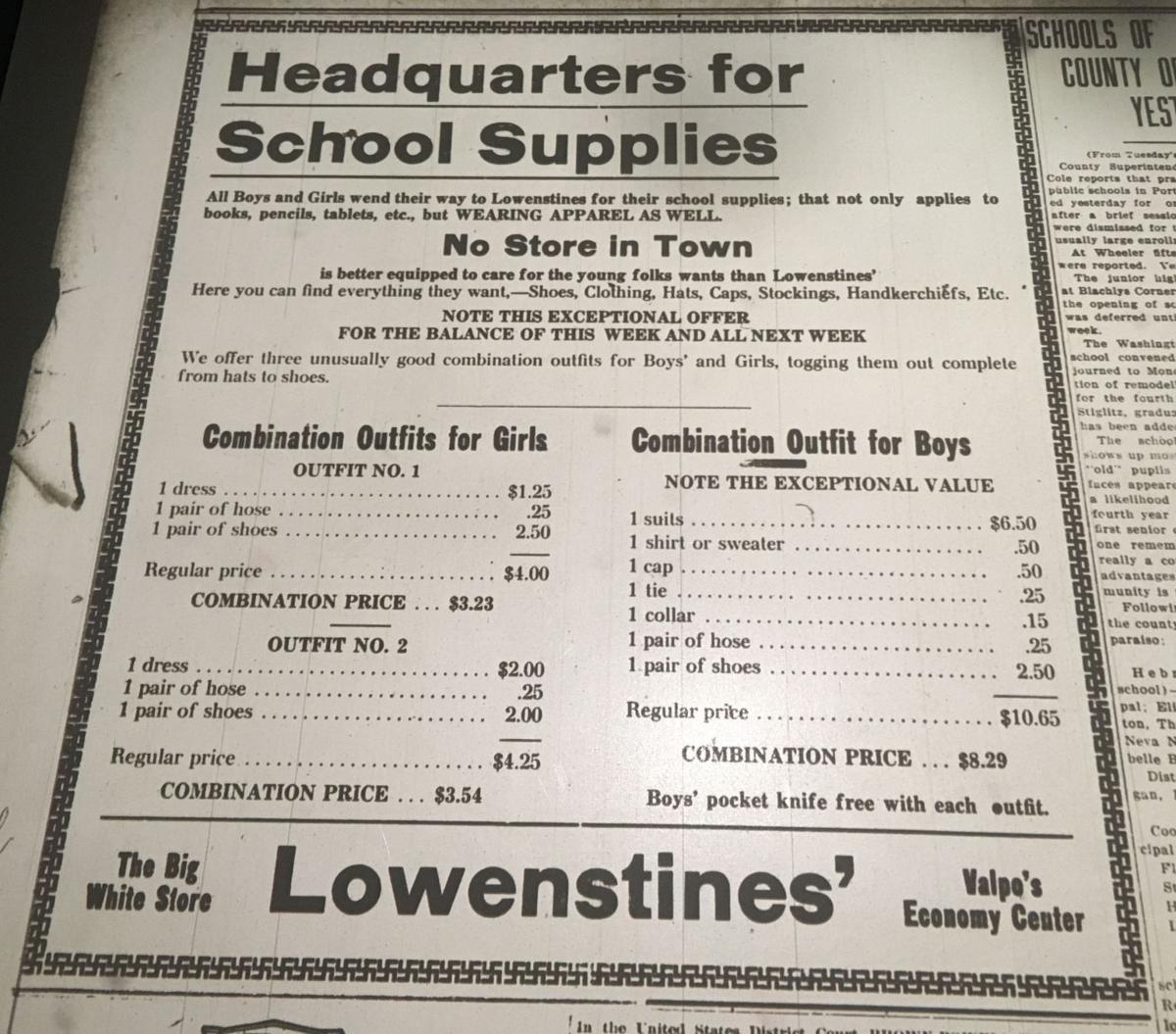 An Aug. 9, 1916, ad for Lowenstine's Department Strore in Valparaiso. 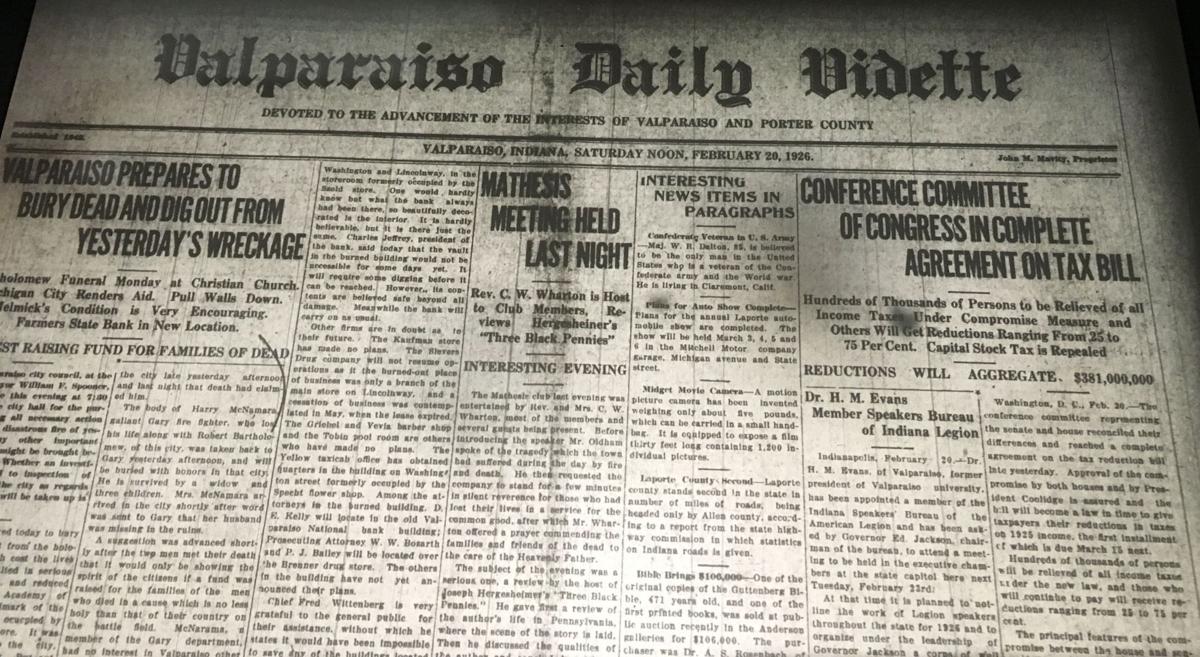 The Feb. 20, 1926, issue of the Valparaiso Daily Vidette told how the city was preparing to bury the two dead firefighters and dig out from the wreckage of the big fire in downtown Valparaiso. 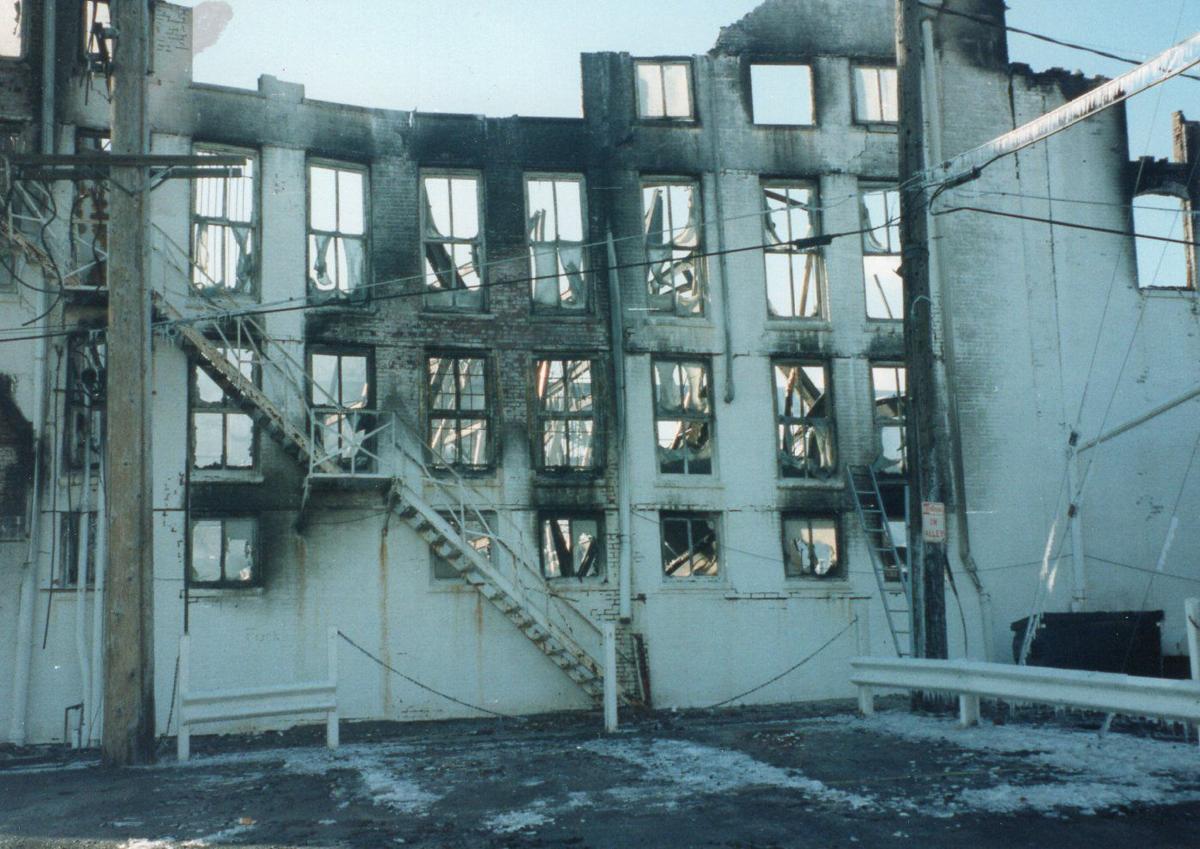 This ad for Lowenstine's Department Store in downtown Valparaiso appeared in the Porter County Vidette on Sept. 27, 1916.

A sign for the old Palace Restaurant was discovered during renovation of the building on the corner of Lincolnway and Franklin Street that housed Martin Binder Jeweler.

The Feb. 20, 1926, issue of the Valparaiso Daily Vidette told how the city was preparing to bury the two dead firefighters and dig out from the wreckage of the big fire in downtown Valparaiso.

On Feb. 19, 1926, what started as a small boiler issue in the Academy of Music building quickly became a much bigger fire even though the building was well constructed. The wind picked up, fanning the flames. Firefighters quickly realized the building couldn’t be saved.

“They were fearful they would lose the entire block,” Porter County Historian Kevin Pazour said. So their efforts changed to abandon the Academy of Music and save everything else.”

Kauffman Bargain Store was next door, along with two restaurants, and there was a fancy bank.

“They thought if they could get up, get onto the roof, and get the water onto that building, they could create a barrier,” Pazour said.

“It had just opened not very long before, the very first for Valparaiso, an art deco building, the bank that stood on this block, that they spent $100,000 building. There were three little buildings between the Academy of Music and this bank, and they were determined not to lose their investment.

“So these guys — in fact it’s remarkable, if you go back and read the old newspaper – they pulled everybody in town, and I imagine by word of mouth and just running down the street. Anybody who was a firefighter, even if they were retired, was recalled to be a firefighter. Other departments from other towns were called to fight this fire. So they got up on that roof, and they dropped as much water as they could, and at one moment, in the blink of an eye, everything went wrong.

“As that back wall, that south wall, collapsed, and it fell into the Kauffman building. And in the newspaper they said it collapsed it like an egg shell.

“These guys who were on the roof, that guy sitting on the firetruck, (Wilbur) “Fish” Cowdrey – who would go on to fight a fire here (the courthouse) when that bell gave in and fell with a clank all the way to the basement – he was up on the roof with a hose. And that guy who came to the aid of the commissioners, Bill Pennington (see previous blog post), who was the sheriff? Well, he wasn’t the sheriff anymore, he was a firefighter again that day. He was up on the roof.

“And we have an image, with a handwritten note, that these guys with a little arrow were up on the roof, and when that wall fell, and collapsed it, the pressure of that hose almost pulled Fish Cowdrey ) into the fire, and if it wasn’t for Bill Pennington, who put a hand on him and pulled him back to safety, he would have ended up with the six guys who fell into that building — and unfortunately, two of them died.”

“It was the first instance of something like this happening.”

The restaurants next door that were saved served food and coffee for everybody. Lowenstine's Department Store, on the opposite side of the courthouse square, donated mittens to everyone suffering in the cold.

“This whole community came together to help and do what they could.”

Pazour is right about that. A fund drive for the firefighters and their families was quickly established. A banner headline told of residents being urged to donate a day’s pay to the fund.

The brick-lined bank vault in the art deco building that burned was saved, and it actually worked the next day. Operations resumed in a nearby building.

On July 8, 1917, Farmers State Bank reached an agreement with the Specht-Finney Department Store to use half the store’s building at the northeast corner of Franklin and Lincolnway, where Chase Bank stands today.

If you look closely, and in the right light, you’ll find an inscription at the entrance to the building that tells of its prior uses.

The art deco building on Washington Street that they were so proud of in 1926 was razed in the 1960s, when so many historic buildings were destroyed not just in Valparaiso, but across the country.

After Premier Theater town down in 1984, that was the last straw. Preservation became common after the public outcry over the demolition of a building that held so many fond memories for residents.

It wasn't the last fire to hit the courthouse squae.

On the east side of Franklin, across from the courthouse, stood Lowenstine’s, which donated mittens to everyone involved in fighting the 1926 fire. Lowenstine’s 1915 building stood there until it was destroyed by a colossal fire in 1996. Lowenstine’s had closed by then. It was Highland Department Store at the time.

Gallery: Obama through my lens

For the past 8 years I have had the privilege of being able to photograph the 44th President of the United States, Barack Obama. These are som…

Highland Department Store in downtown Valparaiso was destroyed by fire in March 1996. The building was the long-time home of Lowenstine's Depa…

If it’s a good day for a walk, try a stroll around Valparaiso’s courthouse square. There’s a…

On a near perfect morning with sunny skies and cool temps, Tim Huber of Portage breezed to the overall title with a time of 58.09 in the 14th …

Minas Department Store was among those who offered sales with prices "down to Earth" to mark the moon landing on July 20, 1969.

Democrat Thomas R. Marshall and Republican Charles W. Fairbanks, both Hoosiers, ran against each other for vice president in the close electio…

The carnival at the Porter County Fair takes on a special ambiance when the sky starts to darken.

BP's Whiting Refinery was built by Standard Oil Co. in 1893. These photos offer a glimpse of the refinery's history.

Gallery: Hammond's Night Out Against Crime

Lots of fun at Hammond's Night Out Against Crime

VALPARAISO — The Porter County Courthouse, built in 1883, is about to get a major exterior face-lift before interior work begins.