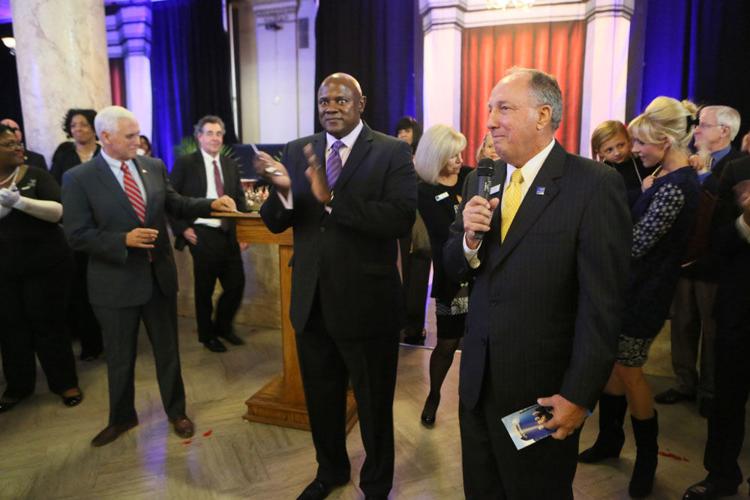 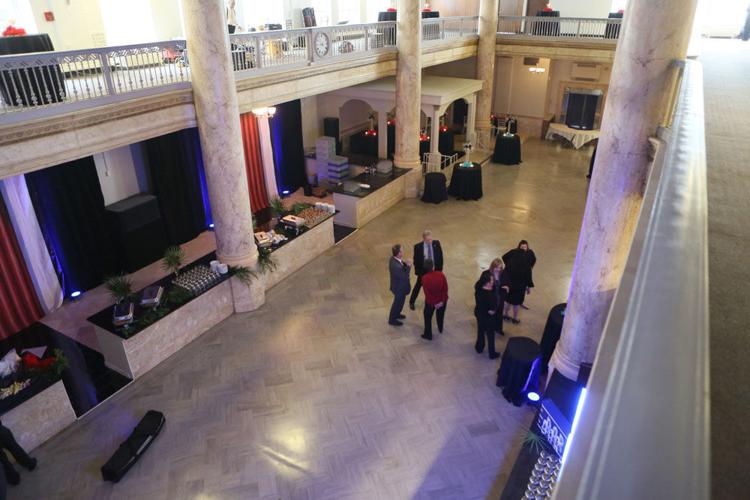 A view from the balcony shows the marble-encased lobby of the new Centier Bank on Broadway in downtown Gary. 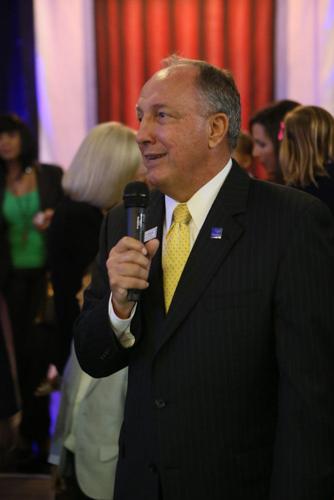 "We want to make Gary one of those marquee locations, and we put our marquee right at the top," Centier Bank President and Chief Executive Officer Mike Schrage said at the grand opening of the bank in downtown Gary in October.

GARY | Downtown Gary partied like it was the Roaring 1920s to celebrate the arrival of Centier, which hopes to spark a downtown renaissance in a hardscrabble city that's been plagued with crime and depopulation.

Spotlights swept across the historic 10-story century-old Gary State Bank tower, which now has huge Centier marquees and is being called the Centier Building. A red carpet on Wednesday welcomed dignitaries, including Indiana Gov. Mike Pence.

A jazz band played in the grand lobby, while party-goers in fedoras and feather boas nibbled shrimp cocktail, Caprese kabobs and fancy cheeses. They explored lock boxes in the bank vault, and scoped out a 1936 Packard and a Tommy Gun John Dillinger stole from the Porter County Sheriff's Office. Confetti streamers exploded everywhere after a few prepared remarks.

"We want to make Gary one of those marquee locations, and we put our marquee right at the top," Centier Bank President and Chief Executive Officer Mike Schrage said.

Developer Vance Kenney and his partners extensively renovated the building at 504 Broadway, which now includes a drive-through for the Centier branch and an 8,000-square-foot space in the lobby for special events, such as corporate parties. New tenants include the Gary sanitary district and an employment agency that's taking up the entire third floor.

But the highest-profile tenant is Centier, Indiana's largest privately owned bank, which has 51 locations, including in Gary's Miller, Glen Park and Midtown neighborhoods.

"There are many embers that are glowing in the Gary area," Schrage said.

"I can't say enough about the investments that have been made in the airport, the South Shore, the Railcats stadium, the investments the hospital has made. They're all outstanding, they're all growing, they're all making this a place for the future. Many of you remember Indianapolis had its low tides. I remember the 1960s down there, when it wasn't safe to walk outside. Well, we're going to try to form downtown Gary into something that's very special."

Pence said Centier's investment could help make the future of Gary brighter than its storied past.

"All of Indiana is celebrating this great announcement in the heart of Gary, Ind.," he said.

Gary Mayor Karen Freeman-Wilson said it was a great day for Gary and just the start of redevelopment downtown.

"We know the ArtHouse will be a great partner for you," she said. "We know it's always special to be the first in." ArtHouse: A Social Kitchen, promoted by Chicago artist Theaster Gates, will be an arts and culture destination combined with a culinary program the city hopes will spur economic development, similar to creative efforts in other challenged cities. It will also be located nearby in downtown Gary.

Redevelopment continues on the high-rise at 504 Broadway, where developers hope to build a four-story, $32 million data center that would replace the parking garage and be connected to the bank tower via a skywalk. The developers are currently trying to interest universities and health care systems in backing up their data at the site.

Schrage said it was only a matter of time before the rest of the floors in the building fill up. The building, which is the second-tallest in the city and built up to its current height of 142 feet high in 1927, was first erected as a two-story bank in 1909.

Chase Bank and Fagan Pharmacy have had a retail presence on the first floor, but much of the building had sat vacant for years before new developers purchased it two years ago.

"Many people in the state see Gary as a blemish," Schrage said. "I see it as a beauty mark. We're going to turn a blemish into a beauty mark. I look forward to reinvesting in the citizens and businesses of Gary."

"Many people in the state see Gary as a blemish. I see it as a beauty mark. We're going to turn a blemish into a beauty mark. I look forward to reinvesting in the citizens and businesses of Gary." -- Mike Schrage, Centier Bank president and CEO

Pence says Cline not fixed because of 'finite resources'

Centier Bank’s new branch in Gary is a symbol of reinvestment in Gary.

GARY — “Elders are the wisdom. Youths are the future.”

Centier Bank has opened a full-service branch inside the Strack & Van Til at 1515 US Hwy 41, extending its presence in one of the first co…

TUCSON, Ariz. — Police in southern Arizona are at odds with a small Indiana town over a Tommy gun taken from notorious gangster John Dillinger…

Downtown Gary is going to get a lot more colorful at night.

The historic Centier building in downtown Gary at 504 Broadway now has a high-speed fiber internet connection.

Police are searching for a suspect in a recent slew of vehicle thefts in unincorporated Liberty Township in Porter County, and are asking for …

A redevelopment project that would bring a Centier Bank branch to downtown Gary has gained ground.

GARY | The Steel City's second tallest building will soon be home to a Centier Bank branch and a technology center.

GARY | A data-storage facility planned for downtown Gary is recruiting health care providers to be tenants for the new development.

Centier Bank executives, along with NWI leaders and Gary mayor Karen Freeman-Wilson gathered at a groundbreaking reception to celebrate a new …

Much-anticipated ArtHouse: A Social Kitchen to open in downtown Gary

ArtHouse: A Social Kitchen, a project by the acclaimed South Side Chicago artist Theaster Gates, is throwing its doors open to the public this…

Sheriff's car John Dillinger stole recovered in Maine, to be displayed after parade through Crown Point

Thousands are expected to attend when Sheriff Lillian Holley's historic car returns to Crown Point for the first time in 87 years. The Discovery Channel will film scenes around Crown Point over the weekend for a show hosted by television star Josh Gates.

The hourlong episode Josh Gates shot about John Dillinger in Crown Point will air on Discovery at 7 p.m. Wednesday. It's the season premiere of the eighth season of his show "Expedition Unknown."

Items and services you shouldn't skimp on

What to think about before switching to online banking

What to think about before switching to online banking

A view from the balcony shows the marble-encased lobby of the new Centier Bank on Broadway in downtown Gary.

"We want to make Gary one of those marquee locations, and we put our marquee right at the top," Centier Bank President and Chief Executive Officer Mike Schrage said at the grand opening of the bank in downtown Gary in October.