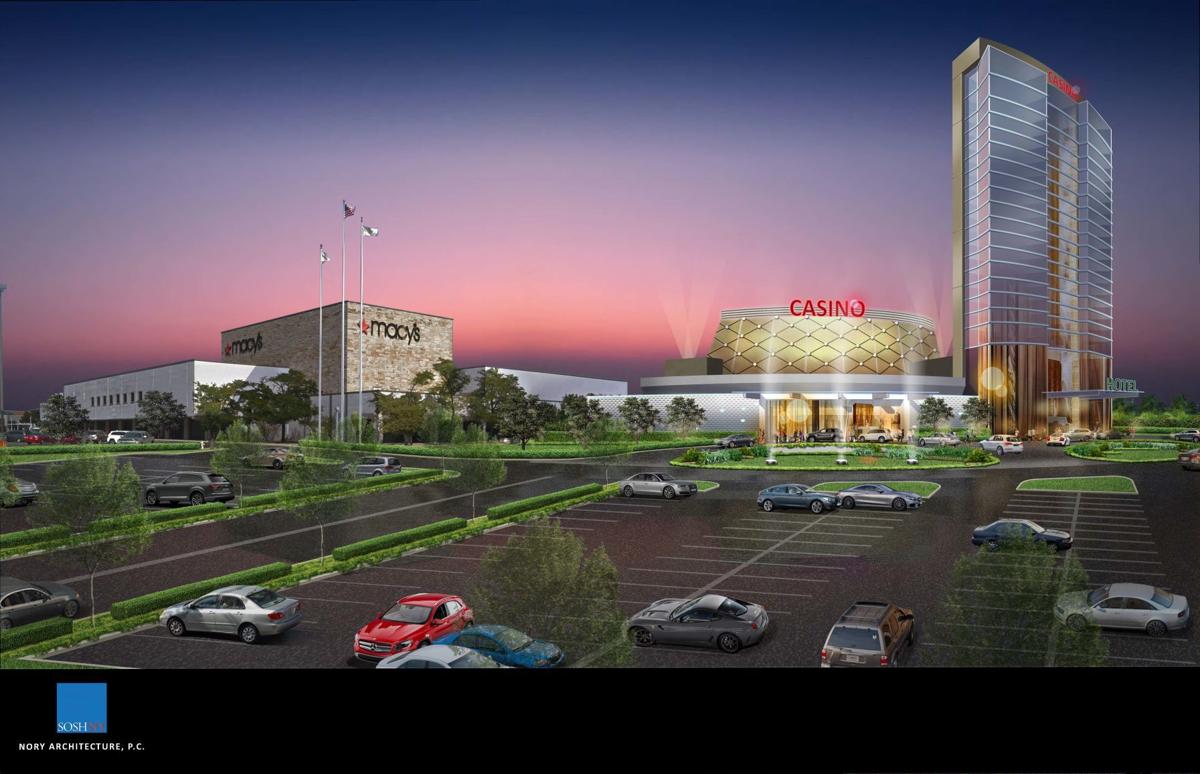 The proposed Southland Live Casino would be located at River Oaks Center in Calumet City, less than two miles from the Indiana border. 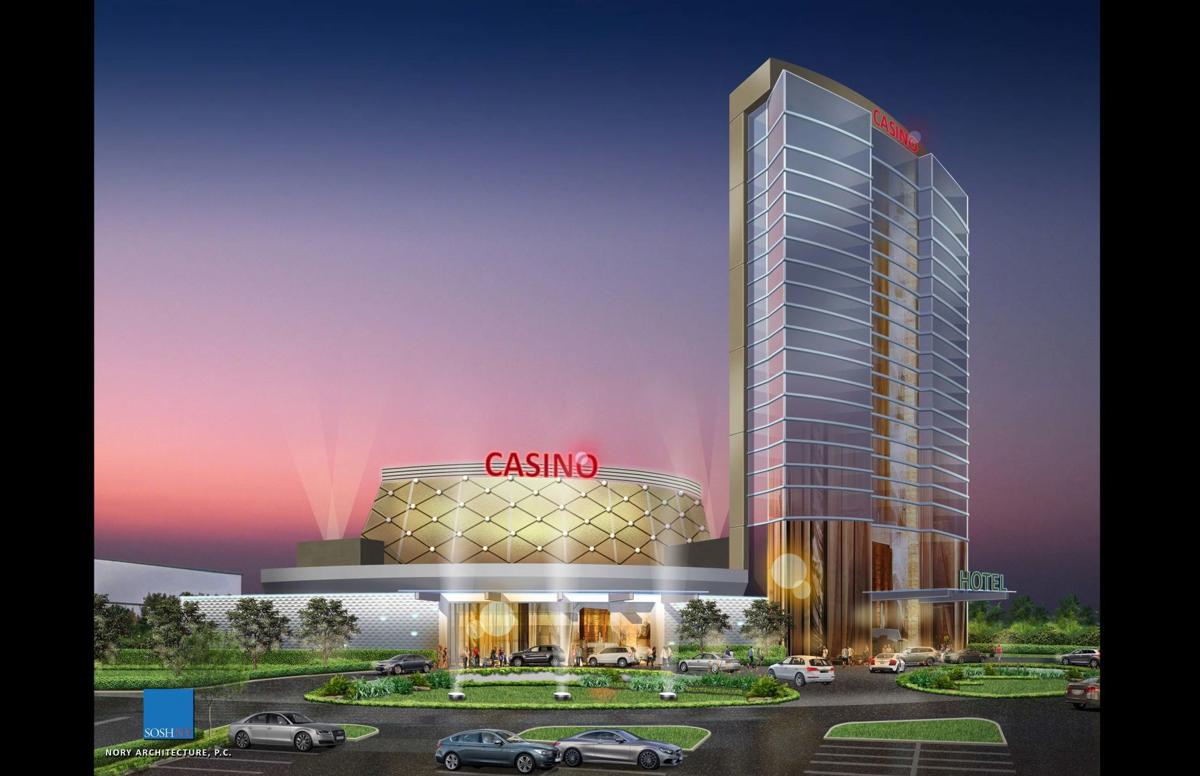 The proposed Southland Live Casino in Calumet City would be built in two stages: a casino to start, followed by a 200-room, 18-floor hotel three years later. 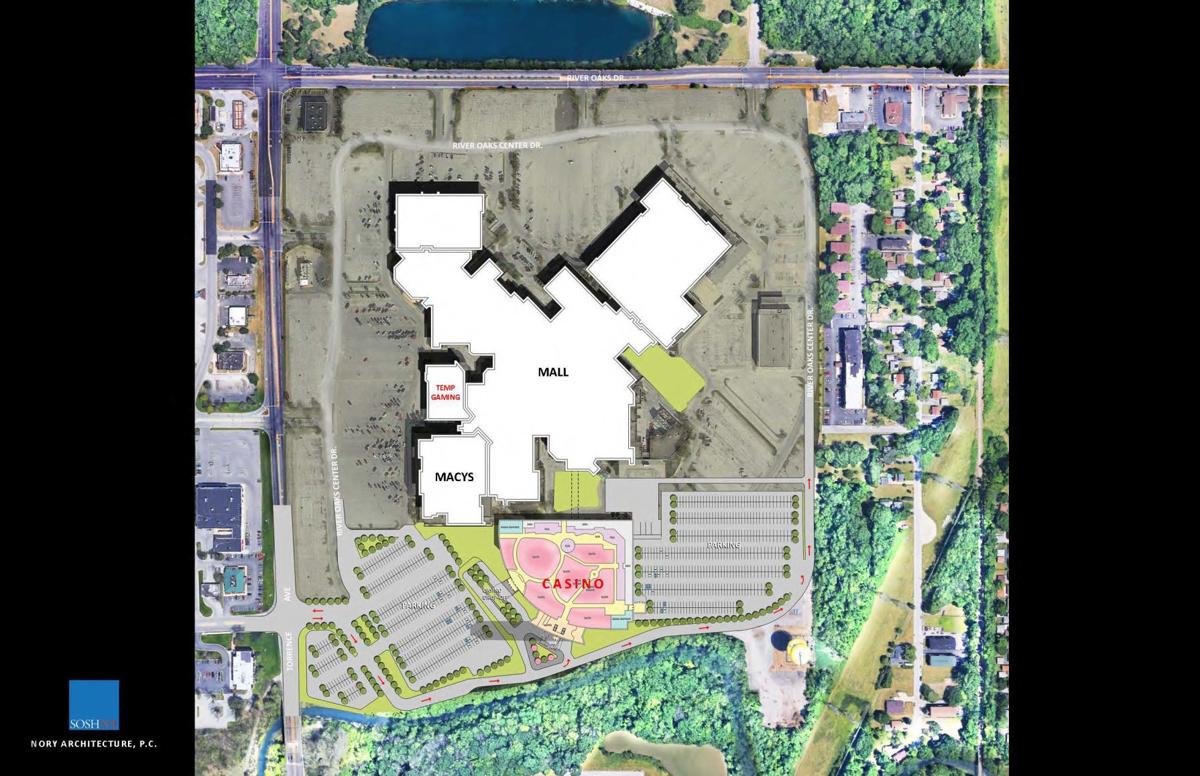 CALUMET CITY — The latest entry in the south suburban casino sweepstakes aims to put a new gaming facility less than two miles from the Indiana border at the River Oaks shopping center in Calumet City.

The plan calls for constructing a $275 million, 150,000-square-foot facility on a 20-acre site near Macy's at the southwest corner of the River Oaks Center, near 159th Street and Torrence Avenue.

Inside would be a casino with 1,200 slot machines and 35 table games — which would make it smaller than all five Northwest Indiana casinos — along with a music venue, restaurants and lounges.

An adjacent 200-room, 18-story hotel would be built three years after the Calumet City casino opens, according to the plans.

"River Oaks Center has been an economic anchor of the southeast suburbs for more than half a century, but it needs this exciting casino destination to bring it back to its former glory," said Timothy Hughes, Southland Live Casino project manager.

"Equally important, Southland Live Casino will fulfill a longstanding goal of establishing a south suburban casino to provide an economic infusion for a predominantly minority community."

Southland Live is among four casino proposals to so far win the approval of municipal leaders in various south suburbs ahead of the Oct. 28 deadline to submit plans to the Illinois Gaming Board.

Similar sized casinos with roughly matching amenities have been recommended by officials in Lynwood, Homewood/East Hazel Crest and Matteson. A separate plan to construct a horse racing track with slot machines also has been proposed for Tinley Park.

Following the deadline, the Illinois Gaming Board will have one year to determine the casino project to which it will award the one south suburban owner's license and one horse racing license authorized by Senate Bill 690.

Delaware North, which already operates the Jumer's Casino in Rock Island, Illinois, and oversees concessions at Chicago White Sox games, believes Southland Live is uniquely positioned near Interstates 94, 294 and 80 to attract gamblers from both Illinois and Indiana, and to spur redevelopment of the River Oaks area with a potential sports complex, convention center and parking garage.

"Southland Live will be a world-class entertainment destination unlike anything Illinois has seen while revitalizing an iconic location in the south suburbs," said Osi Imomoh, Delaware North regional general manager.

"We look forward to submitting our proposal and working closely with the Illinois Gaming Board once again to bring another successful casino operation to Illinois."

Calumet City narrowly lost its bid for an Illinois casino license in 2008 that ultimately went to the Rivers Casino in Des Plaines, which now is Illinois' highest grossing casino.

Should Southland Live win the license this time, Delaware North said it's prepared within 90 days to open a temporary gaming facility in the vacant Carson Pirie Scott store at River Oaks Center to start generating revenue immediately, create 300 temporary jobs and give visitors a taste of the experience to come.

The new Hard Rock Casino Gary may be just the first of several casinos to open in the years ahead within or very near to Northwest Indiana.

Illinois lawmakers may need to go back to the drawing board if they are serious about putting a casino in the city of Chicago.

Have thoughts about a potential Chicago casino? Mayor Lori Lightfoot wants to hear them.

A fourth community is entering the competition for a license to open a new Illinois casino in south suburban Cook County.

The proposed Southland Live Casino would be located at River Oaks Center in Calumet City, less than two miles from the Indiana border.

The proposed Southland Live Casino in Calumet City would be built in two stages: a casino to start, followed by a 200-room, 18-floor hotel three years later.