The competition between the Horseshoe Casino and the Hard Rock Casino for Northwest Indiana gaming market dominance is not letting up.

Data released Friday by the Indiana Gaming Commission (IGC) shows the Hard Rock in August outpaced the Horseshoe in table game play for the second consecutive month, while the Horseshoe maintained its top statewide spot for total "win," or revenue after paying successful bettors.

There's no question the Hard Rock Casino Northern Indiana has become the premier destination for table games — especially baccarat — since opening its doors to the public May 14.

According to the IGC, Hard Rock visitors wagered $42.3 million on table games in August at the new Gary casino located adjacent to Interstate 80/94 at the Burr Street exit.

That was more than any other casino in the Hoosier State and just shy of the combined table games drop at the five southern Indiana casinos located on the Ohio River.

The $23.4 million wagered on baccarat at the Hard Rock comprised 55% of its table game play and contributed a similar share to the Hard Rock's state-leading total table game win of $9.3 million in August, according to the IGC.

"We are very happy with our August results," said Matt Schuffert, president of the Hard Rock Casino Northern Indiana.

"Despite August typically being a slower month than July, we surpassed $30 million in gaming revenue and have clearly become the overall table games leader in the state of Indiana, led by our strong baccarat play."

According to the IGC, August patrons deposited $248.2 million in the Horseshoe's 1,974 slot machines, generating $24.9 million in win for the casino.

Altogether, the four Northwest Indiana casinos generated 46.4% of the state's $209.3 million in total win from its 12 casinos in August, led by the the Horseshoe with $33.3 million, Hard Rock at $30.2 million, East Chicago's Ameristar Casino with $21.5 million, and the Blue Chip Casino in Michigan City at $12.1 million.

That was a 10.9% increase compared to Indiana's $194.5 million July sports wagering handle, and 27.6% more money bet in Indiana on professional and collegiate sports than August 2020, records show. 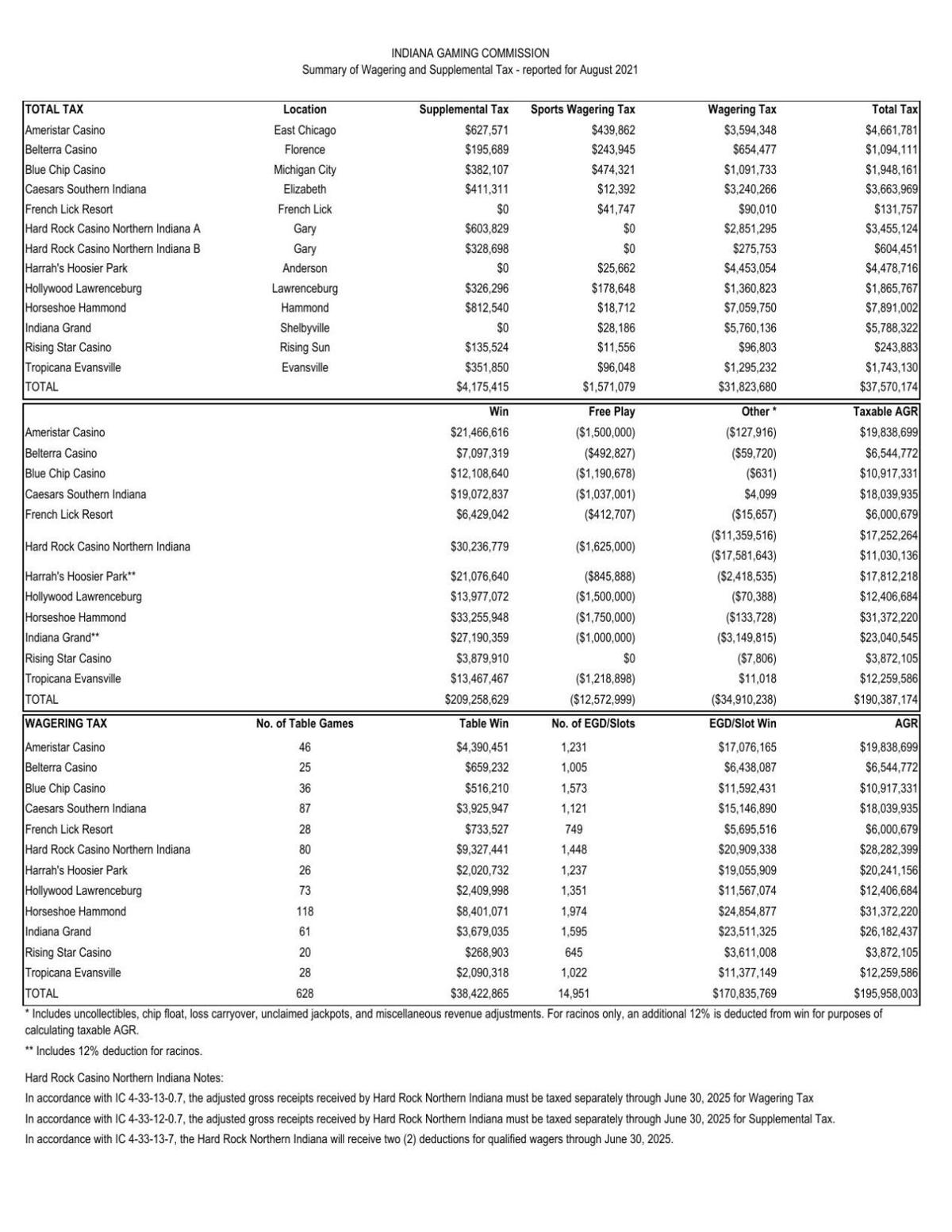 "These funds will go a long way to help us provide much needed services to people in our area who are struggling," said Captain Brian Clark, Lake County Salvation Army coordinator.

The new Caesars Sportsbook app enables individuals in Indiana age 21 and up to use a mobile device to bet on hundreds of professional and college sporting events without having to visit a casino.

The Indiana Gaming Commission voted 4-1 Thursday to rescind its prior orders for Caesars Entertainment to sell the Horseshoe Casino in Hammond to a new operator by the end of this year.

An incredible $355.4 million was wagered in Indiana on sporting events in September, according to the Indiana Gaming Commission. The previous record, from January 2021, was $348.2 million.