The Hoosier State broke another monthly sports wagering record in November even as the money bet at slot machines and table games declined compared to October at every casino in the state, except the Hammond Horseshoe.

The new top mark for Indiana sports wagers in a single month is $251.4 million, shattering the prior record of $230.9 million — just set in October — by nearly 9%, according to data released Thursday by the Indiana Gaming Commission.

Records show football bets accounted for nearly half the monthly handle in November, likely due to unusually strong seasons by Notre Dame and Indiana University, as well as the NFL's Indianapolis Colts.

"There really isn't any substitute in sports betting for a local team doing well, and Indiana is enjoying three at once," said Dustin Gouker, lead analyst for PlayIndiana.com.

"And with both college and NBA basketball returning — a sport that enjoys particular interest in Indiana compared with most other legal jurisdictions — December really sets up to be another jump forward."

A whopping 41% of the statewide sports wagering handle was bet at East Chicago's Ameristar Casino, primarily through its affiliated DraftKings online sports book.

The Blue Chip Casino in Michigan City captured 26% of the Indiana market in November, mostly through its association with the FanDuel online sports book.

Altogether, online and mobile sports wagers accounted for 85% of the total bets placed last month, up from 83% in October, data show.

Indiana also outpaced Colorado to reclaim its spot as the fifth-largest sports wagering market in the United States, behind only New Jersey, Nevada, Pennsylvania and Illinois.

"I think some of the worries that Indiana would slip as its neighbors legalized sports betting are calming," said Jessica Welman, analyst for PlayIndiana.com. "The market in the Hoosier State is proving to be quite dynamic."

Things were less dynamic last month inside most Indiana casinos as increased COVID-19 safety precautions and new limits on entertainment, bars and restaurants dropped the statewide casino "win," or revenue after paying successful bettors, to $148.2 million.

That was an 11% decline compared to October, which was down 2% compared to September, and a year-over-year drop of nearly 17%.

The statewide results would have been even worse except the Horseshoe Casino in Hammond increased its monthly win by 17.5% in November compared to October, with nearly double the amount of money wagered on blackjack.

Steven Cox, Horseshoe vice president of finance, attributed the increase in part to "big VIP play" from individuals who like the odds at the Hammond casino, along with the casino's ability to accommodate them in private rooms.

"Ever since this property became a Horseshoe we've been known for the biggest odds and the highest limits, and I will say we continue to take that big action here," Cox said.

At the same time, Cox explained the Horseshoe is striving to ensure each of the three seats permitted at blackjack tables under COVID-19 social distancing guidelines always are filled at all 38 tables in the casino.

"We have done our best to get as many dealers out there and tables open as we can so that we can make sure every guest has a place to play," Cox said. "There's nothing more frustrating than waiting for a table to open."

November win at other Northwest Indiana casinos declined compared to October by 20% at Gary's Majestic Star casinos, 18% at Blue Chip, and 12% at Ameristar, according to Indiana Gaming Commission data. 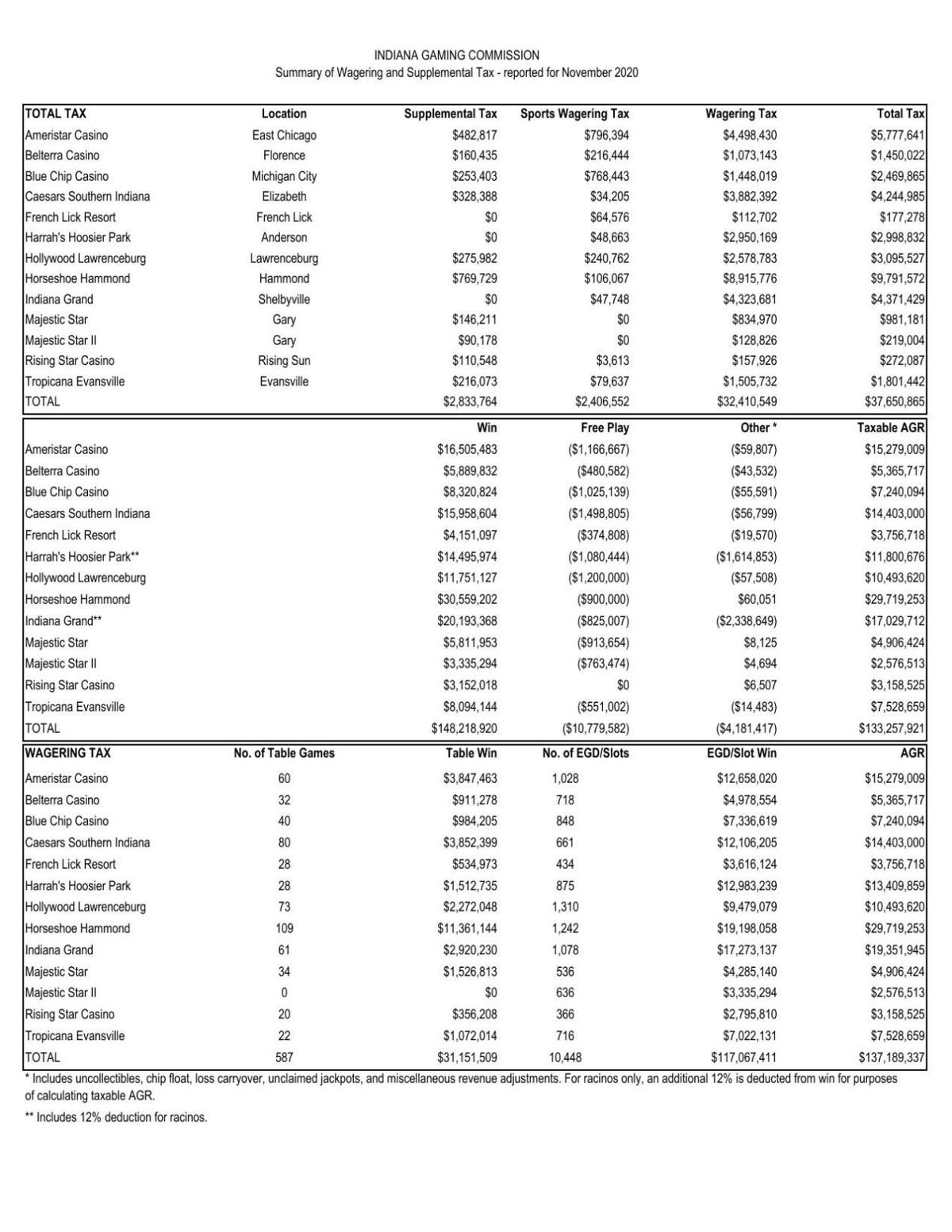 The Indiana Gaming Commission unanimously agreed Monday to give Caesars Entertainment Inc. one additional year to sell the Horseshoe Casino in Hammond.

The Horseshoe Casino in Hammond is likely to remain part of the Caesars gaming empire for at least one additional year.

Nearly a quarter-billion dollars was legally wagered in Indiana last month on the outcome of professional and collegiate sporting events — a new all-time high.

The sportsbook at the entrance to the Ameristar Casino will be remodeled and rebranded in December as the Barstool Sportsbook.

The remodeled sports book at the East Chicago casino entrance will open to the public Thursday, pending any final regulatory approvals.

Hoosiers wagered an astounding $313 million on professional and college sporting events in December.

Poker could be back at the Horseshoe Casino in Hammond by the end of March.