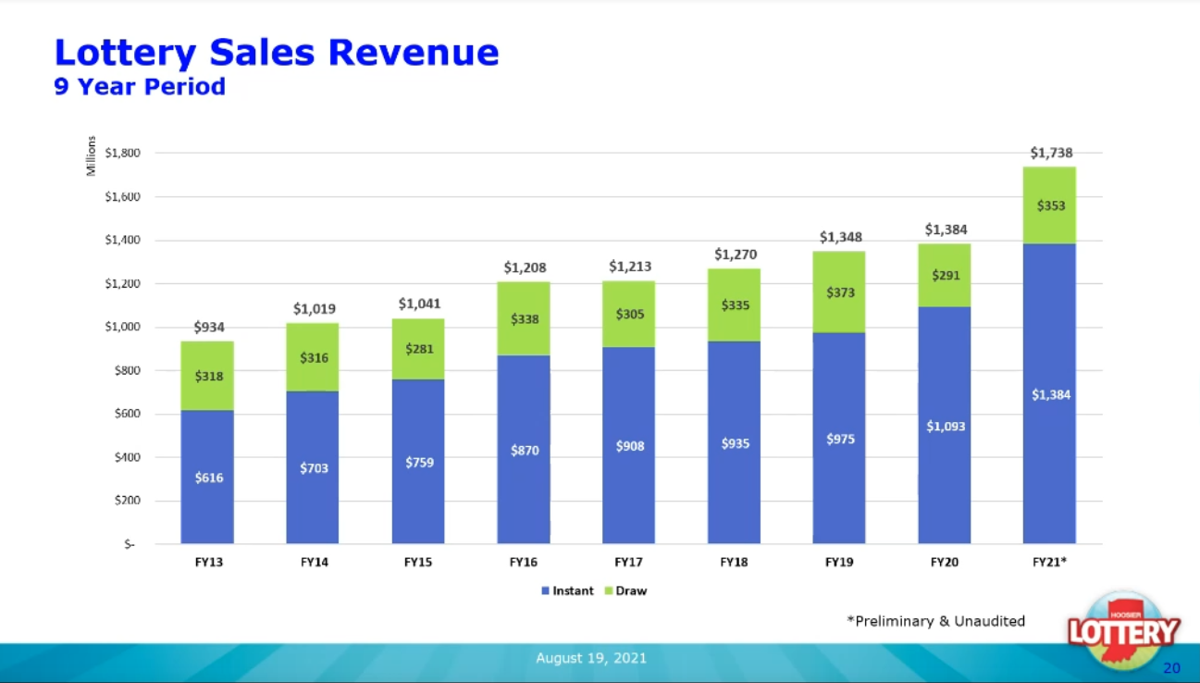 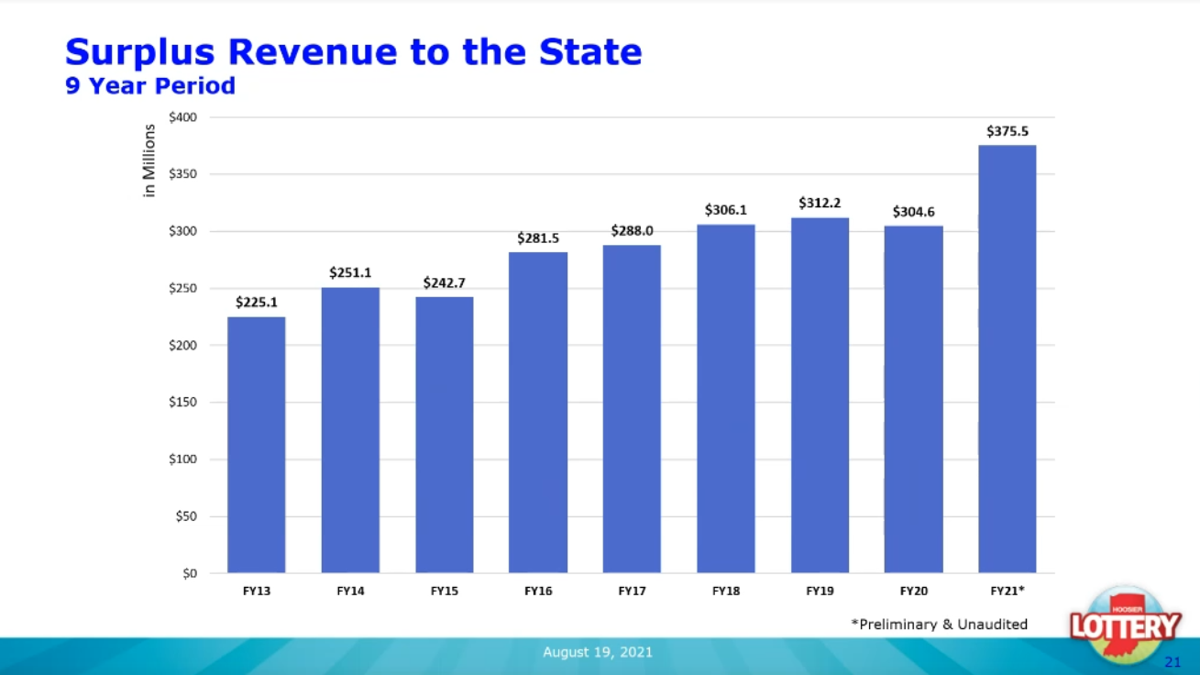 The Hoosier Lottery generated a record $375.5 million in revenue for the state during the 2021 budget year. Lottery profits are deposited in Indiana's General Fund that pays for nearly all state spending, including education, public safety and health care, while a portion of the lottery's profits also directly support state pension funds for Hoosier police, firefighters and teachers.

What do Hoosiers do for entertainment when their usual outlets are limited or shuttered because of the ongoing COVID-19 pandemic?

The scratch game growth is in line with the lottery’s long-term strategy to attract more players enticed by the regular release of new instant games, instead of relying on the substantial revenue occasionally generated by casual players buying a few tickets when Powerball or MegaMillions jackpots approach or exceed $500 million.

“These are really extraordinary numbers,” said William Zielke, lottery commission chairman. “It certainly reflects the efforts of a lot of people who tried to keep it going (through the pandemic).”

Another $174.3 million went toward purchasing non-jackpot draw games, such as Daily 3 and Daily 4, Quick Draw, and Cash 5.

Altogether, a total of $1.14 billion of last year’s lottery revenue, or 66%, was returned to players as prize winnings, according to the Hoosier Lottery.

After deducting various expenses, include retailer commissions, the Hoosier Lottery recorded an operating profit of $393 million for the 2021 budget year, along with $2 million in miscellaneous earnings.

That was well above the $316 million needed for IGT Indiana, the lottery’s sales and marketing operator, to earn an incentive payment under the revised lottery privatization contract inked in 2015 under former Republican Gov. Mike Pence.

As a result, IGT Indiana was paid a $19.5 million bonus, leaving $375.5 million in lottery revenue for the state — another new record.

By law, Hoosier Lottery profits are deposited in Indiana’s General Fund that pays for nearly all state spending, including education, public safety and health care.

Winning lottery ticket worth more than $500,000 sold in Hobart

A winning CA$H 5 lottery ticket worth $524,271 was purchased for Monday's drawing at Lake George Marathon in Hobart.

Stilianos Kyriakakis told the Hoosier Lottery he plans to share his $1 million Powerball prize with his two children.

A group of coworkers at Bulk Equipment Corp. are enjoying life with a few extra bucks in their pockets after winning a $50,000 Powerball prize through the Hoosier Lottery.

The Hoosier Lottery recently presented the three owners of RA Foods, 1201 Chicago Ave., Hammond, a check for $10,840 for selling the CA$H 5 ticket that won the game’s top prize.

The Hoosier Lottery announced Tuesday that a winning CA$H 5 ticket worth $1.1 million was purchased for Sunday's drawing at Speedway, 2101 E. Commercial Ave., Lowell.

The Hoosier Lottery sold more than $1 billion in scratch-off tickets between July 2019 and June 2020, a new record.

The leader of Indiana's Hoosier Lottery recently was named board president of the organization that oversees the big jackpot Powerball draw game.

Lottery players in Indiana, and across the country, now have a third opportunity each week to become a multimillionaire by hitting the Powerball jackpot.

Could you use an extra half-billion dollars heading into the holidays?

Six Northwest Indiana police officers are being recognized by the state as "Traffic Safety All-Stars" for their ongoing efforts to save lives by consistently stopping impaired drivers.

The Hoosier Lottery announced Monday that a ticket sold for the Saturday night Powerball drawing matched four of the five white balls and the red Powerball to win the game's third-highest prize.

The Hoosier Lottery sold $565.8 million in tickets between July and October. That was $45 million (8.7%) greater than the same four-month period last year.

The Hoosier Lottery generated a record $375.5 million in revenue for the state during the 2021 budget year. Lottery profits are deposited in Indiana's General Fund that pays for nearly all state spending, including education, public safety and health care, while a portion of the lottery's profits also directly support state pension funds for Hoosier police, firefighters and teachers.