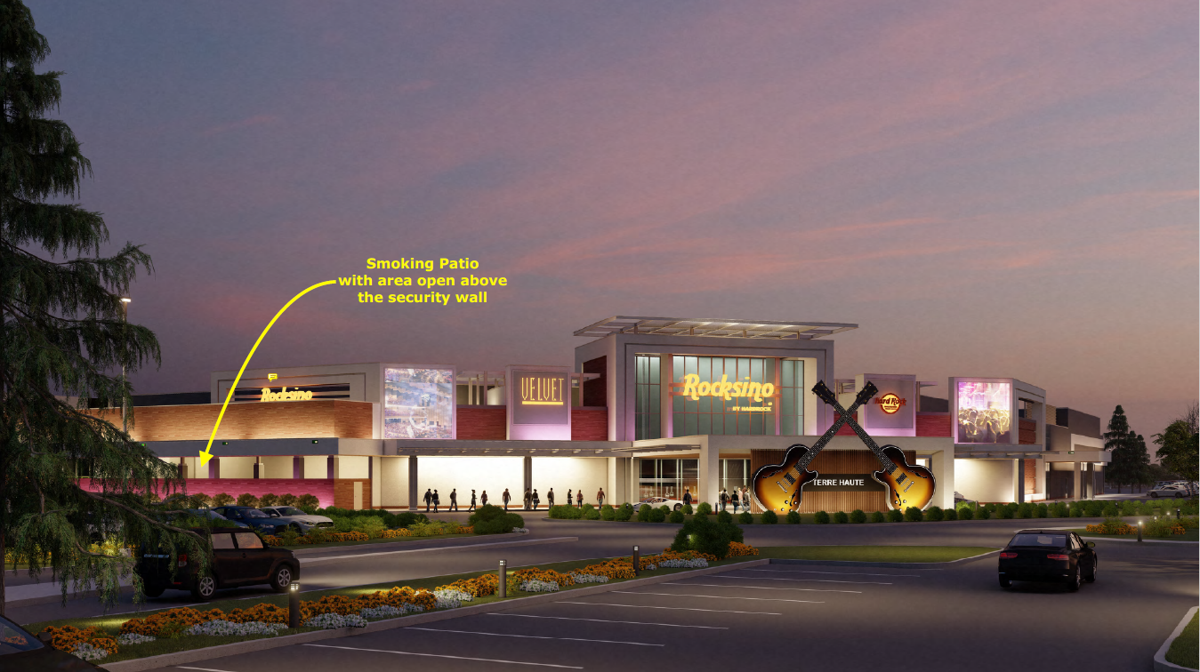 This rendering of the Terre Haute Rocksino, set to begin construction in coming months, shows where an outdoor smoking patio, with slot machines and table games, will be located. The casino will be the first in Indiana to permanently prohibit indoor smoking. 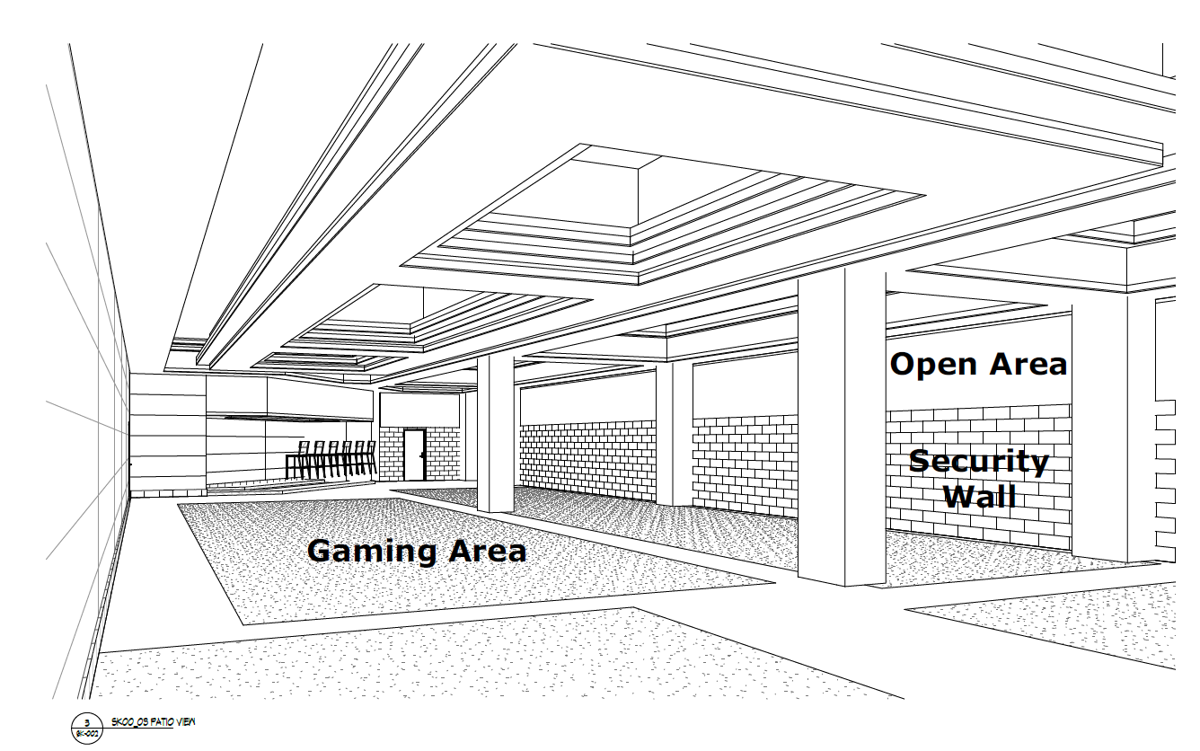 The heated smoking patio at the Terre Haute Rocksino will be open to the outdoors and include up to 117 slot machines and eight table games, or 15% of the 1,060 planned total gaming positions at the casino.

The new casino set to begin construction this year in Terre Haute will be Indiana's first to permanently prohibit indoor smoking when it opens next September.

Spectacle Jack LLC, parent company of the music-themed Rocksino, announced Friday it will not seek to change the strict anti-smoking ordinances in Terre Haute and Vigo County, and instead will comply with them in an effort to improve the overall health of west-central Indiana residents.

"Recognizing we had to make a good business decision for the company to maintain a solid financial ground for the future and provide a welcoming entertainment facility for all Hoosiers and guests, we had to look at data, become creative and benchmark other facilities which were successful with this model," said Greg Gibson, Spectacle Jack CEO.

To that end, Spectacle Jack and its operating partner, Hard Rock International, plan to accommodate smokers by constructing a heated outdoor patio at the casino that will include up to 117 slot machines and eight table games, or 15% of the casino's 1,060 planned gaming positions.

The smoking patio also will feature large ceiling fans to circulate the patio's air, exhaust fans to discharge cigarette smoke and openings above a security wall to bring in fresh air from outdoors.

"It is extremely important to Hard Rock International that each and every guest that enters the Rocksino feels welcome," said Jon Lucas, Hard Rock CEO.

"Our brand represents the best in the gaming industry, and we do that through safety, customer service and being receptive to the needs of our guests. We look forward to the future in Terre Haute."

The American Lung Association applauded the decision to prohibit smoking inside the new Terre Haute casino.

"Almost 15 years ago, the U.S. Surgeon General concluded there is no safe level of exposure to secondhand smoke and that eliminating smoking in indoor spaces is the only way to fully protect people from exposure," said Nick Torres, Lung Association advocacy director.

"Everyone deserves the chance to lead a healthy life, and that means having a safe work environment free from the health harms associated with secondhand smoke."

Hard Rock International separately is partnering with the similarly named, but distinct, Spectacle Entertainment to operate the Hard Rock Casino Northern Indiana, currently under construction adjacent to the Borman Expressway at Burr Street in Gary.

Plans for the new Gary casino include a nonsmoking gaming area. But smoking still would be permitted in most areas of the facility.

Smoking temporarily is barred at the Four Winds tribal casino in South Bend, and generally limited at Indiana's 13 state-regulated casinos, due to the COVID-19 pandemic.

Indoor smoking is prohibited at all Illinois casinos.

$50,000 at stake as winning lottery ticket sold in Region is set to expire

A winning Powerball lottery ticket sold in Northwest Indiana and worth $50,000 will expire if the prize is not claimed by Nov. 5.

The Republican-controlled Indiana House has voted to increase the state's cigarette tax by 50 cents per pack and impose a new 10% sales tax surcharge on vaping products. The bill now heads to the Senate.

This rendering of the Terre Haute Rocksino, set to begin construction in coming months, shows where an outdoor smoking patio, with slot machines and table games, will be located. The casino will be the first in Indiana to permanently prohibit indoor smoking.

The heated smoking patio at the Terre Haute Rocksino will be open to the outdoors and include up to 117 slot machines and eight table games, or 15% of the 1,060 planned total gaming positions at the casino.