The parent company of the Hard Rock Casino Northern Indiana has until July 23 to get its house in order to avoid potentially being subject to the one of the severest actions available to the Indiana Gaming Commission.

"The fundamental basics of a casino company are not present," said Sara Tait, IGC executive director.

At the same time, the Hard Rock Casino is open and operating in Gary thanks to Spectacle's management agreement with Hard Rock International, which also owns a portion of the Gary casino separate from Spectacle.

That spurred the IGC on Thursday to postpone addressing Spectacle's deficiencies by taking action against the Gary casino owner's license, since a casino cannot operate in Indiana without a valid IGC license.

Instead, the IGC agreed the Hard Rock Casino should continue operating on an interim license renewal while Spectacle works to come into compliance with IGC standards.

"If we were forced to act on this matter today, I don't think it would be a good outcome based on what we've heard from staff and from the commissioners," said Michael McMains, IGC chairman.

The IGC demonstrated that's no idle threat by unanimously voting to deny a casino owner's license renewal for Lucy Luck Gaming, which was developing a Terre Haute casino and has many of the same investors as Spectacle, including majority shareholder Greg Gibson.

Tait said the lack of visible progress toward constructing a Terre Haute casino some 13 months after the license initially was awarded to Lucy Luck, along with the same structural deficiencies present at Spectacle and questionable financing for the Terre Haute casino, led IGC staff to recommend nonrenewal.

That puts a temporary halt to Lucy Luck's plans to contract with Hard Rock to develop and manage a $170 million "Rocksino" casino in Terre Haute with 850 slot machines and 35 table games — or about half the gaming positions as the Gary casino — along with a steakhouse, Hard Rock Cafe, food hall, and a 250-seat venue for live performances and other events.

The IGC agreed to reopen applications for the Terre Haute casino license for a 90-day period. Tait said Lucy Luck is eligible to reapply, along with any other casino company interested in constructing and operating a casino in accordance with IGC standards.

Gibson said he's not certain Lucy Luck will try again for the Terre Haute license. Though he said he takes solace in having accomplished his original goal of bringing a gaming license to Vigo County.

"It truly saddens me to know that the Terre Haute license will be open for a bidding process amongst companies who will be interested in the project solely for monetary gain, and with companies who don't know our community like Lucy Luck does," Gibson said.

"For me, this project has always been about Terre Haute; it’s been about my home community. Terre Haute deserves this casino, and I wish it could be alongside Lucy Luck Gaming."

Otherwise, Lucas is satisfied with the new Gary casino that opened to the public May 14 adjacent to the Borman Expressway at Burr Street with 1,400 employees on the job, strong gaming revenue, more than 100,000 people served at the casino's five restaurants and multiple bars, significant loyalty program signups, and more than $100,000 donated to Region nonprofit organizations since opening.

Going forward, Lucas projected the retail sports book at the Gary casino will open in early August adjacent to the Hard Rock Cafe, and entertainment in the 1,950-seat Hard Rock Live performance venue should begin around Labor Day.

"We feel that this is going in the right direction," Lucas said.

The Hard Rock Casino operates on one of the two casino owner's licenses formerly assigned to Gary by the Indiana General Assembly that were deployed for the past 25 years at the two Majestic Star casino boats at Buffington Harbor on Lake Michigan. 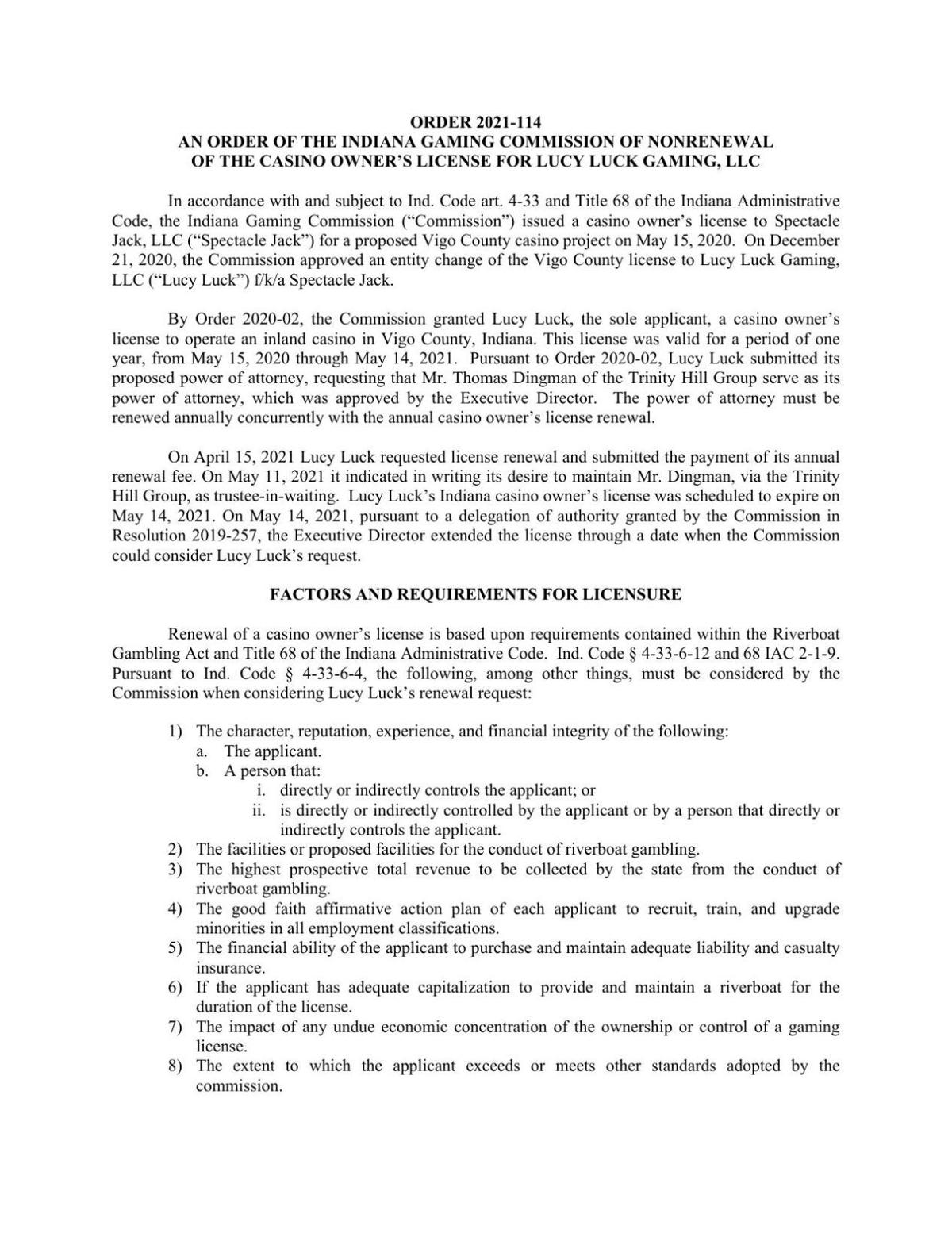 "We are extremely pleased with the level of business we experienced in the 18 days we were open in May. Guest feedback has been very positive, and we look forward to continued growth," said Hard Rock President Matt Schuffert.

Northwest Indiana casino patrons no longer are required to wear a face mask inside gaming facilities following the sharp reduction in COVID-19 cases across the Region.