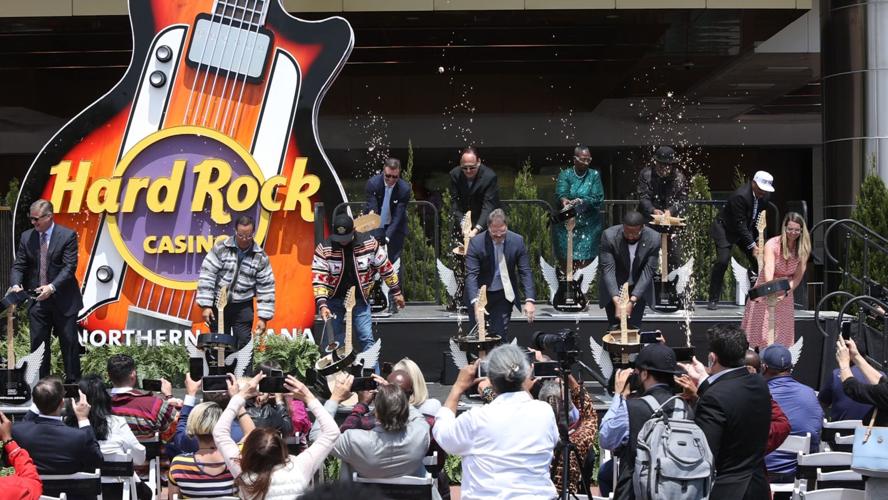 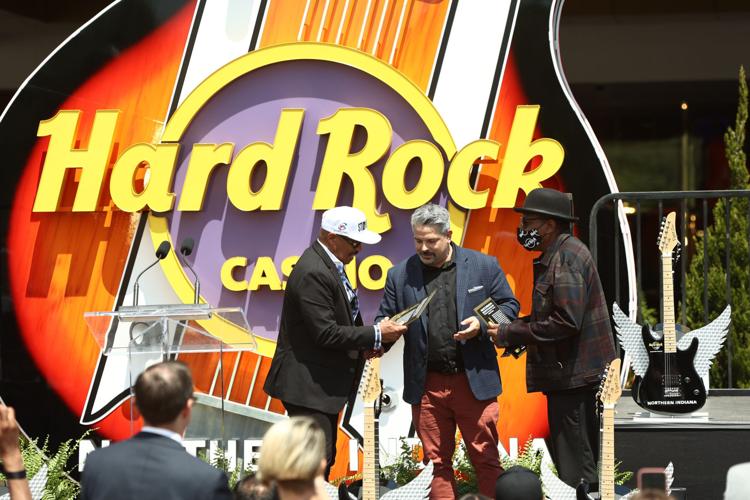 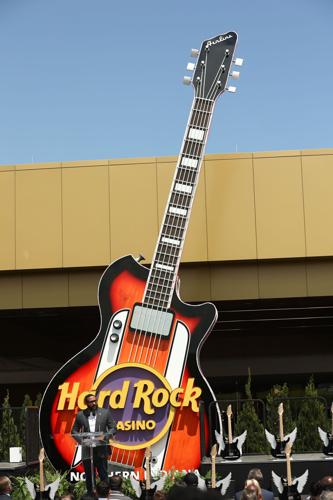 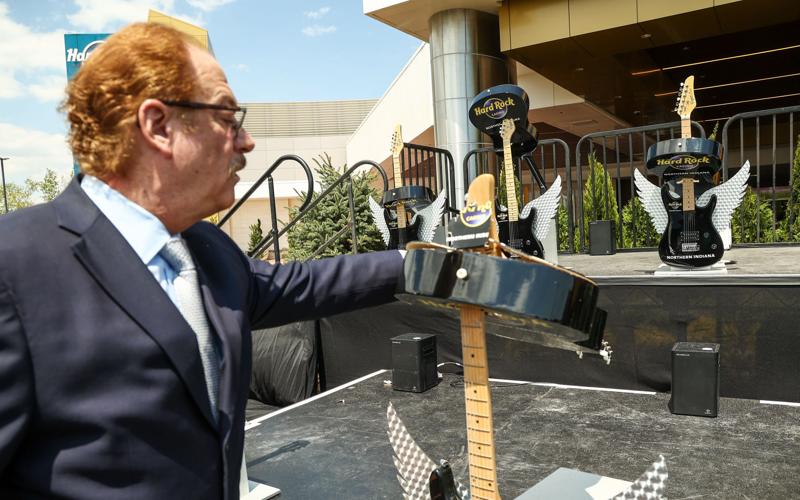 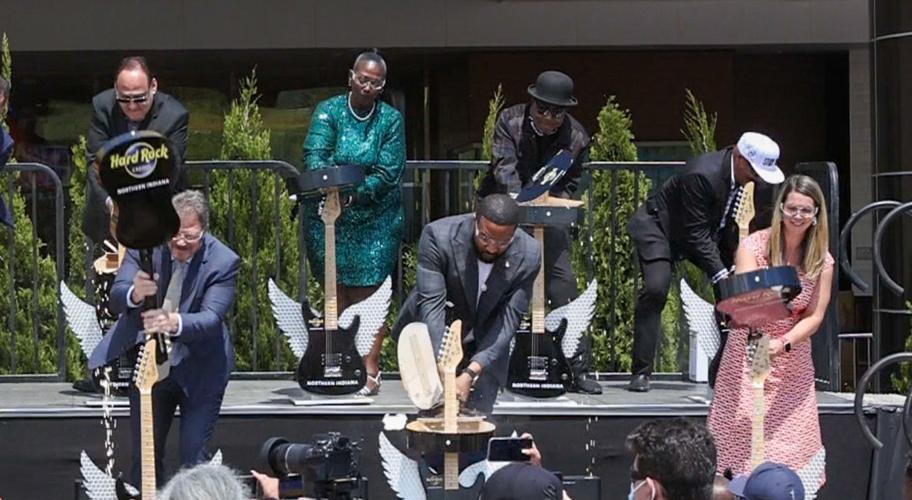 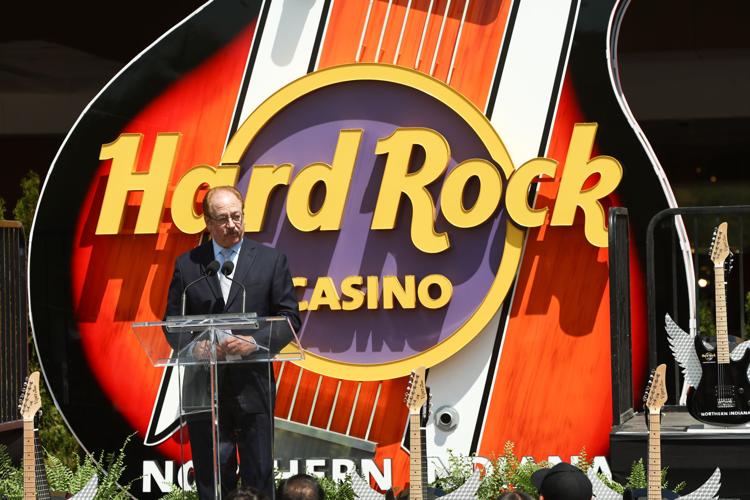 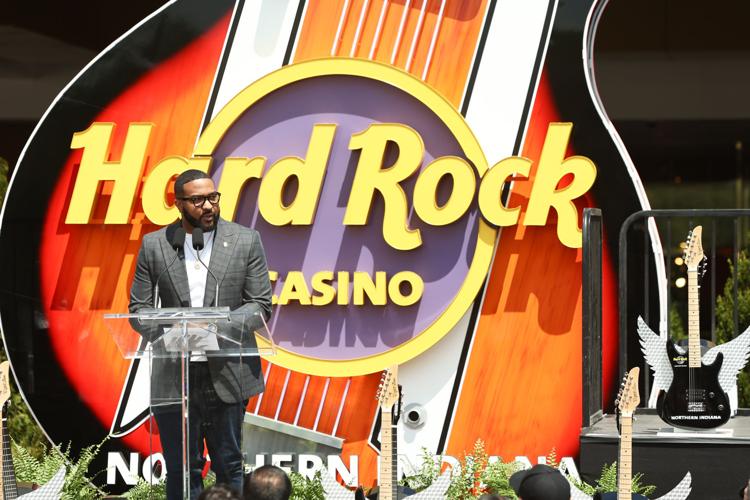 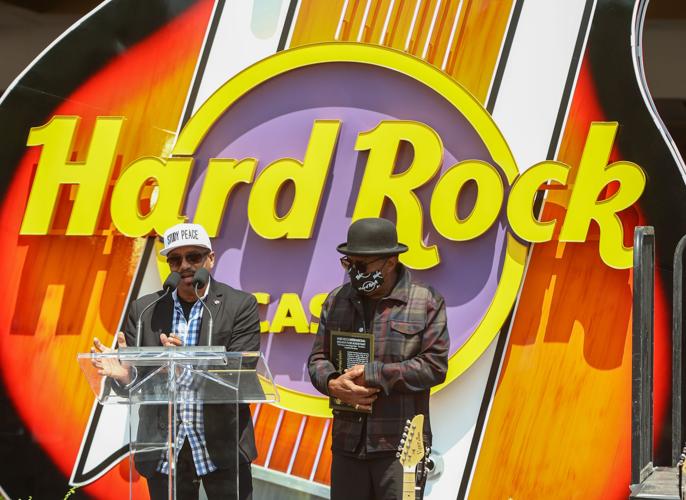 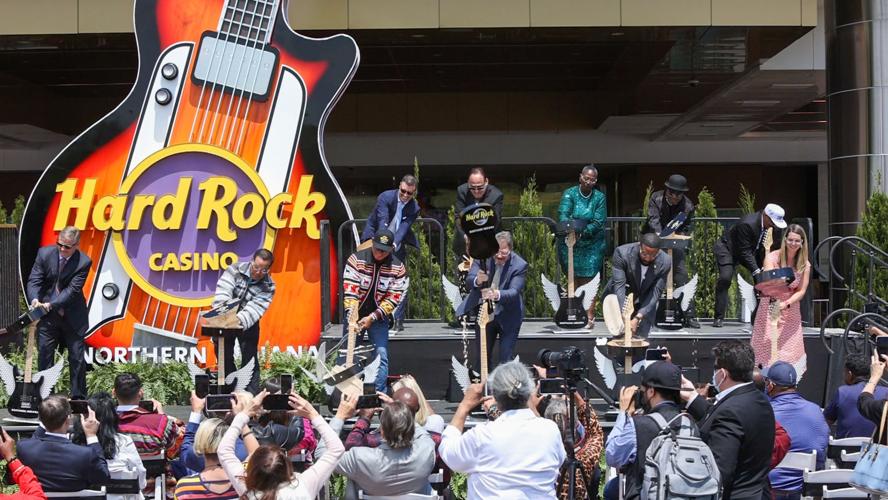 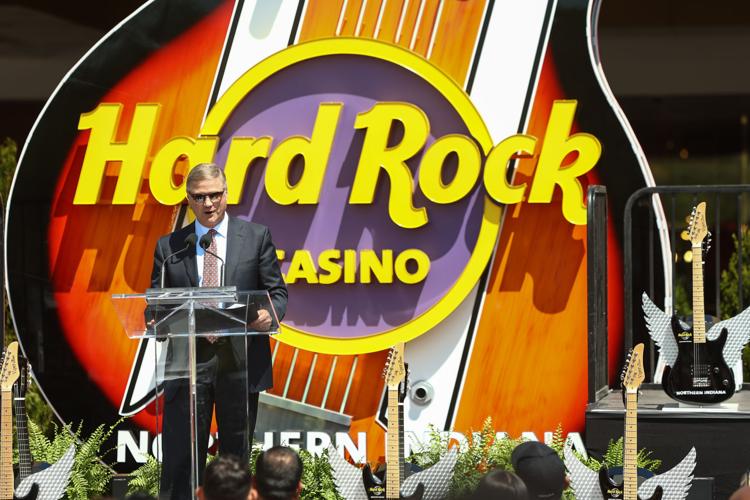 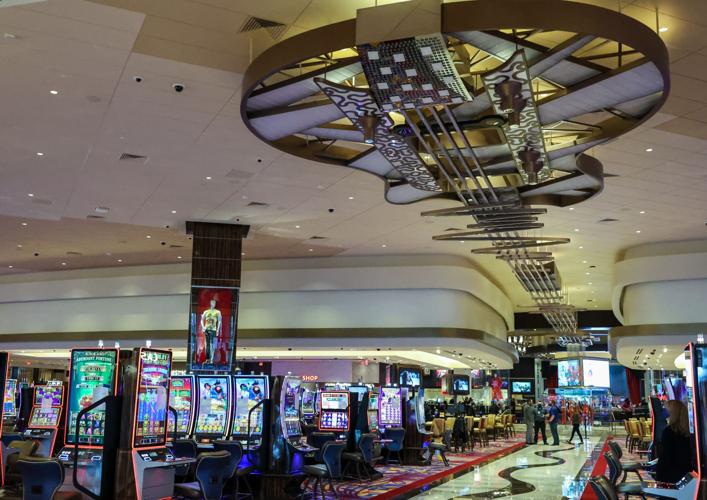 The entrance to the Hard Rock Casino in Gary features a guitar symbolizing the careers of the Jackson family.

GARY — The show that never ends officially has begun.

The Hard Rock Casino Northern Indiana opened its doors to the public Friday, more than 20 years after former state Sen. Earline Rogers, D-Gary, first proposed land-based gaming in the Steel City, and some 16 months after construction started adjacent to eastbound Interstate 80/94 at the Burr Street exit.

In an only-at-Hard Rock touch, the opening was marked by some two dozen casino officials, local dignitaries, and musicians smashing logo-emblazoned guitars in front of a wall of ground sparkler fireworks with Fall Out Boy's "Light 'Em Up" booming on the sound system.

The $300 million entertainment destination includes a casino with some 1,600 slot machines and 80 table games, five restaurants, including a Hard Rock Cafe, a 1,954-seat Hard Rock Live performance venue and an on-site sports book and gift shop.

It replaces the Majestic Star Casinos that operated on Lake Michigan from Gary's Buffington Harbor for the past 25 years. It's also the first land-based commercial casino in Indiana built away from its former dockside location.

"This is what the Legislature envisioned when it passed the Riverboat Gambling Act — additional revenues to the state and to the local community, the creation of jobs, economic development and tourism," said Sara Tait, Indiana Gaming Commission executive director.

The Hard Rock Casino employs approximately 1,200 workers across the property, and Lucas pledged the new casino will prioritize  spending its money with Gary and Northwest Indiana companies just as it did throughout the construction process.

"We will continue, as we operate this facility, to help to cultivate and build local partnerships and help the local vendors be able to provide services and products for us. That's a commitment that we have as a company as we go into local communities, and it will be no different here in Gary," Lucas said.

Indeed, the economic development and employment possibilities in Gary made possible thanks to the Hard Rock were on the minds of many as officials spoke in front of the new casino's 37-foot tall guitar marquee on a brilliantly sunny spring morning.

"Today is a special day. A day that we will never forget. A day that puts Gary on a new course of economic growth and endless opportunities," said state Sen. Eddie Melton, D-Gary, a key proponent of the 2019 Indiana law authorizing the Gary casino relocation.

"This is going to be a beneficial project for the entire city of Gary. We're going from one of the state's lowest revenue-generating casinos at Buffington Harbor to a location with more than 200,000 cars a day (passing by)."

Inside the casino, hundreds of pieces of music memorabilia — most with connections to Gary — line the walls and fill glass cases, including a museum-quality display of items connected to the Jackson family that first achieved international superstardom in the 1960s from a tiny house at 2300 Jackson St. in Gary.

Tito and Marlon Jackson were on hand for the casino opening guitar smash just as they were at the Jan. 9, 2020, groundbreaking.

During the event, Gary Mayor Jerome Prince presented the Jackson brothers a key to the city of Gary in recognition of their continuing love and support for their hometown, perhaps most enthusiastically captured in the 1971 Jackson 5 hit, "Goin' Back to Indiana."

"I'm proud of my city Gary, Indiana," Tito Jackson said. "Being raised here, starting our musical journey here, going to school here, everything about the Jackson 5 and the Jackson family was rooted right here in Gary, Indiana."

He said the new casino is the start of Gary "doing the moonwalk back to success," while Marlon Jackson characterized Gary as a diamond in the rough, and added, "You're getting ready to get polished, baby."

The new casino is owned by an entity known as Spectacle Gary, which is a partnership between the privately held Spectacle Entertainment and Hard Rock International, a business enterprise of the Seminole Tribe of Florida. Hard Rock is the casino operator.

Greg Gibson, primary owner of Spectacle Entertainment, said he initially got into the casino business to bring a casino to his hometown of Terre Haute — a process now underway through Lucy Luck Gaming using a second casino license formerly assigned to Gary.

But Gibson said he's equally proud of his role in the economic transformation of Gary, and he's grateful to everyone whose hard work, past and present, made it possible.

"Northwest Indiana and the people of Gary have welcomed us with open arms from the beginning," Gibson said. "Gary, Indiana, this project belongs to you, and today we celebrate your success."

The Hard Rock Casino is open 24 hours a day, seven days a week. Guests, including restaurant patrons, must be at least 21 years old to enter.

Face masks must continue to be worn by all Indiana casino guests and employees until at least June 1 to minimize the potential spread of COVID-19.

An electronic version of the Barstool Sportsbook at the Ameristar Casino in East Chicago soon will be available to anyone in Indiana wanting to wager a few bucks on the outcome of sporting events.

Senate Democrats have a message for Indiana business owners struggling to find workers — pay more money. The state's minimum wage is $7.25 per hour. It hasn't been adjusted since 2009.

"We are extremely pleased with the level of business we experienced in the 18 days we were open in May. Guest feedback has been very positive, and we look forward to continued growth," said Hard Rock President Matt Schuffert.

The highest court in Indiana has been asked to decide a legal dispute over one of the smallest parcels of land sold at a Lake County tax sale.

A Phantom Fireworks store is unlikely to become part of Hammond's burgeoning retail district anchored by Cabela's and Wal-Mart on Indianapolis Boulevard.

Tax season is creeping up! How long experts say to keep your tax documents

Investing in stocks: Tips for getting started

Investing in stocks: Tips for getting started

How to crush a 'no spend' month

How to crush a 'no spend' month

The entrance to the Hard Rock Casino in Gary features a guitar symbolizing the careers of the Jackson family.