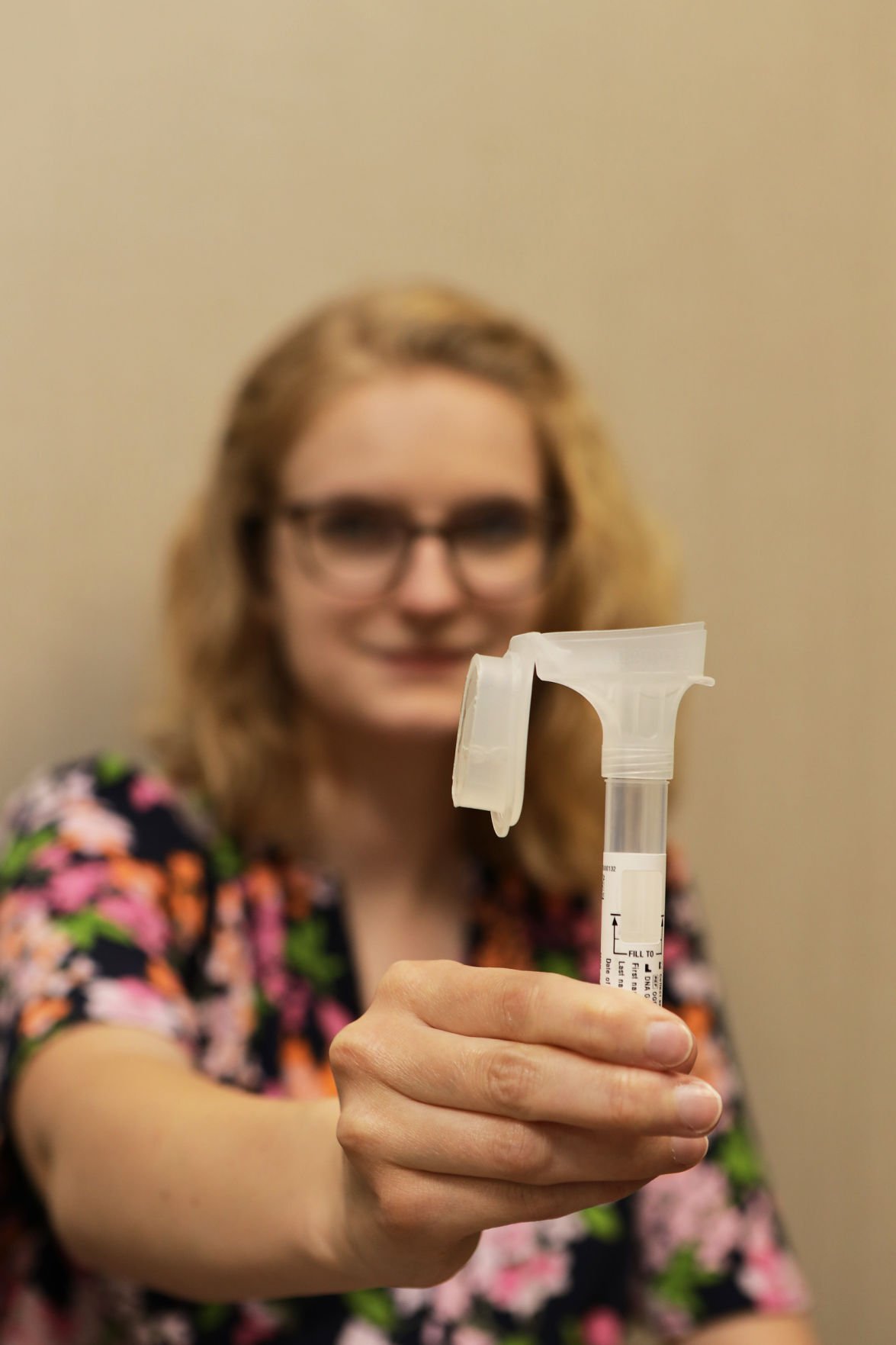 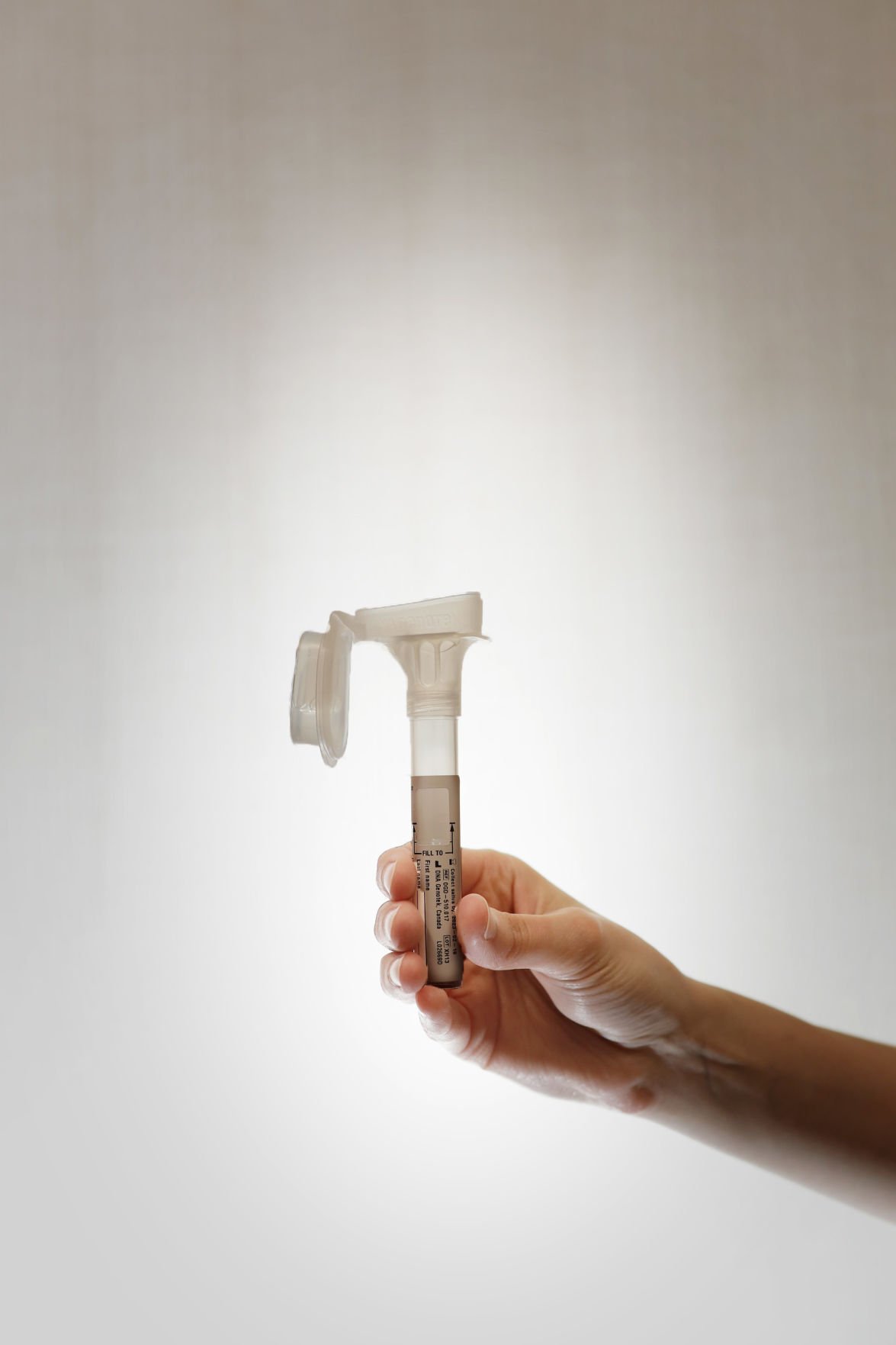 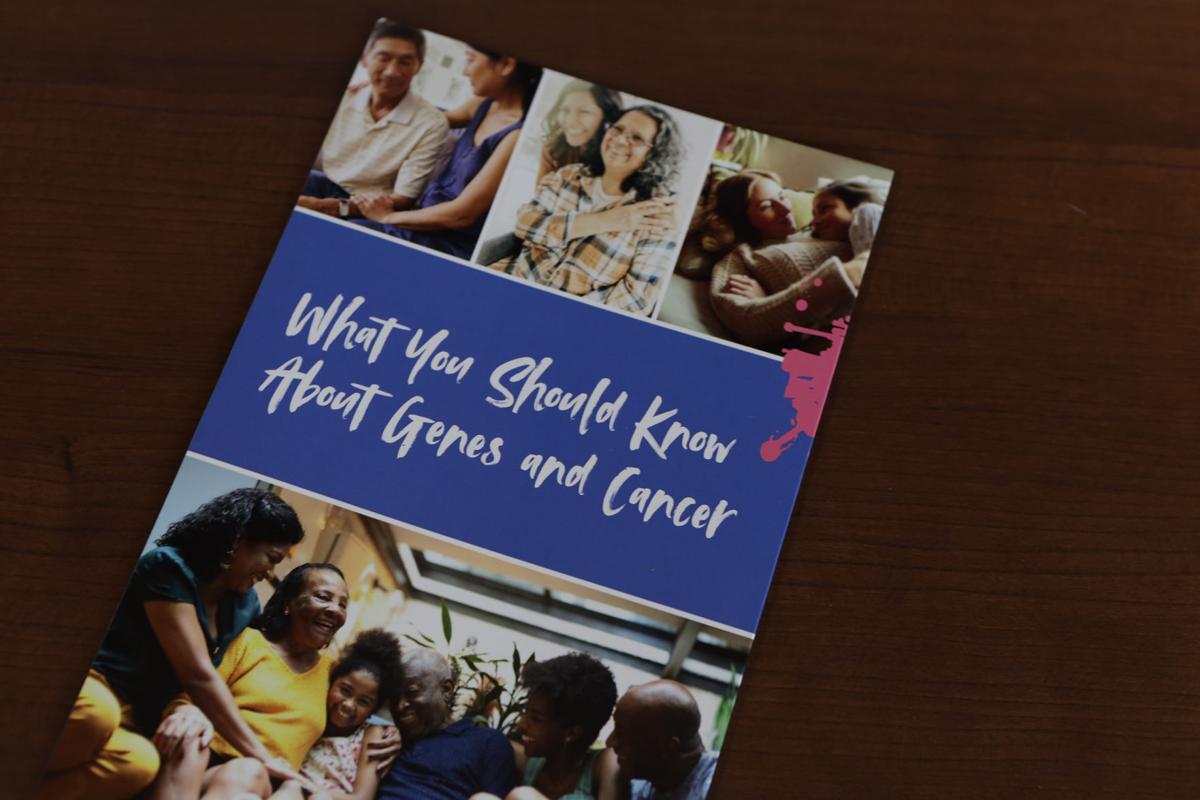 A of the genetic testing counseling brochures used by counselor Courtney Schuiteman.

The cause of cancer can be elusive. But experts say approximately 5-10% of all cancer is hereditary, affording doctors a unique opportunity to help patients anticipate their risks — and take action before a symptom appears.

That has made genetic counseling an increasingly popular way to offer patients information about how hereditary conditions might affect them or their family members.

“There are many types of cancer that may have a hereditary component, meaning that we can identify a mutation in a gene that is associated with an increased cancer risk,” said Courtney Schuiteman, genetic counselor with the High Risk Clinic at Community Hospital in Munster.

The reason these types of mutations are referred to as “hereditary” is because they can be passed through generations in a family, she said.

“Therefore, these types of mutations that we can test for are those that individuals are born with,” Schuiteman said.

The most important component of genetic counseling is getting as detailed a history as possible, Masino said.

“That’s really what drives those mutations that we would include,” she said. “It’s amazing that when you start probing and asking questions, people know more than they think they know.”

Based on this information, a genetic counselor can help an individual decide whether further testing may be warranted for the patient or family members.

Genetic counseling isn’t limited only for individuals who are worried about their cancer risk. Today, genetic counseling is used in pregnancy planning, vision or hearing problems in children and other types of health issues such as muscular dystrophy and sickle cell disease.

“There are a number of mutations that can increase the risk of certain cardiac and neurologic diseases,” Masino said. “There’s a whole bunch of pediatric diseases. Even in prenatal testing, it’s very widely used for that particular area. There are several subspecialties in genetics because of that.”

Schuiteman says it’s important to note that though the term “mutation” can have a negative connotation, it’s common in genetics to describe changes in genes that increase the risk for disease, such as cancer.

“We also call these pathogenic variants,” she said. “Another way to think about it is that someone might have a harmful variant in a gene, and for our discussion, that type of variant increases the risk for developing certain types of cancer. There is nothing anyone does or doesn’t do to cause a mutation in a gene to happen. These changes in DNA simply happen by chance.”

Though genetic testing has been widely promoted for breast cancer, Masino says she expects to see an uptick in patients who want to get evaluated for the risk of other conditions. She says many insurance companies have expanded coverage for the types of patients who should be tested.

“Particularly in colon and prostate, there are still a lot of people out there who are not being appropriately referred for counseling and testing,” she said. “I think over time that will expand. It’s unfortunate when I see people who have cancer and would have made a good candidate.”

“Other specialties, such as prenatal or pediatric genetic counseling, will likely have a slightly different process, but the general principles of gathering information, supporting patients through understanding their genetic risks and providing psychosocial support are true for genetic counseling as a whole,” Schuiteman said.

If tests are determined to be the next best course of action, Masino says most  require either a blood draw or saliva sample.

“If someone had a blood type cancer, it may not be more appropriate to use either one of those,” she said. “So we’d have to get a tissue sample. Or if someone has had a transplant from a related or unrelated donor, we couldn’t use blood or saliva because we’d essentially be getting the donor’s heredity, not the patient’s, so we’d have to do skin.”

To deal with any anxiety in the patient, Masino typically performs a psychological assessment so she knows how the results may impact a person.

“In some cases, I’ve recommended psychological counseling or to meet with a clinician,” she said. “It can be very life changing for people depending on what the mutation is.”

Most people, however, feel like it empowers them to have more information, “either to give them reassurance that they have some control over risk factors for developing cancer or finding out that they are able to have interventions that will catch the cancer early or prevent it in family members,” Masino said.

Steelworkers were injured in an accident at Cleveland-Cliffs Indiana Harbor West in East Chicago.

Simple tips to keep your food fresh and edible

We’ve all done it. We buy a beautiful head of fresh broccoli, carefully store it in the refrigerator crisper, only to discover it a week later…

Blood clots, always a danger particularly for those who have been hospitalized or inactive, have been increasing in size and number during the…

It’s understandable to want to help when you see an animal fending for itself, but there are certain steps to take to ensure you’re providing …

A cup of greens a day

It ranked Indiana in the bottom quarter, concluding Hoosiers are generally less healthy and spend more on health care than the rest of the country.

Mary Ann Shacklett will retire after a lifelong career with the Community Foundation of Northwest Indiana, which is the parent company to Community Healthcare System.

For kids, summer can be a carefree time of fun in the sun. For parents, it’s not quite as carefree. There’s a lot to keep in mind to ensure th…

A of the genetic testing counseling brochures used by counselor Courtney Schuiteman.