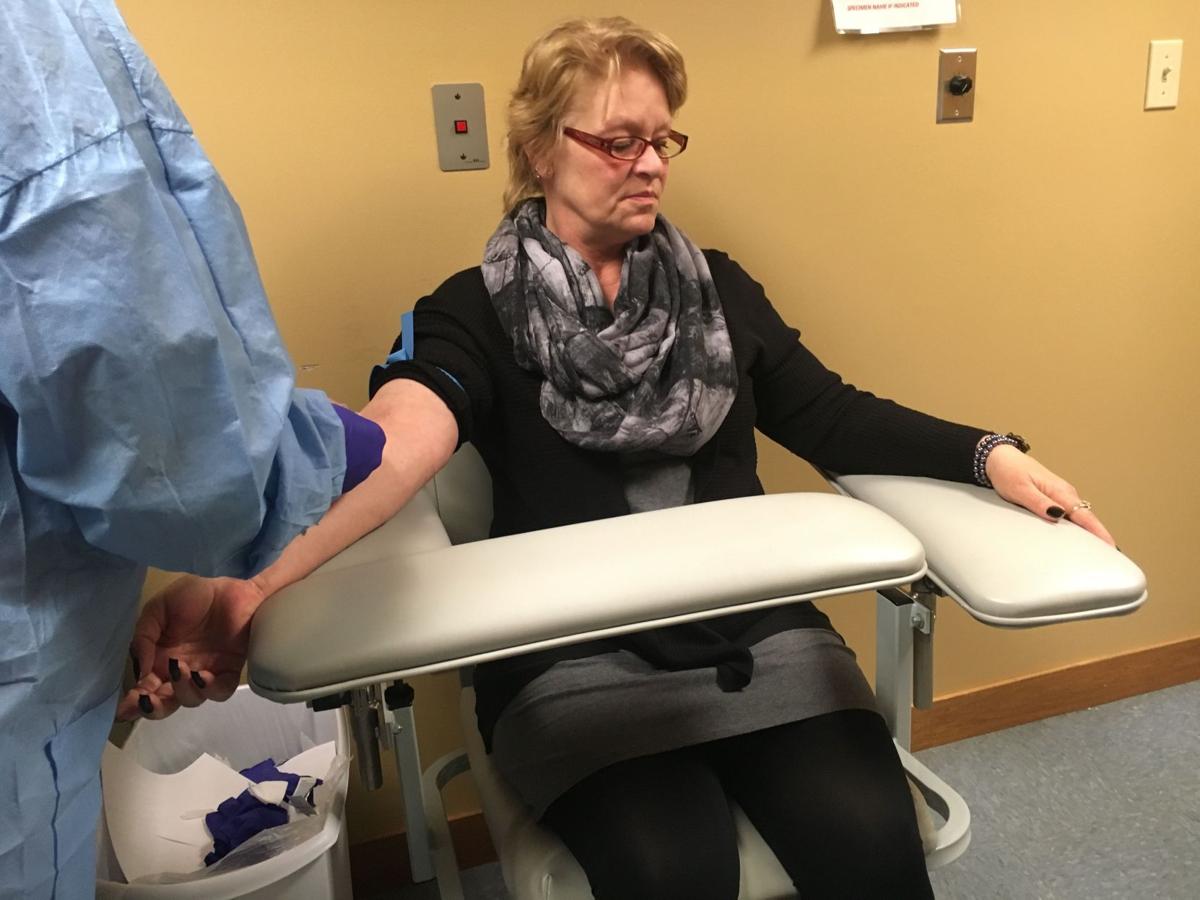 Tina Thompson, of Michigan City, gets her blood drawn on March 15 at HealthLinc in Michigan City. She gained health insurance under Obamacare, but isn't a big fan of the law. She voted for Donald Trump in the 2016 election. 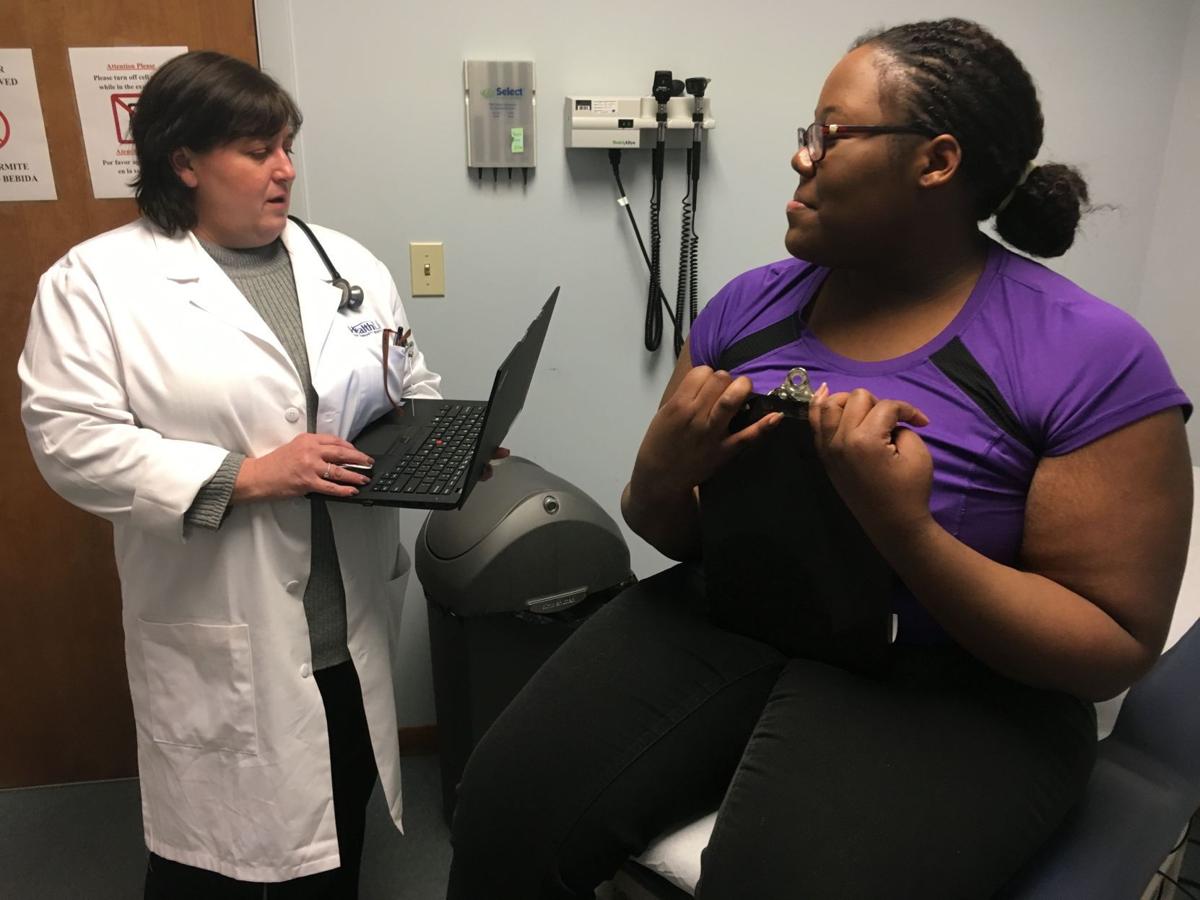 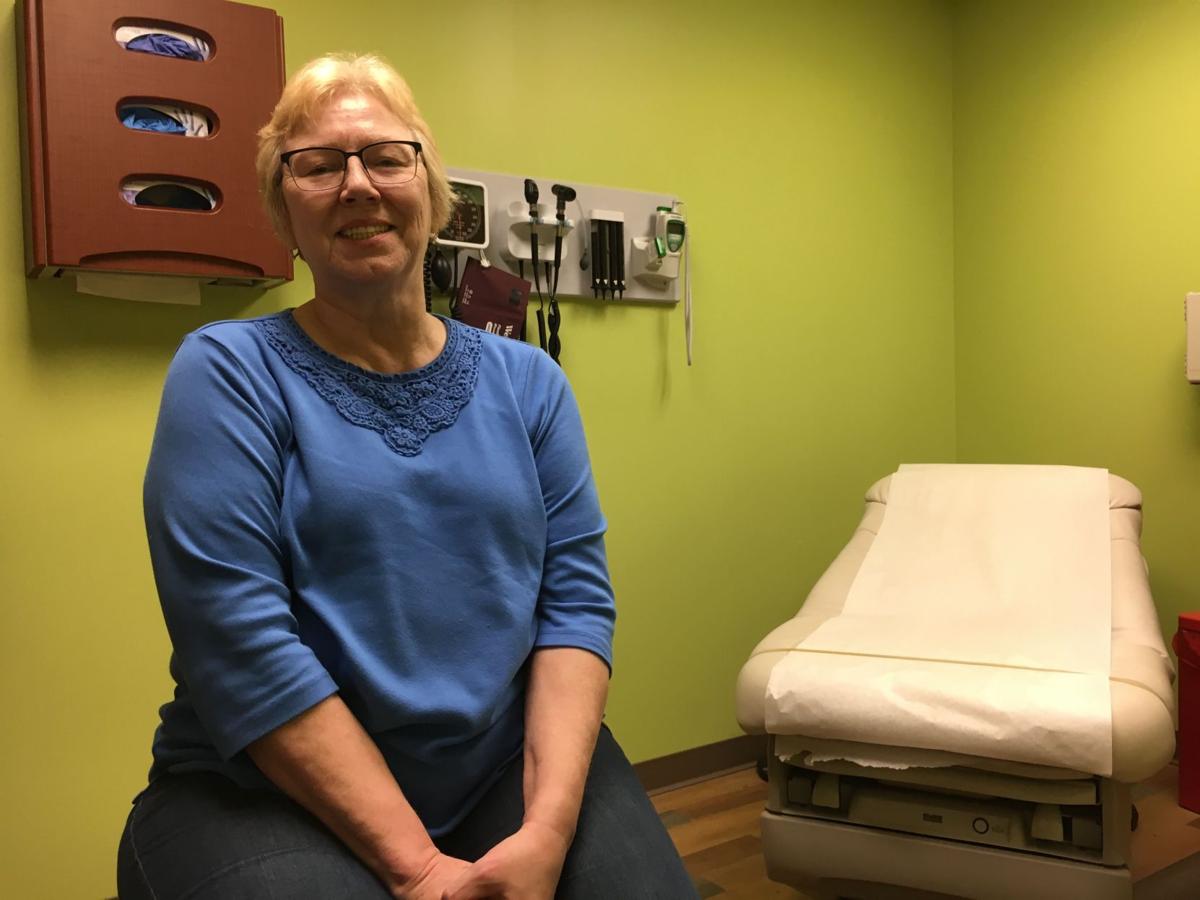 Cecilie Gardener, of Knox, is worried about losing coverage if congressional Republicans and President Donald Trump make changes to the health care system.

MICHIGAN CITY — Tina Thompson sat in a chair, her right arm straightened out, as a technician drew her blood.

"She's a good one. It didn't even hurt," Thompson said, as the needle went right in the vein and the blood flowed immediately into a vial.

A few moments earlier, Thompson, 58, was told she owed a $4 balance for a previous testing. She handed the technician her credit card. "When I saw the $4 I said, 'There's one I can pay,'" Thompson said, letting out a throaty laugh.

The screening, at the HealthLinc federally qualified health center, would determine whether her recently prescribed Lipitor had lowered her cholesterol.

She isn't sure how long she's had high cholesterol. The Michigan City security guard went years without health insurance, because she couldn't afford the coverage her employer offered.

Now, Thompson and millions of others across the nation are caught in the middle of the titanic political fight over repealing the Affordable Care Act, also known as Obamacare, and replacing it with a new health law championed by U.S. House Republican leaders and President Donald Trump.

Thompson first gained coverage under the Healthy Indiana Plan 2.0, the state's Medicaid expansion under Obamacare. She paid about $20 a month for medical, dental and vision coverage. With a recent increase in her income, however, she made too much for HIP, so she bought a plan on the Affordable Care Act marketplace at HealthCare.gov. Her premiums are now $84 a month.

Even so, she isn't a fan of Obamacare, mostly because of the law's requirement that Americans have to pay a penalty if they don't have health insurance.

"I don't even make $20,000 a year and I don't own an iPhone. I'm willing to pay for decent insurance. To be fined for it, that was absolutely crazy," she said. "When I didn't have insurance I would just go to the emergency room."

Congressional Republicans have long opposed Obamacare, claiming it has caused insurance premiums to skyrocket, raised taxes on job creators and created an undue burden on employers by requiring them to provide coverage.

Trump made repealing and replacing the Affordable Care Act a centerpiece of his campaign. Earlier this month, House Republicans introduced the American Health Care Act, which they say will stabilize the marketplace by helping young Americans buy insurance, get rid of Obamacare's "onerous" taxes on the wealthy and give states more freedom to run their own Medicaid programs. The bill also removes the individual mandate requiring that Americans have health coverage.

Last week, the nonpartisan Congressional Budget Office released an analysis of the proposed law, predicting it would cause 24 million Americans to lose their health coverage and reduce the federal deficit by $337 billion by 2026, largely because of the drop in the number of people with insurance.

Thompson voted for Trump. "It's not settled yet," she said of the proposed changes to the health care law. "I know a lot of people who suffered through Obamacare, situations where they couldn't get their medicines. Hopefully it's going to change for the better."

She gets about a $5,000 annual government subsidy to purchase insurance through the marketplace. Under the proposed law, her annual tax credits would be capped at $3,500, which would raise her monthly premium by $125 a month. She said she could afford that much of an increase, but not much more.

The American Health Care Act would also allow insurers to charge people ages 40-64 five times more than those ages 18-24; Obamacare only lets insurance companies charge older Americans three times as much. Critics of the law say insurers fled the marketplace because not enough younger people, who typically use less health care, signed up.

Under this scenario, though, Thompson's monthly premium could increase by as much as $385 a month. In that case, she said, she would just go without insurance like she did before.

Theresa Mercaldo, of Valparaiso, said HIP 2.0 has been a godsend for her. Before she enrolled in the program two years ago, she had a high-deductible, bare-bones insurance plan through her employer. Now she pays $18 a month for coverage.

"I tore my meniscus when I was first on (HIP)," said Mercaldo, 46, a retail cashier, who still walks with a cane because of the injury. "I had MRIs, X-rays. I needed a brace on my knee. It would have bankrupted me before."

When she was underinsured, Mercaldo would just avoid going to the doctor because she couldn't afford it.

HIP 2.0 covers more than 400,000 Hoosiers. The majority of those people were uninsured or underinsured before Indiana Medicaid expanded in 2015.

Nationwide, the Affordable Care Act's Medicaid expansion brought insurance to an estimated 11 million Americans. The Congressional Budget Office predicts that the American Health Care Act will wipe out all those gains, and that by 2026 14 million fewer Americans will be on Medicaid, as states discontinue their expansions.

The proposed Republican health care law would remove federal funding for new Medicaid expansion enrollees, as well as those who lose coverage for more than a month, beginning in 2020. The state of Indiana would likely have to come up with billions of dollars a year to keep HIP 2.0 going.

"Unless Indiana continues HIP, I would have difficulty with getting insurance and being able to afford insurance," Mercaldo said. "I make probably a little more than $10,000 a year. I wouldn't be able to afford half of what I have to do without HIP."

Like Thompson, Mercaldo doesn't have an iPhone. U.S. Rep. Jason Chaffetz, R-Utah, recently came under fire for suggesting that, if the new health care law passed, Americans would have to choose between paying for health care or "buying that new iPhone that they love."

"I think I'm managing my health a lot better since I've been going to the doctors," Mercaldo said. "If I lose my insurance I would probably cut down on my blood pressure medication and be unhealthy."

Mercaldo, a registered Republican, voted third party in the 2016 election. Despite her health insurance being in jeopardy, she doesn't regret her vote. She doesn't trust Trump, she said, and wouldn't have trusted Hillary Clinton, either. She said she likely would have voted for Bernie Sanders had he been the Democratic candidate.

"I don't have Obamacare. I have HIP," said Shaniqua Wright, 22, of Michigan City. When told her plan is Obamacare, she said: "I didn't know that."

Still, she isn't all that concerned about the law being replaced. "I'll get by somehow," said Wright, who smiles often, giving off a happy-go-lucky vibe.

The veterinary student takes medication for high blood pressure. If she didn't have insurance, she said, she would just go without the drugs. She said it might even force her to exercise more.

She went for an independent candidate in the 2016 presidential election. "I'm OK with who I voted for," she said.

Jasmine LeBron, of Michigan City, also isn't worried about the possibility of losing her HIP insurance. In fact, she opposes Obamacare because she doesn't believe people should be forced to have coverage. She also said she's against "the whole socialist agenda" and "the fact everyone thinks they need free health care."

The 23-year-old, who works at Chipotle and as a waitress, was uninsured when she fractured her spine and broke her rips in a recent accident. She went to the emergency room and was eventually transferred to a South Bend trauma center.

Afterward, she needed surgery. However, no surgeon would operate on her without insurance. So she reluctantly signed up for HIP. She said she couldn't afford the $1 a month premiums for HIP Plus, which offers dental and vision in addition to medical coverage, so she is on the free HIP Basic plan. If HIP wasn't an option, she said, "I would have lived with the injury until I could afford insurance."

She said she doesn't pay much attention to the news about health care.

"It's all sort of confusing, and I don't even know what's happening," she said.

Cecilie Gardener, of Knox, said HIP has been a "lifesaver" for her. She had gone years without insurance but now has her lupus and related depression under control.

Before she had coverage, she went to HealthLinc, which offers services to uninsured people on a sliding scale. But with HIP, she finally got to see an immunologist regularly, which she couldn't afford before. The specialist diagnosed and treated her lupus, a chronic inflammatory disease in which the body's organs and tissues come under attack by its own immune system and is characterized by rashes all over the body. Her other symptoms included fatigue, fevers and depression.

"I can't believe how great Obamacare has been for me," said Gardener, who shakes and fidgets often, side effects from her lupus medication.

She voted for Clinton in the election, mostly to keep Trump from winning, she said. She felt Clinton was too cozy with the agribusiness giant Monsanto. She would have much preferred Sanders.

"I'm frightened for what's going to happen once the GOP gets their act together," said Gardener, who makes $9.15 an hour as a gate attendant at a state park. "The way it stands now there will be 24 million fewer people with insurance. We're going to make the rich people richer."

Luckily, she turns 65 in December and becomes eligible for Medicare. Even so, she worries congressional Republicans and Trump could make changes to that program as well.

"I'm terrified what's going to happen," she said. "It's like we're all being held hostage."

Northwest Indiana hospitals and safety-net clinics have their eyes on Washington, D.C., as federal lawmakers debate potentially severe cuts to…

Linda Vogedes can smile again. And eat steak. And vegetables.

Emily Kowalski didn't have insurance recently even though she had paid the state for it.

Indiana's uninsured rate fell by nearly a third after the full implementation of the Affordable Care Act, according to a study released this month.

When Gina Rue went from full- to part-time work in 2014, she was suddenly left without employer-sponsored health insurance.

On March 6, House Republicans released their plan to repeal and replace the Affordable Care Act.

Tina Thompson, of Michigan City, gets her blood drawn on March 15 at HealthLinc in Michigan City. She gained health insurance under Obamacare, but isn't a big fan of the law. She voted for Donald Trump in the 2016 election.

Cecilie Gardener, of Knox, is worried about losing coverage if congressional Republicans and President Donald Trump make changes to the health care system.