Gov. Eric Holcomb is leaving Indiana on Saturday for an African destination where he likely won't encounter many of his fellow Republicans.

The event, known as COP27, is the 27th annual Conference of the Parties to assess global progress in combating "dangerous human interference with the climate system," in accordance with the United Nations Framework Convention on Climate Change initially signed by the United States and 153 other countries in 1992 at Rio De Janeiro, Brazil.

Holcomb is scheduled to deliver a keynote address at the conference — attended by representatives of more than 200 countries, as well as subnational leaders, business executives and academics — detailing Indiana's efforts to transition to clean energy infrastructure and apply innovation to the state's energy mix.

In an exclusive interview with The Times, Holcomb said there are great stories to tell about what Indiana as a whole, and particularly businesses and institutions in Northwest Indiana, are doing to spur innovation, collaboration and next-generation technologies.

"I look forward to presenting a long list of practical and pragmatic steps that have occurred in the state of Indiana in terms of increasing alternative energy supply," Holcomb said.

"The market is moving this way on its own, but we certainly have real alignment now with government, academia and the private sector. And other places around the world that we compete against simply don't," he added.

He also noted the Cleveland Cliffs steel mills in East Chicago and Burns Harbor are continuing to find more efficient means of churning out the steel that goes into the electric, hybrid and hydrogen-powered vehicles of today and the future.

In addition, Holcomb said countless suppliers and other small businesses in the Region and across the state are indelibly linked to the innovations and successes imagined and developed by those two global giants.

"As important as those technologies are and the investments that they're making, to me it's also very supportive of the tens of thousands that are employed somewhere along that value chain," Holcomb said.

"I want to make sure we don't wake up two years from now or 10 years from now when an industry has transformed itself and we just sat by and watched the paint dry," he added.

Holcomb acknowledged many Republicans cast doubt on human-caused climate change. But he sees no reason not to brag about Indiana's efforts to combat it in front of an international audience likely unaware of the state's achievements and looking for places to bring their businesses.

"I will show up in support of all the investments that are occurring and that we hope to be a part of in the coming years," he said. "Change is a fact of life and technology and innovation are exciting, and I'm excited to share the Indiana story about our all-of-the-above approach."

Before heading to Egypt, Holcomb is set Thursday to join executives from Doral Renewables LLC to break ground on the second phase of the $1.5 billion Mammoth Solar farm across 13,000 acres in Starke and Pulaski counties in rural Northwest Indiana.

The governor said he expects coal, oil and natural gas will remain the core components of Indiana's energy systems well into the future.

But he said Hoosiers need to be willing to embrace change over time, just as his great-grandfather, a blacksmith in Knox County, saw his world transform during his lifetime from a 19th century horse-and-buggy economy to a 20th century dominated by the internal combustion engine.

"I'm saying, 'What can we do in the state of Indiana to be an example, to be actually a leader, and not left behind?'" he said. "We want to make sure that as other options become not just viable, but affordable, that we are able to meet the market's demand."

Holcomb said his Nov. 10 address in Egypt, during the Achieving Measurable Climate Benefits through Innovative Infrastructure Investments in North America session, also will focus on how Purdue University, Indiana University, the University of Notre Dame, the state and local governments are collaborating to ensure clean and reliable energy security, stability and innovation.

"I embrace the fact that we're always going to be leaning into new innovations, always seeking to be more efficient and improve things, and this is a huge strategic area where the state of Indiana can truly harness all the synergy of all these different sources: wind, solar, nuclear, hydro, oil, gas, coal. We've got it all," Holcomb said.

During their stay at the UN climate conference, Holcomb and Chambers plan to participate in additional discussions focused on clean energy and technology with representatives of international businesses, universities, foreign governments and global organizations. They'll also attend a reception at the American Chamber of Commerce in Egypt.

"As a state, Indiana is squarely focused on building the economy of the future — one that is powering and is powered by sustainable solutions and clean energy," Chambers said.

"We are seeing unprecedented momentum, and Indiana has an incredible story to tell. I look forward to advancing future-focused conversations and partnerships at COP27 that will usher in new innovations and investments, fueling the global economy while reducing our carbon footprint," he added.

The Hoosiers are scheduled to return to Indiana on Nov. 12.

This will be Holcomb's 14th foreign trade mission since taking office in 2017 and his first visit to Egypt as governor.

A little bit of Hohman, also known as Hammond, was on display at the Governor's Residence for Halloween this year.

Hoosiers will pay a total of 74.5 cents in taxes, including 56.1 cents in state taxes, for every gallon of gasoline they purchase in November …

The differences between the candidates seeking to represent Indiana in the U.S. Senate were stark Sunday night in their sole debate prior to E…

Northwest Indiana residents looking to check an item off their to-do list still have time to cast their ballot ahead of Tuesday's general election.

The Republican chief executive is in northeast Africa this week to speak on Indiana's efforts to transition to clean-energy infrastructure.

"We don't need to constrain humanity to save it. Just the opposite. We need to unleash our collaboration, our creativity and our invention," s…

The project is on track to be the largest solar farm in the country. 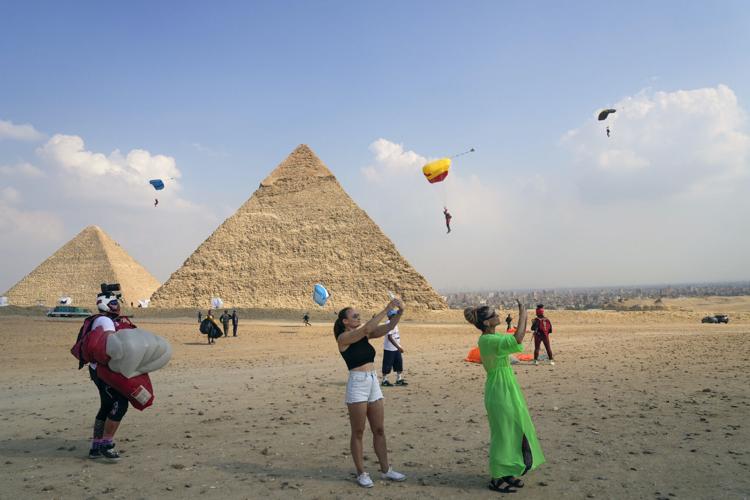 Tourists film parachutists as they descend toward the Giza Pyramids, near Cairo on Wednesday. More than 100 parachutists from 16 countries participated in the "Jump Like a Pharaoh" as Egypt prepares for the COP27 international forum, which a group of Hoosier officials, including Gov. Eric Holcomb, will attend starting Sunday. 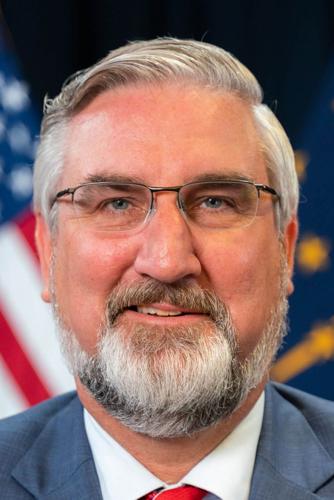