Ambassador Academy: Religion the cornerstone of education
Share this
{{featured_button_text}}
1 of 6 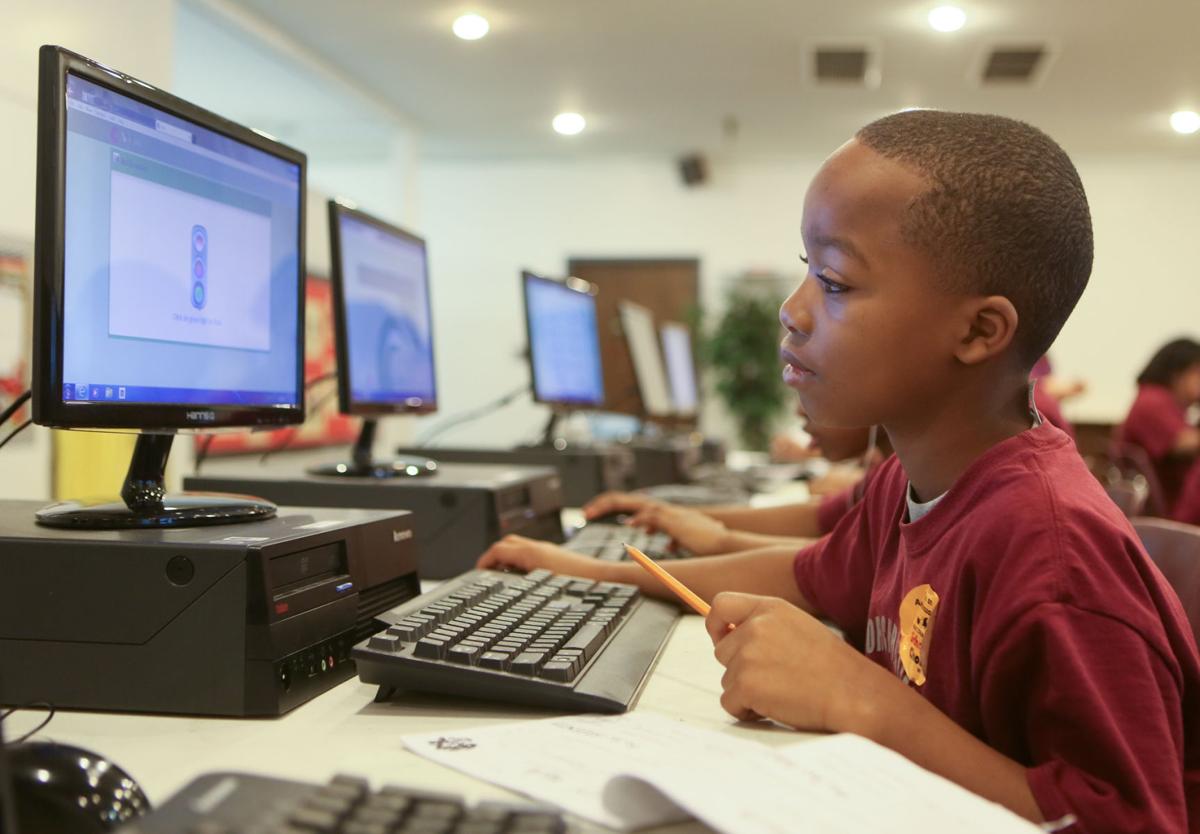 Fourth-grader Dellquan Williams works on English and math in the computer lab at Ambassador Christian Academy in Gary. 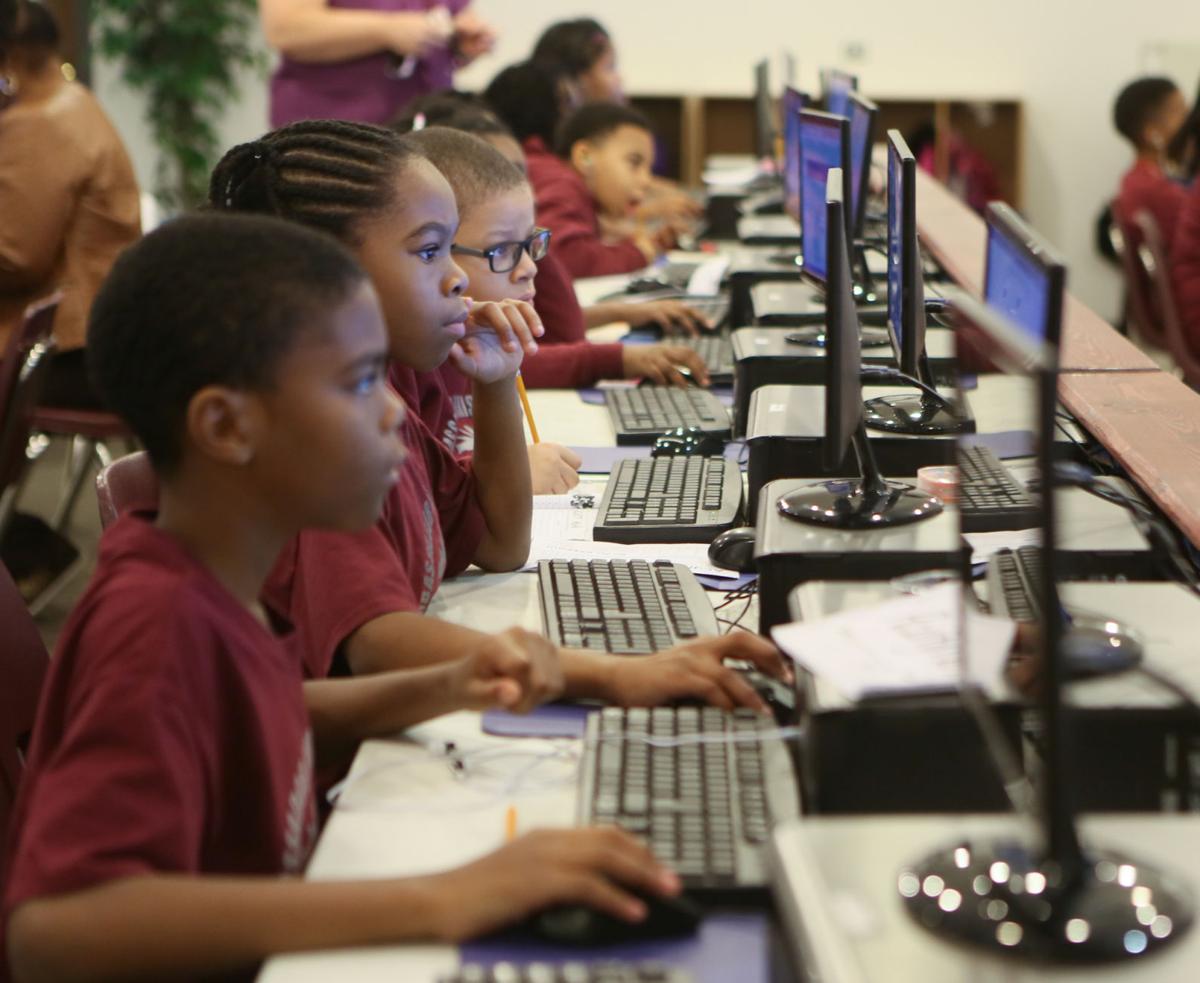 Fourth-graders work on English and math in the computer lab at Ambassador Christian Academy in Gary. 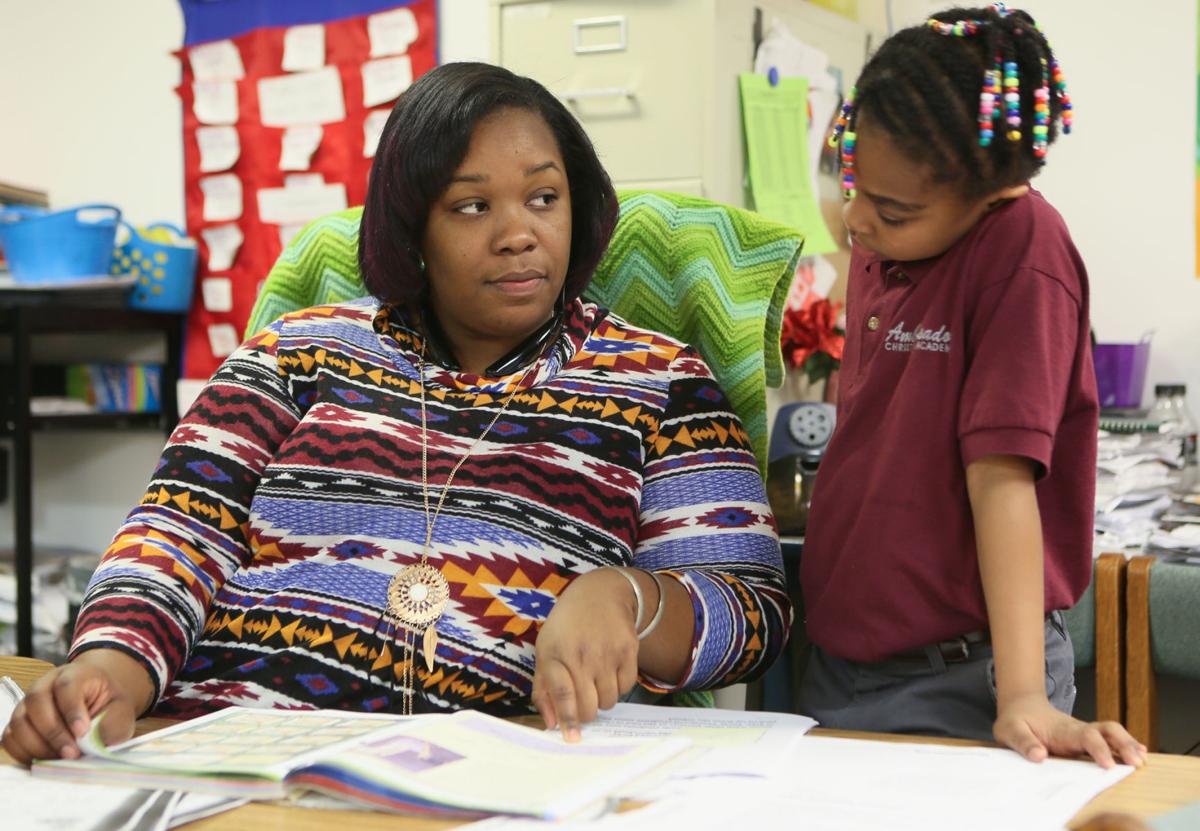 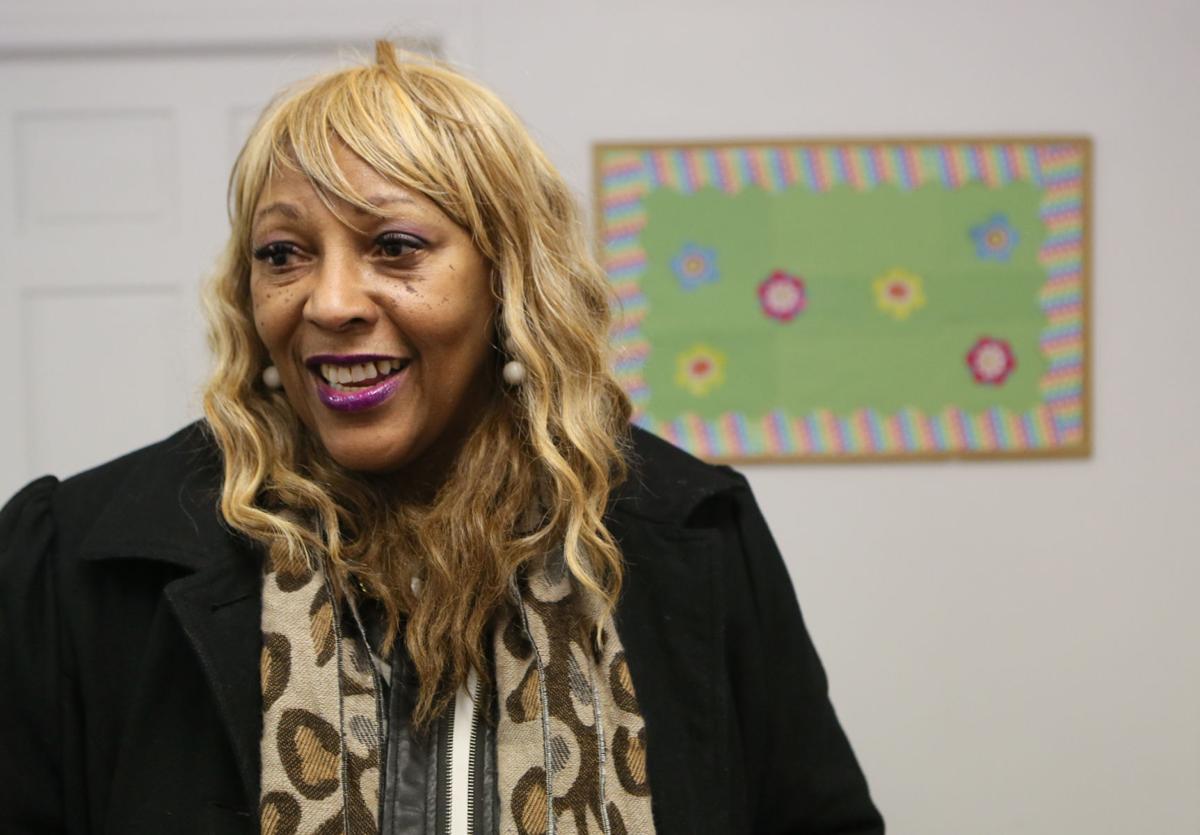 Vercena Steward is the principal at the Ambassador Christian Academy in Gary. 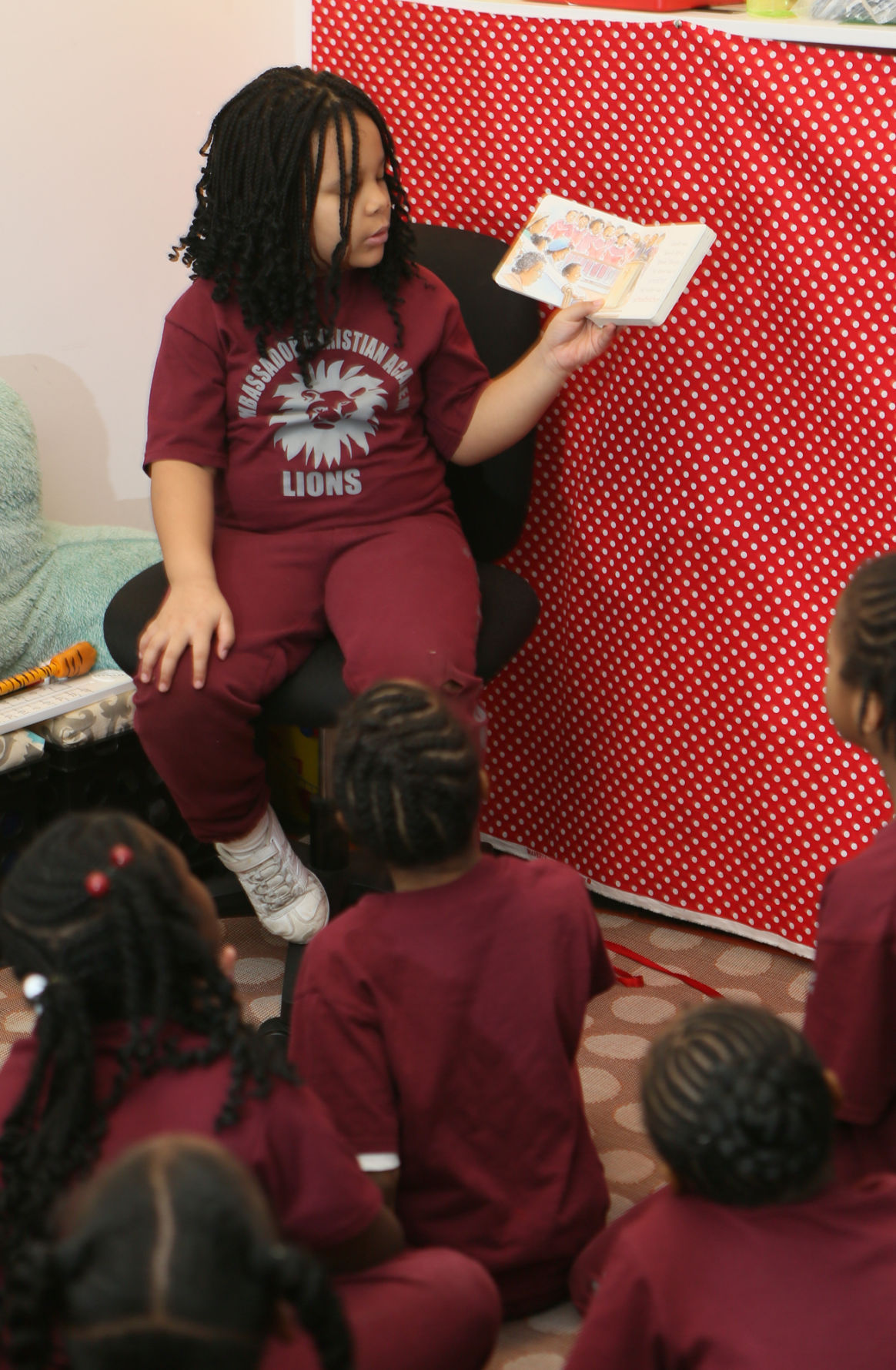 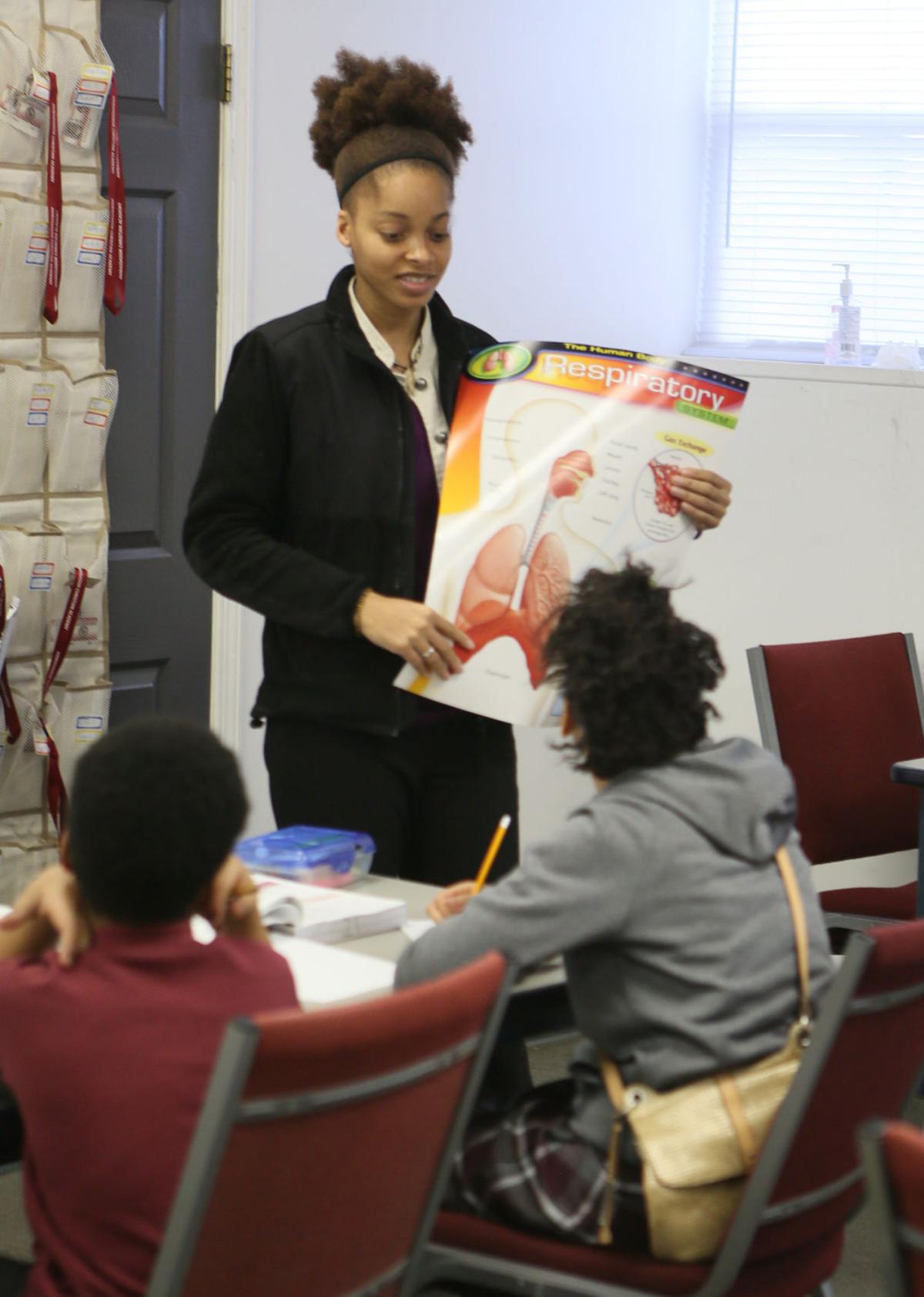 GARY — "Crisscross applesauce," said Dionne Cobb, as her second-graders gathered around her in a semicircle on the floor for a sing-along at Ambassador Christian Academy.

Across the street in the middle school building, Yamina Jackson is teaching seventh-grade science, going over the circulatory and cardiovascular systems. She explains the circulatory system as a network of organs and vessels responsible for the flow of blood, nutrients, hormones, oxygen and other gases to and from cells.

She lectures about the lungs, a pair of elastic, spongy organs used in breathing, located just behind, and to either side of the heart.

"Can you live without a lung?" Cobb asks her students.

A block away, Ambassador houses a handful of freshmen and sophomores. In Timothy Ojo's  algebra class, freshmen are working on a group quiz in preparation for a major test the next day.

They solve the problem by themselves, then talk about it, helping them to reinforce what they've learned and perform their best on the state-mandated End-of-Course Assessment on algebra.

Ambassador Christian Academy is one of numerous private schools in Northwest Indiana. It has 288 children enrolled from age 1 to 10th grade. In the fall, the school will expand to 11th grade and the following year, it will expand to include seniors. Of the 288 students enrolled, 201 of them use a voucher to help with tuition.

A voucher, or Indiana Choice Scholarship, allows a family to use public school dollars to attend private school.

The private school was established 18 years ago by Gary-based Embassies of Christ Kingdom Ministries, headed by Pastors Cedric and Joyce Oliver.

Ambassador Academy has been graded a C for the 2014-15 school year by the Indiana Department of Education.

Ambassador Principal Vercena Stewart said religion, the cornerstone of the school, is taught at the beginning of every school day. As Stewart walks through the building and greets different classrooms, each say: "(We are) blessed and highly favored, walking in divine hope in the mighty name of Jesus."

Once Bible study is over, Cobb moves into her first lesson for the day, reviewing addition and multiplication facts and looking at the day's weather with students.

A Gary native, Cobb taught English as a second language in Japan for nearly two years before returning to the city.

"My family is here. I came home to visit in 2011, and my grandmother wasn't doing well so I stayed," she said.

This is Cobb's fifth year teaching at Ambassador Academy, and she said she wouldn't teach at any other school.

"I chose a Christian school because I also want to teach the kids about God," she said.

"So many of the students only know about their own home and don't know about the global world that's out there, that there are other places besides where they live. God has me here for a purpose."

Cobb said she uses music and song, because she knows that helps children learn. "In my class, you'll see a lot of music and games and fun," she said.

Cobb said it's important to get her second-graders ready for the state-mandated ISTEP-Plus exam when they're in third grade, but she said it's also important to help them become independent and critical thinkers.

"During reading, we have close reading strategies, where they have to underline, highlight and prove their answer," she said. "That's a big deal, because they'll have to do that on ISTEP in third grade."

Did you miss our latest Making the Grade stories? This slideshow features all the stories that have run in the series for the 2015-2016 school…

Celebrating creativity: The Society of Innovators pays homage to individuals, teams over past decade

Religion is the cornerstone of education at Ambassador Academy.

Fourth-grader Dellquan Williams works on English and math in the computer lab at Ambassador Christian Academy in Gary.

Fourth-graders work on English and math in the computer lab at Ambassador Christian Academy in Gary.

Vercena Steward is the principal at the Ambassador Christian Academy in Gary.