The Amazon Fullfillment Center in Joliet is pictured. Amazon has been building warehouses in central Indiana, Illinois and southeast Wisconsin, bypassing Northwest Indiana. 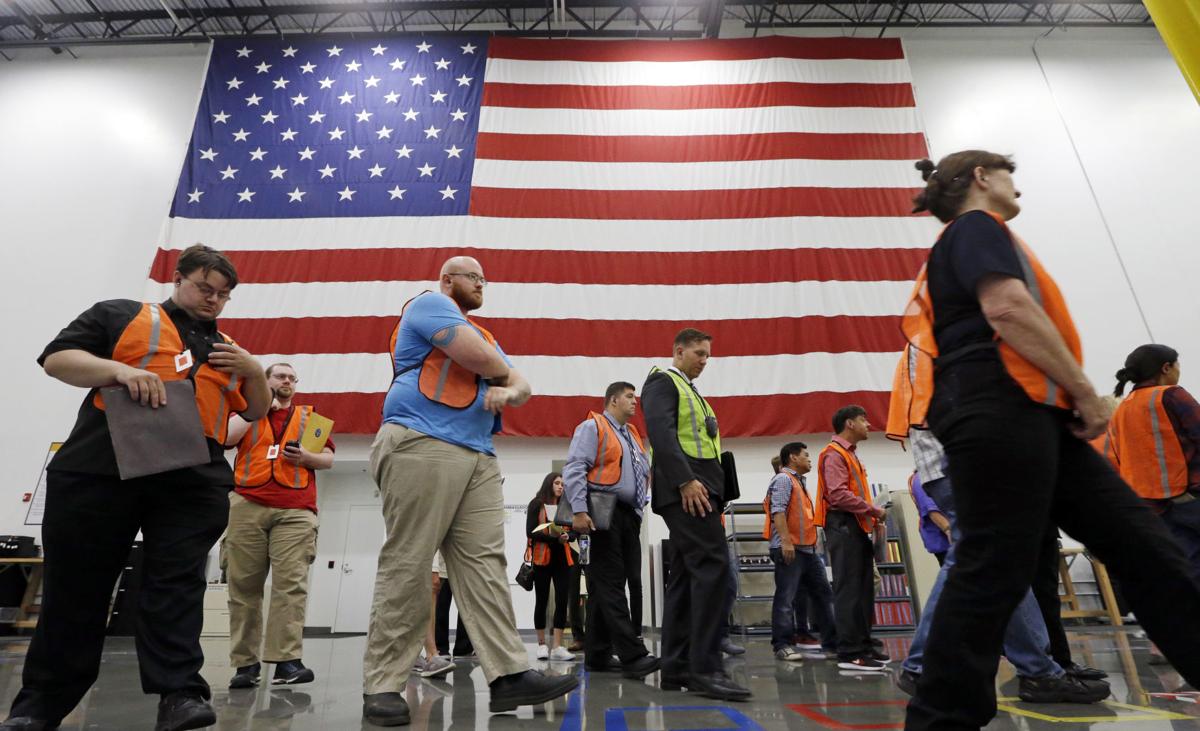 The first group of applicants walks past a giant American flag as they begin a site tour during a job fair last summer at an Amazon fulfillment center, in Kent, Washington. 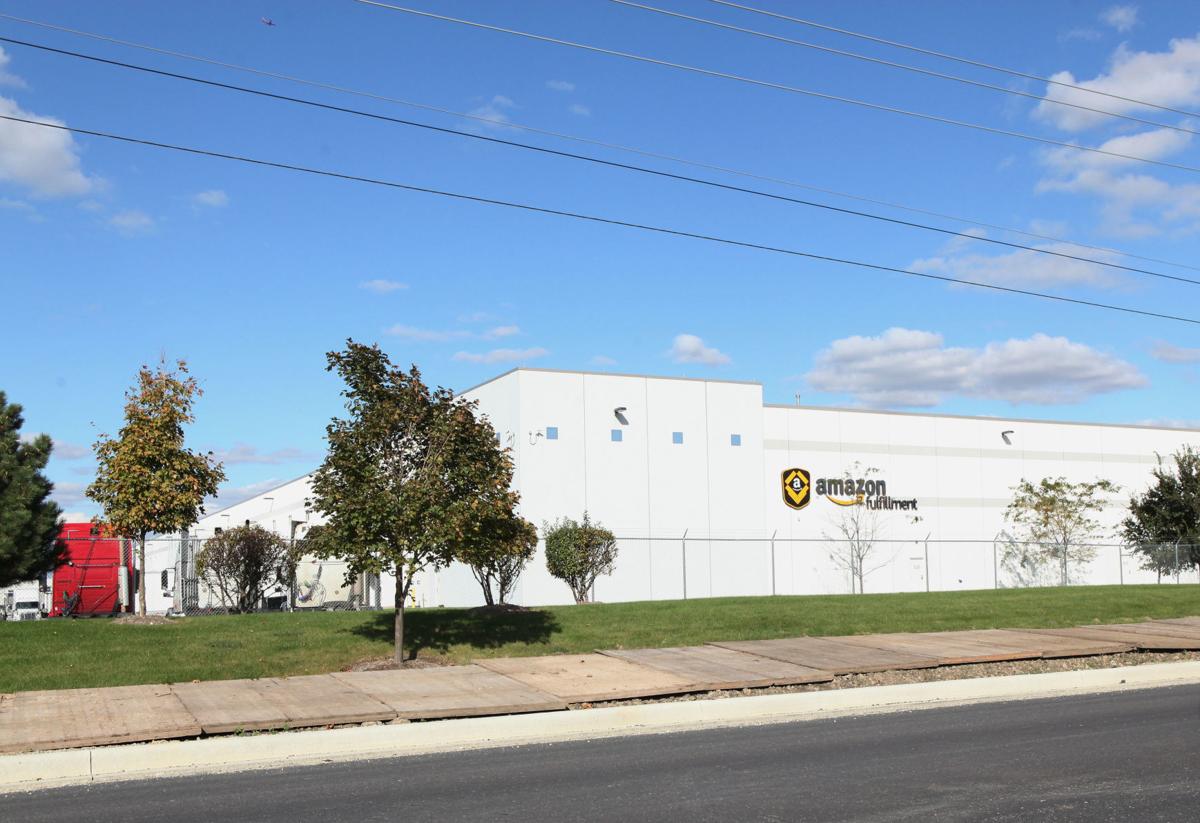 Gary and Hammond both chased the widely coveted Amazon HQ2, a second corporate headquarters for the Seattle-based online retail giant that promises 50,000 high-paying jobs and $5 billion in investment in the lucky city that lands it.

Amazon, which made founder Jeff Bezos the wealthiest man in history, invented Prime Day, its own annual holiday, and is widely credited with driving many brick-and-mortar retailers out of business, got 238 bids from across North America for HQ2. But it passed on Northwest Indiana when narrowing its list to 20 finalists that include Chicago and Indianapolis.

Hammond and Gary ultimately both fell short in their self-admittedly longshot campaigns for Amazon’s second headquarters, but it’s not clear whether they were ever even in the running for the more attainable warehouse that’s coming to southeast Wisconsin.

Just a few years after opening a $250 million warehouse that employs 1,500 in Kenosha, Wisconsin, on the northern end of the Chicago metropolitan area, Amazon now is looking to build a four-story fulfillment center with more than 1,000 jobs in a business park in Oak Creek just off Interstate 94, according to the Milwaukee Business Journal and the Milwaukee Journal Sentinel.

Amazon did not respond to requests for comment, but the Racine Journal Times reported plans already have been filed with the state for a “commercial warehouse and distribution facility serving as an internet retail fulfillment center.”

As Amazon expands its distribution network across the United States, it's entirely bypassed Northwest Indiana, sometimes billed as "the crossroads of America," thus far, while putting warehouses in central Indiana, Illinois and southeast Wisconsin.

Amazon occupies about 1.5 million square feet in Kenosha, where it opened a fulfillment center in 2015. The fast-growing online retailer, which now also owns Whole Foods, went from not having a single warehouse in Illinois in 2014, to having 8,000 employees in the Land of Lincoln and nine fulfillment centers, including in Joliet, Romeoville and Monee.

Indiana has seven Amazon warehouses, all of which are located downstate.

The new warehouse in Oak Creek is projected to be even bigger than Kenosha's, at least 2.5 million square feet.

Unlike the high-profile Amazon HQ2 sweepstakes, economic development projects normally are shrouded in secrecy. Site selectors hired by companies to scout out locations approach cities and economic development agencies about potential warehouses or factories with code names like "Project Arrow" or "Flying Eagle," and the locals often don't learn the company they're trying to court until late into the process, after other prospective sites have been winnowed down.

Hammond Mayor Thomas McDermott Jr. said he wasn’t sure whether his city had gone after the fulfillment center that's coming to Oak Creek, but said it would be open to pursuing an Amazon warehouse in the future.

“That’s definitely something we would love to have,” he said.

Gary was mum on whether it made a case for a fulfillment center, more plausible to attract than a corporate headquarters being pursued by heavyweights like New York City, Washington, D.C., Atlanta, Boston, Los Angeles and Toronto.

The Northwest Indiana Forum routinely goes after warehouse projects, but is uncertain whether it mounted a bid for an Amazon center, Director of Marketing and Communications Raeann Trakas said.

"We didn’t work on a Project Arrow," she said, referencing Wisconsin's code name for the Oak Creek warehouse. "It is unknown if the project had a different name in Indiana."

And even after discovering who they're working with, economic development officials can be sworn to secrecy about particular projects.

Lake County IN Economic Alliance President and CEO Karen Lauerman wouldn't comment on whether her agency tried to lure the latest Amazon fulfillment center, but said her agency works on all state, regional and locally generated leads.

"Lake County is in competition for many projects, including large-scale e-commerce and product distribution centers," she said.

"LCEA continues to focus a portion of our effort on this fastest-growing industry cluster, recently attending an exclusive national e-commerce site-selector conference to bring additional attention to our county and communities."

Demand for such facilities has been soaring as more and more consumers do at least some of their shopping online.

The Lake County IN Economic Alliance, for instance, recently was in talks with a developer interested in building an e-commerce warehouse of between 1 million and 3 million square feet that could employ up to 3,000 workers somewhere in Lake County, potentially by the Gary/Chicago International Airport.

"Amazon and similar e-commerce distributors like Chewy.com, as well as brick-and-mortar names with an e-commerce component, are continuing to grow and expand in the Midwest," Lauerman said.

"Lake County is a highly desirable location within the Chicago metropolitan footprint and positioned to attract these types of businesses and jobs. LCEA understands the multiple factors driving the fulfillment site decisions with the goal to keep Lake County in the mix and in the forefront for these types of projects."

Fluor, which bills itself as "the world's largest and most admired engineering, procurement and construction company," has opened a new integr…

A hair care industry conference returns to Schererville for the fifth year Sunday.

NEW YORK — Amazon, which is growing too big for its Seattle hometown, is spreading out to the East Coast.

Northwest Indiana's economy grew by an annualized rate of 2.9 percent to $30.4 billion in 2018, growing nearly twice as fast as it has in rece…

Amazon is looking for a few good entrepreneurs to help deliver packages throughout Northwest Indiana.

GARY — Amazon and the city of Gary will have a job fair Friday for the e-commerce giant's new warehouse in Gary.

Some entrepreneurs describe a steep uphill climb in establishing retail businesses in Gary.

Engine and other machine assembler is the fastest-growing job in Indiana, with a breakneck growth of 770% over the past 10 years.

The Northwest Indiana Forum will give an update this month on its "Ignite the Region" economic development plan to grow the local economy.

Up to $150 off some laptops. As much as $75 off high-end Bose noise-cancelling headphones. An Insta Pot for $58, 40 percent off the regular price.

A few years ago contractors tore down the stately art deco State Line Generating Station that was built in the 1920s, paving the way for a mas…

In the future, when your family gathers around the couch and starts streaming a movie on Netflix, the digital content may be coming faster int…

Drive down U.S. 30, Indianapolis Boulevard or any of Northwest Indiana’s major thoroughfares, and the carnage is apparent.

The mall chain that has pierced the ears of countless teen girls has filed for Chapter 11 bankruptcy as it looks for relief from $1.9 billion …

A decade ago, Northwest Indiana would never have considered a collaborative bid to bring a major corporate headquarters to the Region.

Hammond, Gary and Northwest Indiana have submitted bids for Amazon's widely coveted second headquarters, which could invest $5 billion and emp…

The Amazon Fullfillment Center in Joliet is pictured. Amazon has been building warehouses in central Indiana, Illinois and southeast Wisconsin, bypassing Northwest Indiana.

The first group of applicants walks past a giant American flag as they begin a site tour during a job fair last summer at an Amazon fulfillment center, in Kent, Washington.