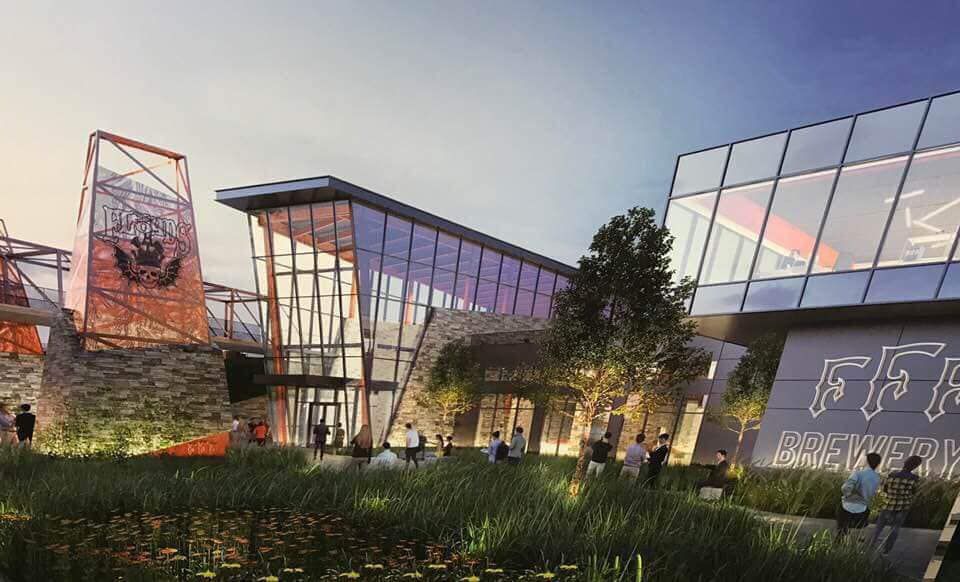 A rendering of the proposed 3 Floyds headquarters in Munster is pictured. 3 Floyds has filed plans with the town of Munster that would more than double its size to over 136,000 square feet and add a terraced garden. 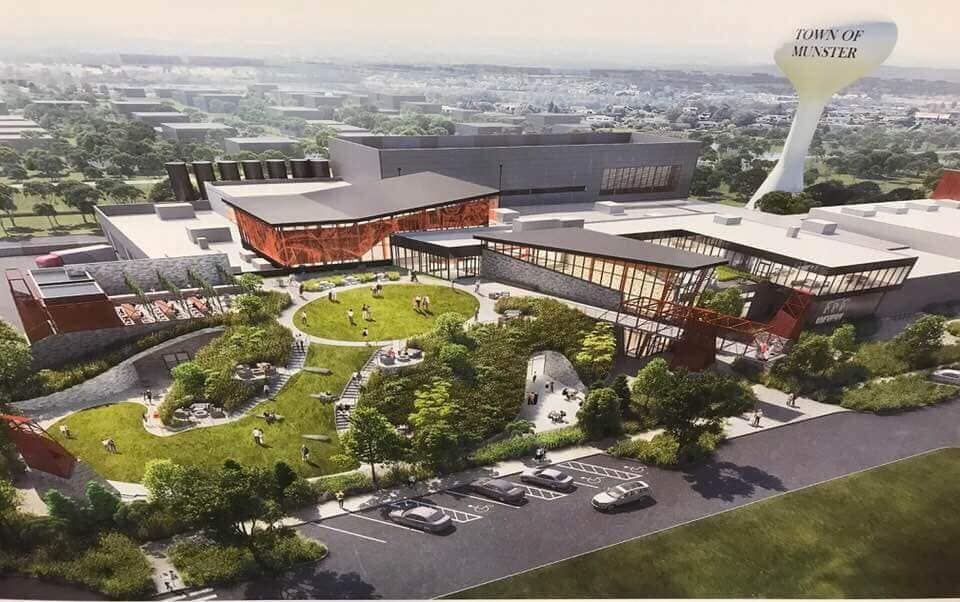 A rendering of the expanded 3 Floyds campus proposed in Munster is pictured. Plans call for more green space and al fresco dining. 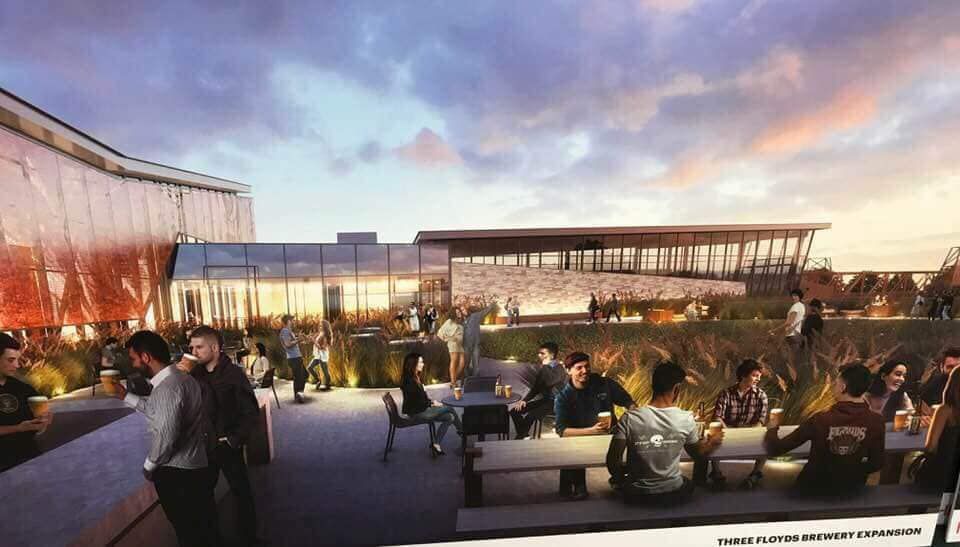 A rendering of the proposed expansion of 3 Floyds headquarters, which would be more than twice as large as the current facility.

A rendering of the expanded 3 Floyds headquarters, which would be more than twice as large.

A rendering of the proposed 3 Floyds brewery in Munster is shown. 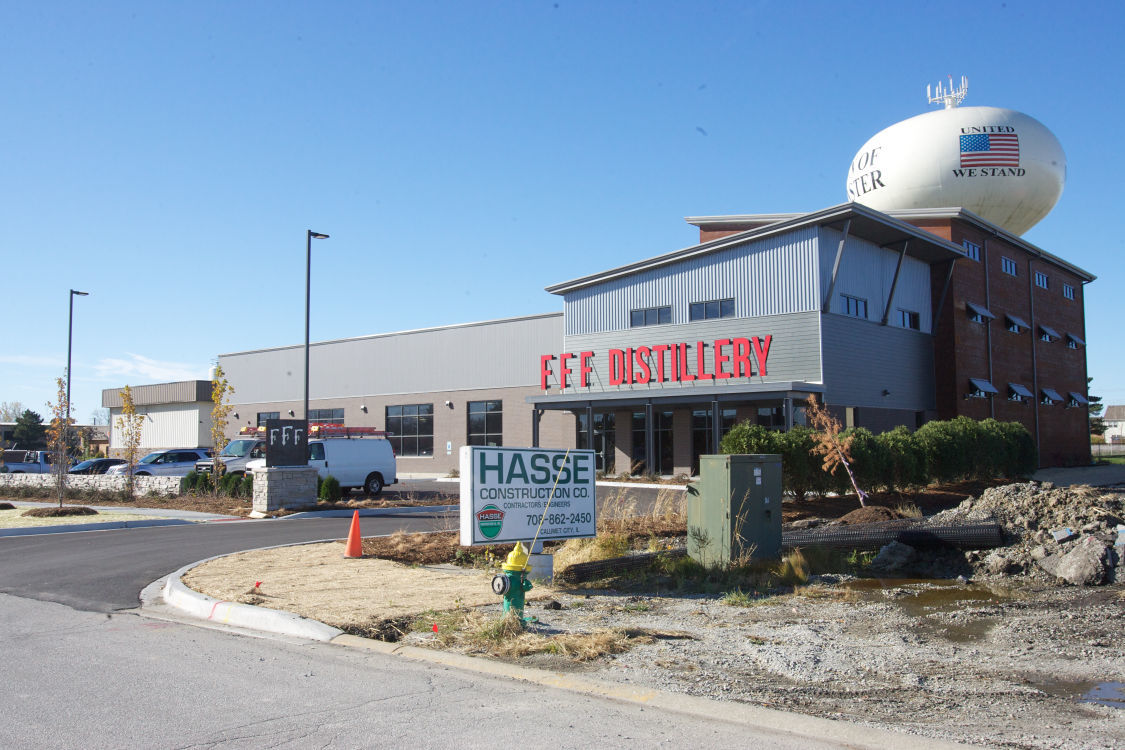 It's often a long wait for a table if you want to eat at 3 Floyds' brewpub in Munster.

But the acclaimed 22-year-old craft brewery, which has been named the best in the world numerous times by RateBeer.com, is looking to add more seating, especially during the summer months, as part of a sweeping expansion project that would give it a striking new appearance.

3 Floyds has filed plans with the town of Munster that would more than double its size to over 136,000 square feet and add a terraced garden. Renderings show a radical overhaul that would include many hyper-modern glassy facades in a campus-like setting and a garden that would sweep dramatically over one of the buildings, effectively submerging it under a man-made hill.

It's drawn comparisons to tech companies' corporate headquarters and museums.

3 Floyds now sits at the edge of an unassuming industrial park, which would be completely transformed with a substantial addition of green space, including a great lawn, a lower lawn and a hill-like sloping lawn that would let outdoor diners walk atop a building onto a green roof where they could dine al fresco or belly up to a walk-up bar.

The craft brewery, known for its heavy metal aesthetic and aggressively hopped beers like Alpha King and Zombie Dust, hired the global architectural firm HKS to design the expansion, which will extend partly into a neighboring gravel lot 3 Floyds owns. The Dallas-based firm, which has a Chicago office, has done many high-profile projects include Lucas Oil Stadium in Indianapolis, the new U.S. Bank Stadium in Minneapolis, AT&T Stadium in Dallas, the Jersey Boys Theatre at The Palazzo in Las Vegas, the Lear corporate headquarters near Detroit, the Terminus 200 office tower in Atlanta, the Avon Cosmetics European Headquarters in the United Kingdom, the U.S. Census Bureau headquarters in the Washington, D.C., suburbs and the Walter Reed National Military Medical Center in Bethesda, Maryland.

In their talks with the town, company official have compared 3 Floyds' new digs to the headquarters of the national craft brewery Stone Brewing in Escondido, California, just outside San Diego.

"It's like a George Lucas Museum of beer - in terms of its architecture" Munster Planning Director Tom Vander Woude said. "This is a large project. As a planned unit development it would be on par with Centennial Village, but I don't know that we've had a project this size with a single user other than a hospital."

The brewery complex at 9750 Indiana Parkway is now 57,000 square feet, and including a newly built distillery from the last expansion that started in 2014. 3 Floyds is asking the town to let it tear down the neighboring Architectural Accents building and expand its building in all directions to include 114,423 square feet of manufacturing and warehouse area, 7,442 square feet of retail area, 7,356 square feet of brewpub and restaurant space, and 7,668 square feet of office space, according to documents filed with the Munster Plan Commission.

50 craft beers of the South Shore

This series, 50 Craft Beers of the South Shore, highlights an interesting brew from Region breweries. Here's a look at what we sampled. Cheers!

It also would add more office space and a drive-up area where people could drop off their dinner companions or pop out to grab a 22-ounce bomber or six-pack.

The expansion would double the size of the brewpub and dramatically expand the retail area, which is now essentially a counter where people walk up to ask for bottled beer to go or 3 Floyds merchandise like stickers or the Alpha King comics Nick Floyd created for Image Comics with esteemed comics creators Brian Azzarello, Simon Bisley and Ryan Brown.

3 Floyds also wants to build a 16,706-square-foot terraced garden for outdoor dining at the southeast corner of the site, which would be fenced off, and add 283 more parking spaces.

Vander Woude said the craft brewery hoped to start construction as soon as possible, but there are still procedural steps to clear.

A public hearing with the Munster Plan Commission will take place at 7 p.m. Feb. 27 at Town Hall.

The town is working to expedite the project so it can move forward quickly, he said.

"It's a great example of a mixed use project. On the one hand, you have industrial development that creates the manufacturing jobs the state hopes to attract" Vander Woude said. "But it also is a major amenity for the community where you can get world class beer in a beautifully designed environment. "

The craft brewery did not return messages.

Sunday retail alcohol sales could be just weeks away

INDIANAPOLIS — Hoosiers may get to buy alcohol on Sundays for at-home consumption sooner than originally expected.

Munster working to create a downtown

MUNSTER — Springhill Suites at Marriott is up and running to great reviews at Centennial Village along Calumet Avenue, and a new Pittsburgh-ba…

3 Floyds gets approval from Munster for ‘world-class facility’

After Dark Lord Day this year, 3 Floyds will embark on construction of a major expansion that will more than double its space, submerge its br…

3 Floyds distillery to open this fall

Northwest Indiana's biggest office tower is getting a massive, multimillion-dollar overhaul as the owner looks to draw in new tenants.

Off Square Brewing canning, distributing after less than a year

Northwest Indiana's newest craft brewery, Off Square Brewing in Crown Point, hadn't planned even to look at distribution until after it had a …

3 Floyds' Zombie Dust ranked among best in the United States

Some of the best beer in the United States is brewed right in Northwest Indiana.

Lear Corp., the auto supplier with a seat factory in Hammond, posted record sales and profits in the second quarter.

Here's a recap of the 10 most-read business stories of the year.

Culture and Craft in Northwest Indiana

Route 2 Brews owner Christopher Fast told The Times in 2014 when he and his wife, Gwendolyn Fast, opened their craft brewery and taproom, "I f…

18th Street Brewery to open a distillery in Hammond

Region drinkers have a reason to raise a toast — the acclaimed 18th Street Brewery plans to open a distillery to make artisanal liquors.

Podcast to do live show at Valpo's Franklin House

"This Podcast is Garbage," a long-form conversation/interview podcast about cool things going on in the Region, is doing its first live show F…

Munster-based Three Floyds partnered with the Danish brewer Mikkeller on the WarPigs Brewpub that opened in Copenhagen in 2015.

Developers broke ground on a new upscale condominium building at Centennial Village in Munster, the first of four residential buildings planned for the site on Calumet Avenue.

A rendering of the proposed 3 Floyds headquarters in Munster is pictured. 3 Floyds has filed plans with the town of Munster that would more than double its size to over 136,000 square feet and add a terraced garden.

A rendering of the expanded 3 Floyds campus proposed in Munster is pictured. Plans call for more green space and al fresco dining.

A rendering of the proposed expansion of 3 Floyds headquarters, which would be more than twice as large as the current facility.

A rendering of the expanded 3 Floyds headquarters, which would be more than twice as large.

A rendering of the proposed 3 Floyds brewery in Munster is shown.