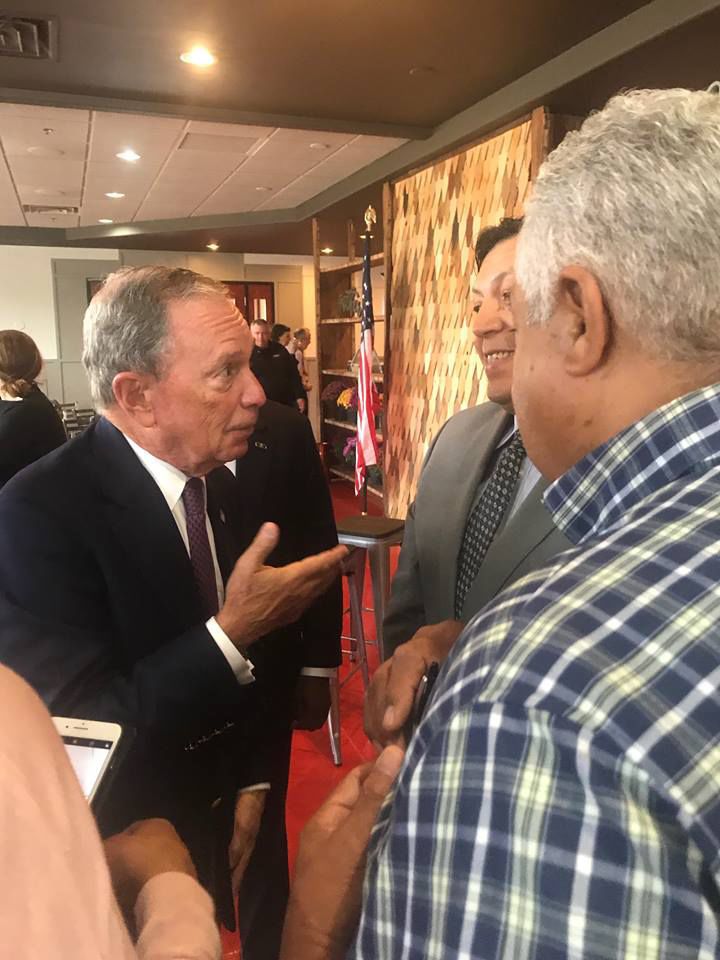 Michael Bloomberg (left) visited the ArtHouse: A Social Kitchen, which his Bloomberg Philanthropies funded in downtown Gary, on Monday. 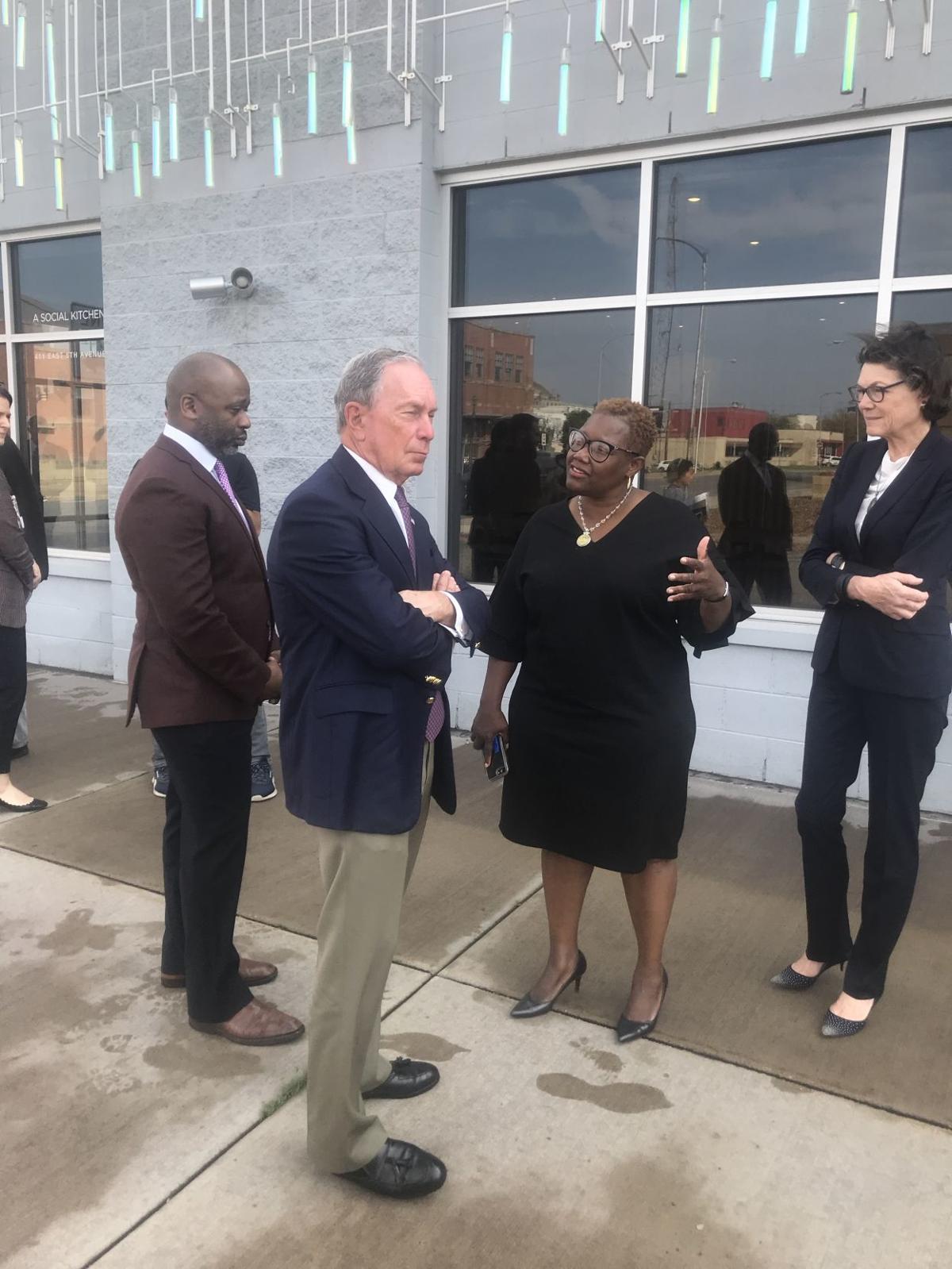 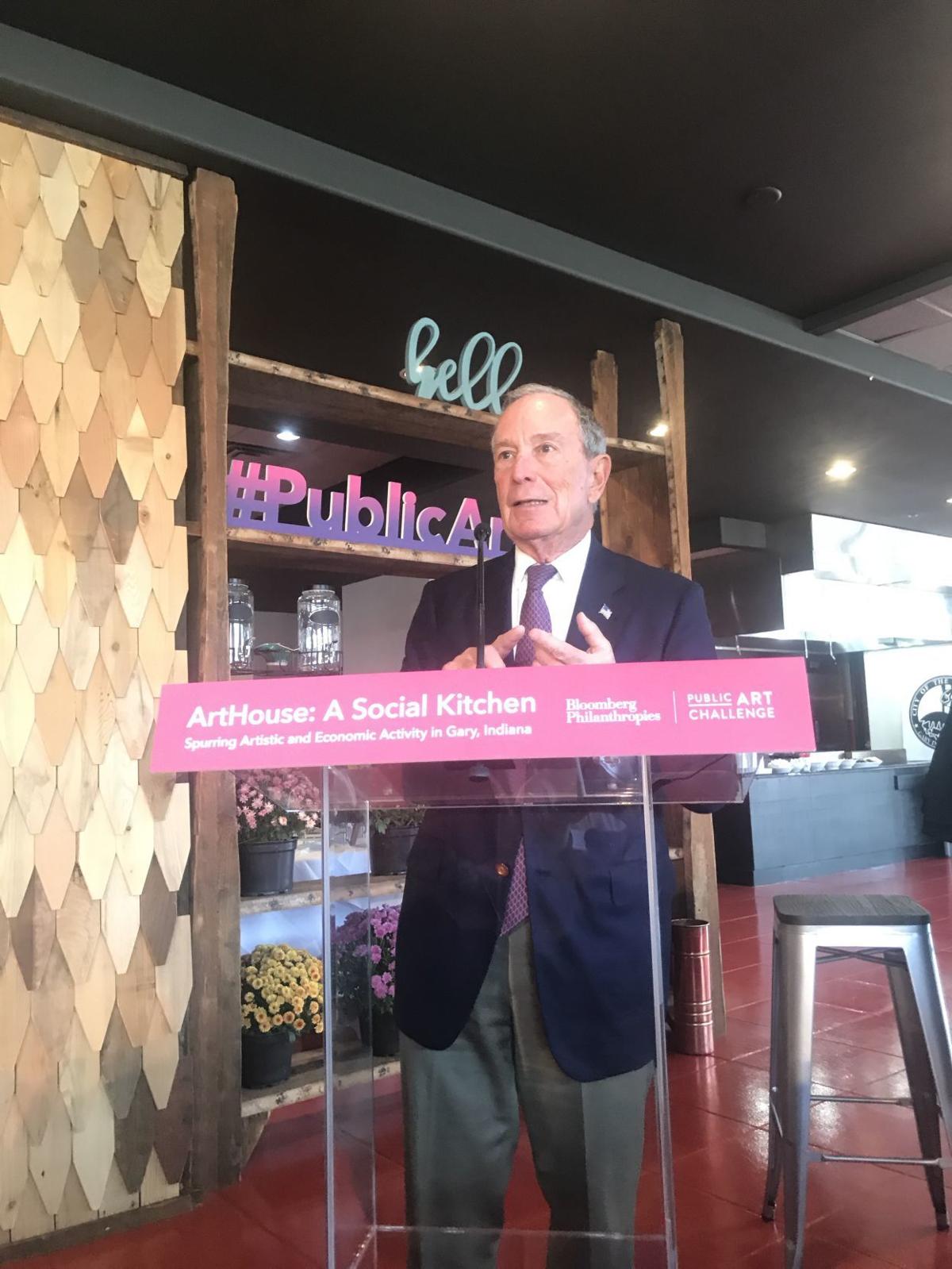 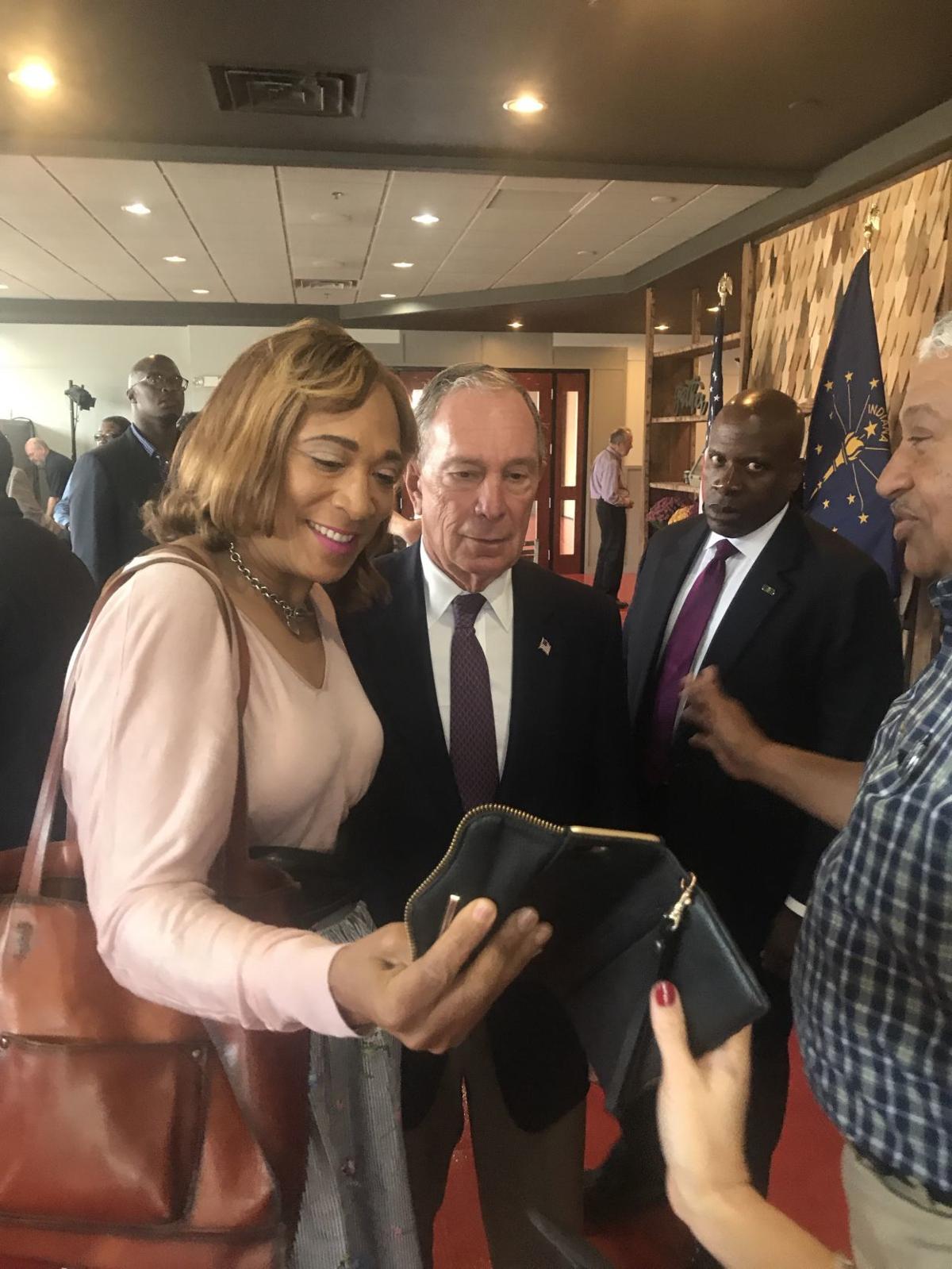 Bloomberg teased a possible run at the White House in 2020 and touted his philanthropy, including the $1 million that Bloomberg Philanthropies furnished to create the ArtHouse community space and art gallery at 411 E. Fifth Ave.

"We're spending $700 million on philanthropy this year, and it will be even more next year," he said.

Bloomberg took part in "a conversation about entrepreneurship, community building, and using nonprofit culture as a driver of urban revitalization" with Gary Mayor Karen Freeman-Wilson and artist Theaster Gates at ArtHouse, which won the Bloomberg Philanthropies Public Art Challenge in 2015 and is now looking for a way to become sustainable after the grant funding runs out.

Designed by Gates, the civic center has trained culinary entrepreneurs and provides an array of cultural programs, such as gospel choir concerts, poetry readings, film screenings, classes and tastings with local chefs.

"I wanted them to think of arts philanthropy beyond the monument," Gates said. "This could be a platform, a space for cooks, chefs, artists and gospel choirs. It would be the plinth, the thing before you got to the thing. I wanted it to be a trampoline to get some momentum."

Gates was specifically concerned that years of disinvestment left the city with nearly 80,000 residents but only 30 restaurants, and he hoped to train culinary entrepreneurs who could open new businesses across the city.

Freeman-Wilson said the culinary incubator, which is about to accept another class this summer, already yielded some successes, such as training the entrepreneurs behind Foody's restaurant and Love Tea, which is made in Gary and sold in nearly a dozen Chicago restaurants.

“I am proud to collaborate on arts and cultural projects that play a vital role in Gary’s development and place-making," she said. "ArtHouse has helped to fuel entrepreneurship and innovation in the city that complements our ongoing rebuilding efforts in areas like jobs, infrastructure, education and public safety.”

The new Rancifer and Ross restaurant opened just across the street, where it has posted several signs touting $2 margaritas.

Bloomberg said the goal of the public art challenge was to fund ideas for revitalization that other cities could copy.

"ArtHouse stands out as a powerful example of the value of partnerships between city governments and the creative sector," Bloomberg said.

Bloomberg Philanthropies helped fund similar creative projects in Los Angeles, New York state and South Carolina that provided 490 public programs and generated $13 million in economic impact. It recently announced the 14 finalists for the this year's round of funding.

"This is a very big, very diverse country," Bloomberg said. "People's experiences, perspectives and levels of wealth are all over the map. If we want to make America the great union the Founding Fathers wanted, we have to work together. What Bloomberg Philanthropies does is pull people together."

When asked, he said he would explore a presidential run, giving what Freeman-Wilson called "a firm maybe."

"I'll see at the beginning of the year if it's possible," Bloomberg said.

Though he served as mayor of New York City as a Republican for two terms and an independent, he said that if he does decide to seek the presidency he likely would run as a Democrat. He said his values were more Democratic since there are "no Republicans" in his home state of Massachusetts or his longtime home of New York City.

Bloomberg said he's otherwise been occupied running his company, which employs 20,000 at 70 offices around the world, serving as a special envoy on climate change for the United Nations, and making philanthropic donations to arts, education and the environment.

The eighth wealthiest American, according to Forbes magazine, also shared a secret to his success, saying he would rather hire someone from a rough background who put himself or herself through a local college while working three jobs than a well-pedigreed Harvard graduate.

"They say you can always tell who the owner is because they're sweeping up after everyone has left," he said. "Be the first one in and the last one to leave. Chances are you are not going to be the smartest. Someone can always beat you at that, but they can't beat you on how long you work. I was once asked what the worst job I've ever had was, but I've always enjoyed working. You want to get there earlier and stay later."

Purdue students to perform 'The Colored Museum' in Gary

Sculptor Carmella Saraceno, who lives in Gary's Miller neighborhood and Chicago, is exhibiting her art at a Chicago gallery.

A company is making premium handcrafted teas and lemonades in downtown Gary for Chicago restaurants.

Julius Hill, a Gary resident who founded the Elka Child Educational Center day care in Gary in 1972 and The Melmedica Foundation to help child…

A Gary artist who recently boomeranged back to Northwest Indiana will show his work at the SideCar Gallery in Hammond.

Unemployment has been falling more or less steadily across the state and nation since the depths of the Great Recession a decade ago, and now …

Gary is asking former residents to contribute to efforts to revitalize the city as it marks its 112th year in existence.

Michael Bloomberg (left) visited the ArtHouse: A Social Kitchen, which his Bloomberg Philanthropies funded in downtown Gary, on Monday.