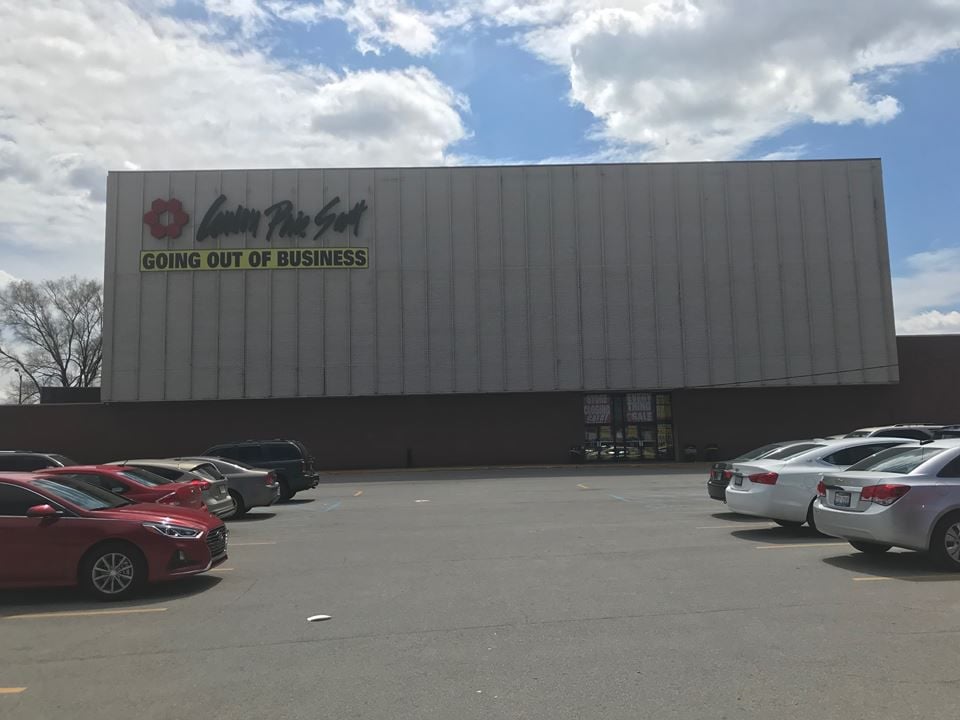 The Carson's at the former Woodmar Mall in Hammond is likely to be torn down. 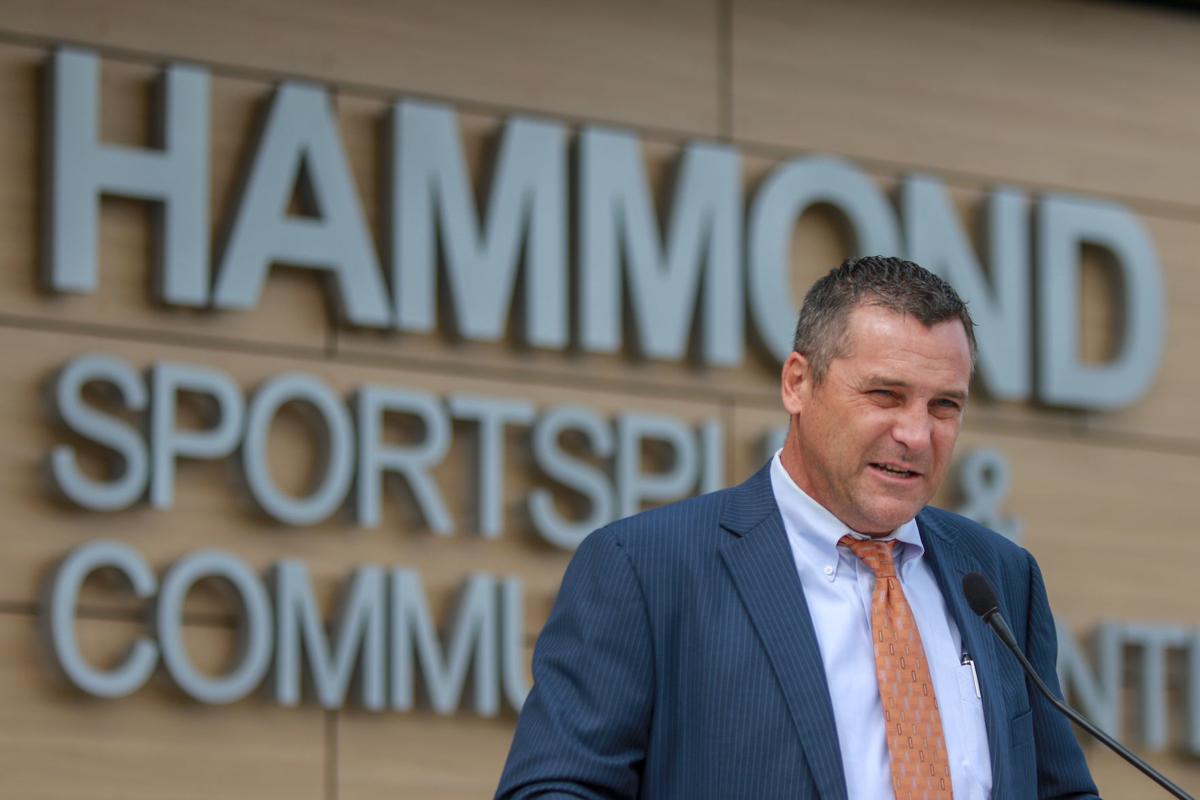 Hammond Mayor Thomas McDermott Jr. addresses guests in September at the opening of the new Hammond Sportsplex. McDermott said recently that the city may demolish the nearby former Carson's department store to make room for development complementing the sportsplex.

The Carson's at the former Woodmar Mall in Hammond is likely to be torn down.

Hammond Mayor Thomas McDermott Jr. addresses guests in September at the opening of the new Hammond Sportsplex. McDermott said recently that the city may demolish the nearby former Carson's department store to make room for development complementing the sportsplex.

Carson Pirie Scott opened in Hammond in 1954 as the anchor to the Woodmar Mall, a V-shaped mall at Indianapolis Boulevard and 165th Street that was one of the first designed by the pioneering Austrian architect Victor David Gruen, who went on to design more than 50 shopping malls across the country from the 1950s through the 1970s.

Carson's was expanded from 115,000 square feet with the addition of a third floor a decade later, around the time the mall was enclosed.

The once thriving mall lost ground after the 1.3 million-square-foot River Oaks Center opened in neighboring Calumet City in 1966 and the super-regional Southlake Mall opened in Hobart in 1974. After years of decline, the former home to the Court of Lions, the Court of Turtles, J.J. Newberry, Woodmar Records, Schoop's and red neon signage that lit up the food court had fewer than a dozen remaining businesses.

With issues like a leaky roof and sewage problems, Woodmar Mall was demolished in 2006.

The neighboring Hammond SportsPlex, a state-of-the-art $17 million facility for youth sports, has proven to be a big draw since opening in early October. The city already owns the 64-year-old Carson's building, having served as its landlord, and will likely raze it to make way for complementary development, such as hotels and restaurants.

"I would say there's a 98 percent chance of demolition," Hammond Mayor Thomas McDermott Jr. said. "A lot of people miss Carson's, and my wife and I shopped there, but if there's a saving grace, it's that it will help the community go forward."

Carson's closed for good in August as its parent company The Bon-Ton Stores went bankrupt after failing to turn an annual profit since 2010.

Merrillville-based CSG Generation acquired the rights to Carson's and to Bon-Ton's intellectual property and is reopening a brick-and-mortar Carson's in suburban Chicago. But the ownership has not reached out to Hammond about reopening the Woodmar location, and Hammond was not on the initial list of stores CSG Generation planned to reopen.

McDermott is not sure he would be interested anyway.

"It's unfortunate what happened, but we want to look forward, not to the past," he said.

Department store chains across the country have been going bankrupt or closing locations, so it's extremely unlikely another retailer would come in to take a space that large.

"I was trying to buy a nice suit coat the other day and I went to five different stores and none of them had it, so I had to buy it on the internet," he said. "It's becoming harder and harder for stores. Drive down to Highland and you see the empty Dick's Sporting Goods and the empty Borders in a perfectly good shopping center. Retail is going to get worse before it gets better, and a temporary Halloween costume shop in a big-box store isn't going to cut it."

Carson's itself had been looking to downsize and move to the former Walmart nearby before it went bankrupt.

"A three-story building like that was built for the 1950s," McDermott said. "The energy bills are huge, the overhead is huge. It's too big. Even Carson's didn't want to be there anymore."

The future, as McDermott sees it, is the Hammond SportsPlex, a 135,000-square-foot complex with indoor soccer fields, basketball courts, and volleyball courts.

"It's going to be bustling nine months of the year," he said. "The parking lot has been jam-packed."

McDermott envisions development similar to the Oxbow Landing just off the Borman Expressway. Hotels would give visiting families somewhere to stay while the kids played in travel tournaments, while restaurants would give them somewhere to eat between games or celebrate big victories.

"We can build off the momentum of the city investment," he said. "It's now the city's investment that's driving that neighborhood. We can redefine what that Woodmar Mall area is for another 20, 30 years."

After more than six decades, Region residents will no longer be able to head to Carson's, fo…

The beloved department store Carson's will live on to sell clothes, televisions and dining t…

Though headquartered in Merrillville, the new owners of Carson's have no immediate plans to …

Carson's new owner, the parent company of Merrillville-based DirectBuy, plans to reopen the …

Geoffrey the Giraffe hits the unemployment line next week.

COLUMBUS, Ohio — On the banks of the shallow but shimmering Scioto River, across from the towering, scattered skyscrapers in the central busin…

Old Chicago Pizza & Taproom on U.S. 30 in Merrillville has lost a lot of its neighbors: the Star Plaza Theatre, the Radisson at Star Plaza…

A report from Ball State University cautions the economy in Indiana may start to slow.

Highland has thrown up several brightly colored murals on the walls of downtown buildings in recent years, and now it's looking for a public s…

Vacant Hammond Carson's being torn down to make way for redevelopment

HAMMOND — After 65 years, the Carson's department store that long anchored the Woodmar Mall is coming down, marking the end of an era in Hammo…