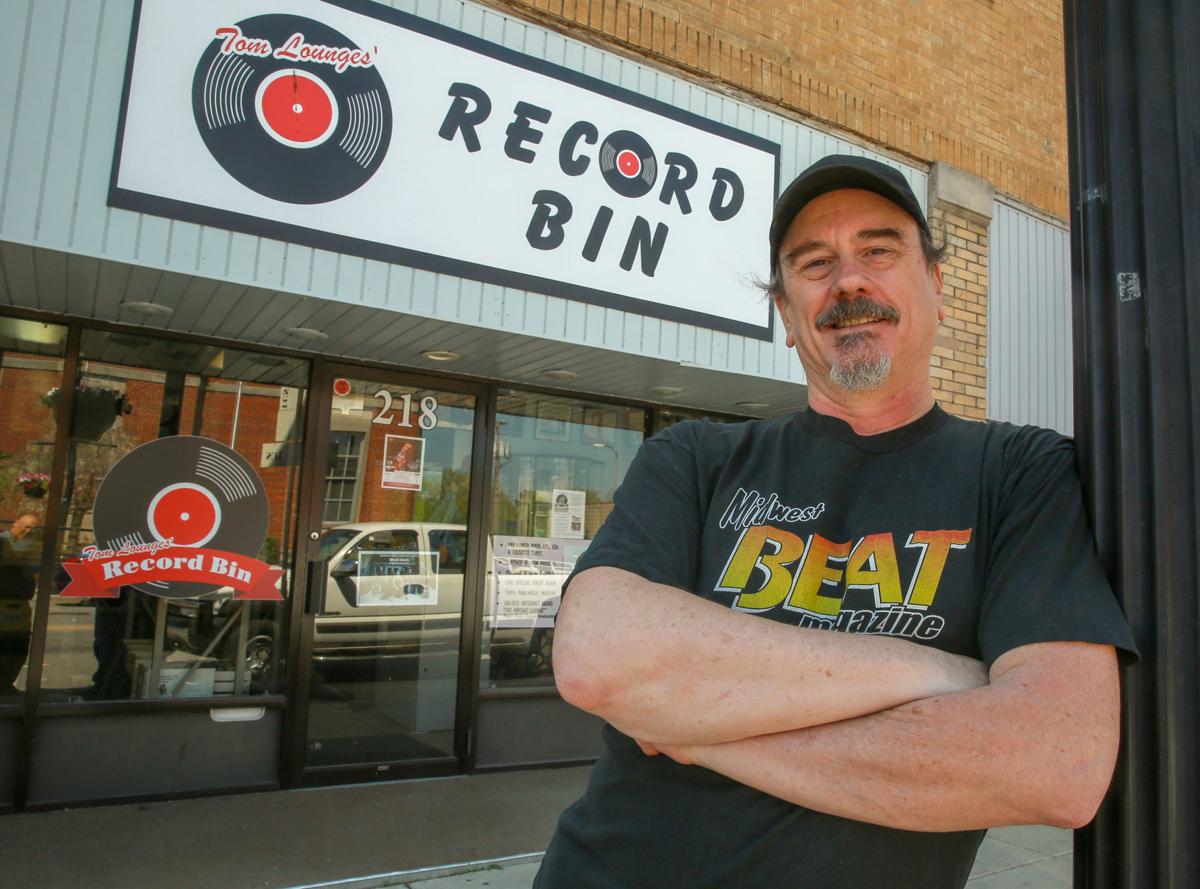 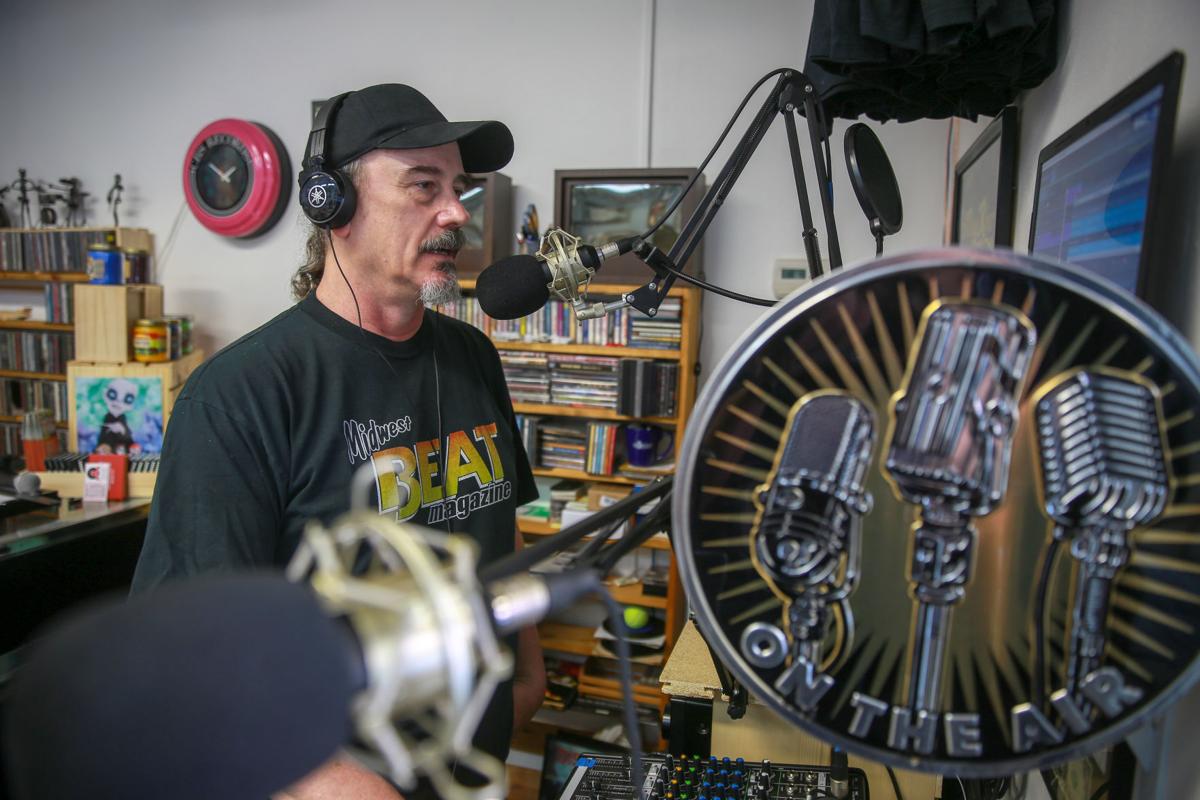 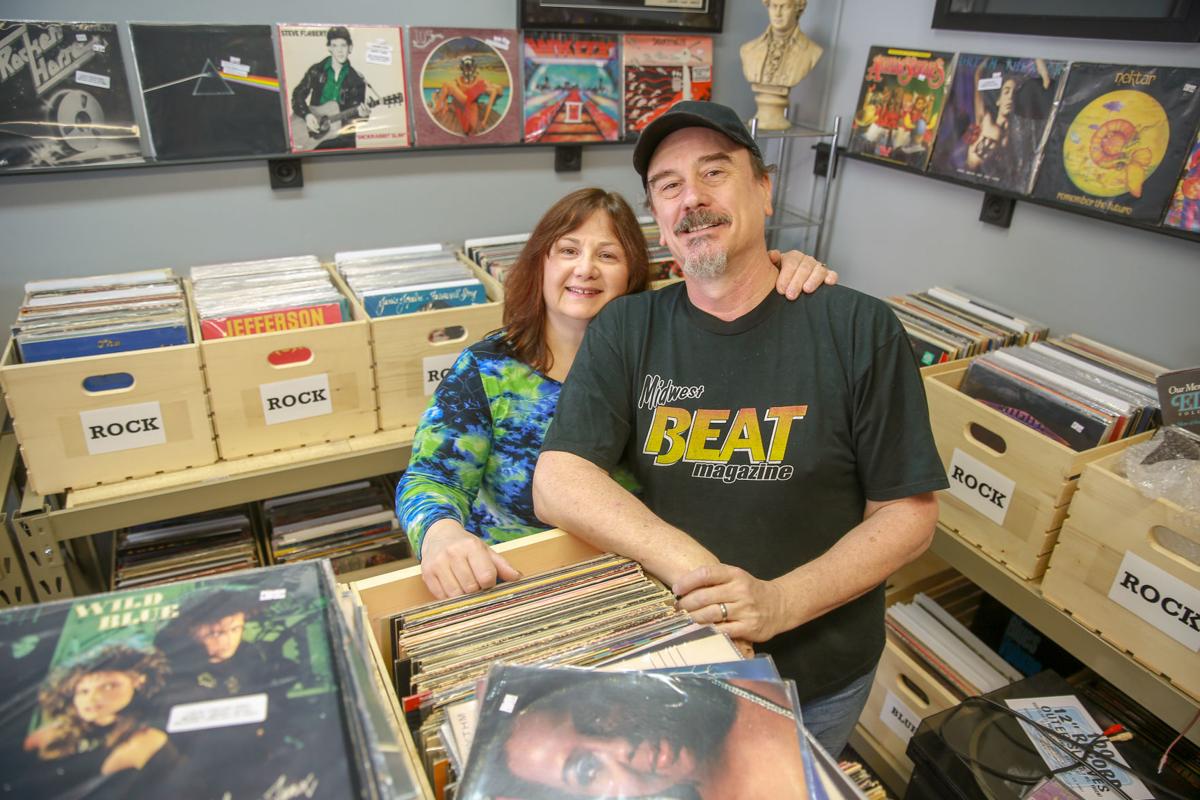 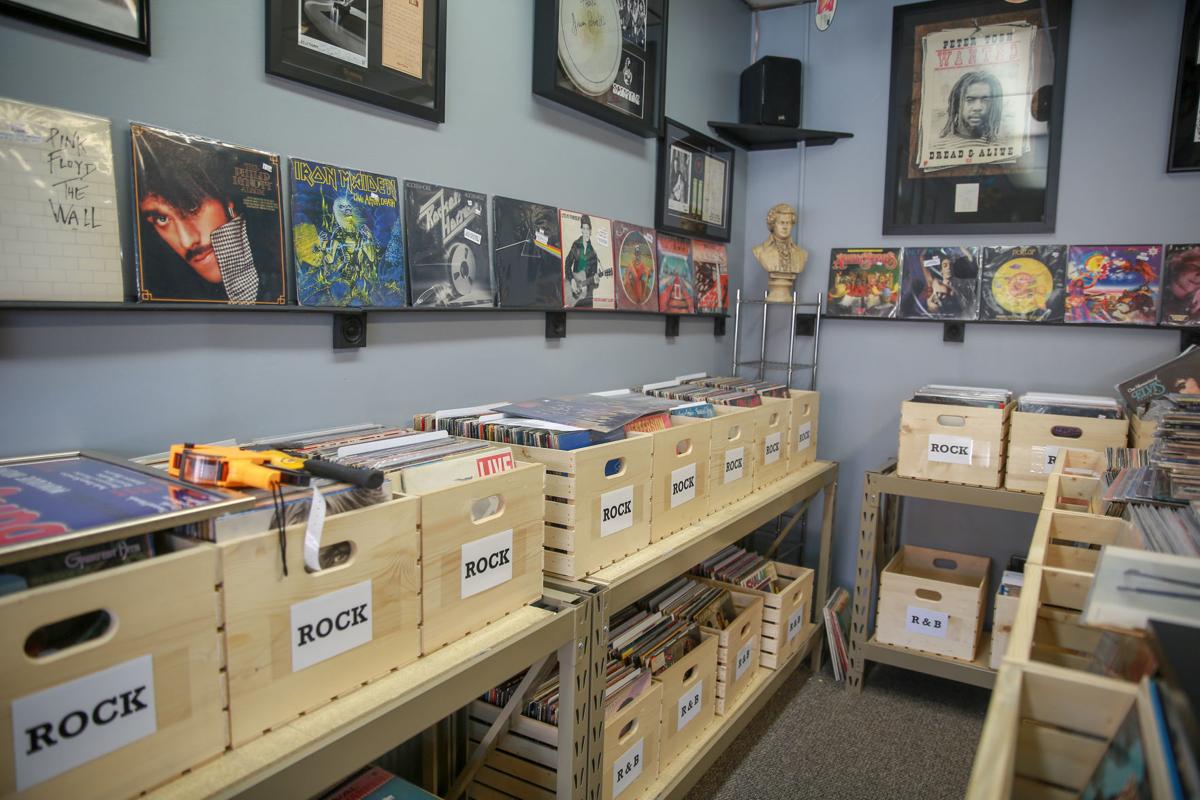 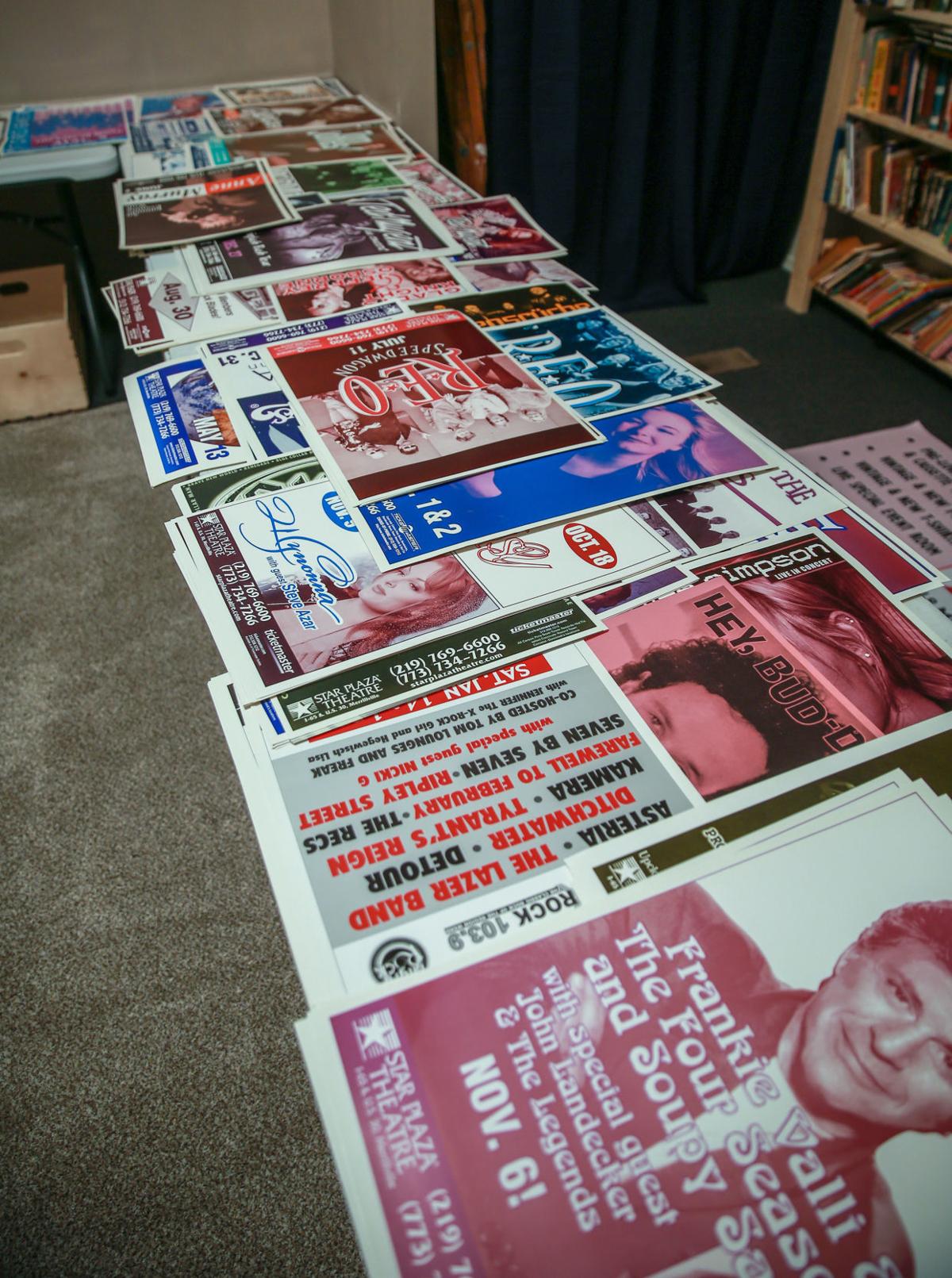 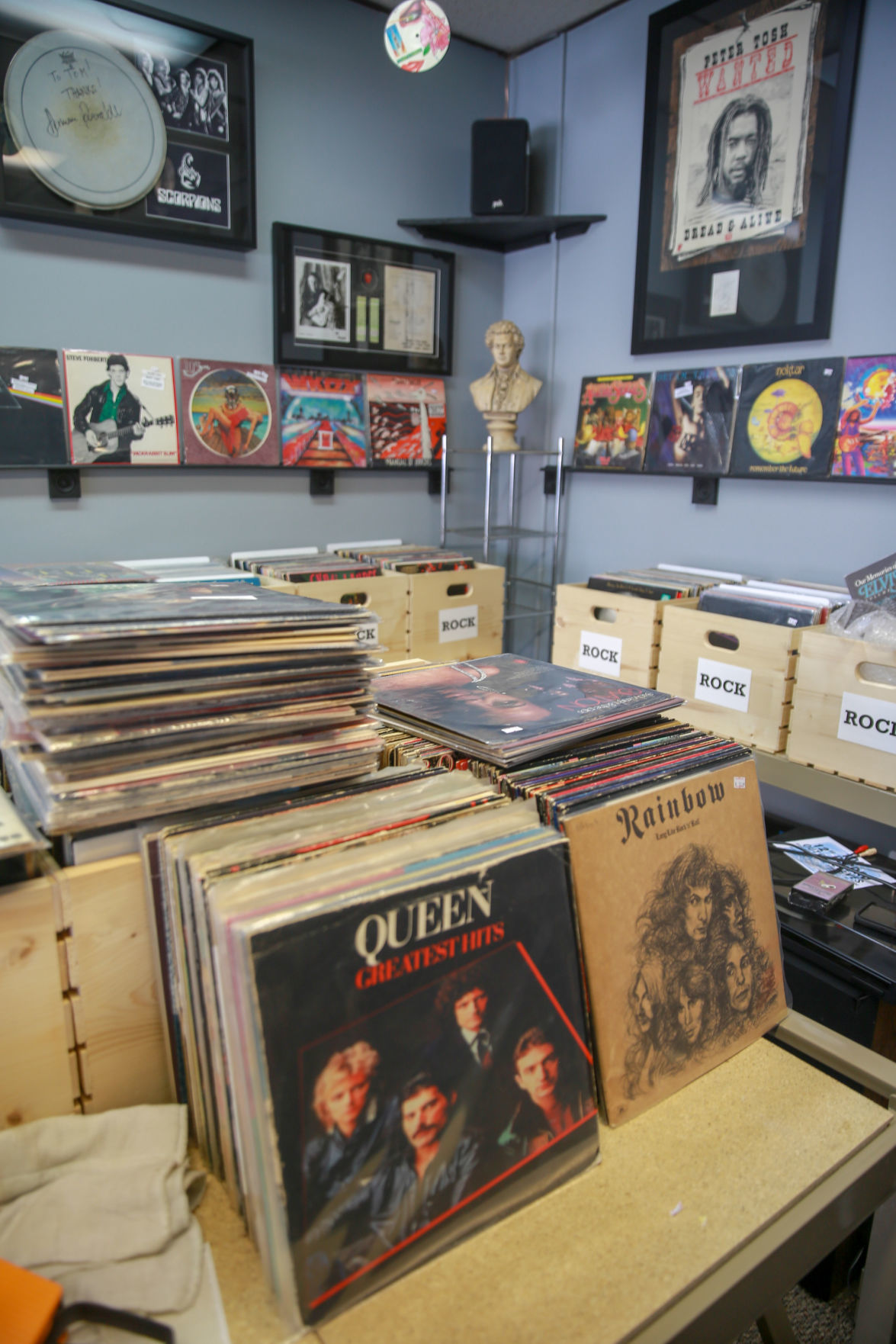 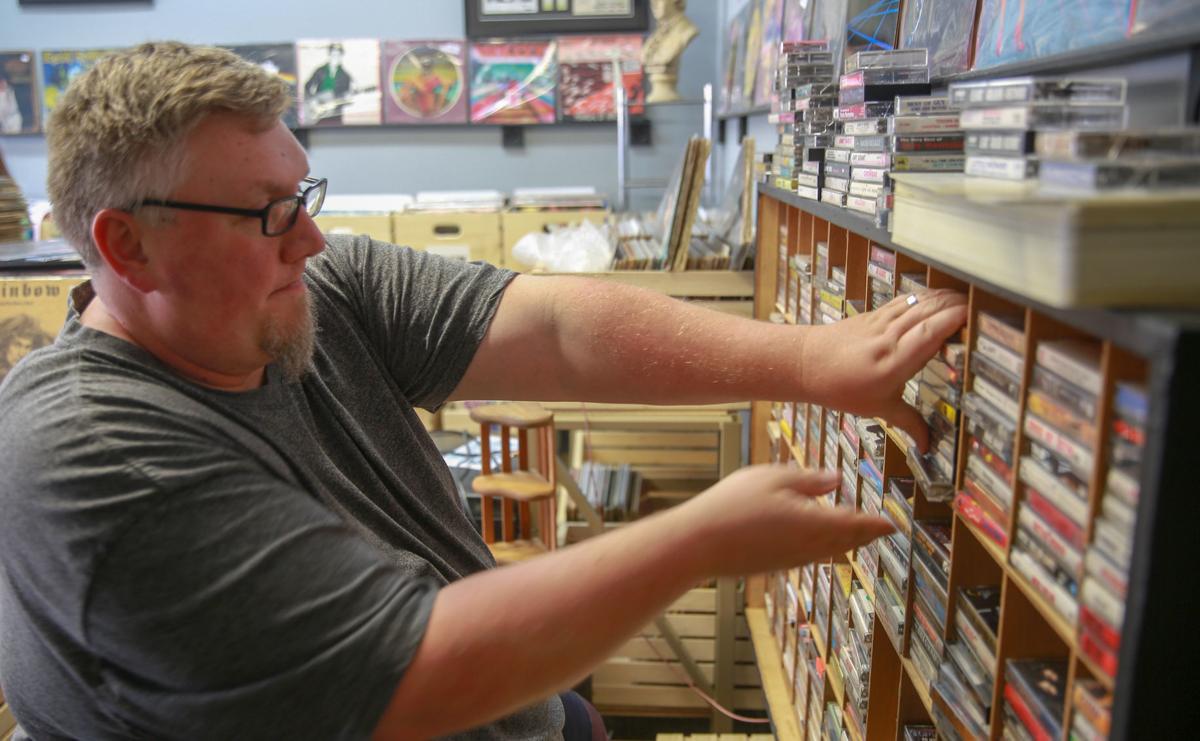 Northwest Indiana music legend Tom Lounges has amassed a massive record collection in his decades-long career of writing about, talking about, booking and promoting musical acts.

Now he's putting his gently "pre-loved" vinyl records, as well as CDs and cassettes, up for sale at the Tom Lounges' Record Bin in downtown Hobart. The new record store, which opened Friday at 218 Main St., doubles as a mini museum with posters and other music memorabilia and a live 24/7 online radio station, Lounges DJs, at regionradio.live.

"It has a rock focus, but we'll sell all kinds of music, including easy-listening, oldies, comics, R&B, metal, hip hop, country, dance albums and waltzes," Lounges said. "But it's primarily rock."

In an age of Spotify and streaming, the renaissance of vinyl has been a livesaver for Region music stores such as Illiana Music and Media Exchange in Lynwood and S&J Stereo in Griffith, a longtime stalwart that now almost exclusively sells vinyl records.

New vinyl shops, like Region Records in Griffith and Antique Vault & Records in the basement of the Old Courthouse in downtown Crown Point, even have opened in the last few years.

For Lounges, it's a return to where he started his long, distinguished career — at shops like Hegewisch Records and Woodmar Records. He went on to write for national magazines, author liner notes for a dozen Sony Records albums, pen a weekly column for The Times, host radio shows at Lakeshore Public Radio and other stations, publish the Midwest Beat Magazine for more than two decades, run the Tom Lounges Entertainment booking firm, and lecture at many colleges throughout the Chicago area.

He will continue broadcasting at a radio booth on the "Vintage Lounge" channel on regionradio.live. It airs around the clock, rotating through a curated selection of around 12,000 songs on autopilot with brief station identifiers Lounges recorded. He will sometimes go live from the store and said he might invite customers to be interviewed on-air.

"If someone buys a David Bowie album, I might ask when they first heard Bowie, why they liked that album and what's their favorite song on it," he said. "I'm old school and like to talk to people. We can play conversations live on the air on the internet."

He's starting the store with his personal record collection, about 50 crates filled with 120 records each, which he'll build upon in the future. He said his albums are in pristine condition and he plans to sell them for between $1 and $80, depending on the value and rarity. He plans to deliberately undercut prices online, to give collectors a reason to visit the brick-and-mortar store.

The record store also will sell a select few other items, including T-shirts and turntables.

A "mini museum" on the walls will display memorabilia, such as signed albums and posters from bands like Led Zeppelin, Metallica and The Scorpions. It will feature items previously exhibited by the Lake County Library Foundation, for which Lounges serves as a trustee.

He's planning special events, including acoustic acts playing early evening shows outside behind the store. He is partnering with a caterer to serve as a stop on the Hobart Chamber of Commerce's Downtown Progressive Dinner Thursday.

Tom Lounges' Record Bin will be open from noon to 6 p.m. Tuesday through Saturday, and will be closed on Sundays and Mondays. It also may be periodically closed during the week, such as when Lounges needs to record his show for Lakeshore Public Radio.

Lakeshore PBS hopes to be back on air this week

Lakeshore PBS has been off the air for two weeks but hopes to be back on the air — in at least part of Northwest Indiana — by the end of the week.

PBS and its member stations, including Lakeshore PBS, have unveiled a new PBS LearningMedia website that offers free resources to students and…

The Region currently has more than 1,100 manufacturing jobs available that could be filled within 30 days if the right candidates stepped forw…

Buona is opening its first Italian Beef restaurant outside of Illinois at 24 U.S. 41 in Schererville March 27, when it will be giving out Ital…

Zines have been having a something of moment in Northwest Indiana.

Creditors of Carson's parent company The Bon-Ton Stores are looking to buy and liquidate the regional department store chain, which employs 20…

The Crown Point-developed ShakeRate app, which lets people rate local bands to help them book venues in other areas, is now available to be do…

Tom Lounges — a journalist, DJ, radio host, emcee and promoter who's been a vital part of the Region music scene for decades — has opened a second record shop in Michigan City.