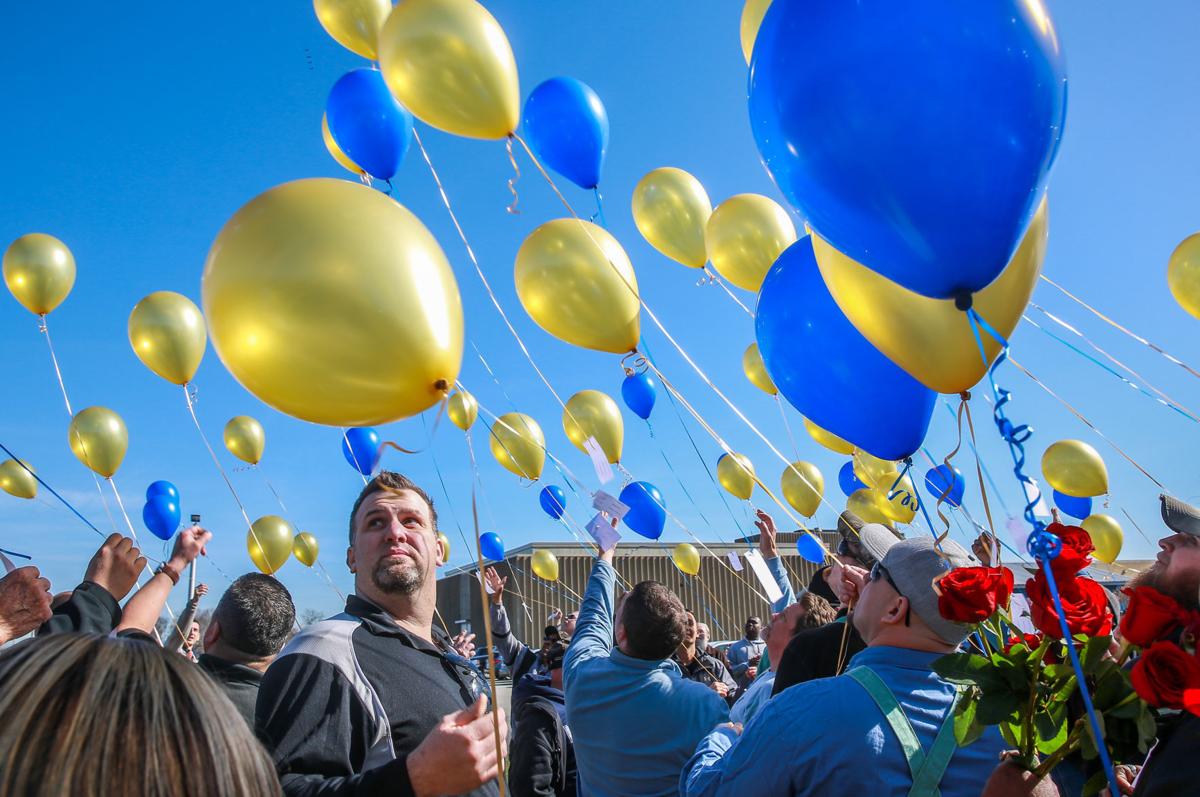 Following the Workers Safety Memorial ceremony Thursday, balloons are released in honor of those who died in steel mill accidents. 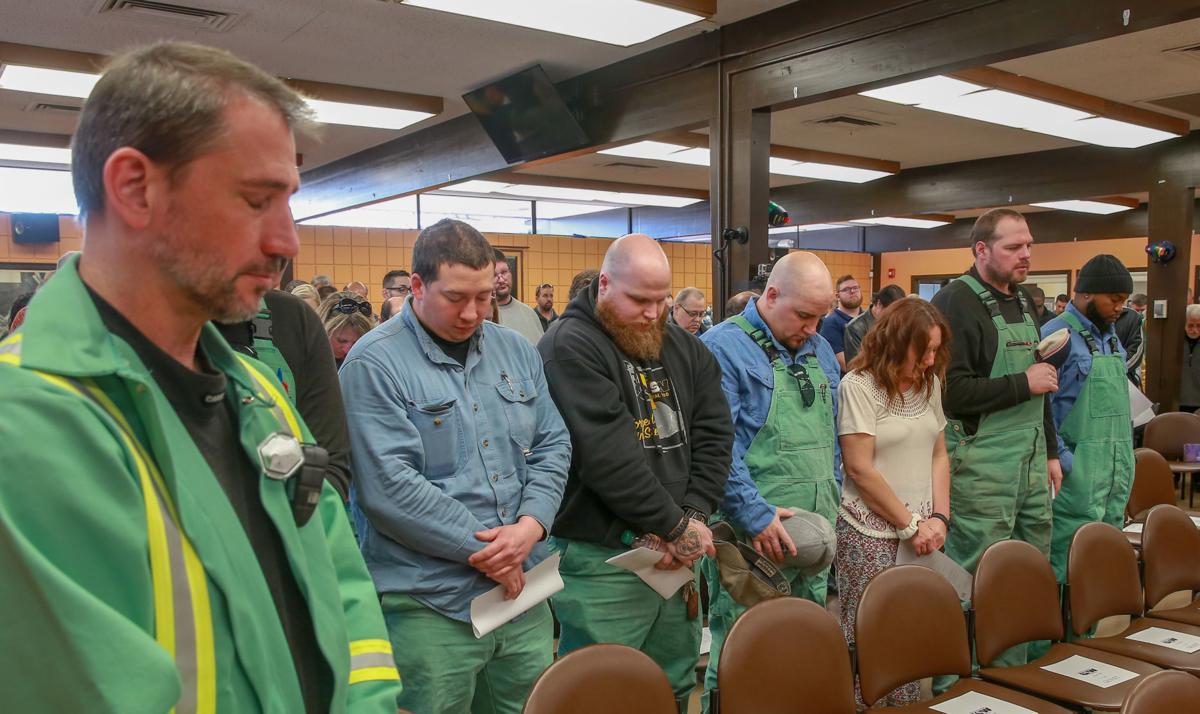 Bill Emery, left, and fellow steelworkers pause for a prayer at the Steel Workers Safety Memorial. 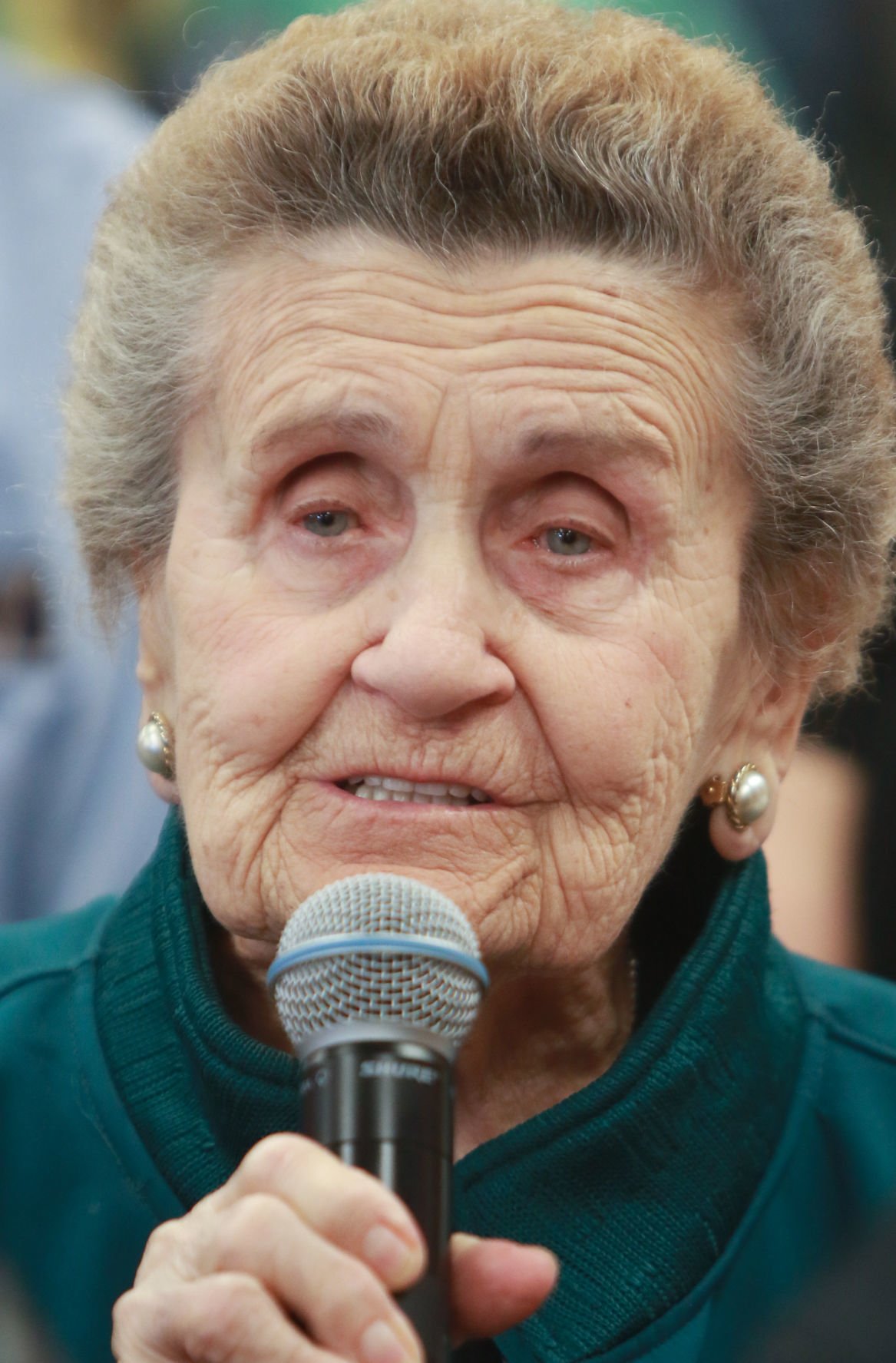 At the Workers Safety Memorial ceremony Millie Rytel talks about her late husband, Stefan Rytel, who died in 1973. 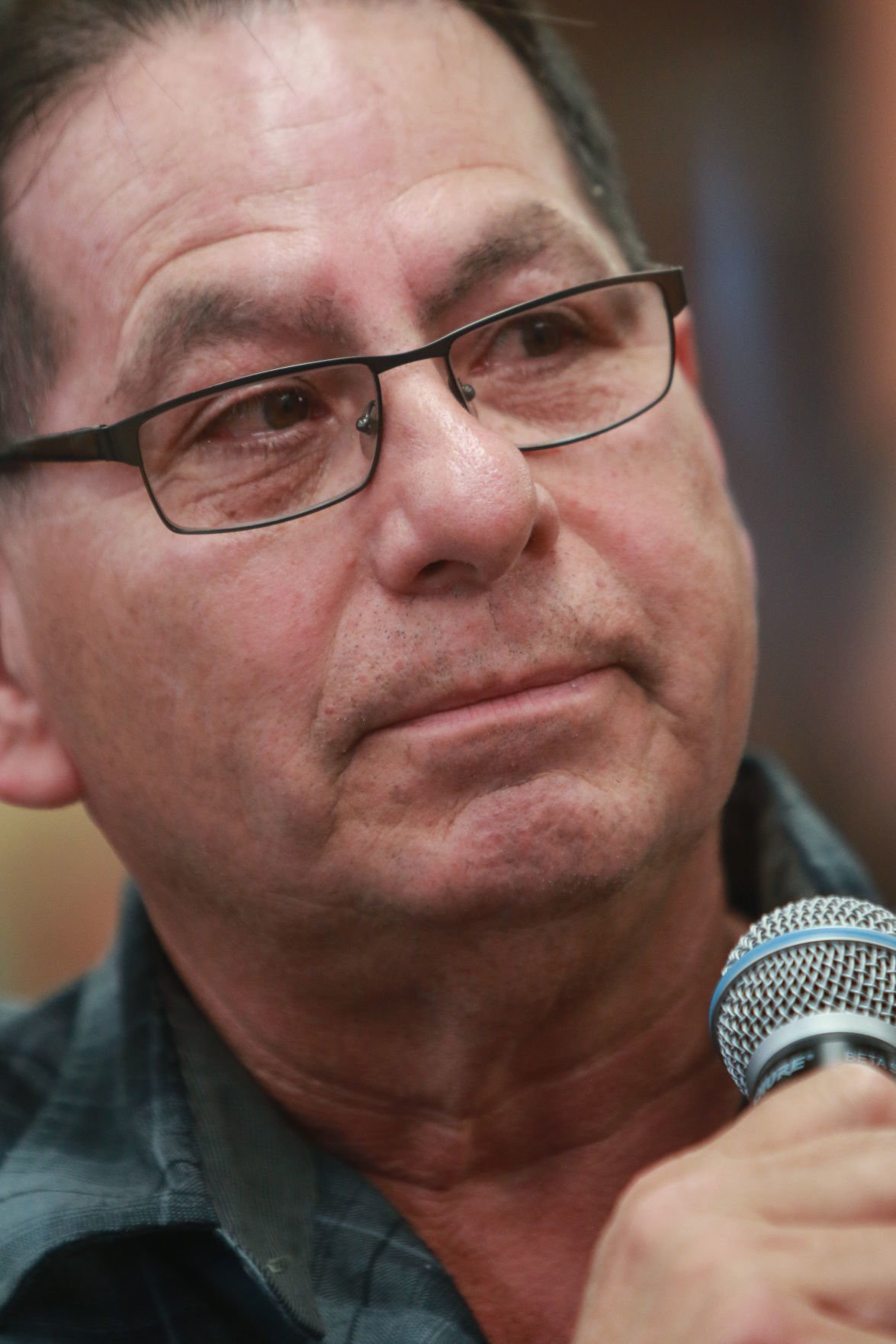 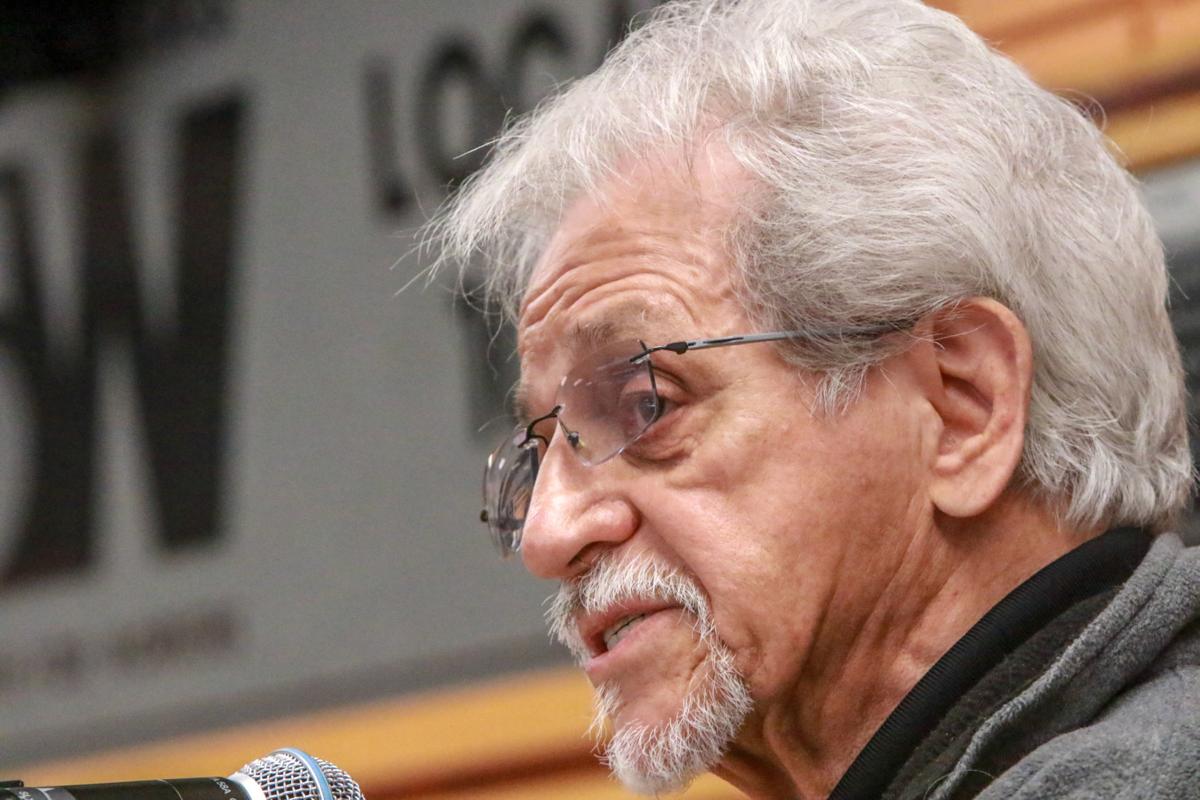 Joe Gutierrez gives the invocation at the Workers Safety Memorial. 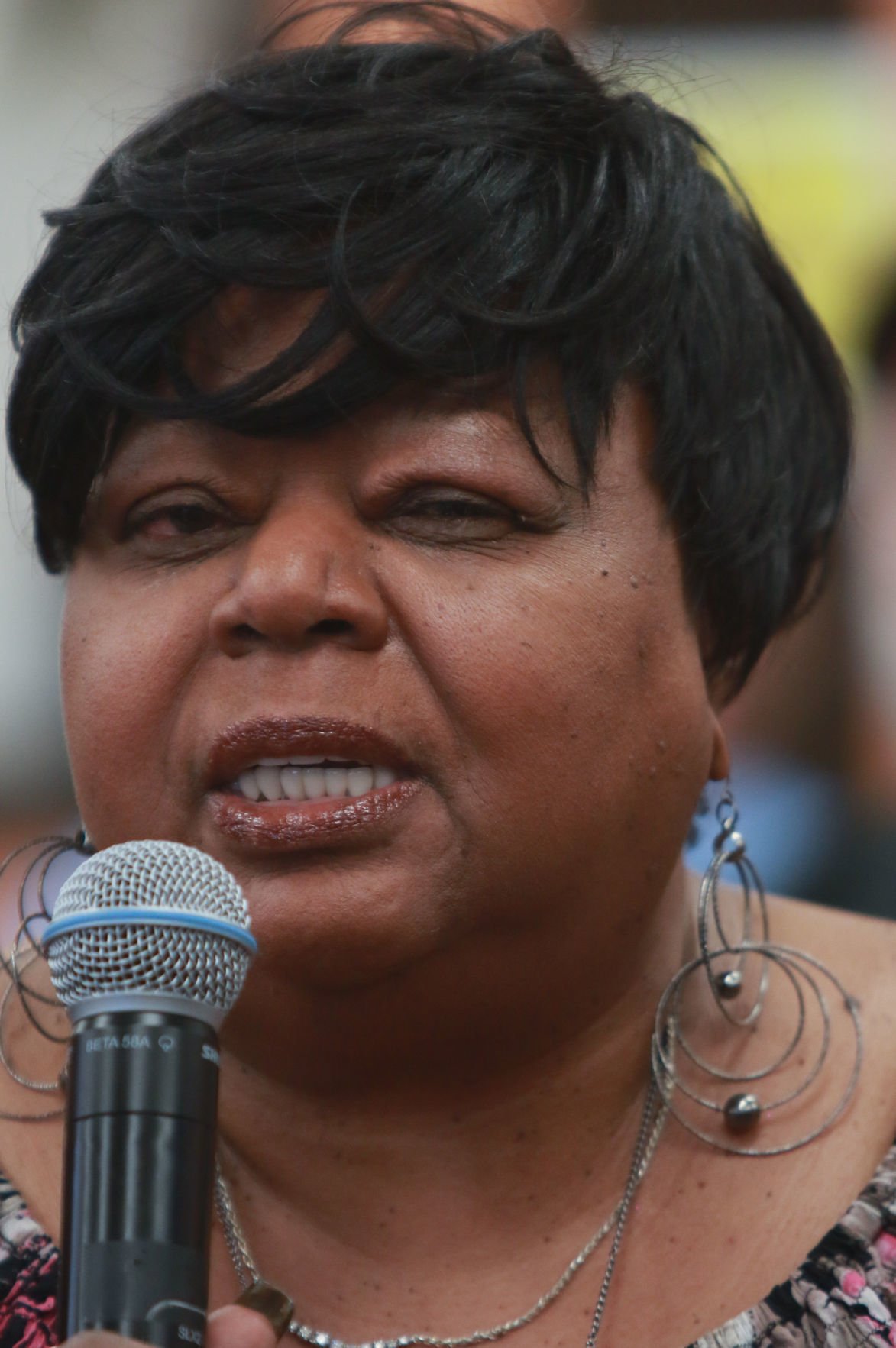 At the Workers Safety Memorial ceremony Janice Spenser talks about her late husband, Daniel Spenser, who died in 2005 . 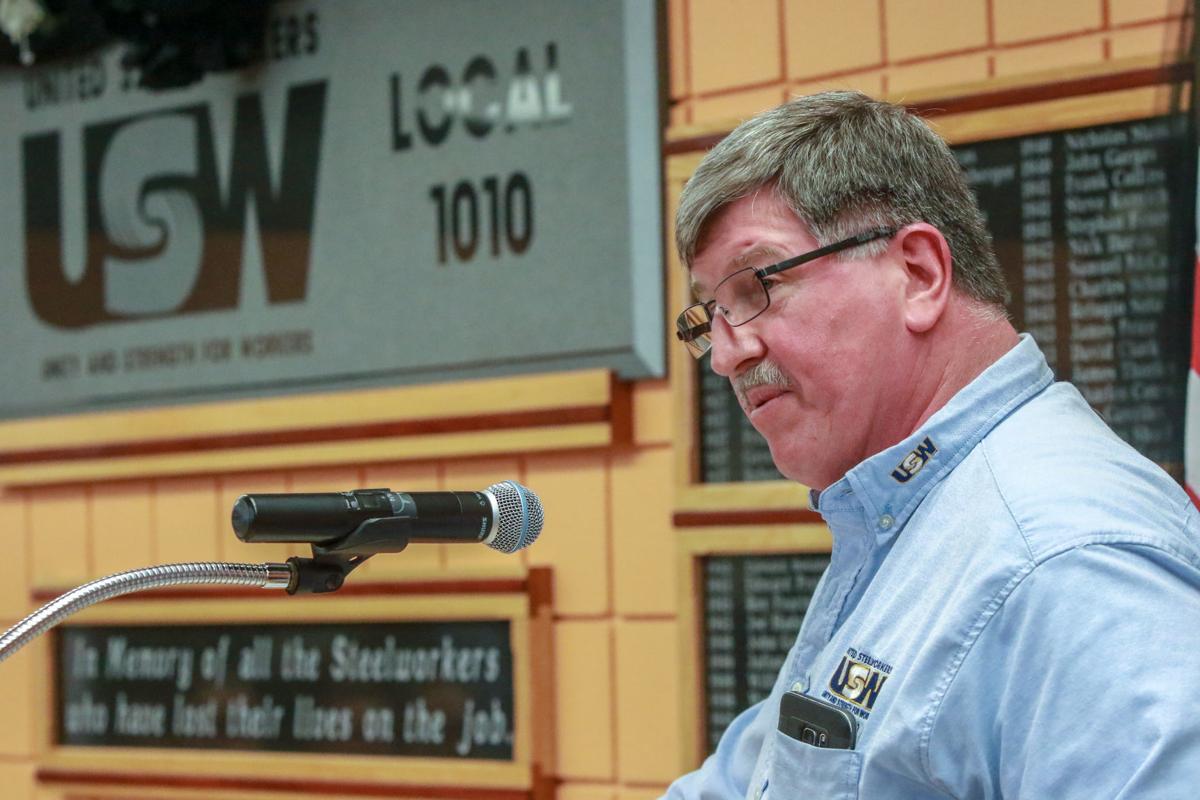 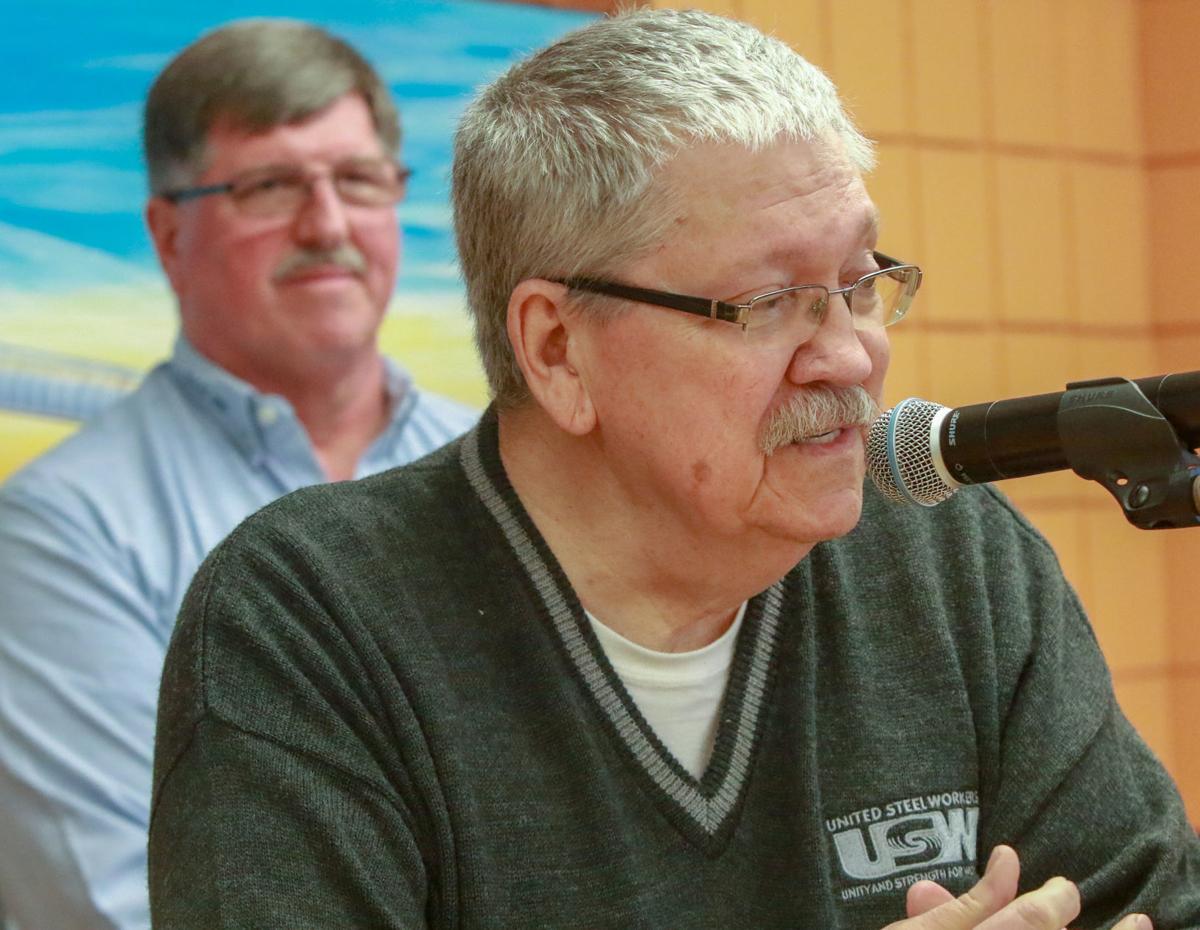 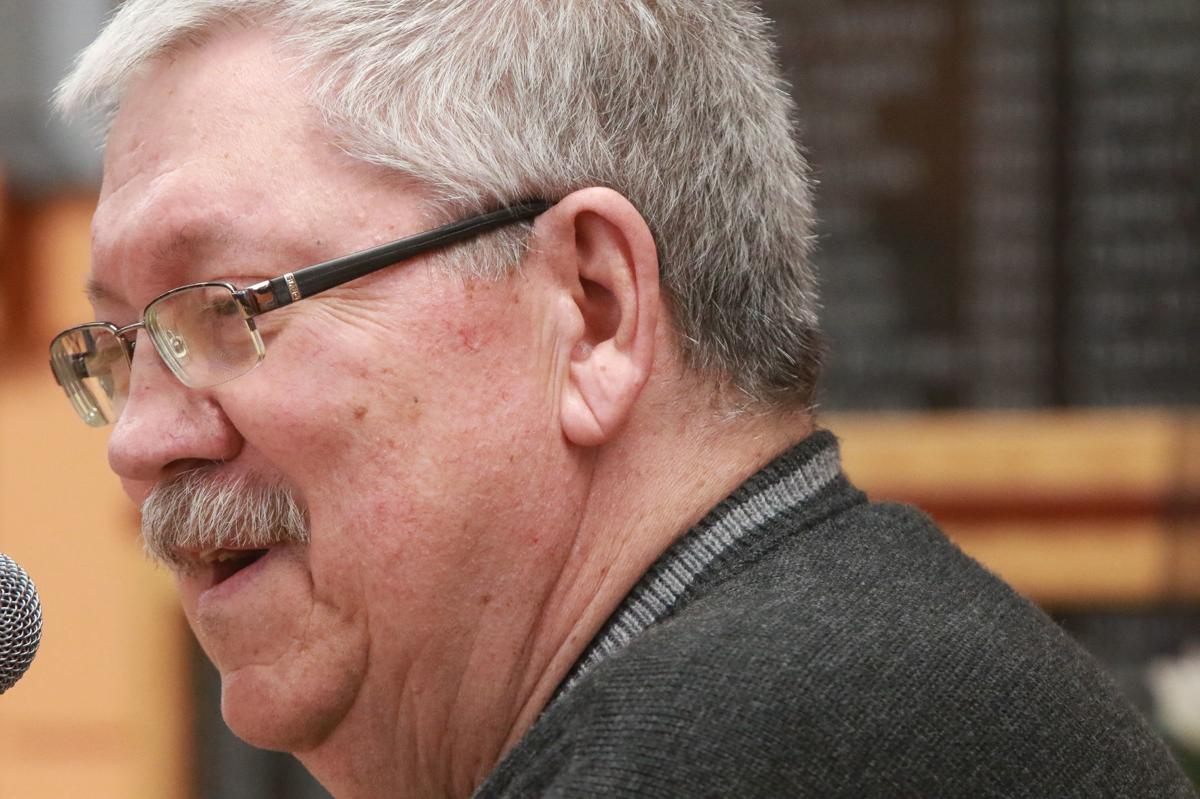 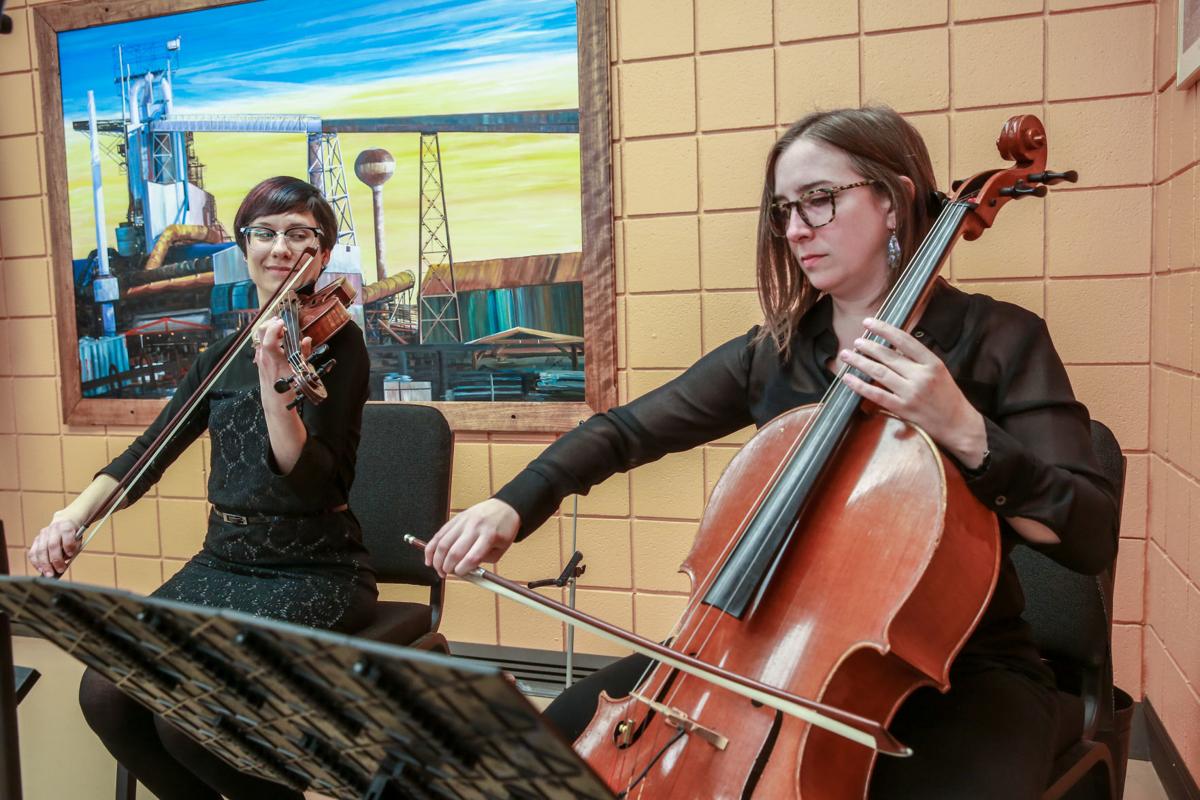 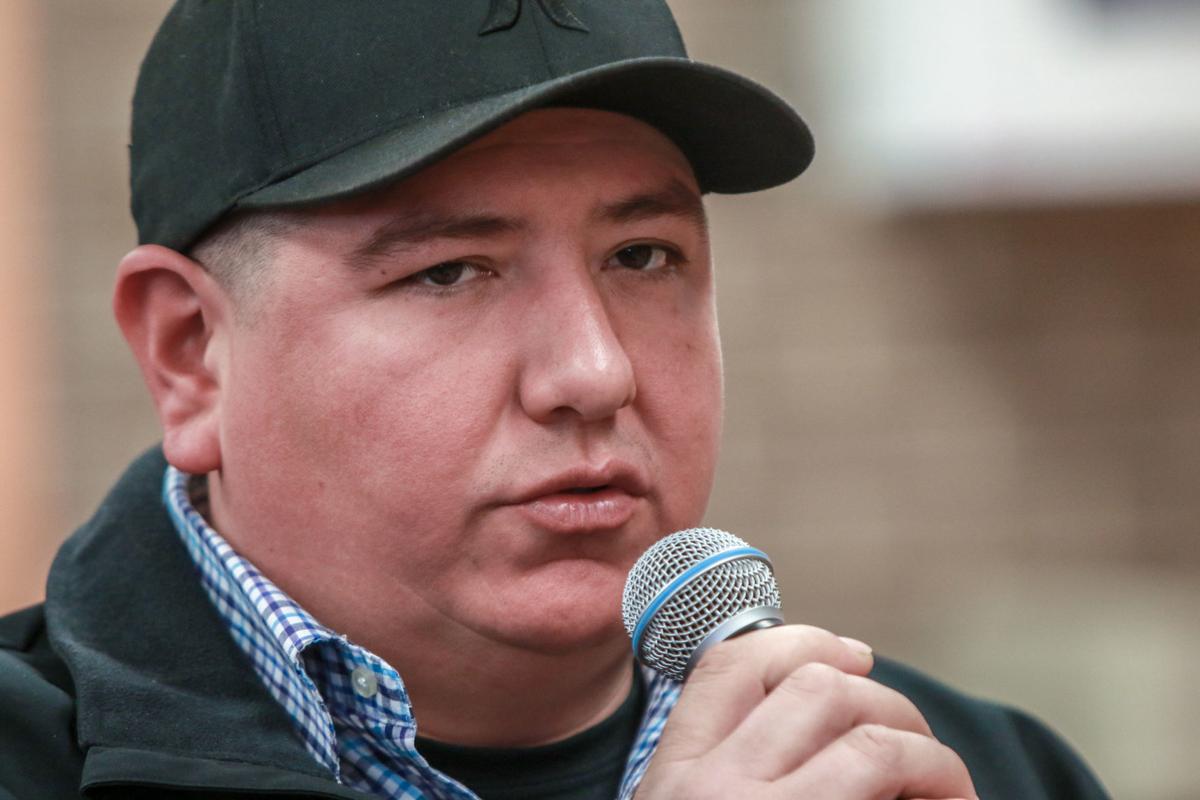 Mark Bernal teared up before he went to lay a single rose on a ceremonial pile of wreaths to honor his late brother Joseph Bernal, who died in a steel mill accident in the 1980s.

"I tried not to get all misty-eyed," he said. "But it's been 34 years, and the pain doesn't go away. The only thing I can say is be vigilant and make sure your coworkers go home. It's the best thing you can do, to be vigilant."

Mournful family members laid roses atop the wreaths while a string duet played an instrumental version of Leonard Cohen's "Hallelujah" at the United Steelworkers Local 1010 Workers' Memorial Day ceremony in Hammond's Hessville neighborhood Thursday. The union released 391 balloons, one to commemorate every steelworker who has died at ArcelorMittal Indiana Harbor, including Willie Batteast and Alfredo Cadena, who were killed in accidents last year.

"We're here to honor 391 fallen sisters and brothers," USW 1010 President-Elect Steve Wagner said. "Nothing is more important than brothers and sisters continuing to work in a safe workplace. We all need to ensure the workplace is as safe as possible. If a job isn't safe, we don't do it."

Workers Memorial Day coincided with ArcelorMittal's 12th annual Health and Safety Day, in which the company carved out time for steelworkers to undergo safety training at its facilities in Northwest Indiana, New Carlisle and Riverdale. The steelmaker, one of Northwest Indiana's largest employers, said it has reduced its lost-time injury frequency rate to 0.78 incidents per million hours worked in 2017, down from 3.1 incidents per million hours worked in 2007.

The Luxembourg-based steelmaker, which has steelmaking and mining operations worldwide, has been focusing on preventing fatalities, such as through pre-shift safety meetings, shop floor audits, on-site pre-job risk analyses and better risk reporting.

“Working safely is a matter of choice — one we make every time we act, at every level in the company," ArcelorMittal Chairman and CEO Lakshmi Mittal said. "As such, it is imperative we choose the safest way in everything we do. Our data shows us that the operations which take risk reporting most seriously tend to be fatality-free. They are also half as likely to have accidents resulting in lost time, or restricted work injuries. The first step in all our planning should be to spot and mitigate risks before accidents happen."

In March 2017, Batteast became the first USW Local 1010 member to die on the job in seven years, the longest stretch without a fatality in the union chapter's history, when he succumbed to injuries he suffered in a crane accident. In December, Cadena died in a buggy accident at the No. 3 Continuous Annealing Line at AcelorMittal Indiana Harbor in East Chicago.

"We had two fatalities last year, and that's the ultimate failure," ArcelorMittal Indiana Harbor General Manager and Vice President Wendell Carter said. "We failed the deceased and their families. We had two of the 23 the company lost last year. Normally, we don't have any."

Three-way communication before boarding and deboarding a crane could have prevented Batteast's death, Carter said. Though there are several videos of the incident, it isn't clear what caused the accident that killed Cadena, which shows that safety plans don't recognize all the hazards, he said.

"We're working on ways for improvement," he said. "We're giving people stop work cards today, because safety is everybody's responsibility. A stop work card is a tool, but also a reminder that we're responsible for my safety and the safety of our fellow employees."

USW Local 1010 Safety Chairman Don Jones said that though health and safety progress has been made, fatalities don't need to happen at the steel mill. The union and steelmaker look at what happened during accidents or near misses and try to correct deficiencies to keep the same mishaps from happening again.

He urged constant vigilance on the job.

"Be aware of any changes in conditions and hazards they may create," he said. "Keep an eye on new hires and transfers. Make sure nothing happens to them. Make the job safe, or we don't do it."

Indiana Harbor Health and Safety Manager Bill Emery recalls starting his career in the caster and coming across a grizzled veteran — a big, husky guy — who wasn't wearing a hard hat. Emery asked if he had a hard hat. He asked "Who are you?" before going to retrieve the required safety equipment.

"Why does it matter who I am?" Emery said. "I'm trying to help you out. Did I save his life at the mill that day? Probably not. But it's better to have difficult conversations now than much harder conversations later on."

Janice Pinkins said it meant a lot that her late husband, Daniel Spencer, was not forgotten by his colleagues. He died in a hot strip mill accident in November of 2005.

"I worry my husband has been forgotten, but am happy he's still on your mind," he said. "This presentation lets me know he did not die in vain, that you are still working to improve safety on the job."

In a union election season that's ushered in some new leadership across Northwest Indiana, United Steelworkers Local 2003 has chosen to re-ele…

The European Commission cleared the way for ArcelorMittal to acquire Ilva, an integrated Italian steelmaker that's been in business since 1905.

Steel imports up 19 percent in April

Union retirees invited to sound off on contract talks

United Steelworkers retirees are invited to sound off on upcoming contract talks at a meeting in Hammond.

ArcelorMittal Indiana Harbor in East Chicago succeeded at a goal of shipping 1 million tons of slabs to AM/NS Calvert in Alabama last year, do…

A safe manufacturer plans to open a fulfillment and call center at a former book warehouse in Hammond, where it will hire 28 workers.

EAST CHICAGO — A steelworker was killed in a fatal train accident at the ArcelorMittal Indiana Harbor steel mill Tuesday morning, the first de…

Indiana has fined ArcelorMittal $14,000 after the death of a steelworker in a fatal train accident at the ArcelorMittal Indiana Harbor steel m…

ArcelorMittal steelworker Jason Reyes was on vacation in California last year, visiting his cousin in North Hollywood, when he suddenly got de…

In the early 20th century, Northwest Indiana became a hub of heavy industry, from Hammond's meat packing plants to the west, to Michigan City'…

A widow pressed her fingers against the name of her husband on a cold marble wall as bagpipe music wailed in a dirge for fallen steelworkers, …

HAMMOND | A teary widow recalled kissing her husband goodbye for the last time before he went to work at the mill.

'Not one ounce of steel is worth an injury'

HAMMOND | Steelworker Chris Cottrell was not feeling too well when he started to get a strange taste in his mouth a few years ago.

Following the Workers Safety Memorial ceremony Thursday, balloons are released in honor of those who died in steel mill accidents.

Bill Emery, left, and fellow steelworkers pause for a prayer at the Steel Workers Safety Memorial.

At the Workers Safety Memorial ceremony Millie Rytel talks about her late husband, Stefan Rytel, who died in 1973.

Joe Gutierrez gives the invocation at the Workers Safety Memorial.

At the Workers Safety Memorial ceremony Janice Spenser talks about her late husband, Daniel Spenser, who died in 2005 .