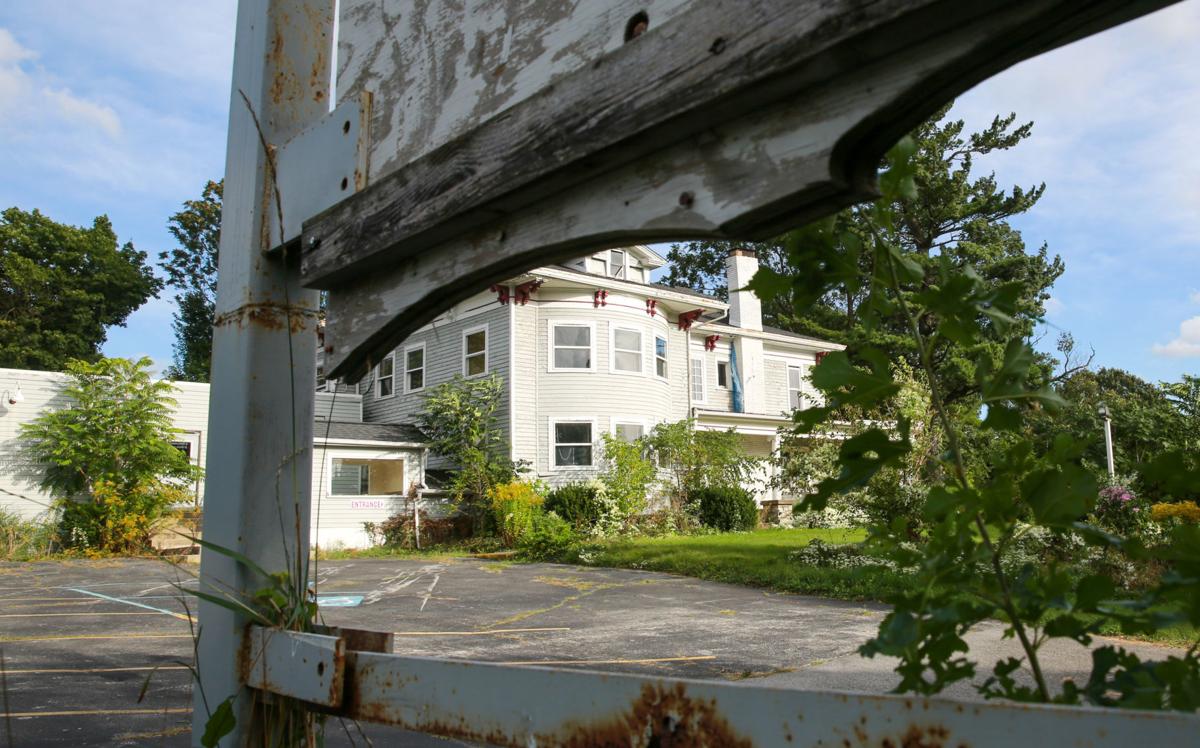 The former White House Restaurant in Valparaiso sits in disrepair. Developers intend to build housing on the site that city officials hope will contribute to the vibrancy of the city's downtown. 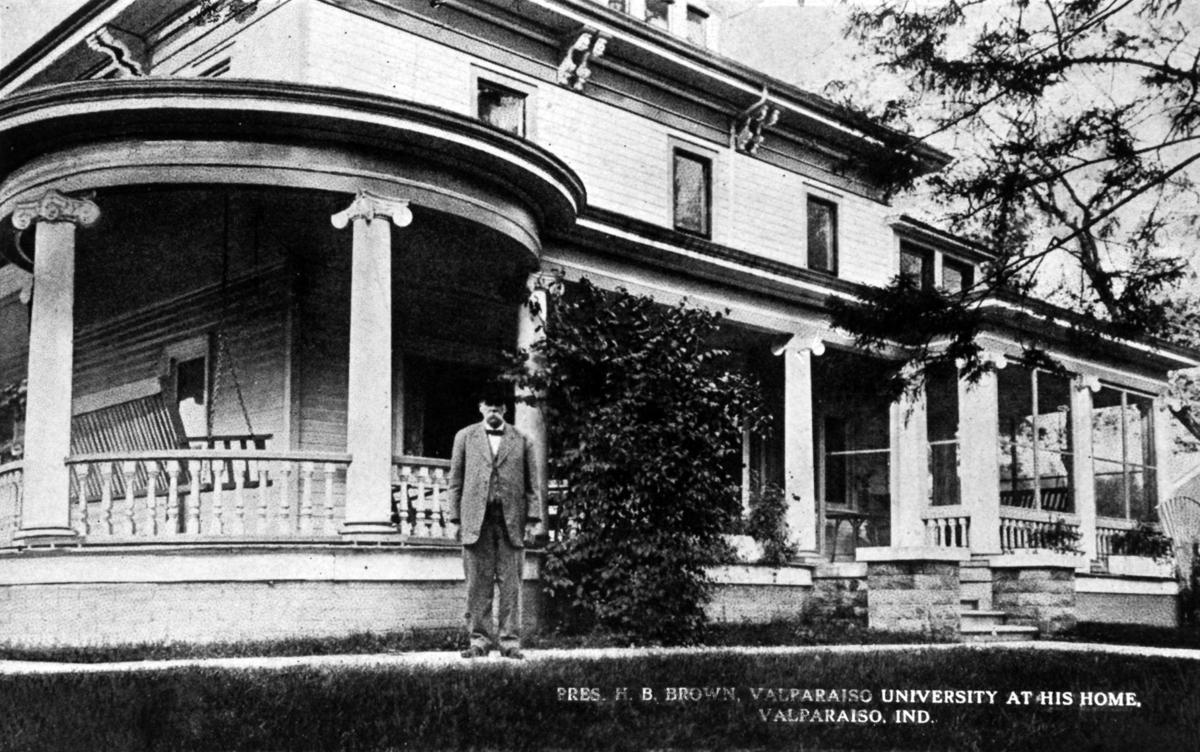 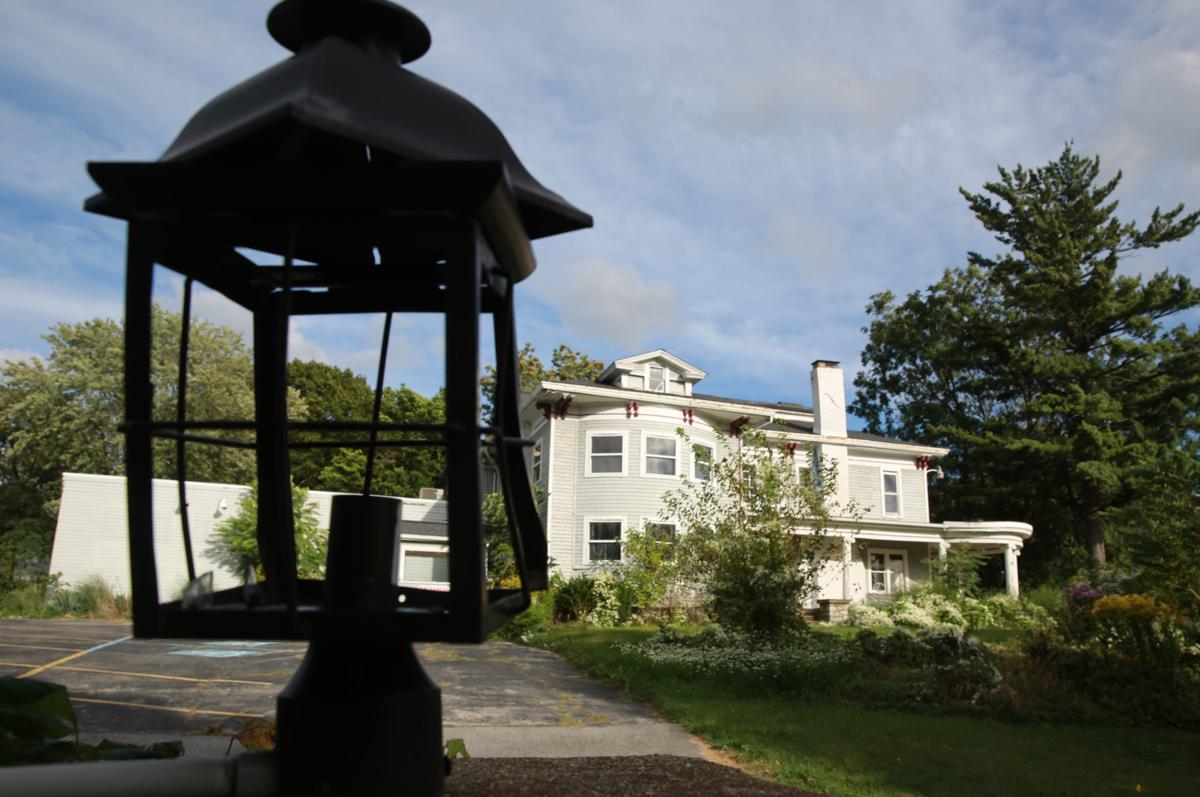 A bent lamppost sits outside of the former White House Restaurant in Valparaiso. 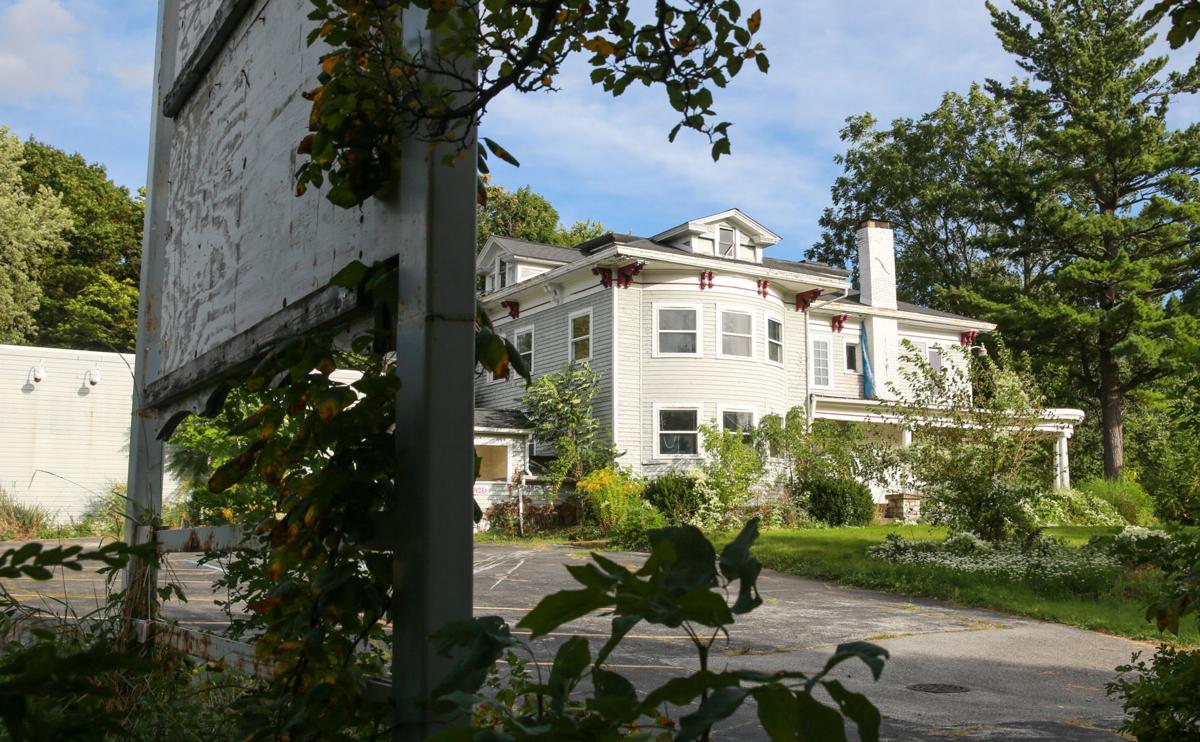 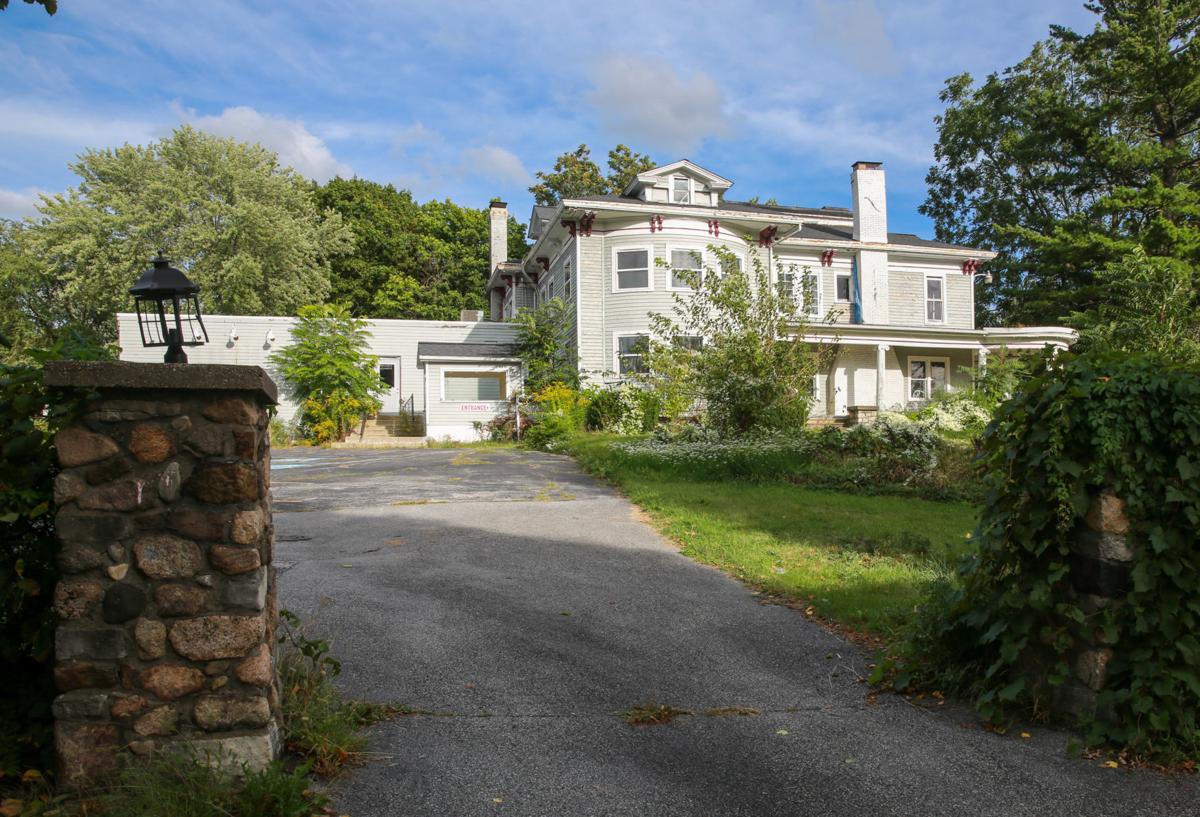 For decades, Region residents dined in elegance on dishes like prime rib, roast lamb, quail and shrimp-stuffed trout under the chandelier at the White House restaurant in Valparaiso's historic Brown home on Calkins' Hill.

The stately mansion at Morgan Boulevard and East Jefferson Street, dating back to the mid-19th century, is "in need of dire maintenance" and may soon meet the wrecking ball. Developers plan to tear down the Victorian-era home to build upscale duplexes with rooftop decks, optional private elevators and starting prices in the low $500,000s.

It's been one of the most prominent houses in Valparaiso for more than 150 years.

"It was a symbol of times past," Mayor Jon Costas said. "But now it's a symbol of times moving forward. While we appreciate our past, we can't always re-create it. The downtown was a very different place in the 1960s, the 1970s and the 1980s, and it doesn't fit anymore."

The majestic four-story home was built by early Valparaiso civic leader William Calkins, whose family manufactured washing machines, around 1860, but accounts vary. It's often described as the Calkins-Brown House, or simply the Brown Home, because it notably was owned by early Valparaiso University President Henry Baker Brown, who in 1873 revived the defunct Valparaiso Male and Female College as the Northern Indiana Normal School or "the Poor Man's Harvard" that was later to become Valparaiso University.

According to the Valparaiso University Archives & Special Collections, it was one of the houses owned by Brown, who purchased the Methodist college that went defunct just after the Civil War in 1871. He bought the house on Calkins' Hill for $4,000 in 1880, which would be more than $1.04 million on the housing market in today's dollars. Brown reportedly entertained a number of prominent guests there including President William Howard Taft, presidential candidate and Scopes Monkey Trial attorney William Jennings Bryan and Irish President Eamon DeValera.

The building was so grand it was featured on a postcard around 1910, according to the Porter County GenWeb project.

The Pappas family purchased the large white frame house in 1942, residing in it for many years before turning it into a fine dining restaurant in 1978, according to the Vidette-Messenger archives. It offered lunch buffets, fixed-prices dinners and a popular Sunday brunch where a formal dress code was enforced.

Tuesday was Greek night, where diners could enjoy lemon rice soup, shish kebabs and Grecian chicken cooked with lemon and oregano. They ate fine food in an opulent setting that included "spacious rooms, fine woodwork and high ceilings," according to the Vidette-Messenger.

But business dwindled by the 1990s. On some nights, as few as six customers ate in the dining room. The eatery closed in 1995.

The Calkins' Hill Restaurant opened in the house in 2002, serving a "variety of the most popular ethnic dishes, from Creole cuisine to Moroccan, Spanish, French, Far Eastern and some Greek items in addition to steaks, pasta, seafood, salads and sandwiches," according to The Times of Northwest Indiana archives.

"There is a romanticism involved with the place, with its history," owner Socrates Petronicolos, a Greek immigrant who owned other places across Northwest Indiana and the south suburbs, told The Times. "It is a historic site."

But Calkins' Hill lasted less than a year.

Most recently, Sisters Bridal operated a bridal shop and reception hall at the property in the mid-2000s, but it's long been vacant, Costas said.

"Our family knew the Pappases as long as I can remember," he said. "We lived in Gary in the 1960s, and our families were friends. I remember exploring that huge house as a kid, exploring the property with my brother, walking out on the roof of the building and going to the fish pond in the back that had koi."

His family ran a produce business and would deliver grapes to the White House Restaurant, where they would make wine in the basement.

"It was a wonderful restaurant," Costas said. "There was excellent food. We would go for brunch on Sundays after church. It was one of our favorite places in town and the food was always good. It was a stately and beautiful building, but time takes it toll. After decades of disuse, it's fallen into disrepair."

Too costly to repair

Northwest Indiana Landmarks Director Brad Miller said he planned to approach the city about trying to save the building and perhaps developing new housing around it instead.

"It's a pretty significant building from the articles I read," he said. "It has a connection to Valparaiso University, it's a large size and a grand house."

But he said he knew it has been a troubled property for the city that had been vacant for some time.

"One of the challenges we face is that when grand, important buildings sit vacant in a neighborhood for long enough, people come to see them as eyesores," Miller said. "A challenge is that peeling paint and deterioration add to that perception. Every community has their white elephant, and in this case it's actually a white house."

Many people have floated plans to revive the property, Costas said, such as by turning it into a bed and breakfast like the historic Valparaiso Inn that a couple single-handedly restored, but have determined it's too costly. Costas believes the building has structural issues that run far beyond minor cosmetic repairs.

"Lots of people looked at it. It's cool, a grand old building. But what happens is people have a vision for it, but when they put the pencil to it, see it would be economically unfeasible," Costas said. "Our first hope was to see it saved. It's a grand building with lots of history and you hate to walk away from it, but nothing ever seemed to make sense. Our second desire is that the property can be part of our current phase of bringing higher-density housing in and around downtown so there's a critical mass for shops, stores and restaurants. It's an opportunity for more housing."

The project is moving through the planning process as two candidates campaign to be Costas' successor.

The Democratic candidate for mayor, local businessman Bill Durnell, said in a post on his campaign's Facebook page that "years of neglect have, apparently, left no option other than to demolish this once beautiful piece of history,” but he questioned the need for upscale duplexes "when similar properties just a few blocks away on Morgan continue to sit empty.”

Durnell acknowledged the owners' right to redevelop the property, but said that if the developer seeks tax benefits or public assistance from the city, "I will oppose it vehemently."

"I have mixed emotions," said City Councilman Matt Murphy, R-3rd and the Republican mayoral candidate. "In reality, we lost the old White House years ago when it was no longer being maintained by, and fell into disrepair by, former owners. That’s a shame for sure."

But Murphy said he is optimistic to see people putting “a significant investment into our downtown.”

VALPARAISO — New premium homes are set to take over the land known as Calkins Hill in downtown Valparaiso next year.

VALPARAISO | The historic carriage house behind the old White House Restaurant in Valparaiso may be coming down.

Schoop's, the Region chain known for its big beefy smashed burgers with crispy edges, has been named the best fast food restaurant in Indiana …

In the immortal words of House of Pain, easily one of the all-time best Irish-American rap groups named after the H.G. Wells novel "The Island…

Miller's Captain's House gets go-ahead to start franchising, may land soon in Valpo

Captain's House in Miller has gotten the go-ahead from the state of Indiana to franchise its "contemporary southern seafood" concept.

PORTER — They needed 1,872 students to break the Guinness Book of World Records for the largest field trip in the world.

Acclaimed essayist Hanif Abdurraqib, the author of "They Can’t Kill Us Until They Kill Us," will appear at Indiana University Northwest in Gar…

When Greg Stephan first burned a grilled cheese sandwich, it was a revelation.

Gary's lakefront Miller neighborhood has a new live music venue that will soon make its debut.

The state of Indiana wants to hear from small-business owners in Northwest Indiana, including minority-, women- and veteran-owned firms, for a…

Northwest Indiana ranked seventh nationwide in house price appreciation over the past year.

The stately Victoria-era mansion at Morgan Boulevard and East Jefferson Street that was built by an early civic leader in the mid-19th century, owned by early Valparaiso University President Henry Baker Brown, and long home to the White House Restaurant is getting demolished.

NWI lost many architectural landmarks, including the remnants of the Memorial Auditorium in Gary, the Carriage House property in Merrillville and the White House Restaurant in Valparaiso.

Irish immigrants settled across Northwest Indiana, which once had a neighborhood known as Little Ireland

More than one-tenth of Indiana residents claim some Irish ancestry, according to the U.S. Census Bureau.

The former White House Restaurant in Valparaiso sits in disrepair. Developers intend to build housing on the site that city officials hope will contribute to the vibrancy of the city's downtown.

A bent lamppost sits outside of the former White House Restaurant in Valparaiso.