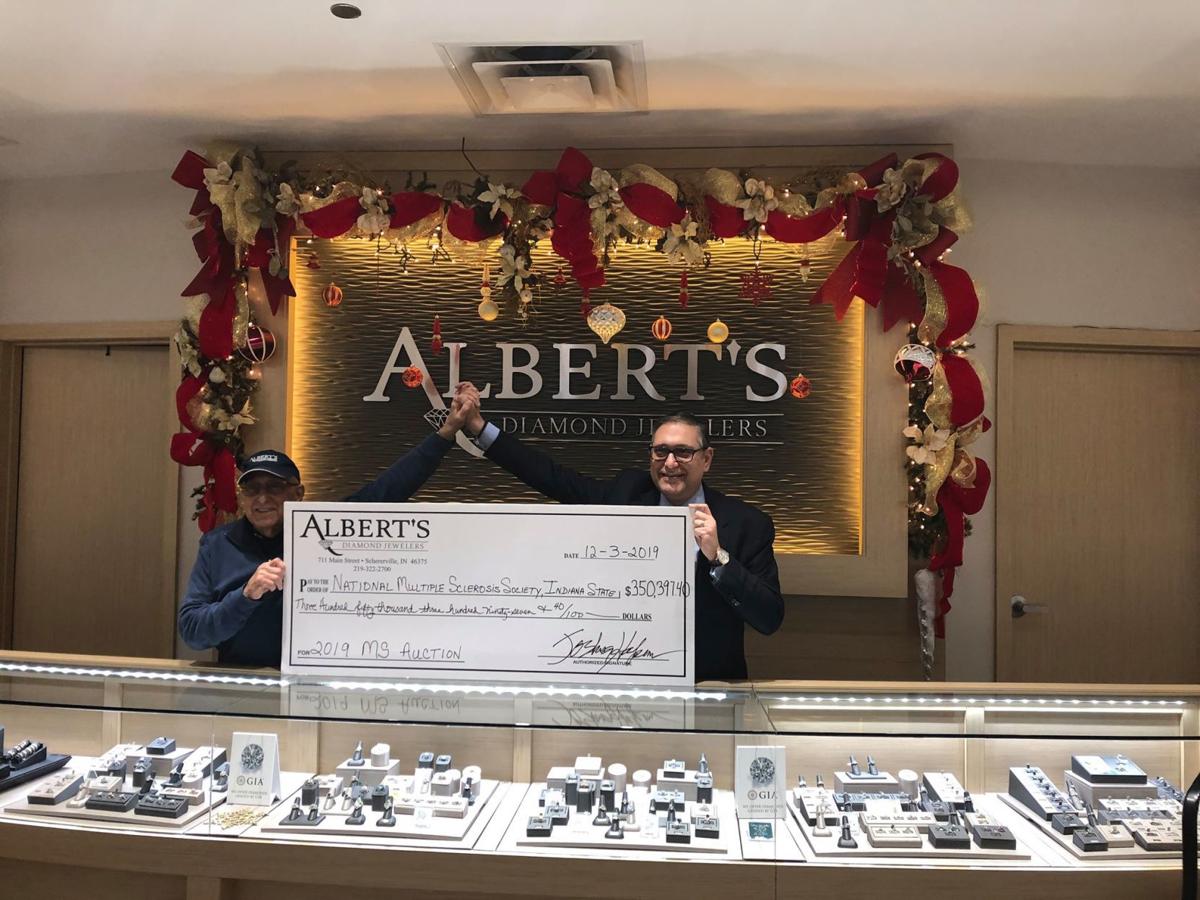 Albert's Diamond Jewelers owner Fred Halpern and President Josh Halpern pose with a giant novelty check for $350,397.40 that will fund MS research and navigator services. The Albert's MS Auction was the largest multiple sclerosis fundraiser in the country by a margin of nearly $200,000 this year. 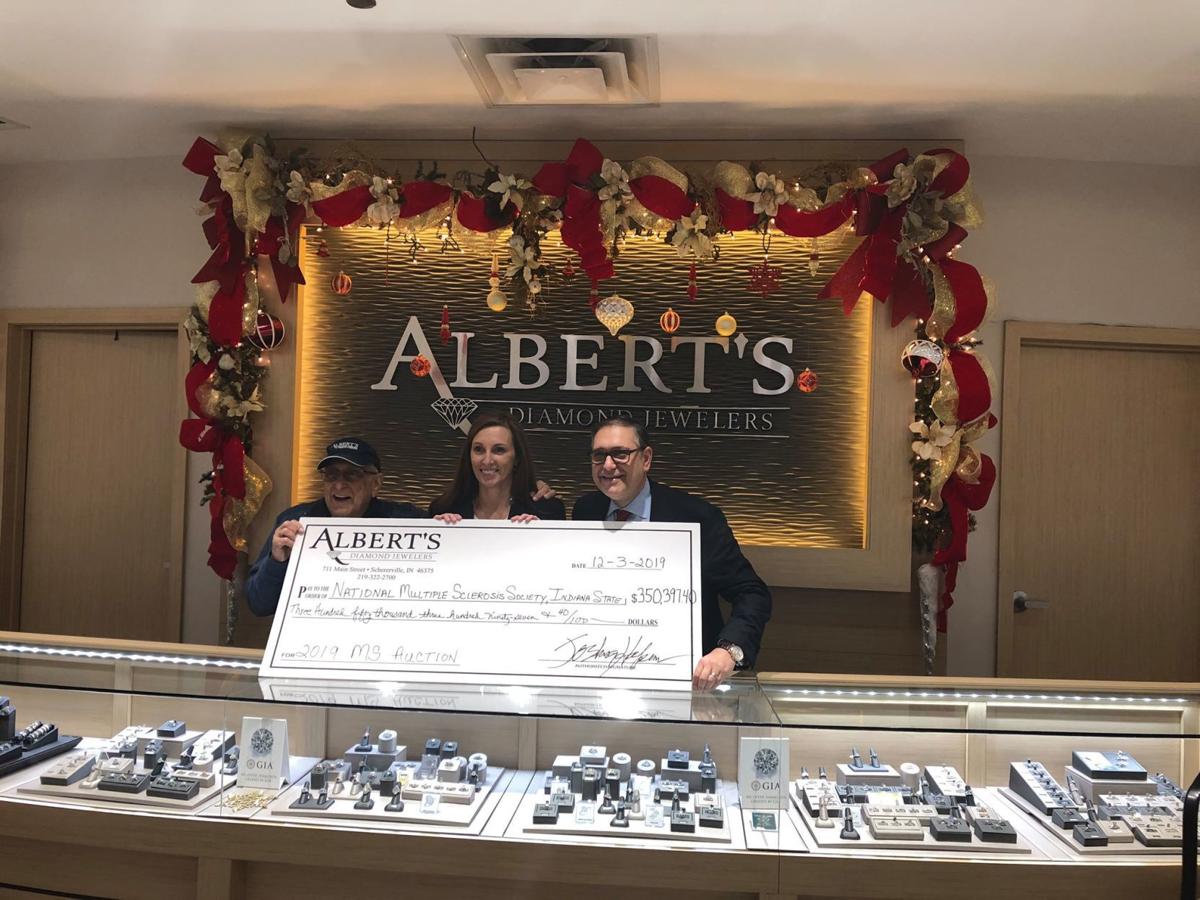 For the Halpern family, it's deeply personal.

Donna Halpern was not diagnosed with multiple sclerosis, a chronic disease that disrupts the central nervous system, until she went to see an optometrist about her blurry vision and the doctor sent her to a neurologist for testing decades ago.

"A lot of people don't even know they have it because the symptoms can be so mild," said Fred Halpern, her husband and the owner of Albert's Diamond Jewelers in Schererville and the Southlake Mall in Hobart. "People find out because they have vision issues, bladder issues, issues with their knees trying to walk up stairs, numbness, tingling in the hands and fingers. It can go undetected for years."

The Halpern family launched the Albert's MS Auction 16 years ago to help find a cure for Donna and it has since grown into the single biggest multiple sclerosis fundraiser in the country — by a wide margin. This year, the annual gala at the W.F. Wellman Exhibit Hall in the Indiana Welcome Center in Hammond — at which attendees placed bids on sports tickets, fine whiskeys, jewelry and even cars — raised $350,397.40 for the National Multiple Sclerosis Society. That's more than twice as much as the runner-up.

The money will go toward research toward a cure and to navigators who help people with MS in Northwest Indiana pay for expenses like medication, nurses, wheelchairs and wheelchair ramps.

Stafford said the nation's two largest MS fundraisers were both in Indiana this year. Albert's MS Auction in early October beat out the second-place fundraiser in Indianapolis, which included a concert by the band Smash Mouth of "All Star" fame, by nearly $200,000, she said.

"I think it means Indiana's pretty cool," she said. "It's fueling research and services from MS navigators. I was in awe of the experience at the Albert's MS Auction, with all the energy in the room."

Fred Halpern said all of Northwest Indiana and the Chicago south suburbs comes together to support the annual fundraiser. The gala is spearheaded by Albert's employees Amanda Worley and Nicole Diaz and a steering committee of many local business leaders that includes Lee Enterprises Vice President and Group Publisher Chris White and Vice President – Local Advertising Joe Battistoni with The Times of Northwest Indiana.

"Everyone in Northwest Indiana and the south suburbs is responsible for this event," Fred Halpern said. "We get support from Strack & Van Til, car dealers and many local restaurants like Gino's, Theo's, Ciao Bella and Asparagus. The people who frequent those places all contributed. All these people have turned out or volunteered and donated their time or treasure to help this cause. And it all goes to charity, none of it to administration fees. We take pride in it."

Albert's Diamond Jewelers President Josh Halpern said the annual auction has now raised more than $2.5 million for MS research and services over the past 16 years. He hopes to pass the $3 million mark as soon as last year.

"Something that's significant is that in the national fundraiser circle of distinction the other names surrounding Albert's are Pepsi, Boeing, Delta, all these Fortune 500 companies," he said.

He hopes to raise the profile of the annual auction even further by bringing in a big name with MS — possibly an athlete, actor or musician — to keynote the event. Halpern also is searching for a big title sponsor to underwrite it, potentially a hospital or pharmaceutical company.

"I think it's amazing that it's now No. 1," Josh Halpern said. "The people in Northwest Indiana can be proud that it's the No. 1 MS charity in the country."

Albert’s Diamond Jewelers raised about $18,000 auctioning off jewelry in its store at Indianapolis Boulevard and Main Street during its first …

When Albert’s Diamond Jewelers had its first fundraiser for multiple sclerosis research 14 years ago, it was held in the jewelry store at Main…

After a number of calls inquiring about available event space, the South Shore Convention and Visitors Authority is shifting the focus of the …

SCHERERVILLE|The owners of Albert's Diamond Jewelers are receiving national accolades for their battle against multiple sclerosis.

United Airlines will replace some of its older Boeing planes with 50 new Airbus jets starting in 2024.

Townshend regrets not staying to mourn after Who stampede

Forty years after a stampede left 11 people dead and 23 injured at a Who concert in Cincinnati, Pete Townshend says he’s always regretted not sticking around to deal with the aftermath.

The previous owner of Monroe Pest Control in Hobart was honored for excellence in his field.

Mr. Funnyman will headline Pet Rock, an annual fundraiser for the Humane Society of Northwest Indiana.

The Indiana Welcome Center is closing for a deep clean to fight the spread of the global coronavirus pandemic.

Lake County Sheriff Oscar Martinez said the fight was not related to any ongoing protests across the Region, and it was not yet know if any arrests were made.

Albert's Diamond Jewelers owner Fred Halpern and President Josh Halpern pose with a giant novelty check for $350,397.40 that will fund MS research and navigator services. The Albert's MS Auction was the largest multiple sclerosis fundraiser in the country by a margin of nearly $200,000 this year.