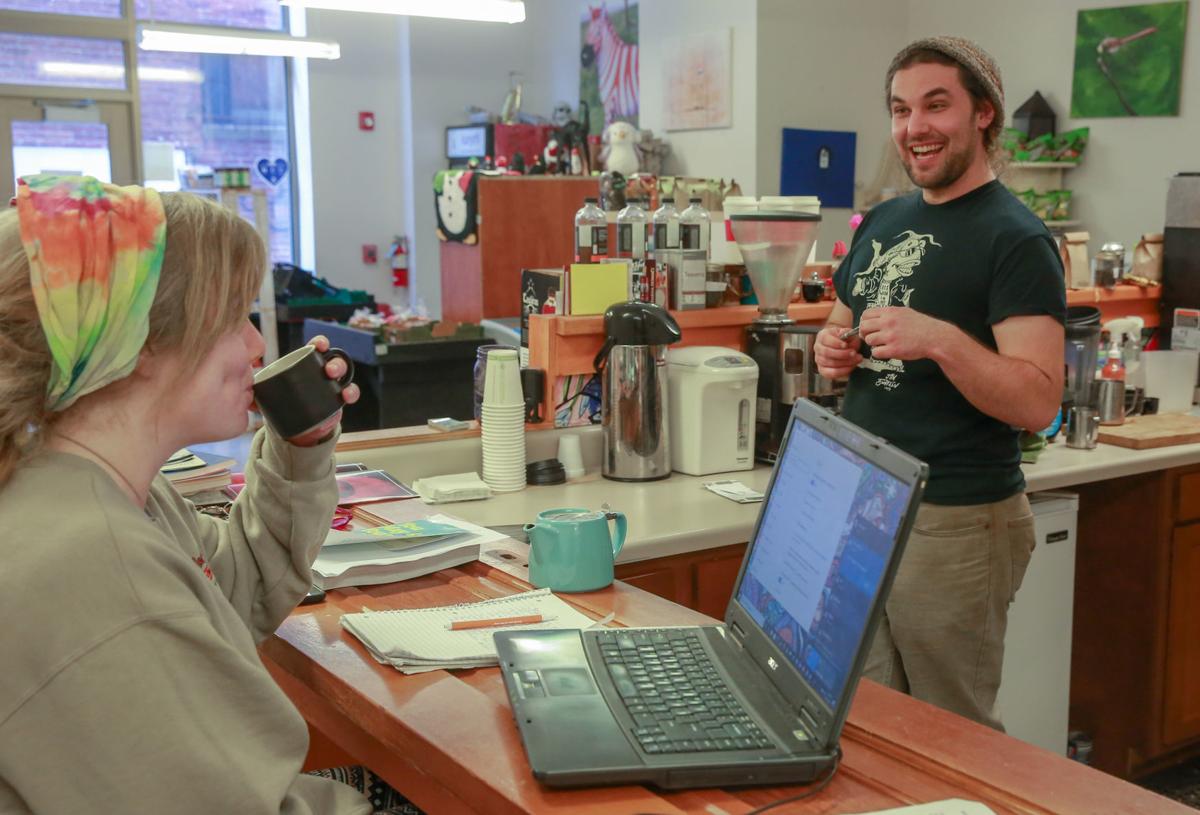 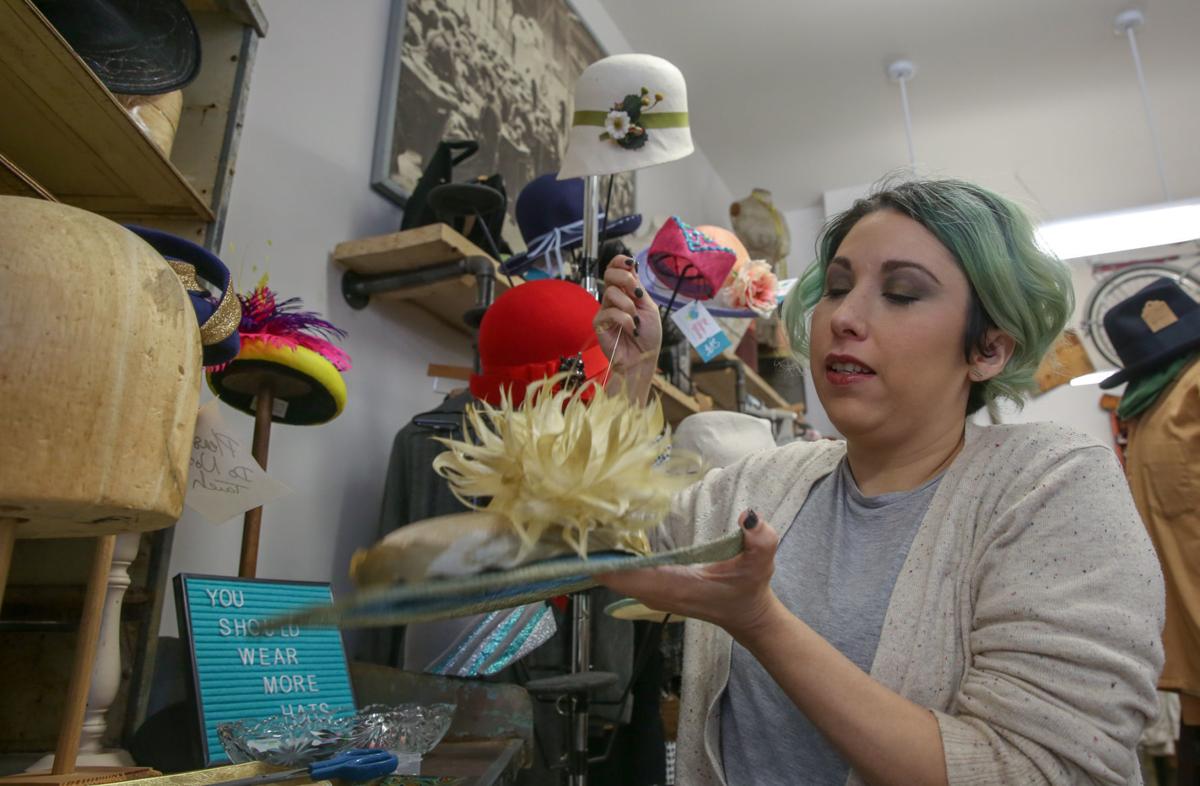 Amanda Joyner works on a hat at her business, Chef Bizzaro Millinery. 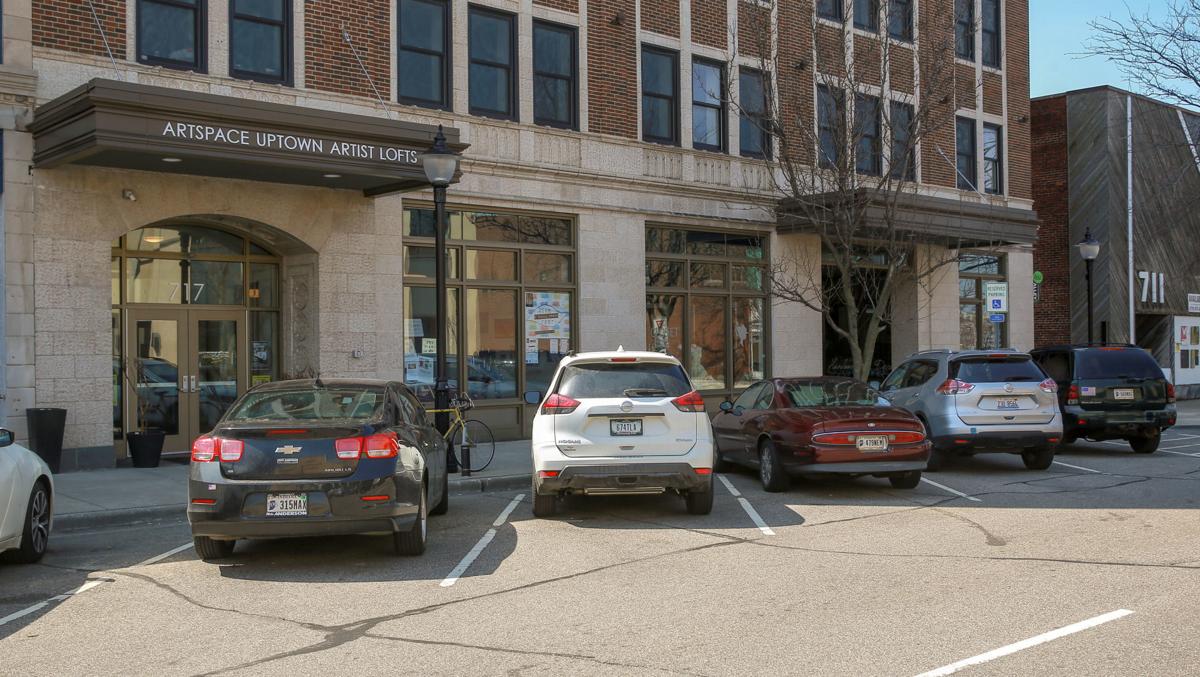 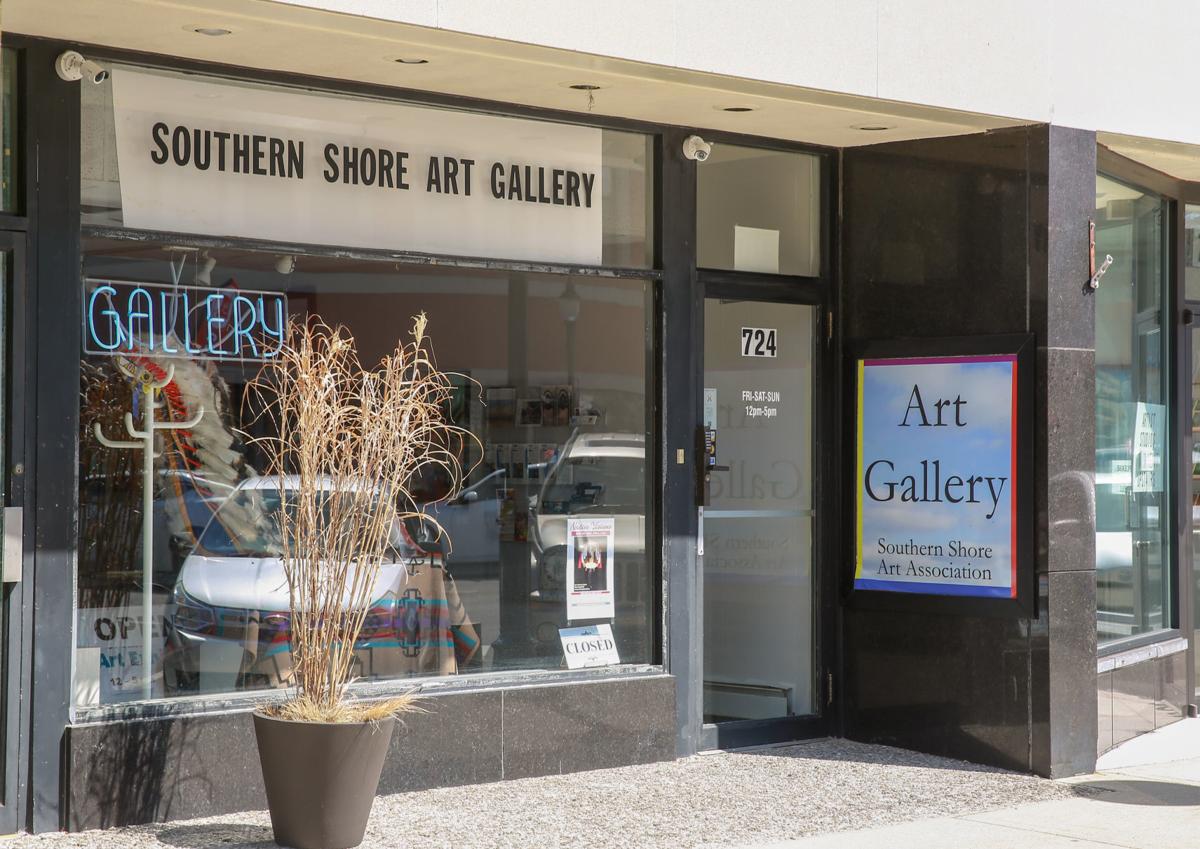 The Southern Shore Art Gallery is located on Franklin Street across from Artspace in Michigan City.

The pattern has played out time and time again in cities across the country: Artists start moving into a distressed, rundown neighborhood, open studios and galleries and soon it’s transformed by an influx of investment and new residents.

Artists have revived many neighborhoods like Wicker Park in Chicago, the Miller section of Gary, the Historic Third Ward in Milwaukee, Fountain Square in Indianapolis and Midtown in Detroit.

Michigan City community leaders long have banked on the arts as a way to revitalize downtown, which has been rebranded as the Uptown Arts District for the last eight years after long ago losing its position as the shopping center to the suburban sprawl, strip malls and hulking big boxes farther south on Franklin Street. They have organized Friday night gallery walks, commissioned public sculptures, staged a winter craft beer festival and installed decorative lights and benches.

The strategy hit a major milestone in 2016 when the Artspace Uptown Artist Lofts revived the historic six-story Warren Building at 717 Franklin St. All 44 units for working artists sold out quickly, and five new retailers have opened on the first floor of a downtown that still suffers from a few vacant storefronts.

Downtown Michigan City has gained the type of crafty, chic boutiques one might find in a hip Chicago neighborhood, including organic grocer and art cafe Quality Beet; the bespoke hat maker Chef Bizzaro Millinery; Nest No. 4 Unique Home Decor; the Quilters Apothecary textile arts gallery, learning center and quilters' supply shop; and The Closet by Franklin Vintage, which bills itself as “an eclectic mix of vintage apparel, jewelry, art and antiques and other handpicked obsessions.”

The new shops, residents and cultural programs at the long-planned Artspace gallery space have injected a new vitality and energy downtown. The addition of the artists lofts has coincided with the addition of many new restaurants downtown in recent years, including Royale with Cheese, Muchos Mas, Bartlett’s Fish Camp, Fiddlehead, the Polish Peasant and Hokkaido Japanese and Sushi Restaurant.

Michigan City Mayor Ron Meer said several more downtown housing units are under construction and additional residential units downtown are planned near Ryan’s Irish Pub a few blocks north and along the South Shore Line tracks a few blocks south. Apartment or condo buildings as tall as five or 10 stories could be built along the commuter rail line in a few years. The city also is looking to revive the defunct farmers market held Saturdays from May to October at Washington and Eighth streets and install a new plaza that would include a stage for live concerts, and potentially a splash pad, fire pits, ice skating rink and space for physical fitness activities.

“One of the biggest impacts is that we have a new population of young people to middle-aged people in our downtown,” Meer said. “They’ve been supportive of many downtown businesses, including the fine restaurants in the area. There’s now a CVS across the street in an old building. Our goal is to have more interest and more investment in a thriving downtown.”

Arts exhibits, poetry readings, literary festivals and other cultural events at Artspace have helped bring downtown back to the point where some people are complaining there’s not enough parking, an issue the city has been looking into addressing, Meer said.

“Downtown had been dead and vacant,” he said. “It’s still going through growing pains, but tourists and visitors keep coming back. ... It’s contagious — you’re starting to see more pride in the downtown area.”

Poet, publisher and Artspace resident Michele McDannold said the artist lofts building is home to many self-employed artists, local business members and volunteers, as well as people who work in education, nursing and social services.

“Most of the resident artists at Artspace are involved in the arts and the broader community, oftentimes in wildly different ways. This space allows those experiences and pursuits to intersect,” McDannold said. “There is a spirit of generosity and inclusiveness throughout the building in general, which also informs much of the event and exhibition planning. I am spending my dollars in neighboring businesses at least every week, often every day. It is not unusual to go to a place and see another, if not many, Artspace residents while I’m there. Local is really important to most of us, even though many of us are not from here originally.”

Chef Bizzaro Millinery owner Amanda Joyner lived in Michigan City for years before opening her hat-making shop in a shared storefront with friend Julia Nielsen, vintage enthusiast and owner of The Closet by Franklin Vintage.

Joyner, a longtime hat enthusiast who initially took up the craft to make a hat she fancied that was just out of her family's price range, ran her business largely online at first, selling fascinators, flight caps, pillboxes, cocktail hats and fedoras on Etsy and at local arts and crafts markets. She found clients worldwide, such as in South Korea, the Netherlands, Japan and the United Kingdom, where fancy hats for formal occasions like weddings never went out of vogue.

Her business proved so successful she decided to open the brick-and-mortar store in Artspace, which doubles as a studio and classroom for hat-making workshops for the public.

"I think it's great for Michigan City," she said. "I've been coming to the First Fridays and events downtown for quite a few years, and with Artspace there's so much going on. There's a lot to see and learn. It's not just the investment, it's having the artists and crafters in one place where they can meet up and promote their work."

Chef Bizzaro Millinery still does a lot of business online, including taking orders for the Kentucky Derby and royal wedding, but has developed a faithful clientele at her physical store at Artspace. Many first encountered her hats while browsing the neighboring vintage clothing and home decor stores.

The shop owners at Artspace have developed a close kinship, often grabbing coffee or smoothies together at Quality Beet or watching each other's stores if they need to run out for a minute.

"We loved the concept of an affordable artistic community, and thought it was a great opportunity," Joyner said. "We want to see it grow."

The Closet by Franklin Vintage

What: Home goods and decor store

Climate change author to give talk in Michigan City

Professor, author, investigative journalist Christian Parenti will visit Michigan City to discuss the perils of climate change and his forthco…

LaPORTE — Contracts have been approved for renovation and expansion of the historic courthouse in Michigan City.

A local artist has opened a new gallery in a Merrillville strip mall just south of the border with Gary's Glen Park neighborhood.

It’s long been a seller’s market in Northwest Indiana, but it’s actually the hardest it’s been to buy a house in years.

Munster-based Peoples Bank is working toward a third-quarter closing on its acquisition of First Personal Bank, which will give it a foothold …

The Gary metropolitan area grew by a total of 153 residents last year, a negligible amount for a metro with a population over 700,000.

Region residents will soon be able to pour one out for the late rock and roll legend Ian "Lemmy" Kilmister with Motörhead's own official beer.

Starting this Sunday, commuters and day trippers will pay more to take the South Shore Line train into Chicago to fund a new safety system aim…

Painter and Michigan City Art League member Paul Ortega will teach a class for kids and adults on how to "Create a Galaxy with Watercolor."

When shopping for gifts this holiday season, there's an alternative to the mobs at the malls and big-box stores.

Artspace Uptown Artist Lofts in downtown Michigan City will open its first gallery exhibit of the year on Friday, shining the spotlight on the…

More than 33 million Americans have some Irish ancestry, and two Region businesses give them a way to connect with their roots.

Two craft beverage-makers have joined forces in Gary's Miller neighborhood as a kombucha-maker looks to grow the business.

While it may not have something as flashy as the Lincoln Memorial or Gateway Arch, the Region has some historical spots worth sightseeing.

If you’re planning an afternoon of shopping, there are plenty of quaint shopping communities right here in our own backyard.

Amanda Joyner works on a hat at her business, Chef Bizzaro Millinery. 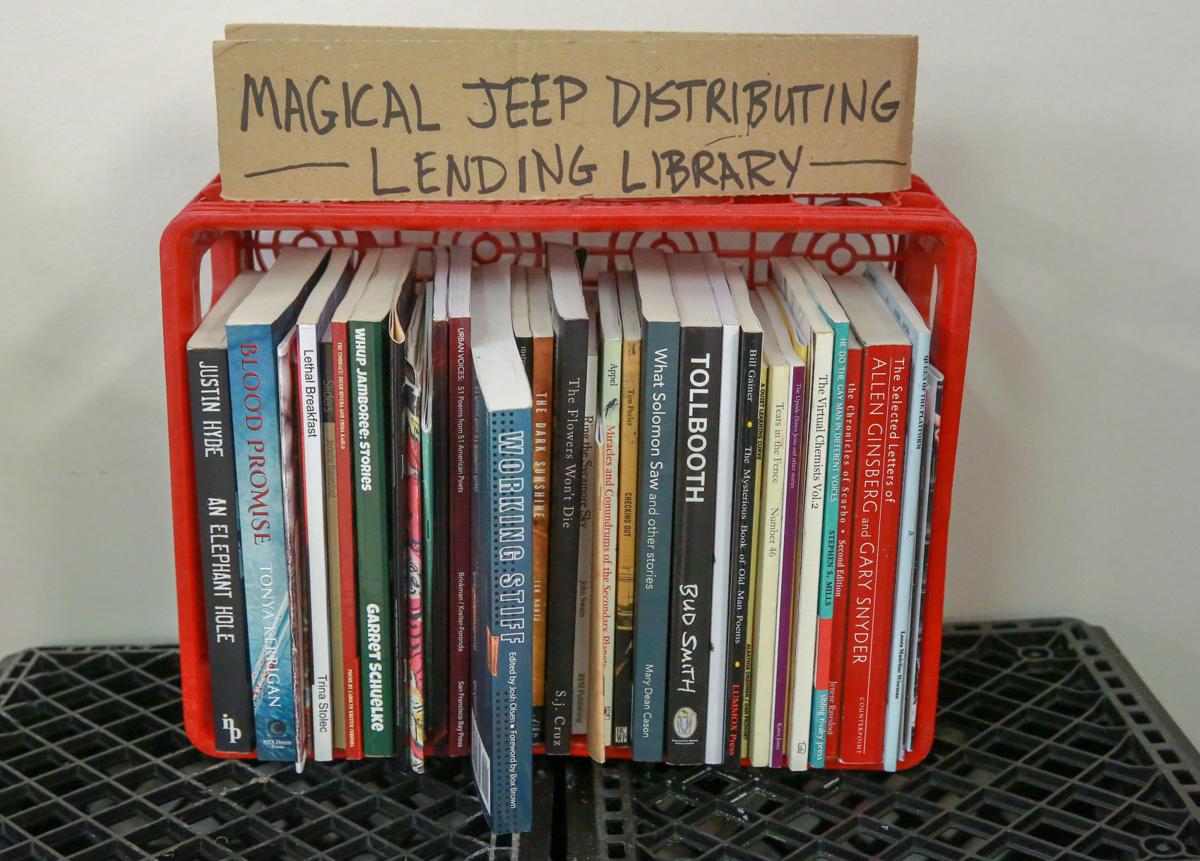 Quality Beet is a coffee shop and grocery store in the Artspace building in Michigan City. It even has a small lending library.

The Southern Shore Art Gallery is located on Franklin Street across from Artspace in Michigan City.