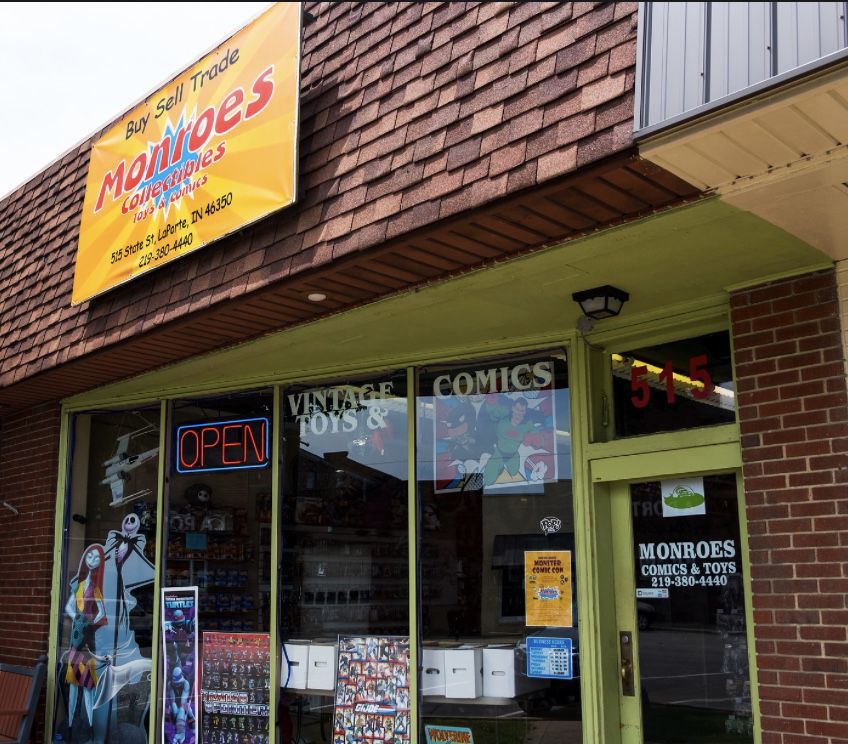 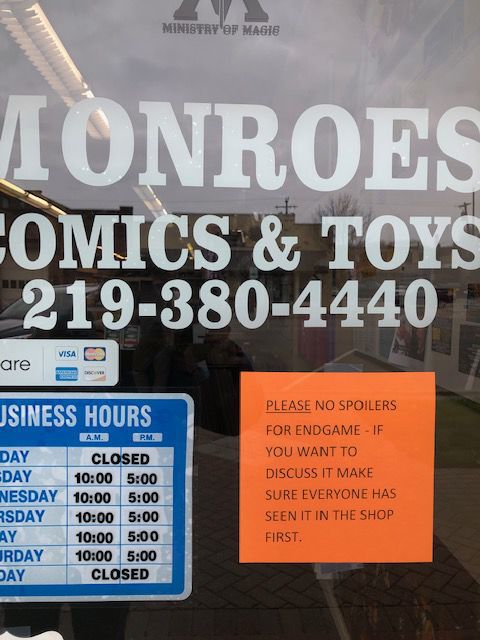 Monroes Collectibles Toys & Comics owner Juli Trapp posted a sign on the door of her shop in LaPorte warning customers not to spoil "Avengers: Endgame," the Marvel Cinematic Universe film that broke a U.S. box office record with $60 million in revenue Thursday, and which Hollywood Reporter reported was on course for "a record-shattering global launch of $950 million, if not $1 billion."

"If you want to discuss it, make sure everyone in the shop has seen it first," her typed announcement reads.

People flock to Region comic book shops after big movies come out to discuss what happened in the films and what's next. Several comic book shop owners in Northwest Indiana said they see a boost in business from movies and television shows. More people are seeking the original source material, related back issues, action figures and Funko bobbleheads, they said.

And the movies also attract a younger generation of fans who ensure a future for the niche retail business.

Comic book movies have taken over Hollywood, generating fortunes Tony Stark and Bruce Wayne could only dream of. The Marvel Cinematic Universe is the highest grossing Hollywood franchise of all time, with more than $18.2 billion in revenue, nearly twice as much as second-place "Star Wars." The X-Men, DC Cinematic Universe and Sony "Spider-Man" movies also rank in the top 10.

The runaway popularity of comic book movies has been good for comic book sales. Last year, North American comic book sales totaled $516.59 million, an 18% increase over the $436.6 million made in 2008, when the movie "Iron Man" kick-started the Marvel Cinematic Universe, a series of interlocking films with shared characters and storylines. Industry tracking website Comichron reports comic book sales to comic shops in North America have risen 5.7% year-over-year to $79.7 million through the end of March.

James Rhone, the owner of Creative Comics in Griffith, said he will see a bump of as much as 5 percent to 10 percent in sales every time a big movie comes out, usually lasting for as long as the movie is in theaters.

"They want full series and graphic novels," he said. "The bump is a lot of younger fans who want to learn more about the comic books. The grocery stores no longer carry comics, so we're basically the only place people can find them anymore."

Rhone tries to turn them into regular customers, making recommendations about related titles or signing them up for email notifications when new books come out about a character they're interested in.

"The movies, cartoons and TV widen the horizon," he said. "It's nice to have more people come in, and we try to keep them on board."

Many people are interested in learning just how faithful or divergent the movies are to the original source material.

"I hadn't seen 'Batman v Superman' yet but knew what happened because so many people came in asking for 'The Death of Superman'," he said. "People want to see how the story was originally told. Right now, people want anything with the Infinity Stones storylines."

Corinne Roempagel, who co-owns Happy Day Comics in Hammond's Hessville neighborhood with her brother Walter Day, said people will come in the shop talking about the recent Shazam or Aquaman movies. She often buys comics to stock in the shop at conventions, thrift stores and elsewhere based on what movies are slated to come out.

"I remember when Batman came out there were lines outside the door for the midnight show," she said. "People are so clued into the TV shows and movies. I'll try to show them things from the history of the character like how there are so many different hulks: the Grey Hulk, the Green Hulk, Professor Hulk. There are so many stories through his storyline."

"There's very little correlation between the comics and the movies. The Falcon from the movies and the Hawkeye from the movies are very different than those characters in the comics. People will get angry we don't have anything with the Heath Ledger Joker, who doesn't appear in comic books."

But recent movies like "Enter the Spider Verse" and "Shazam" resonated with younger readers who seek out memorabilia with movie ties, like Funko figurines, Triemstra said.

Trapp said fans of the comic movies search for older issues about the characters they see on the silver screen and love coming in to talk about new releases.

"There have been heated arguments," she said. "One person might like the movie while the other doesn't, or they don't like how a character was handled."

All the enthusiasm over the high-grossing films is good for business.

"We usually see a good spike whenever a movie comes out," she said.

A national spotlight will shine this summer on the Lake County Sheriff's Department when it appears in a new live show, similar to "Cops," tha…

Thanos's snap may have wiped out half the universe at the end of "Avengers: Infinity War," but don't expect it to be any less crowded at NWI C…

A cartoonist who's been published in Time Magazine, USA Weekend and Bazooka Joe bubblegum trading cards is exhibiting his work at a gallery in…

3 Floyds' Zombie Dust ranked among best in the United States

Some of the best beer in the United States is brewed right in Northwest Indiana.

Northwest Indiana music legend Tom Lounges has amassed a massive record collection in his decades-long career of writing about, talking about,…

Quoth the raven, Green Door Books in downtown Hobart will host a dramatic reading of Edgar Allan Poe and a haunted house art show this weekend…