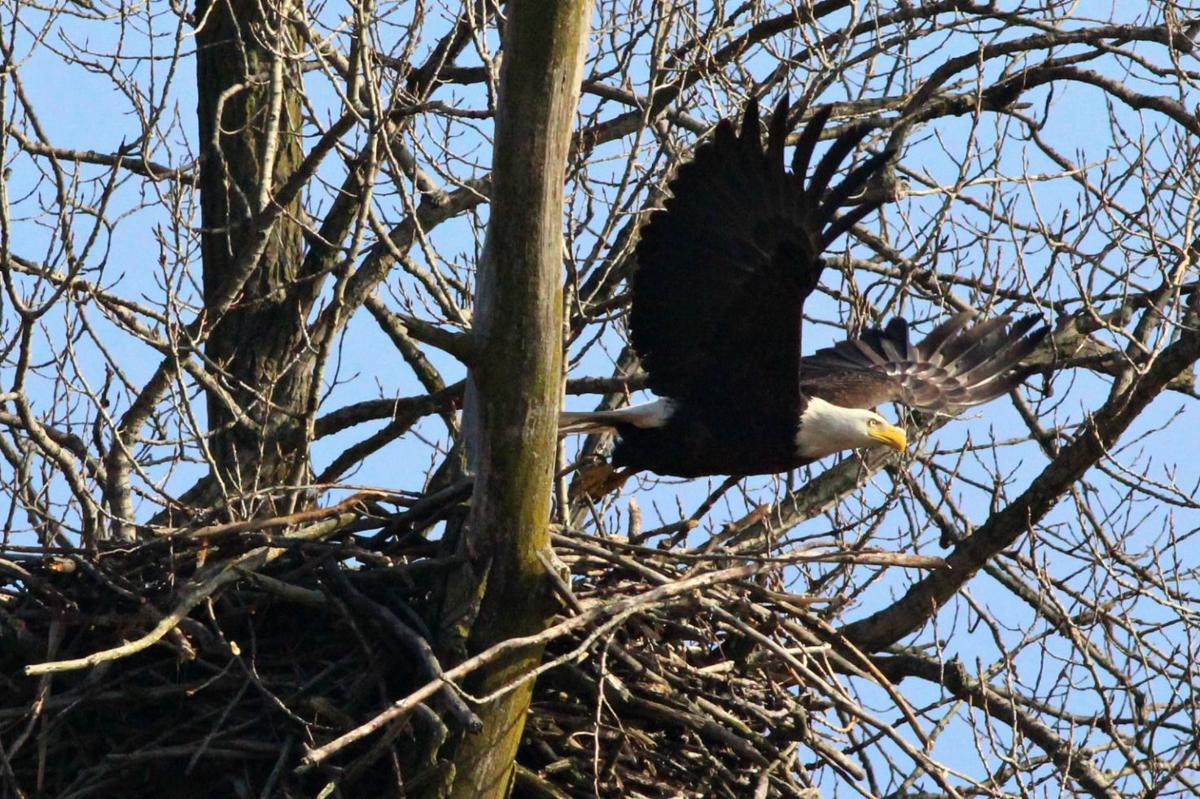 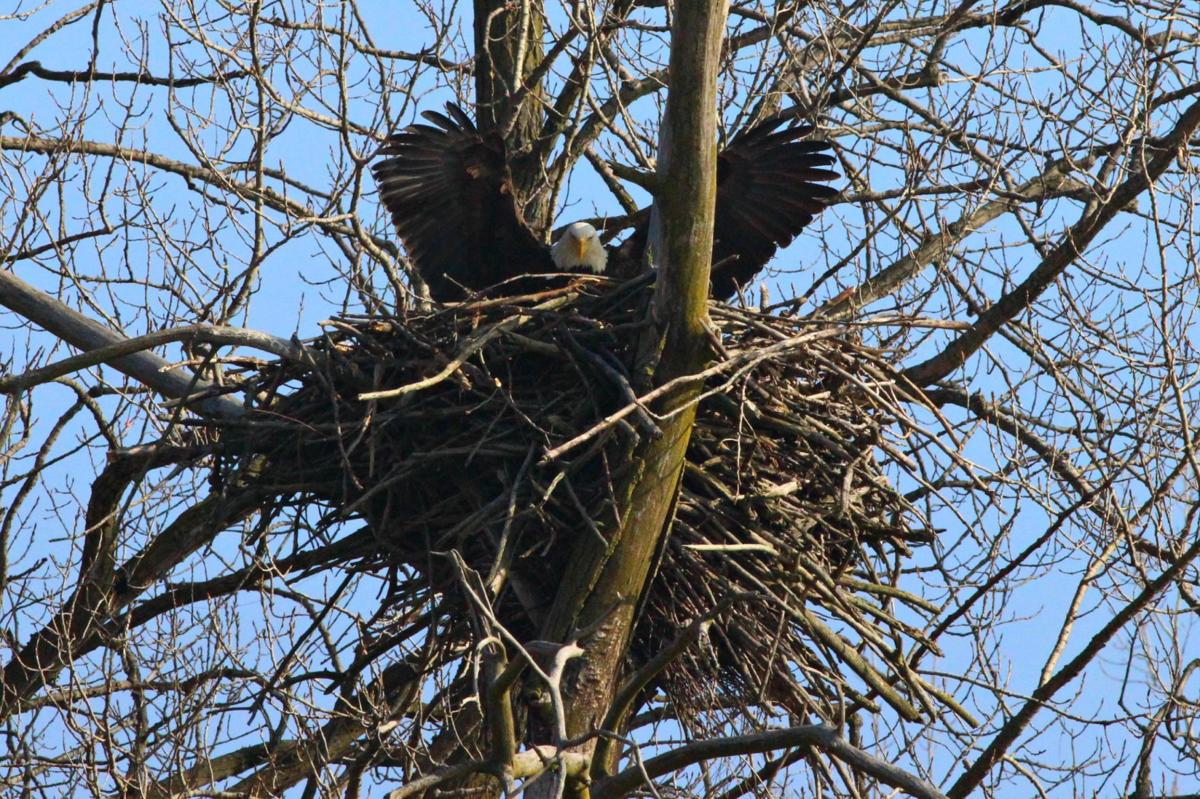 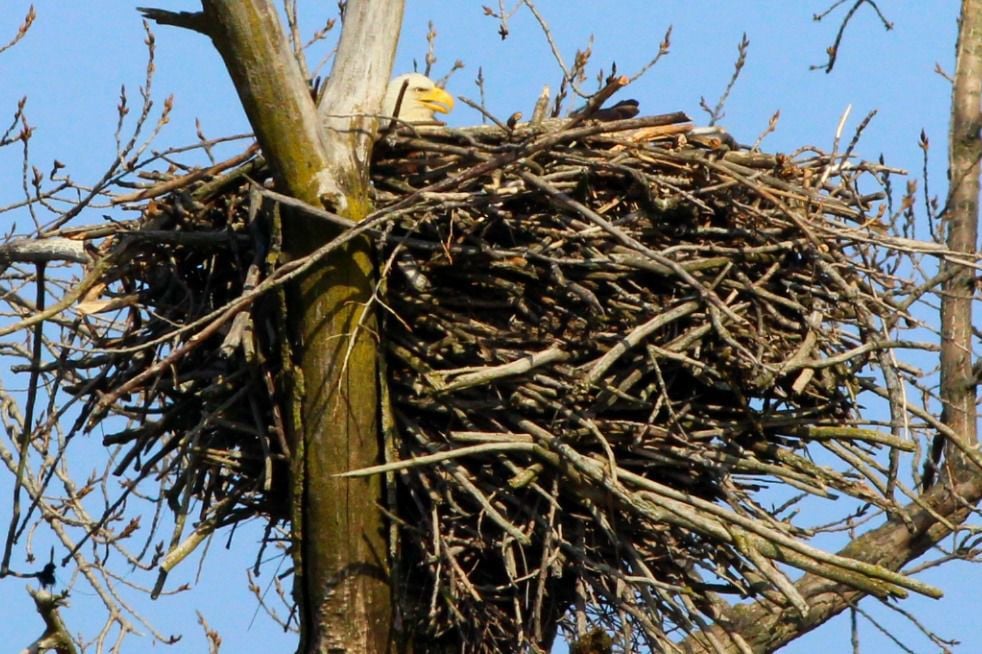 A pair of majestic bald eagles, the national emblem of the United States of America, have been nesting along the Little Calumet River in Gary's Black Oak neighborhood since at least 2011 and in the same nest since 2012.

"This year keeps getting better. It's just been a hell of a year," said Mike Lewandowski, a photographer who's been shooting the eagles in their natural habitat for eight years. "It was an old dead tree when they moved in and they kept adding new branches to the nest. It kept getting heavier and heavier."

Lewandowski, a boilermaker by trade, has documented the eagles fishing, raising eaglets, and scaring off hawks from their nest year after year in their tree in Black Oak, which is near a NIPSCO frontage property.

"They're such majestic creatures," he said. "This is the national bird. With all this coronavirus stuff, I just like to go to that great sanctuary and see my little loves. They take turns sitting on the eggs. This is so sad."

He's often caught shots of fuzzy eaglets fledgling — taking the first flight — in the summer and leaving the nest, often to establish territory of their own near the Kankakee River further south.

"The Little Calumet River was so polluted it's a testament to how much it's been cleaned up that the bald eagles are even here," Lewandowski said. "You still have people dump tires and couches and stuff out here. It's kind of crazy. I think of them as Region Rat eagles because they're not far from the Borman and they're used to seeing people around."

The eagles are likely to stay in the area, environmentalist and radio host "Conservation" Mike Echterling said.

Echterling, who's been watching the Black Oak bald eagles for years, said they only moved 100 yards away when they lost their first nest in 2011.

"We didn't find any casualties in the debris but it fell over three feet of water," he said. "That tree was long dead and it was only a matter of time. But they are likely to stick close by and rebuild."

The bald eagles cover a territory of about three or four miles in Black Oak. They have long been perched over a spot where the Little Calumet River is very flat and shallow and they can clearly see carp, salmon and steelheads.

"The fish are easy targets," he said. "They're also muskrats and other food sources nearby."

The bald eagles may even still have more eggs this spring if they can rebuild a nest or take over another nest soon enough, Echterling said. There's a great horned owl nest nearby that they might take over after eating the eggs or dropping them to the ground, he said.

"Nature has no feelings," he said. "Great horned owls are big birds but they're no match for bald eagles."

The Black Oak nest along the Little Cal was one of seven bald eagle nests in Lake County and 309 statewide, Indiana Department of Natural Resources Ornithologist Allisyn-Marie Gillet said.

"It’s been a very productive site, as it’s had chicks almost every year since 2011," she said. "This year, the nest was found with an adult sitting in the nest, likely incubating eggs."

Inclement weather like high winds, heat, rain and drought has all adversely affected nesting eagles but they are resilient, she said.

"They will likely re-nest, especially since they probably had eggs in the nest," she said. "Eagles typically will re-nest if they failed early on in their nesting cycle since they haven’t wasted too much time, effort, and resources. Eagles are particularly unique in that they sometimes build  secondary nests that act as 'backups' to their preferred nests, in cases like these where they lose nests and young."

She said it's possible the pair had a backup nest or will build a new one nearby.

"I’d keep my eyes peeled in case a new nest emerges," she said. "The new nest will likely appear near the one that was lost since it should be within the eagles’ territory. It’ll also likely be along the Little Calumet River since it’s a great source of food."

The Firefly Ball at the Michigan City lakefront Saturday will benefit the city's Washington Park Zoo.

Kayak or canoe down the Little Cal and see bald eagles

The Calumet Region gets its name from the Calumet River system, but the once heavily polluted rivers are often an afterthought in Northwest Indiana.

Michigan City launched a business recovery website to guide employers and their workers through uncertain times.

Sterno Products in LaPorte has switched to making masks, which it has been providing to local hospitals.

Coronavirus grounds Indiana Dunes Birding Festival, which has been rescheduled to 2021.

Steel production now down 2.7% for the year amid coronavirus crisis

State to review whether NIPSCO, utilities can charge customers to make up revenue lost during pandemic

The state will review a request from NIPSCO and other investor-owned gas and electric utilities to let them recoup revenue lost during the COVID-19 pandemic from customers.

Several businesses were shut down on the Torrence Avenue commercial strip in Calumet City and Lansing.

JC Penney, which already had filed for bankruptcy and announced it was shuttering 230 stores nationwide, said it would close its Calumet City department store at 200 River Oaks Drive. The troubled retailer is shuttering 154 stores this summer and plans to announce another wave of closures in the next few weeks.

"They may have tried to have babies again but I don't know if they were successful or not."

Mike Lewandowski, a boilermaker by day and an art photographer by night, has released a new book of his work.

You can view bald eagles at The Forest Preserve District of Will County’s upcoming "2021 Eagle Watch.”