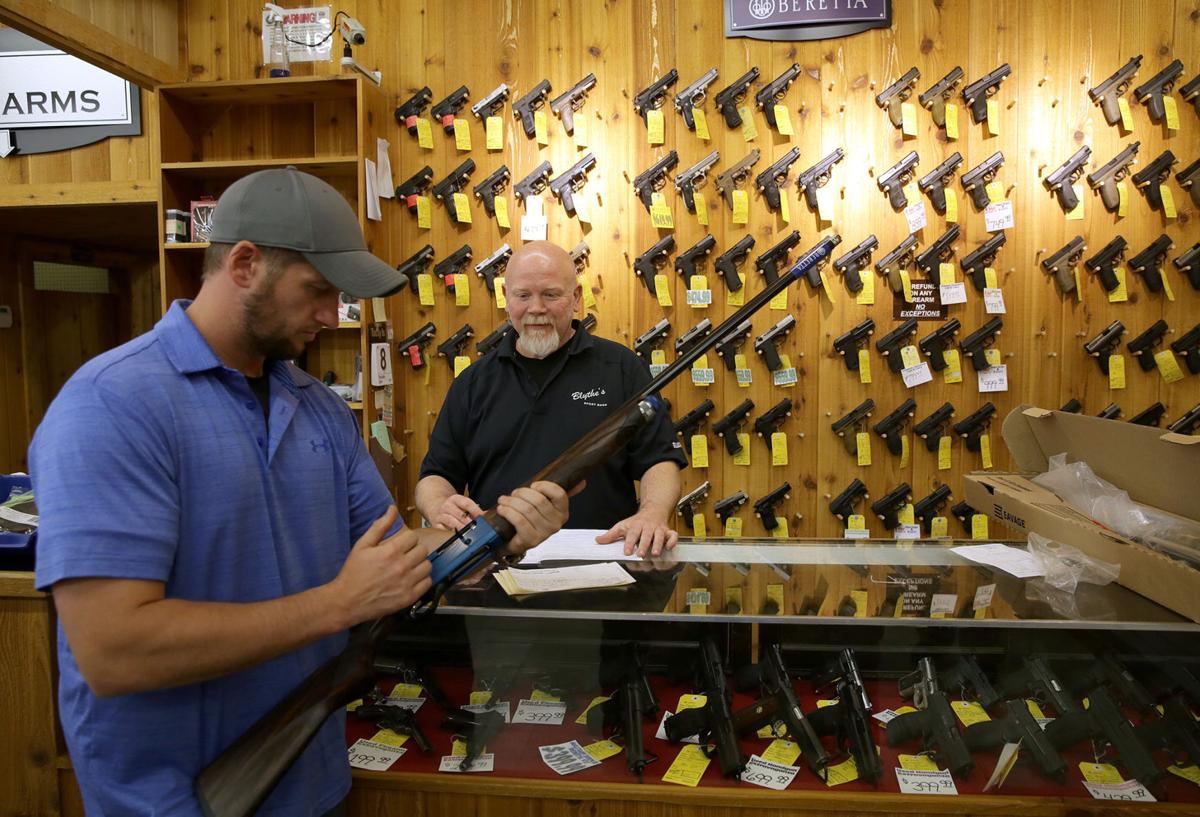 Blythe's Sport Shop sales associate Shanon Mathis, center, sells a shotgun to Jake Schmitt, left, of Cole City, Thursday at the store in Griffith. Schmitt is a lifelong second-generation customer at the store. 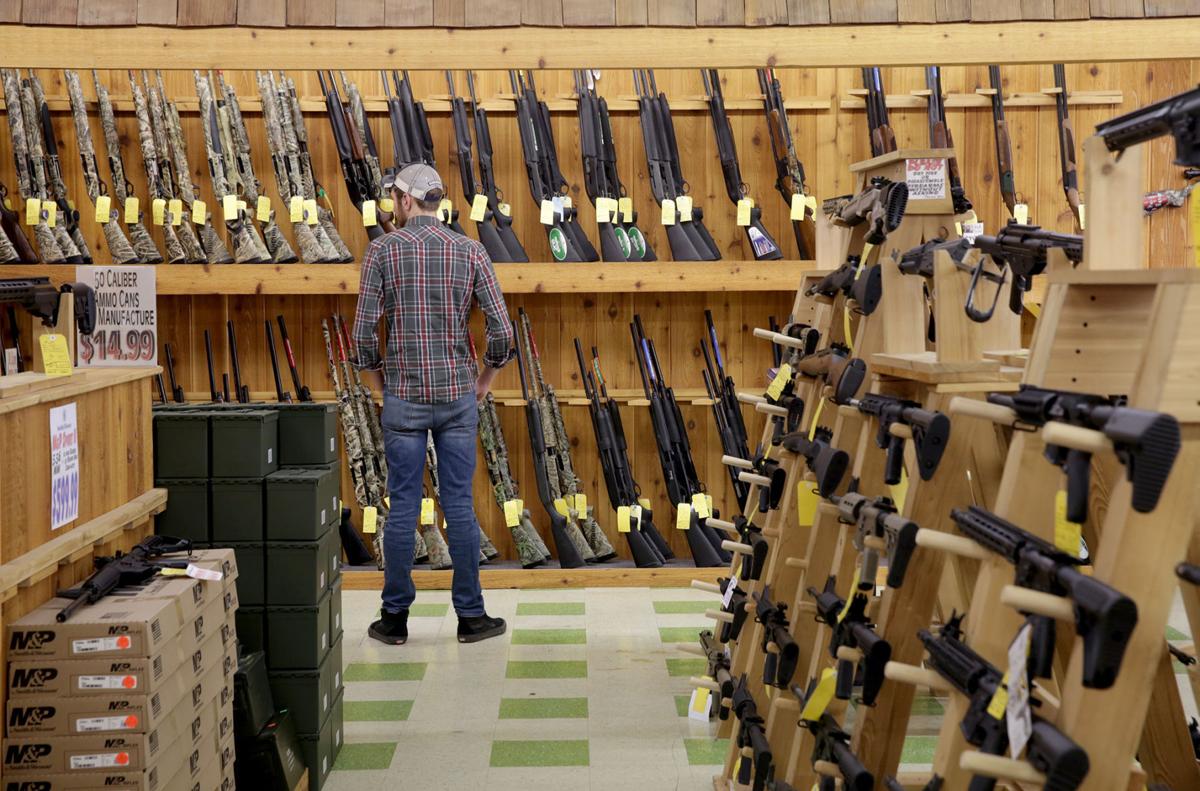 Jason Hiles looks at guns Thursday at Blythe's Sport Shop in Griffith. The store opened in downtown Griffith 65 years ago. 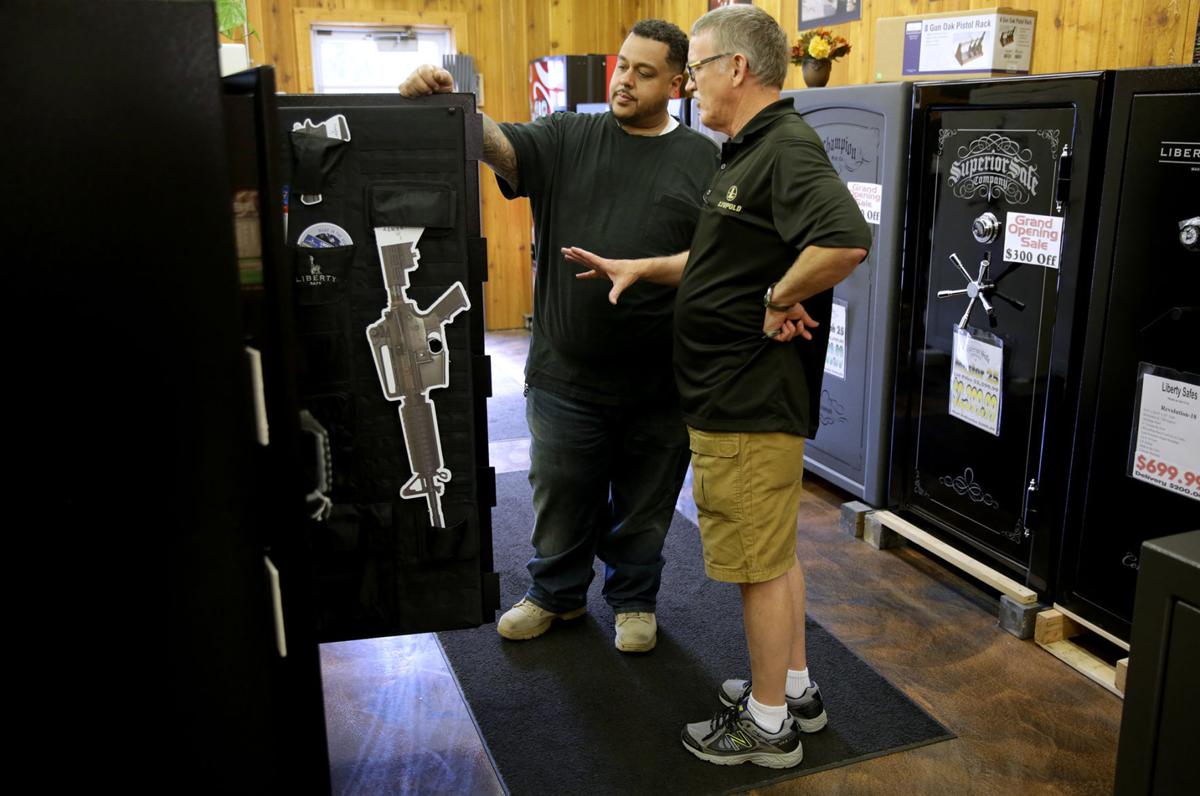 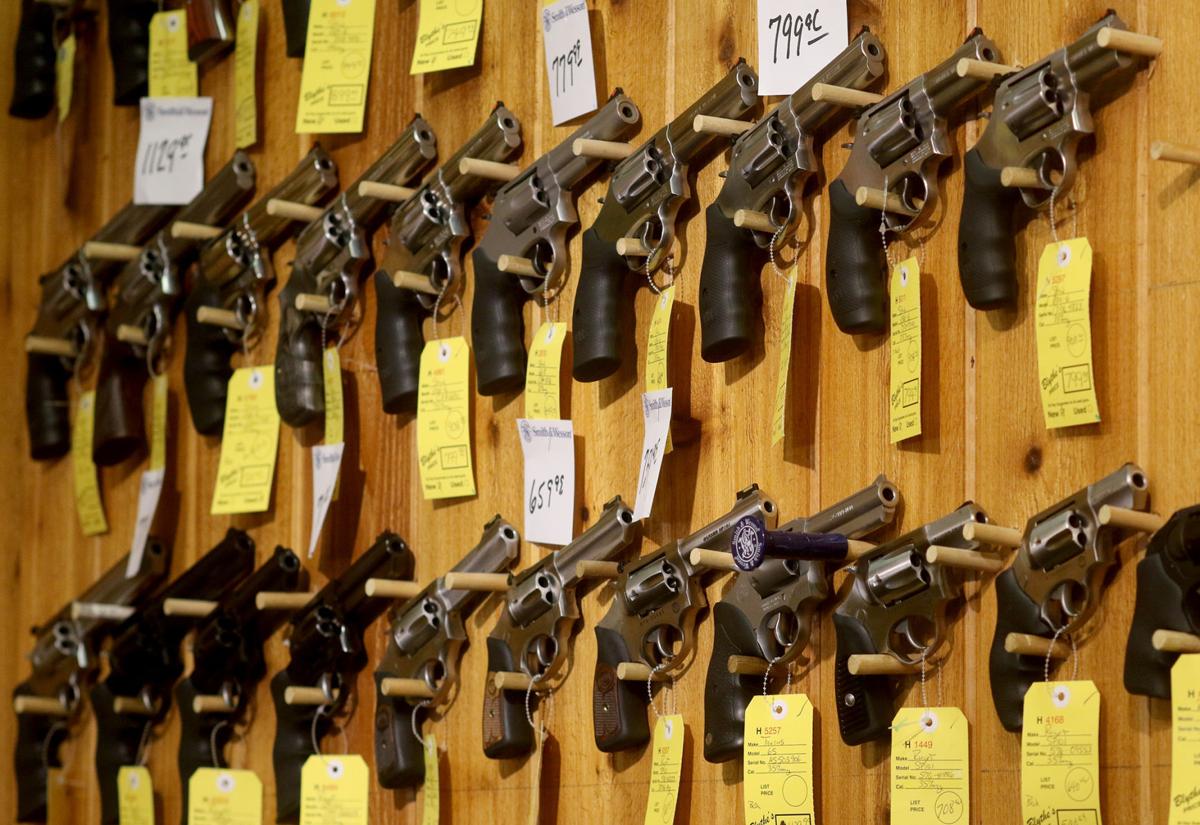 Revolvers for sale at Blythe's Sport Shop Thursday in Griffith. The store is celebrating 65 years in business. 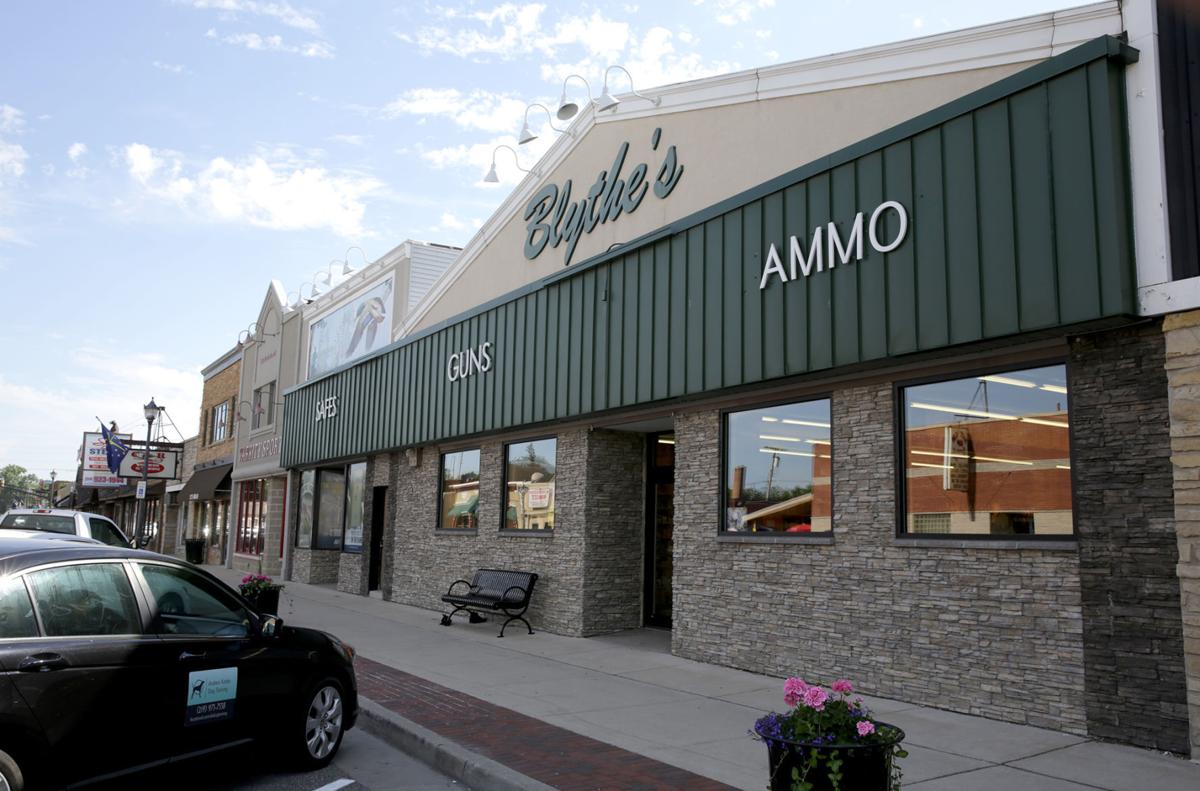 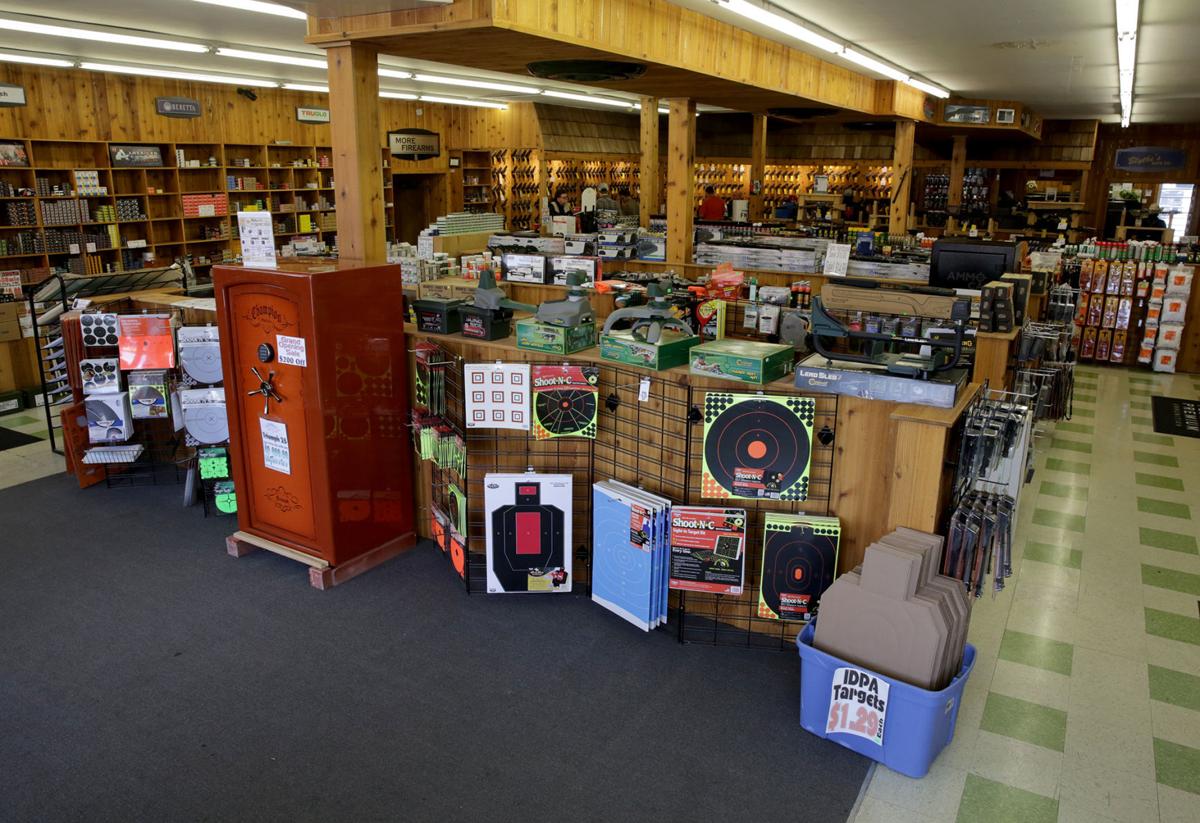 Blythe's Sport Shop sales associate Shanon Mathis, center, sells a shotgun to Jake Schmitt, left, of Cole City, Thursday at the store in Griffith. Schmitt is a lifelong second-generation customer at the store.

Jason Hiles looks at guns Thursday at Blythe's Sport Shop in Griffith. The store opened in downtown Griffith 65 years ago.

Revolvers for sale at Blythe's Sport Shop Thursday in Griffith. The store is celebrating 65 years in business.

Blythe’s Sport Shop is marking its 65th year in Northwest Indiana, and the first in which it hasn't been owned by the Blythe family.

Jeff Neeley, the new president and owner of the long-standing sporting goods stores in Griffith and Valparaiso, acquired Blythe's for an undisclosed sum from the family that ran it for four generations. He is looking to add a few more stores in the future, and maintain the customer service and personal touch that has made Blythe's an institution in Northwest Indiana.

Blythe's is celebrating a "grand opening" under the new ownership throughout the month of June. Both stores will have weekly specials, door prizes and drawings.

“This grand opening event celebrates Blythe’s 65th year in business and gives us an opportunity to meet with many long-time loyal customers as well as new customers,” Neeley said. “We are committed to the same foundation the Blythe family built this business on — integrity and family values.”

Blythe's opened at 138 N. Broad St. in downtown Griffith, back when the town was still out in the country, and expanded to 2810 Calumet Ave. in Valparaiso in 1980. It sells goods such as firearms, knives and safes. It was originally billed as "Your Family Fun Store," with a focus on hunting, fishing, archery and athletic wear.

It now claims to have "the largest selection of guns, ammo and safes" in Northwest Indiana, and adds new inventory daily.

Former owner Dick Blythe, who ran the business from 1956 to 1996, won multiple accolades over his lengthy business career, including from Outdoor Life Magazine, the Hammond Sports Hall of Fame and Southern Illinois University. He also won the Sagamore of the Wabash, Indiana's highest honor, for leading the effort to spearhead the restoration of the Grand Kankakee Marsh.

He also helped build up a well-respected local business that thrived while corporate competitors such as Gander Mountain and Cabela's have faltered, recently filing for bankruptcy or getting bought out, respectively.

Neeley wants to maintain the Blythe family's personal touch, saying he goes out on the sales floor at least once a day to listen to customers.

He wants to add locations in the area over the next few years, but says growth will be slow and deliberate.

"We want to be integrated into the community as much as possible," he said. "We want to get to know people and how to serve them. We don't just want to do a copy-and-paste in different locations. We'll never grow faster than we can keep in touch. We want to know the local market."

Neeley also plans to add new products at the Blythe's stores, and has opened a new safe showroom in Valparaiso. He said he's committed to keeping a wide inventory and low prices.

“Many customers first visit us because of our low prices and then return because of our service,” he said. “Our commitment at Blythe’s is much more than merely earning your business, it’s to earn you as a customer and friend."

One of Northwest Indiana's largest and best known community theaters is entering its last act.

Jewel attempting to buy Strack & Van Til for $100 million

Sales of the locally made Ford Explorer shot up 20.7 percent in May for the sport utility ve…

Strack & Van Til being sold, nine Ultra stores to close

Rue21 store to close in Valpo

Blythe's Athletics in Valparaiso grew revenue by double digits last year despite the addition of a new Dick's Sporting Goods a mile down the road.

Police and Bureau of Alcohol, Tobacco, Firearms and Explosives investigating burglary at Blythe's

GRIFFITH — Griffith Police and the Bureau of Alcohol, Tobacco, Firearms and Explosives are investigating a Wednesday morning burglary at Blyth…

GARY — A Hammond man hunting in a marsh on private property suffered a self-inflicted gunshot wound to his left forearm, according to the Ind…

A new restaurant operator has replaced Meyers Castle at the Lost Marsh Golf Course in Hammond, one of the premier courses in north Lake County…