US to invest $3B into antiviral pills for COVID-19, Fauci says 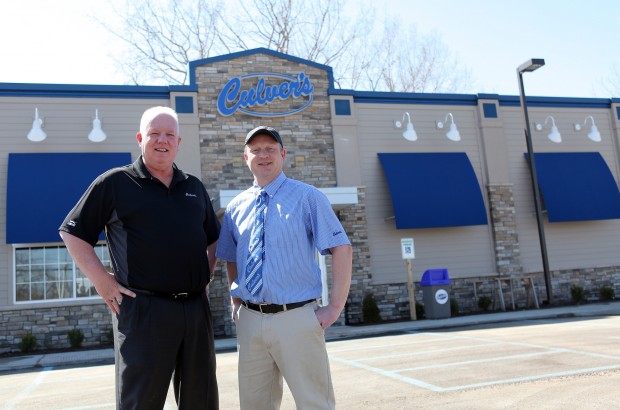 Fred Terpstra, left, and his son-in-law, Mike Wondaaal, are co-owners of a new Culver's in Highland, which is opening Monday. 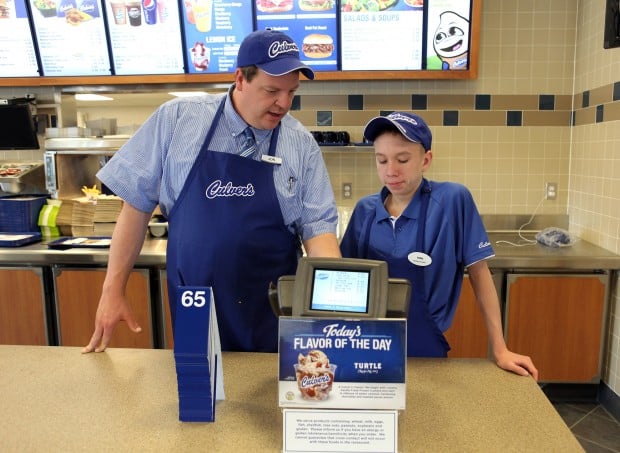 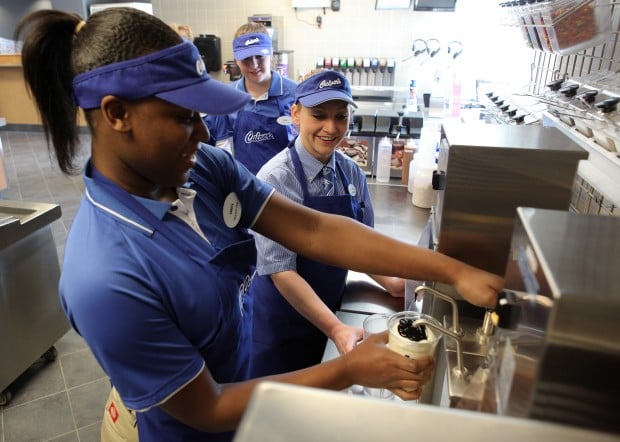 Culver's second assistant manager Chanda McClain, center, trains new employee Saraya Smothers, left, on how to make a milkshake before the April grand opening of the Highland restaurant. Many business owners such as Culver's franchisee Fred Terpstra still have a lot of questions about the Affordable Care Act.

HIGHLAND | Opening his third Culver’s franchise in Highland is both the continuation and a highpoint of Fred Terpstra’s 40-year business career.

The 4,200-square-feet, 98-seat fast-food restaurant on the southwest corner of Ridge Road and Cline Avenue opens for business at 10 a.m. Monday and joins Terpstra’s Culver’s Frozen Custard and Butterburgers stores in Merrillville and Lansing.

“It’s everything I hoped it would be,” Terpstra said. “I like the fast-food business and that we take care of 3,000 to 4,000 customers a week. It’s in my blood and will always be there.”

The stores are co-owned by his son-in-law, Mike Wondaal, and all employ the talents of the Terpstra family. Fred Terpstra’s son, John Terpstra, is an attorney with the Schererville law firm of Hinshaw & Culbertson LLC and does the franchises’ legal work. Daughter Shaina Rudolph does all of the accounting, while another daughter, Nicole Wondaal, who has a master’s degree in guidance counseling, helps in all three stores.

“If you can’t have your family involved in your business, what kind of father would you be,” Terpstra said. “After I’m gone, this will be great for my kids and 12 grandkids.”

Terpstra and Wondaal tore down a gas station to build the new Culver’s, which will be staffed by 60 employees and open seven days a week from 10 a.m. to 10 p.m.

Terpstra’s business experience dates to the 1970s when he owned Highland Department Store with his father, John, and their partner, Peter Groot. The Terpstras sold the business in 1992 with Fred then going into several businesses including car washes and quick oil change stores, and eventually portable toilet leasing through Terpstra Sanitation.

In 2006, Terpstra sold everything and became a Culver’s franchisee.

"I liked the concept," he said. "It’s a family company with a very wholesome environment: nonsmoking, nonalcohol, and has a lot of the same values as Highland Department Store. It’s good fit for me.”

Terpstra opened the Lansing location in 2006 and the Merrillville store a year later.

The family-owned Wisconsin-based company has an individual franchise fee of $55,000 for acquisition of a Culver's franchise, according to its website. Plus, potential franchisees need to have a minimum of $350,000 in liquid assets to qualify to own each Culver’s franchise. The chain currently has 450 franchises in 19 states.

“My stores have done well,” Terpstra said. “When Culver’s does national TV advertising it increases sales, but business is pretty good year in and year out. Culver’s sets itself apart from other fast food stores by its hospitality, friendliness, cleanliness and the quality of food that’s all served in a timely manner."

Although there are many variables, including food and labor costs, that determine the success of a quick-service restaurant, Terpstra said he’s never been sorry he’s taken on the challenge.

The new store will have a formal ribbon cutting at 9 a.m. April 26th with Craig Culver, the chain’s co-founder and chief executive office, in attendance.

A disgruntled gun-toting customer fired shots Sunday after being told there was no more pizza at a local Little Caesars, police said.

Cleveland-Cliffs forecasts it will bring in $5 billion this year

Cleveland-Cliffs projects it will bring in $5 billion in EBITDA this year, up from earlier forecasts of $4 billion during its first-quarter earnings and $3.5 billion at the beginning of the year.

Phillips Chevrolet, a car dealership with lots in Lansing, Frankfort and Bradley, was named DealerRater’s 2021 Dealer of the Year for Chevrolet.

VALPARAISO — Small businesses in the city are eligible to receive grants of up to $10,000 to help them stay in business.

Chicago Assembly Plant to shut down again over semiconductor shortage, laying off thousands

Ford will again shut down the Chicago Assembly Plant and lay off thousands of workers because of the worldwide semiconductor shortage that's greatly disrupted automaking.

U.S. Steel has entered an agreement to sell its freight rail subsidiary, Transtar, which operates six railroads including the Gary Railway Co.…

Sammy Hagar to headline Festival of the Lakes

Sammy Hagar, the Red Rocker and Van Halen singer who can't drive 55, will headline Festival of the Lakes in Hammond this year.

Centier opening a museum about the bank's history in downtown Whiting

Centier Bank plans to open a historical museum charting its 126-year-old history in its flagship branch in downtown Whiting.

Fred Terpstra, left, and his son-in-law, Mike Wondaaal, are co-owners of a new Culver's in Highland, which is opening Monday.

Culver's second assistant manager Chanda McClain, center, trains new employee Saraya Smothers, left, on how to make a milkshake before the April grand opening of the Highland restaurant. Many business owners such as Culver's franchisee Fred Terpstra still have a lot of questions about the Affordable Care Act.