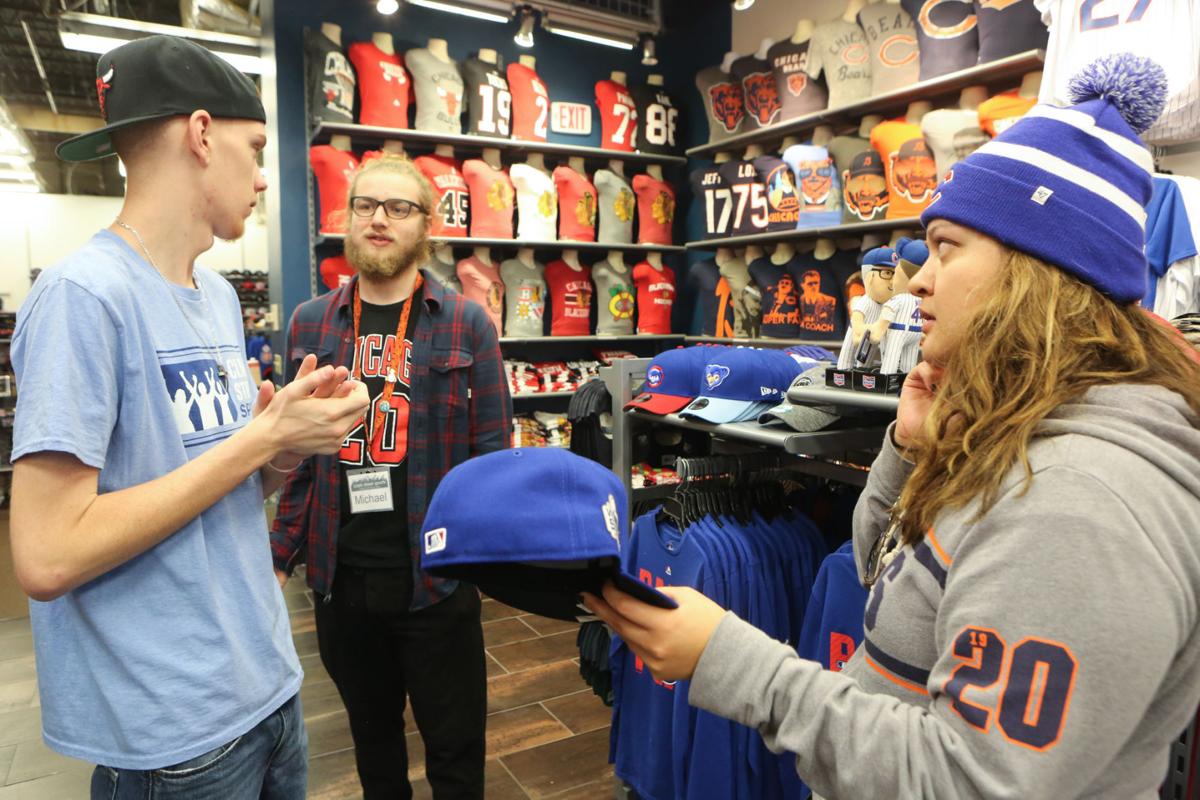 Leticia Benitez of Schererville, right, gets assistance from Matt Stone, left, and Michael Wagner at Clark Street Sports as she shops for Cubbie gear in Southlake Mall. 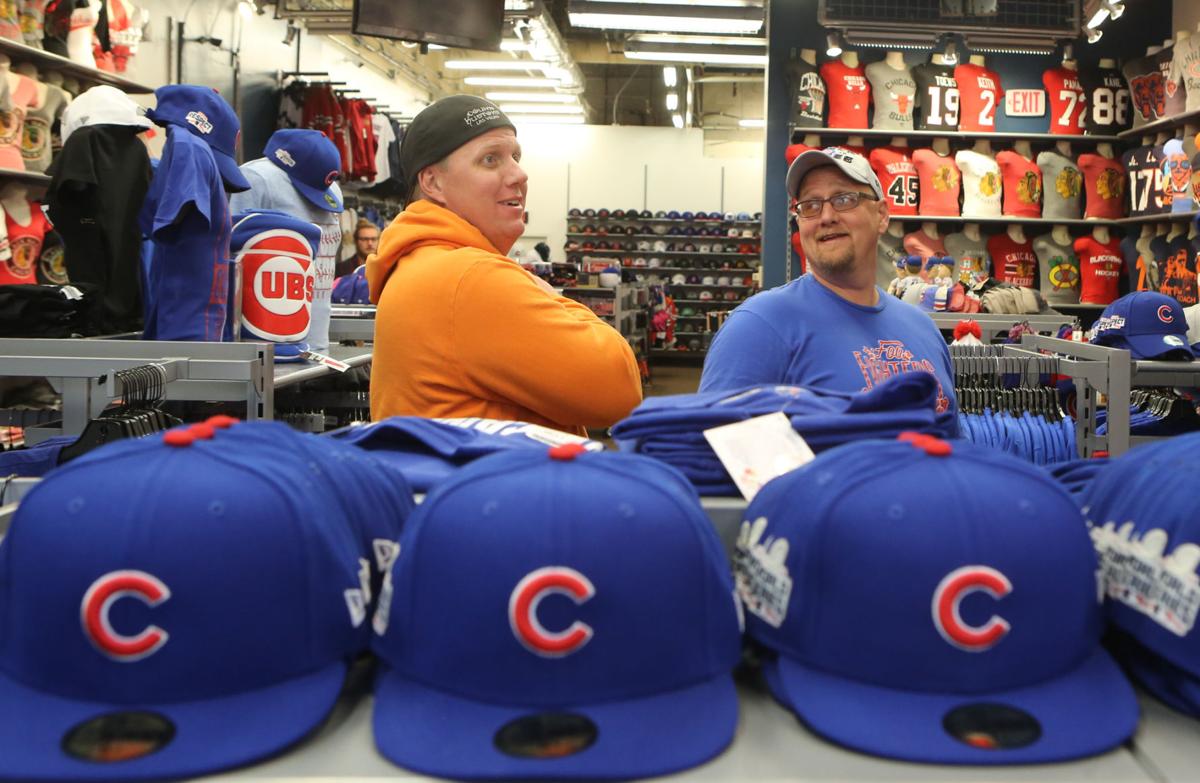 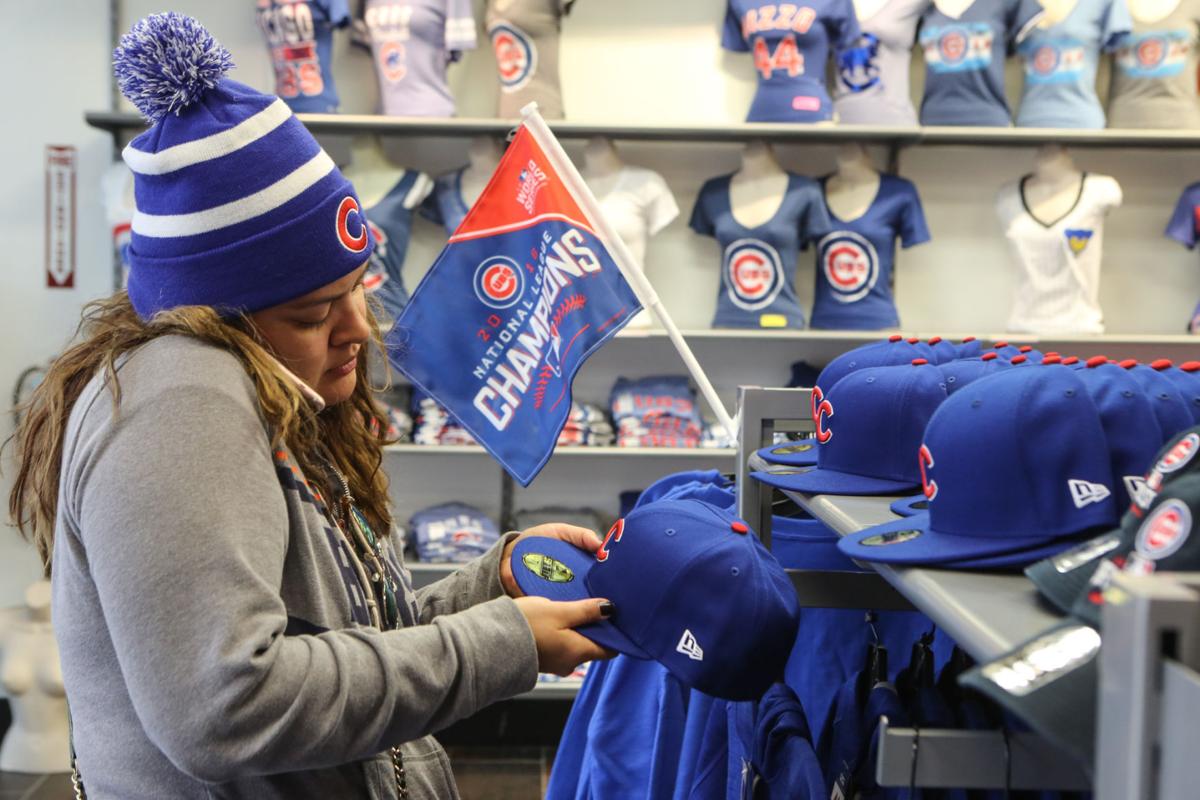 Leticia Benitez, of Schererville, consults with her husband as she shops for Cubs caps at Clark Street Sports in Southlake Mall. 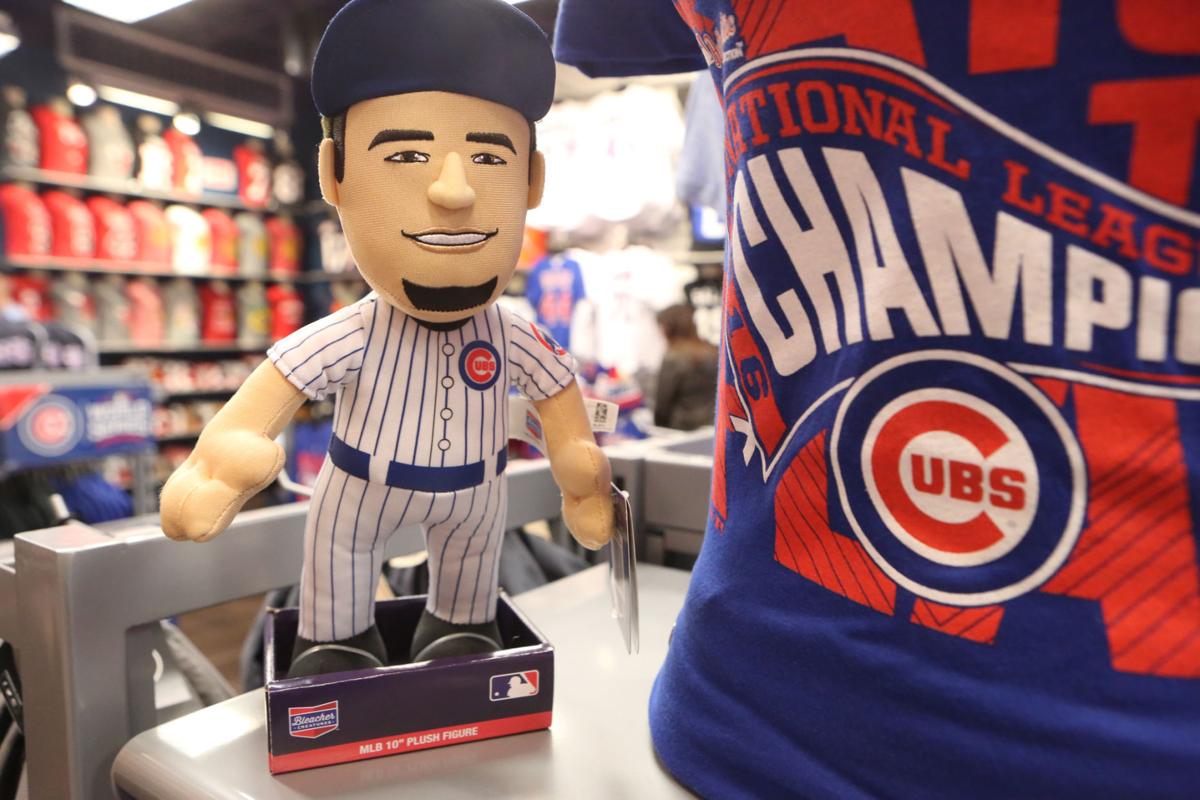 Cubs plush figures such as Kyle Schwarber's are available at Clark Street Sports in Southlake Mall. 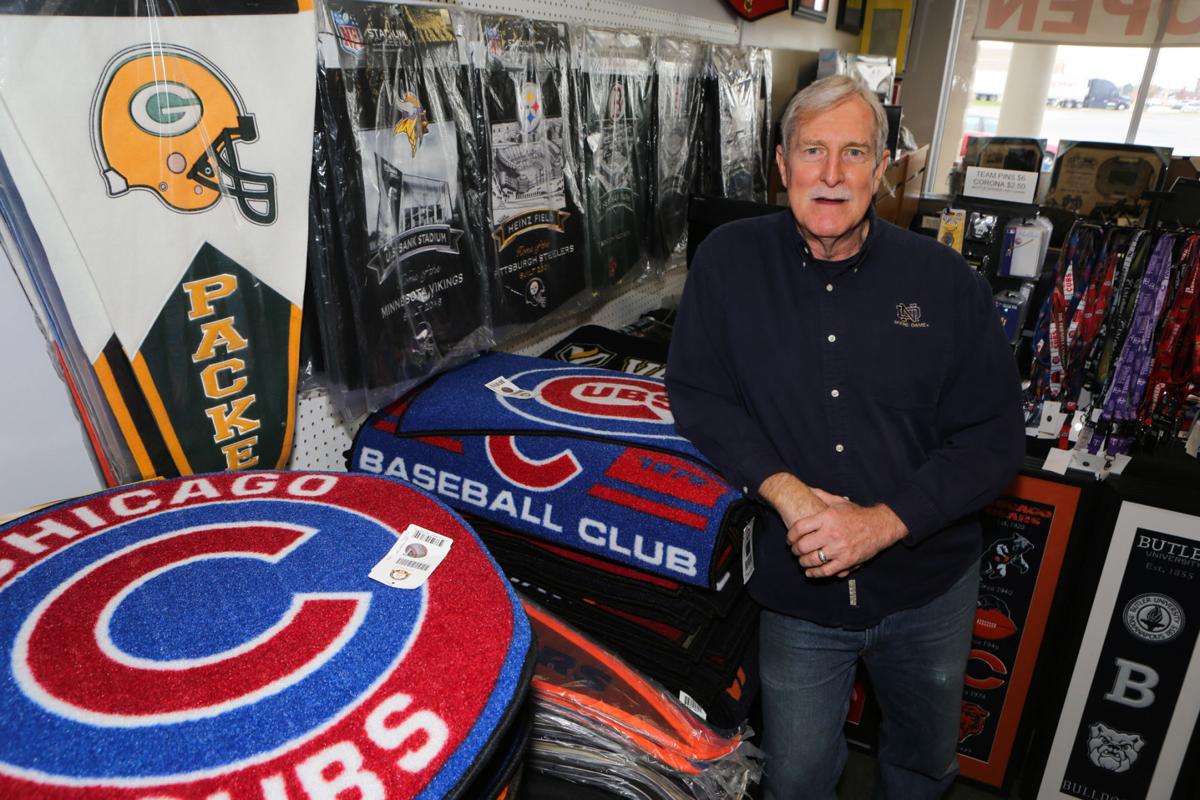 Bob Wahlman is the owner of Sports & Collecti-Balls in Hobart. Shops across the Region are experiencing a run on Cubs gear and collectibles. 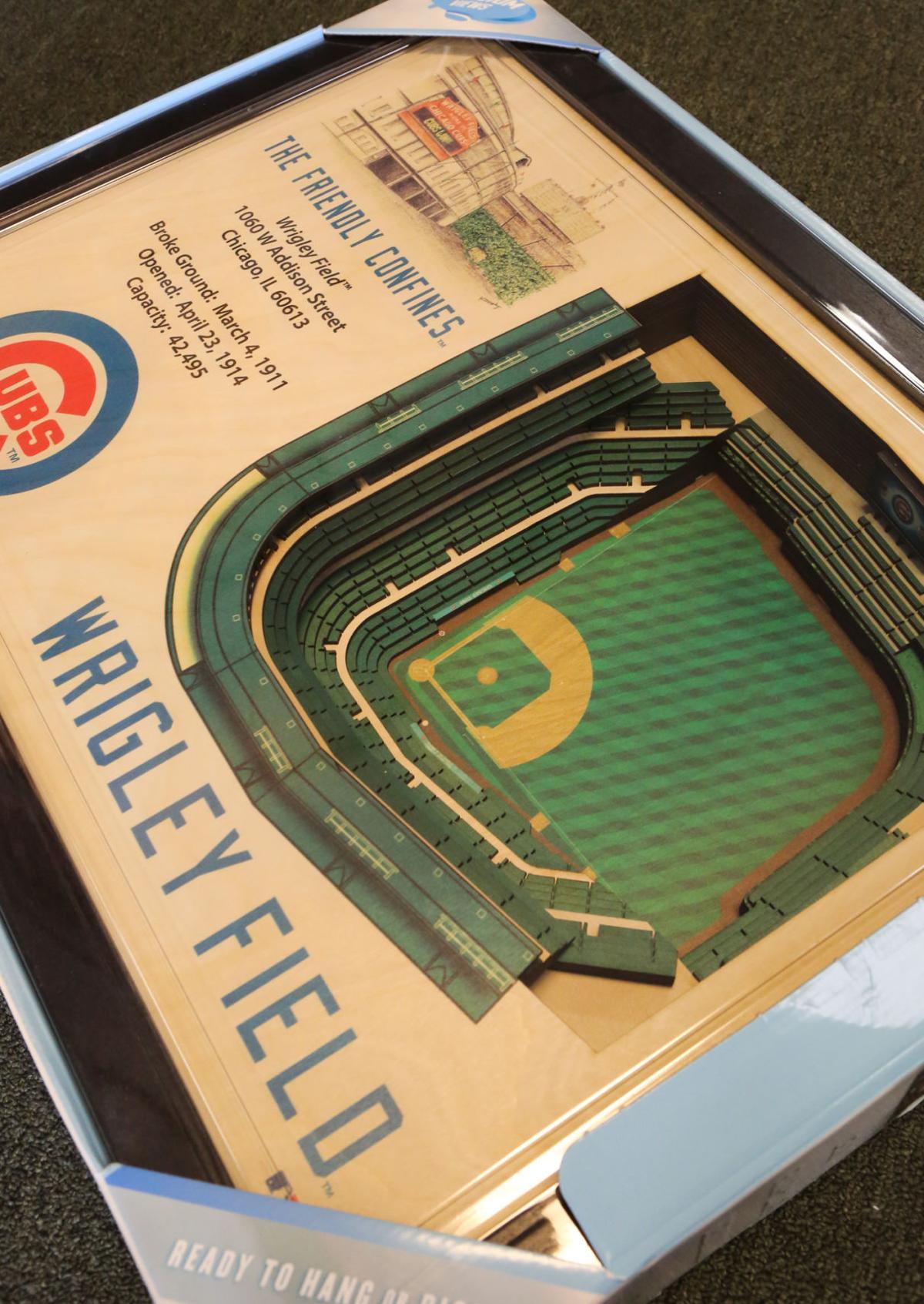 A wooden replica of Wrigley Field is available at Sports & Collecti-Balls in Hobart. It is made in Warsaw, Indiana. Sales of Cubs gear and collectibles of all types are being fueled by the team's World Series run.

Shoppers rarely line up waiting for stores to open in the Southlake Mall unless it’s Black Friday or Nike is about to drop new Air Jordans.

But fans have stretched around Sears waiting to get into Champs Sports in the mall in Hobart to get their hands on some official Cubs World Series merchandise, which has sold out within minutes at some local retailers.

If it’s got a Cubs logo or a W on it, fans have been grabbing it and rushing to the register, often without even checking the price.

And the gear isn’t always cheap. Official Cubs World Series Bound jerseys are retailing for $134.99 on the MLB Shop online.

“There’s a lot of Cubs mania,” said Karen Peretin, a salesperson at Varsity Sports in Griffith. “We can’t keep the stuff in stock. We’re at the mercy of the companies to restock, but we’re getting new stuff each day.”

Bob Wahlman, owner of Sports & Collecti-Balls in Hobart, said droves of people have been buying the W flags like the one flown over Wrigley Field after a Cubs win to place on the graves of loved ones in cemeteries who never got to see their beloved Cubs in the World Series. He sold out of W car flags almost immediately after the Cubbies beat the Dodgers to win their first National League pennant since 1945, and doesn’t know how soon he’ll be able to get the next shipment in.

Magic MacKeigan, owner of Magic Sports in Valparaiso and LaPorte, said he’s been seeing a run on jerseys from restaurant employees who are now allowed to wear Cubs gear to work.

Stores have been cashing in on the fandemonium over the historic World Series run. Dick’s Sporting Goods in the Highland Grove shopping center in Highland has been hanging a “NLCS Merchandise Available Here” banner over its entrance, where it’s hand-painted the Cubs logo, a W flag and the iconic Wrigley Field scoreboard. Cubs gear, like a “Black Frames and Day Games” T-shirt alluding to manager Joe Maddon’s signature glasses, greets customers when they first walk in and stretches down the main aisle all the way to the back of the store. Cubs balloons are festooned over the river of blue and white T-shirts, sweatshirts and winter caps.

The Schererville Strack & Van Til has a knight wearing a Cubs league champion T-shirt and several displays of Cubs merchandise, including a throne made of cases of Budweiser crowned with a replica of the Wrigley Field scoreboard. The supermarket has baked cakes and cupcakes decorated to look like baseballs, slapped Cubs logo stickers on its pre-made sandwiches, and adorned its deli cases with signs like “Fly the W” and “I ain’t afraid of no goat.”

Cubs fans have been eating up Cubs doughnuts on sticks at Munster Donut, and toasting with Curse the Goat Beer at Michigan City’s Shoreline Brewery.

“Since the curse has been lifted, we have seen an increase in sales of the Bourbon Barrel Aged Dopple Bock, Curse the Goat 750ML bottles,” Shoreline Sales & Marketing Manager Ryan Adomitis said. “Sales have increased 50 percent.”

Ein Bock means Billy Goat in German, and the beer style has long been associated with goats.

“Curse the Goat is released around Lent every spring celebrating opening day of baseball,” Shoreline Brewer and Founder Sam Strupeck said. “Originally in 2006 when we first brewed the beer I was going to call it Curse of the Goat when an employee suggest we call it Reverse the Curse, and I replied, ‘Yeah! Curse that goat.’ Thus it became Curse the Goat.”

The craft brewery has even started selling a 24X36 Curse the Goat poster of a goat in the batter's box at Wrigley, which was illustrated by Colby Aitchison of Graphic 22 in Hobart.

Demand is unprecedented. Region residents have been buying up more Cubs World Series commemorative gear than they did after the Blackhawks won their Stanley Cups, said Milan Savich, store manager of Clark Street Sports in the Southlake Mall.

“There was a lot of excitement going into the season, and they got off to a strong start, so sales have been up all year,” he said. “But this is bigger than the Stanley Cup. It’s getting World Serious.”

Clark Street Sports sold out of World Series celebratory caps in two days, and has had to restock several times a day, sending employees out on runs to pick up more gear at a warehouse and even Chicago Midway International Airport.

“It’s like the holiday season,” he said. “It’s so awesome and exciting. There’s such a positive atmosphere that it’s not stressful at all to be this hectic. It’s made it fun.”

Fans have been lining up before Clark Street Sports opens at 10 a.m. to buy jerseys, hats, shot glasses, car stickers and W flags. Javier Baez jerseys have been selling well because of how hot he had been in the playoffs, but the Cubs roster is so deep that most of the players’ jerseys have been flying off the shelves, along with Maddon’s jersey, Savich said.

“It’s interesting because it’s got no logo on it, but people want it because everybody know what it means,” he said. “People are getting emotional. A 77-year-old woman said she had been a Cubs fan for 71 years and can’t believe it. She was in tears.”

“I’ve seen people reselling them online for $200,” she said.

The store has met its sales quota for the day in just two hours. Overall sales have shot up at least 20 percent, as the store has quickly sold out of whatever Cubs merchandise it can stock. Champs has had to bring in more cashiers to handle the crowds, because the line in the morning has wrapped around Sears.

“We’re working with our merchandiser to get shipments in quicker,” she said. “We have to figure out some type of system. We’re predicting that if they win the World Series it’s going to be literally outrageous.”

Black Friday has crept forward to Thanksgiving over the last few years, but this year a number of retailers are pushing back.

Cubs gear continues to sell at a frantic clip at local retailers after the team ended its historic 108-year World Series drought, and is one o…

Munster Donut forced to close for third time this year

It's been a rough year for one of the Region's most popular doughnut shops.Munster Donut was forced to close because of an emergency Monday fo…

After 108 years, the Chicago Cubs finally ended the longest and most romanticized drought of futility in professional sports by bringing home …

Highland-based Strack & Van Til has invested in an upgrade of its Ultra Foods supermarket in Kankakee, Illinois.

Strack & Van Til renovated its south Valparaiso supermarket on U.S. 30, which now has a sushi bar, a hummus and olive bar, a smoker, a gou…

Munster Donut to reopen next week

After nearly a month's closure, the beloved Region institution Munster Donut will come back to provide the masses with fresh glazed donuts, do…

If you're proud of the Blackhawks' third Stanley Cup in six years, you can show it by getting official championship T-shirts, hats, varsity ja…

A new sports collectible store has opened near the Southlake Mall in Hobart.

Cubs back in World Series, goat curse back on forefront

CHICAGO — Chuck Logan heard about it from his dad for years. Bill Sianis was born into it. And Lennie Merullo was there the day it happened an…

CROWN POINT — Luke Savoie knew that if he couldn’t be at Wrigley Field for the World Series, he had to be the next best place — watching the g…

CHICAGO — One thing that isn't dead on Halloween is Chicago Cubs' fans hope that the team can still win it all.

McAlister’s Deli and Jimmy John’s are giving Northwest Indiana residents more options of where to go to grab a sandwich.

Duneland residents will have to find somewhere else to "eat good in the neighborhood."

Leticia Benitez of Schererville, right, gets assistance from Matt Stone, left, and Michael Wagner at Clark Street Sports as she shops for Cubbie gear in Southlake Mall.

Leticia Benitez, of Schererville, consults with her husband as she shops for Cubs caps at Clark Street Sports in Southlake Mall.

Cubs plush figures such as Kyle Schwarber's are available at Clark Street Sports in Southlake Mall.

Bob Wahlman is the owner of Sports & Collecti-Balls in Hobart. Shops across the Region are experiencing a run on Cubs gear and collectibles.

A wooden replica of Wrigley Field is available at Sports & Collecti-Balls in Hobart. It is made in Warsaw, Indiana. Sales of Cubs gear and collectibles of all types are being fueled by the team's World Series run.