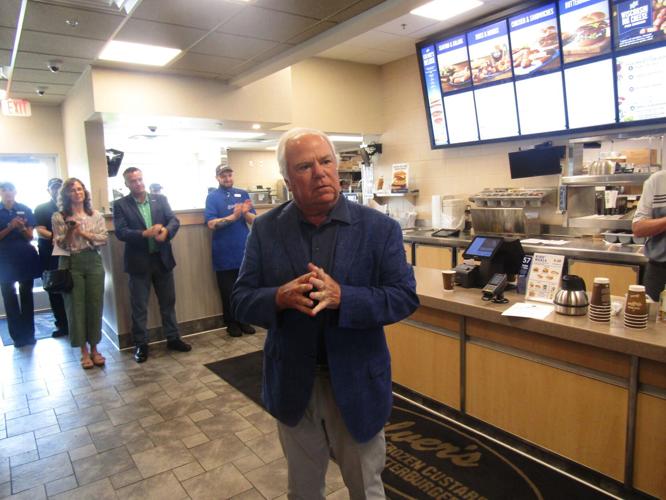 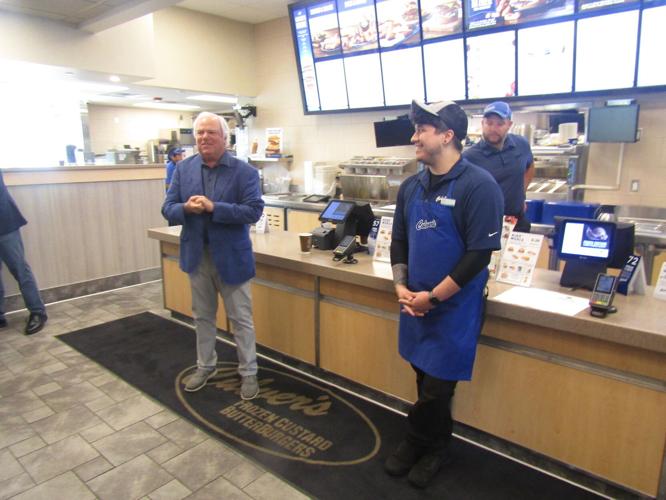 HAMMOND — Culver's is now serving its famous butter burgers, cheese curds and custard just off the highway in Hammond.

Co-founder Craig Culver, local franchisee Fred Terpstra, Hammond Mayor Thomas McDermott Jr. and other dignitaries were in attendance at the grand opening at 7905 Cabela’s Drive by Cabela's. The Wisconsin-based fast-casual chain known for its elevated take on burgers and other fast-food staples is located off the Indianapolis Boulevard exit off the Borman Expressway.

“We are pleased Culver’s has chosen Hammond to set down some roots and grow their business model,” McDermott said. “Their team is showing us that we are relevant to them and that Hammond is worth the investment.”

The restaurant will employ 65 workers.

Culver's, which now has six locations in Northwest Indiana, started in Sauk City, north of Madison in Wisconsin, Culver said.

"If you've ever been to the Dells or through Wisconsin, you probably passed by the original restaurant, which we opened in 1984," he said. "It was family-owned back then, and it's still family-owned right now."

Culver's has now grown to more than 870 locations across the Midwest.

"A lot of people make fun of flipping burgers for a living," Culver said. "Well, when you flip a lot of burgers, it's a pretty good business. I'm very proud of what we do. We're in the food business. But what we're really in is the people business. All these wonderful team members, that's the magic to any business, I believe. It's surrounding yourself with good people."

His observation is rooted in a long family history in the restaurant business.

"My family's been in business since I was this high, in the restaurant business in one form or another," he said. "My parents weren't college-educated or anything like that, but they were smart and they were good people. Looking back at my parents, they were so good surrounding themselves with people who knew how to say please and thank you and my pleasure and respected the people around them. We've tried to keep that going at Culver's."

Culver's has grown by partnering with families like the Terpstras who own franchises, Culver said.

"We've got 873 restaurants open in 26 states starting with one little restaurant 38 years ago," he said. "People ask me, did you have a grand plan? I would love to say, 'yeah, I knew exactly.' But I did not. Good things happen along the way when you're trying to do good things."

"It wasn't always easy. It never is just easy," he said. "The first year of business we were so lucky to have a banker who believed in the Culver family. We lost so much money. But we persevered. I was ready to throw up the white flag. I thought we need to do something else. We're not going to make it. But my family was around me, and they said we're going to do what it takes. If that means working early in the morning to late at night seven days a week, that's what we're going to do. And that's what we did. But we were fortunate to have a banker who believed in us that first year. We didn't make a buck at the business until our third year."

"One thing I say to our franchisees, our owners, our managers is just because you put that oval sign out by the road, it doesn't guarantee you success. It doesn't," he said. "We leaders have to drive the business, whether it's Culver's, whatever business it's in. We leaders have to drive the business day in and day out and be there for our people."

'Trying to make a difference'

Hammond native Bob Chapek stepped down as Disney CEO less than three years after taking the helm of the global entertainment giant in a move media outlets have characterized as "shocking," "stunning" and a "ruthless ousting."

Harry Porterfield, who delivered the nightly news to Chicagoland for decades, sold the Miller Beach home that he's owned for more than a half-century.

Kroger-Albertsons merger would reshape grocery landscape across Region and Chicagoland

Two of the biggest grocery companies in the country, both of which operate supermarkets in Northwest Indiana, plan to merge in a deal that will shake up the grocery landscape.

Global cosmetic firm Orean Beauty relocates from South Holland to Hobart, will hire as many 120 workers

“The relocation from a small initial base in Illinois to our new larger premises in the second largest manufacturing state in the US allows us to attract some incredible talent and provides room for investment and growth."

The luxury women's clothing store Katie Rose Boutique was long a lonely retail island in the mixed-used Centennial Village development at the corner of 45th Street and Calumet Avenue in Munster. But now Centennial Village is filling in as the store marks its first anniversary.

Raising Cane's is alleging the landlord tricked it into signing a long-term lease after failing to disclose the previous owner already granted McDonald's the exclusive right to sell chicken products there.

NIPSCO ranked last in the Midwest among midsized utilities for customer satisfaction, according to J.D. Power.