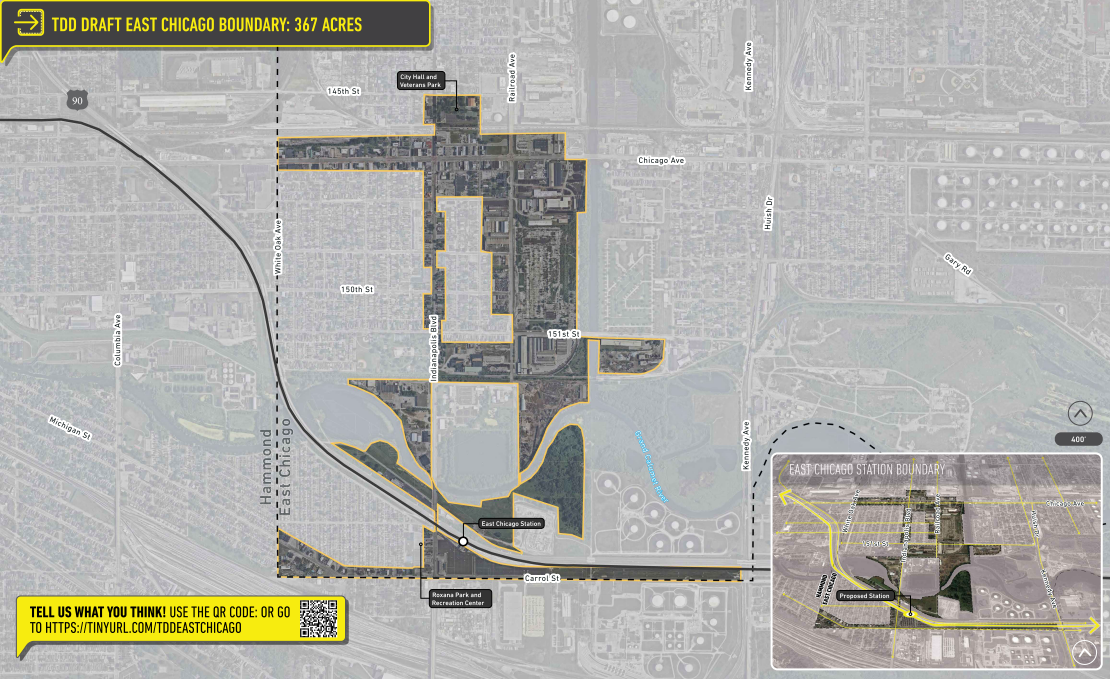 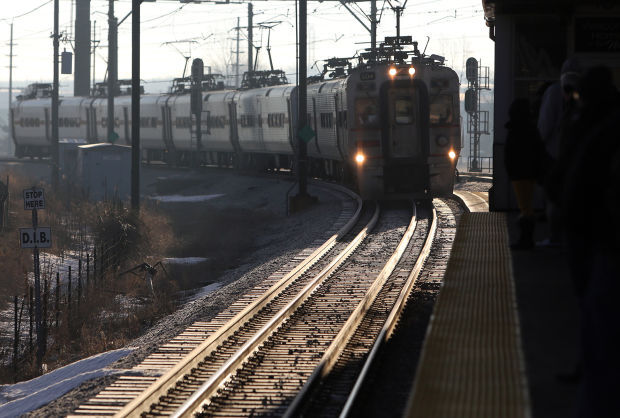 The East Chicago South Shore station sits amid a landscape whose uses range from residential to industrial, with a small business corridor, civic buildings and public parks mixed into a community split by the Grand Calumet River’s curving path.

Promoting economic growth and development in that challenging environment was the topic Thursday of an online presentation of a Transit Development District that will be anchored by the East Chicago station, the busiest of all the commuter railroad's stops.

The Indianapolis Boulevard corridor, the Roxana residential neighborhood and the abundant open and underutilized spaces near the station present opportunities for development that the tools of a TDD could help spur, representatives of the city, the Northwest Indiana Regional Development Authority and its consultants said.

Eric Lucas of the firm MKSK told viewers on Zoom and Facebook that the TDD would “use economic development tools to support the kind of growth you would like to see in your community.”

The TDD's financial tools include the growth in local income taxes and property taxes within the TDD after it's established, revenue that can be leveraged by the RDA to provide assistance to development projects.

The RDA team looks at properties that might be appropriate for one of five general levels of improvement: the adaptive reuse, preservation or strengthening of already developed properties, the infill of “gaps” in developed areas, and the redevelopment of properties left dormant or significantly underutilized.

“We can get down to the site level,” Lucas said. “We’re looking at them on a parcel-by-parcel basis.”

The TDD proposal — at 367 acres, 47 more than the one-half mile statutory limit it will ultimately need to meet — is entirely within East Chicago, stretching north from the immediate station area, which is near the municipal line with Hammond.

South of the railroad tracks, the TDD takes in the north side of Carrol Street/Michigan Street from just west of Kennedy Avenue to the station, along with the business area on Indianapolis Boulevard. It goes west to take in businesses properties along the south side of the Roxana neighborhood, to the East Chicago-Hammond municipal border.

North of the tracks and south of the Grand Calumet River, the TDD includes open land on each side of Indianapolis Boulevard. Further north, the TDD stretches up the boulevard corridor and includes industrial areas east of it, excluding the East Chicago Sanitary District plant and some residential and park land. The TDD adds a significant stretch of Chicago Avenue between the municipal line and the Indiana Harbor and Ship Canal, and includes the City Hall area at 145th Street.

The TDD’s irregular footprint takes into consideration previous planning efforts in the city, and focuses on the city’s goal of invigorating business activity.

“It’s mostly a corridor approach,” MKSK’s Aaron Kowalski said. “We were pretty surgical in our approach.”

Beyond the business corridors, “industrial areas are really an important part of the equation,” he said, as is consideration of vacant properties.

“We think about those areas in terms of, where could future investment occur?” Kowalski said.

The East Chicago proposal will now be revised to fit within the half-mile requirement. It will be subject of two public hearings, and will required approval by the State Budget Committee, before it is officially established.

The East Chicago presentation was the sixth in a series covering each of the South Shore’s current and future stations. During a meeting Wednesday of the steering committee representing each community in the TDD process, Kowalski said that the proposed districts for the Munster Ridge Road and Munster/Dyer Main Street stations have been finalized below the 320-acre threshold, the Portage/Ogden Dunes station has “one more round of tweaks,” and discussions to revise the Gary Miller station TDD are ongoing.

Presentations and other information, along with opportunities to provide comments, are available at the website nwitdd.com.

WATCH NOW: Gallery: The Times Photos of the Week

WATCH NOW: The Times photos of the week

U.S. Steel has entered an agreement to sell its freight rail subsidiary, Transtar, which operates six railroads including the Gary Railway Co.…

Strack & Van Til has been bringing back self-checkout lanes

Drive-in restaurants revving up for another busy season

Throwback 1950s-style drive-ins surged in popularity during the coronavirus pandemic, giving people a chance to eat out while still social distancing. The momentum is expected to continue this summer.

Mauser Packaging is expanding its sustainable packaging business in Valparaiso.

The auction on the debt for Southlake Mall in Hobart has been delayed a second time as its future ownership hangs in the balance.

Chicago Assembly Plant to shut down again over semiconductor shortage, laying off thousands

Ford will again shut down the Chicago Assembly Plant and lay off thousands of workers because of the worldwide semiconductor shortage that's greatly disrupted automaking.

Sammy Hagar to headline Festival of the Lakes

Sammy Hagar, the Red Rocker and Van Halen singer who can't drive 55, will headline Festival of the Lakes in Hammond this year.