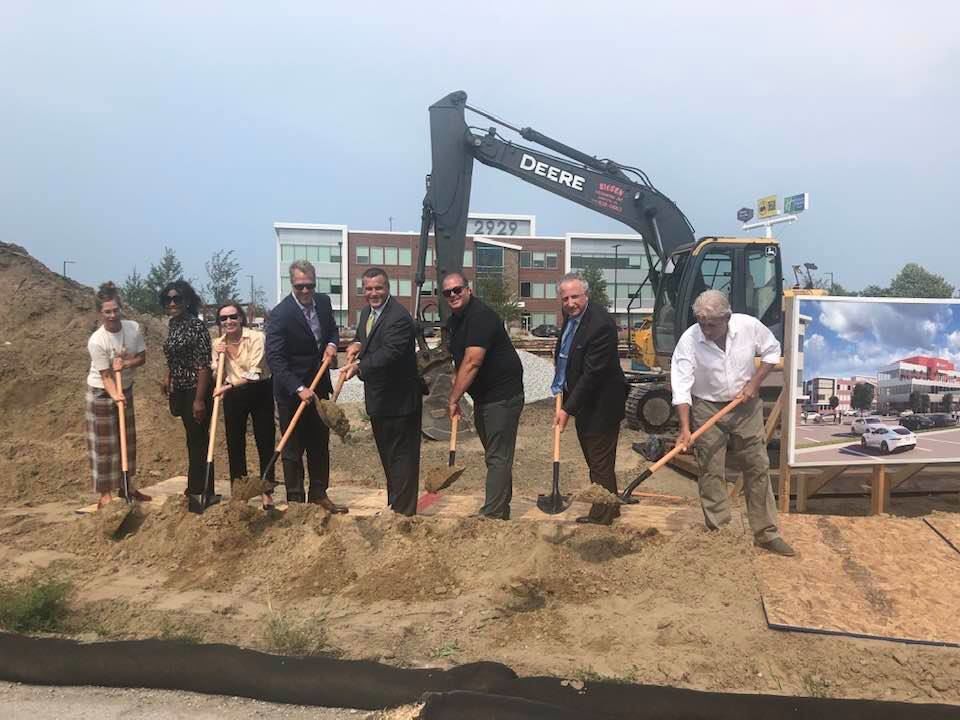 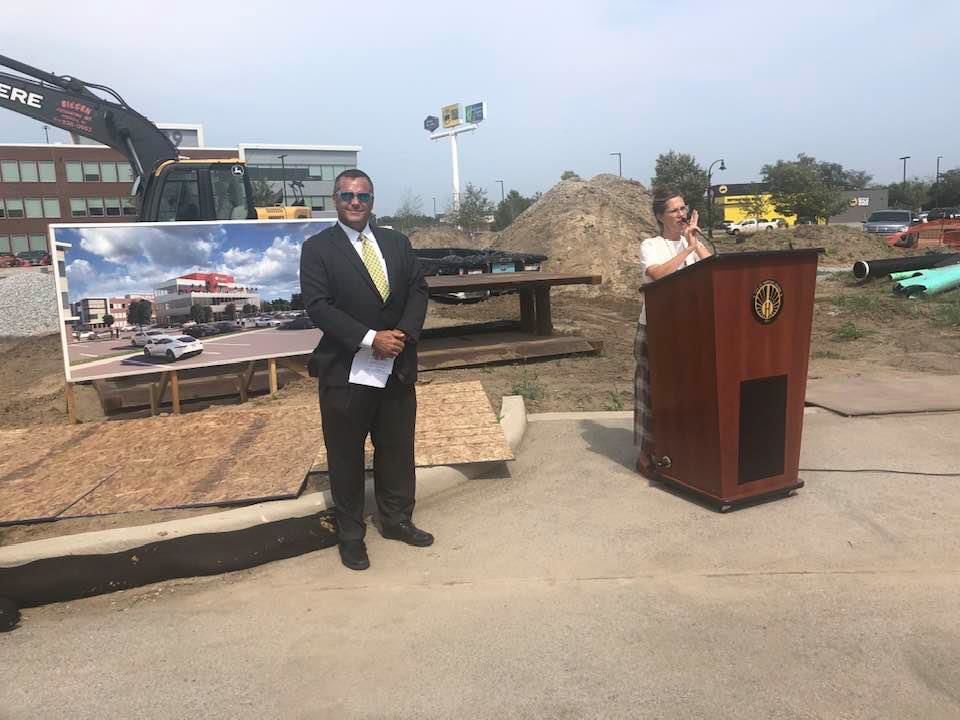 Hammond Mayor Thomas McDermott Jr. and Director of Economic Development Anne Anderson speak at the groundbreaking of the final office building in the Oxbow Landing Development.

HAMMOND — When Mayor Thomas McDermott Jr. sent his son Chase off to law school, he assumed like many college graduates he'd end up taking a job somewhere far from home.

Instead, his son now works in a new office tower the mayor helped pave the way for nearly two decades ago, when the city bought and tore down the River Park Apartments on an oxbow of the Little Calumet River, clearing the way for the Oxbow Landing development that now includes offices, hotels, Byway Brewing and a Buffalo Wild Wings.

On Tuesday, the city and ATG Real Estate Development broke ground on Oxbow Landing's final multimillion-dollar, three-story office building at 2911 Carlson Drive. The 14,000-square-foot building will be occupied by an expanding Impact Networking and clear the way for an Oak Brook-based energy firm to relocate its corporate headquarters from Illinois to Hammond.

"River Park Apartments had seen its glory days, and its glory days had come and gone," McDermott said. "I made a promise to the voters then and it really resonated. I told them if I became mayor we would redevelop River Park Apartments. I'm going to buy it, we're going to demolish the buildings and I'm going to put a commercial development there. I had no idea how much that would resonate in our community. It was a problem in our community. It was a problem in Highland, our neighboring community. It was taking a lot of our resources. We had police and fire here constantly. We bought it and, after some lawsuits and $20 million, demolished the buildings. When I come here 18 years later, I come back and know this place is worth three times what it was as River Park Apartments."

The new development, at the southeast corner of the Kennedy Avenue interchange of the Borman Expressway, has added millions of dollars of assessed valuation to the city. It helped lead to more development with the ice hockey arena on the north side of the interchange and the Cabela's big-box store just off the Indianapolis Boulevard exit, McDermott said.

"When Eric Gastevich with ATG Real Estate invested in Hammond, there weren't a lot of people who wanted to invest in this part of the city," McDermott said. "People didn't have the confidence. But he took a chance on us and a chance on our city."

The new building will be entirely occupied by Impact Networking, which came to Hammond's Oxbow Landing in 2017 but outgrew its space.

"It's a very good problem to have," CEO Frank Cucco said. "The building will add 30 to 40 jobs, including sales, service, managed IT and cybersecurity."

The space Impact Networking occupied on the east half of the third floor of 2929 Carlson has been leased, when it moves out next summer, to Primary Energy, a company that has four major steel mill clients in Northwest Indiana and will move its headquarters to Hammond.

From businesses moving in to new housing construction, there's a variety of progress around NWI's different counties.

Impact Networking's new three-story office tower will have a terraced roof with a big red cube magnifying the Impact logo to the more than 186,000 vehicles that pass by on the Borman Expressway each day.

Byway's brewer Mark Duchow won gold and silver medals at the recent U.S. Open Beer Championship, which is the world's third biggest craft beer competition with more than 8,000 entries from around the globe.

Hammond Mayor Thomas McDermott Jr. and Director of Economic Development Anne Anderson speak at the groundbreaking of the final office building in the Oxbow Landing Development.