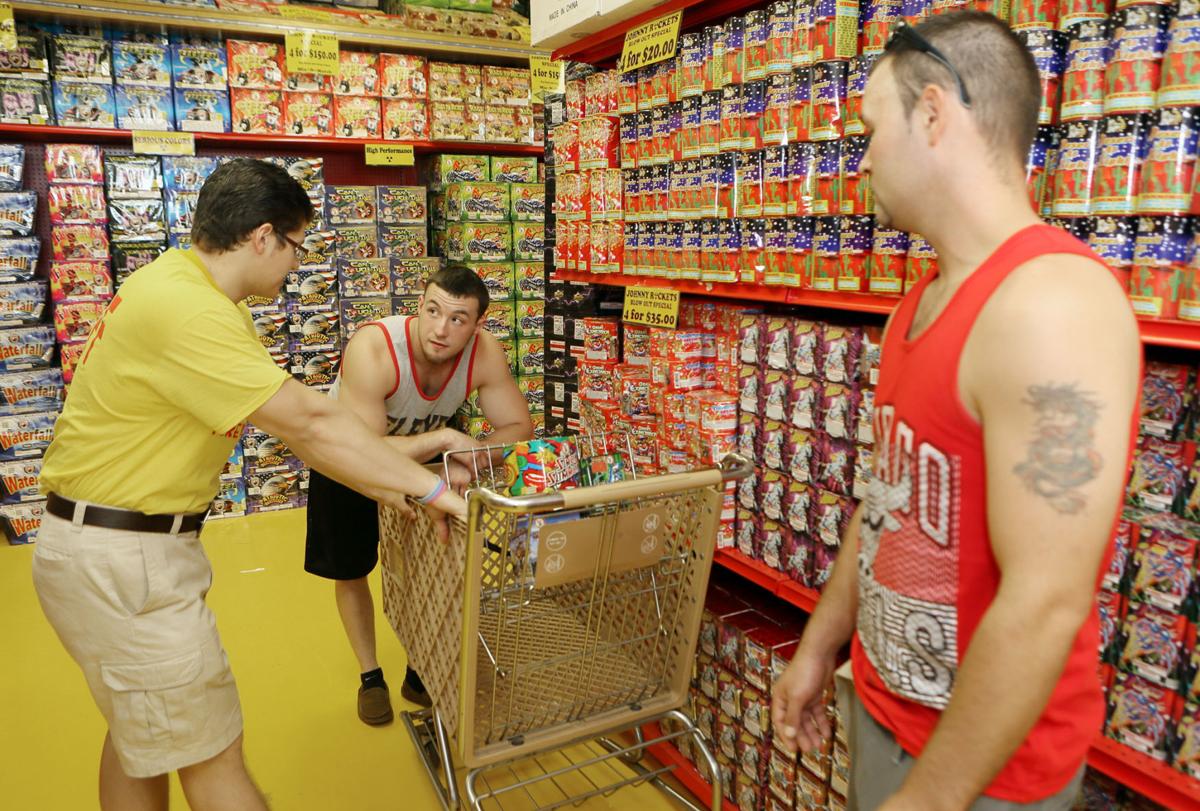 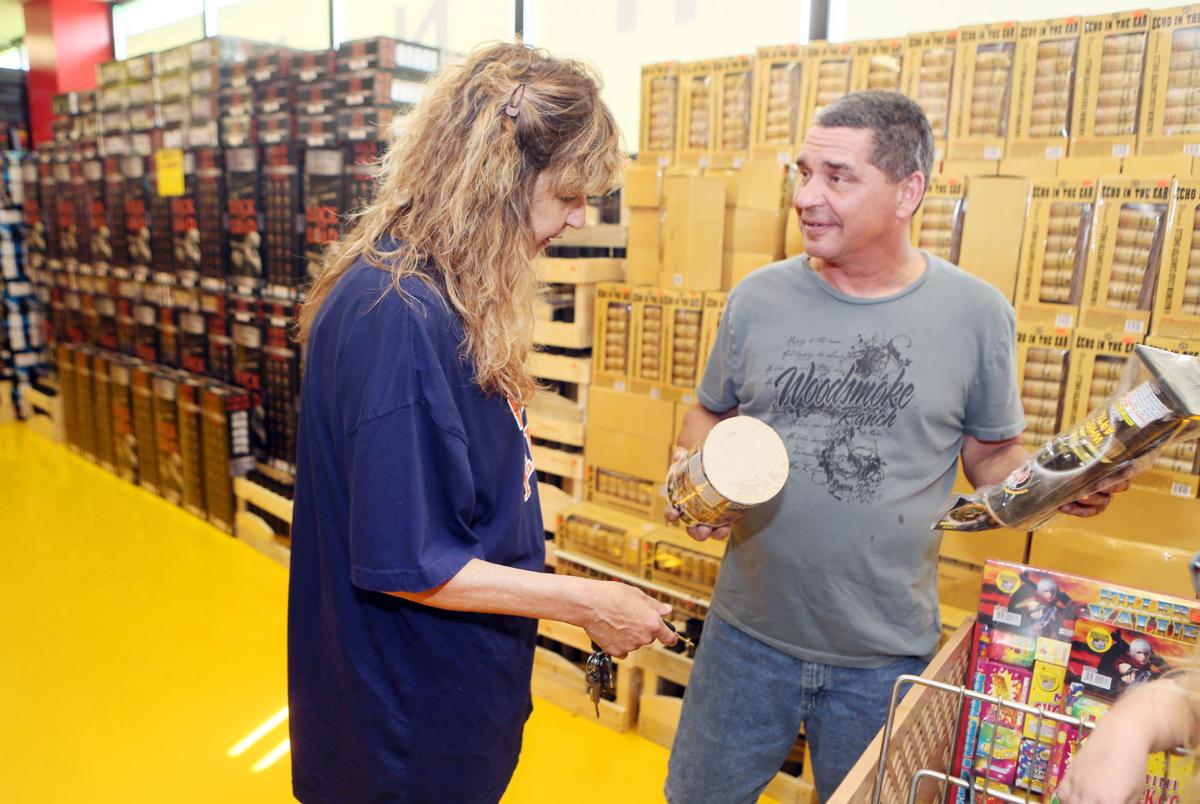 Lelah Eich and Norm Jacobus shop for fireworks at Johnny Rockets in Highland. 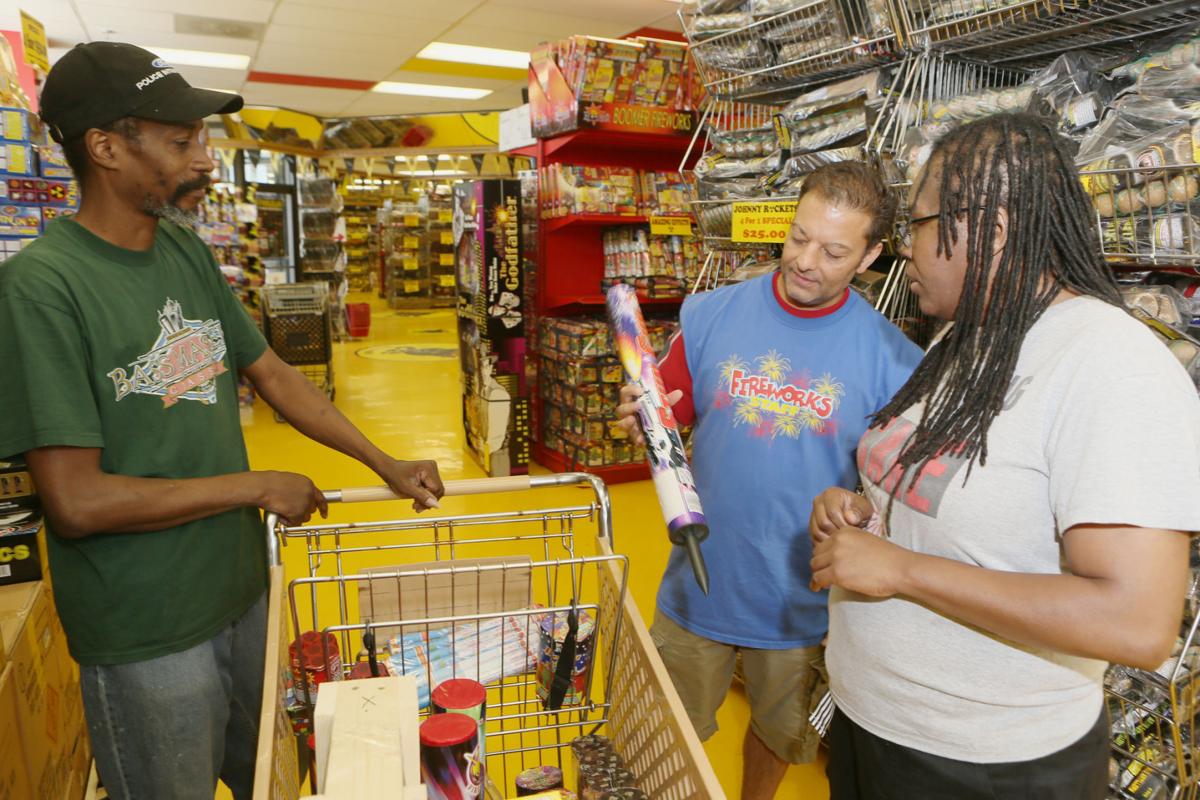 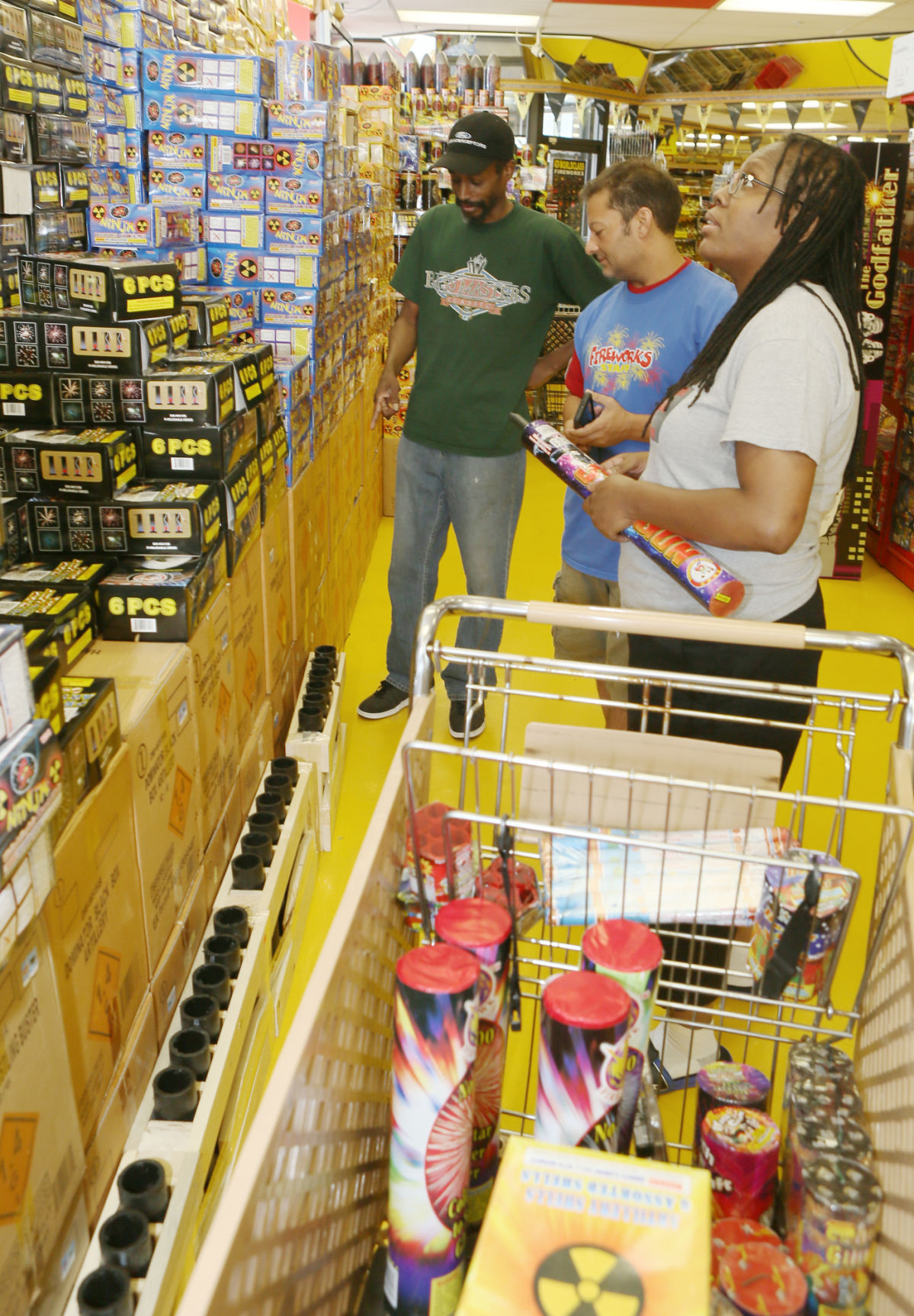 Every summer, you see giant inflatable dinosaurs, billboard after billboard with a straightjacketed man clutching a stick of dynamite, and an explosion of signs promising deals like "buy one, get six free."

As the Fourth of July draws near, cars with Illinois plates suddenly pack parking lots of retail storefronts near the state line that sit empty most of the year.

It's a blast for the Northwest Indiana economy, providing the lift of hundreds of jobs. The unemployment rate in the Gary metro area has fallen from 8.6 percent in January to 6.5 percent because of the surge in seasonal jobs at beaches, marinas, golf courses, pools and the fireworks stands that are ubiquitous along Calumet Avenue in Hammond, U.S. 30 in Dyer, and Indianapolis Boulevard in Highland.

"This increase in business increases employment through the component of unemployment known as 'seasonal unemployment,'" said Micah Pollak, an assistant professor of economics at Indiana University Northwest. "Some other examples of seasonal employment include lifeguards and landscapers in the summer and retail workers around the holidays."

A total of 100 businesses are licensed to sell fireworks in Northwest Indiana, and they're mostly concentrated near the border in Lake County, according to the Indiana Department of Homeland Security. Some stores employ a dozen or more workers.

Neighboring Illinois bans most consumer fireworks, and region store owners estimate anywhere from half to 80 percent of their business comes from the Land of Lincoln.

"While the fireworks season can reduce local unemployment during the summer, we often see an even larger economic boom from what could be called 'fireworks tourism,'" Pollak said. "The third largest city in the United States lies only a few miles from Northwest Indiana, and Illinois is one of a handful of states that imposes strict restrictions on the types of fireworks that can be purchased and set off. The only fireworks that can be legally purchased and set off in Illinois are basic novelty fireworks like sparklers while larger fireworks, even bottle rockets, are not allowed."

Indiana's laxer law can mean a boomlet in revenue for other businesses, since visitors sometimes stop to grab a bite to eat or take advantage of the state's lower sales tax while they're here.

"This 'fireworks tourism' traffic brings in more business for fireworks stores but also for restaurants, other attractions and retail stores in the region and provides a boost in sales tax revenue," Pollak said. "Fireworks stands may get visitors from Illinois 'in the door' to spend time and money at other businesses in the region."

Americans generally can't get enough of blowing stuff up. Consumer fireworks revenue has skyrocketed from $284 million in 1998 to $695 million last year, according to the American Pyrotechnics Association. When display fireworks – the big boys used in fireworks shows – are thrown in, it's grown to a nearly $1 billion-a-year business.

Business flagged during the Great Recession, but people are again snapping up rockets and shells and roman candles, said John Panchisin, owner of Johnny Rockets in Highland.

"Fireworks are booming," he said. "They're becoming legal in more places, and they're extremely safe. They're tested and safe when not mixed with alcohol when lighting them up."

Panchisin opens his store on Indianapolis Boulevard by the Ultra Supermarket for about four to eight weeks around Independence Day. Sales are up about 10 percent this year.

Customers are also spending more on fireworks, though still not as much as they did before the recession, he said. They're now spending an average of $400 or $500, as compared to $100 during the downturn.

"People had been buying lesser products, but no longer," he said. "Now they're looking for big and extravagant fireworks. They're definitely spending more money."

You may have noticed the flashing signs, the hundreds of billboards, the ubiquitous drawing of the straightjacketed Krazy Kaplan clutching a s…

There's always a fireworks shop open at 3 a.m. in the Region

A growing number of Northwest Indiana fireworks shops are open 24/7, at least for the week leading up to the Fourth of July, raising the quest…

July 1 was the busiest day K & D Smoke Shop in Hammond has had all year, said owner Kathy Marks.

A smoke shop in Hobart plans to more than quadruple in size to keep up with demand.

Fireworks sales booming in the Region

Fireworks a major draw to Region

Northwest Indiana fireworks stores have set up dozens of billboards along the highways, inflated Godzillas and King Kongs, and shot aerials in…

A tariff could take some of the bang out of fireworks sales in the Region in future years, potentially making some of the "buy one, get six fr…

For a business that mostly takes place over the course of a few weeks, fireworks are kind of a big deal in the Region.

Summer is in full swing with family-friendly activities for all. County fairs and festivals offer music, children’s activities, food vendors, …

Celebrate the 4th of July with new citizens, music and fireworks

Join the City of Hammond at 6 p.m. Saturday at the Pavilion at Wolf Lake, 2324 Calumet Ave., for the annual Citizen Naturalization Ceremony, f…

Check out this map to view a list of fireworks locations, dates and times around the Region. Are we missing a location? Email Times Digital Pr…

Looking to catch a local fireworks show this weekend? Check out this map!

More people than usual will celebrate this long Independence Day weekend with a holiday getaway, according to AAA Travel. And while motorists …

Fireworks on the Lakefront

Thousands of people packed Indiana Dunes State Park to watch some fireworks and the region's Fourth of July festivities begin.

No longer are fireworks a simple firecracker. Today's fireworks are more creative and safer than before.

Game Day USA has announced that it will bring its youth baseball national championships to the new Sportsplex in Crown Point in 2016.

Handcrafted in the 'Ville market offers wares on Sundays

The Hessville Business Association hosts its Hessville Farmers Market every Sunday in August – rain or shine - from 10 a.m. to 3 p.m. at Hessv…

Sign up your team for the Northwest Indiana Heart Walk

A skateboarding competition will take place at 12:15 p.m. Sunday at Hessville Skate Park near Kennedy Avenue. Grand prizes of $100 will be giv…

Spend an afternoon with Frank Sinatra and Friends

Crossroads chamber to host Meet the Candidates for Merrillville, CP

Skate your way into fall fun in Hammond

Have a hot dog and chili dinner with Kiwanis

The Merrillville Breakfast Kiwanis Club welcomes all to its annual Hot Dog and Chili Dinner fundraiser from 4 to 7 p.m. Oct. 28 at Our Lady of…

Learn about traditions at 'Christmas in Chicago' program

Before you join the Friends of the Crown Point Library’s Chicago Bus Trip on Dec. 3, attend a program about the history of holiday traditions …

Come out to support our veterans at Hammond’s second annual Veteran Appreciation Day parade at 10 a.m. Saturday. The parade route travels from…

Do your gift shopping at Kiwanis' Holiday Boutique

The Merrillville Breakfast Kiwanis hopes you will shop at their Holiday Boutique from 10 a.m. to 3 p.m. Nov. 29 at our Our Lady of Consolation…

Join the latest trend and color your stress away

Adult coloring books filled with intricate, detailed patterns and designs are currently a hot trend in the publishing world. Come to the Crown…

Where to go to celebrate the Fourth of July

Amid reports of fireworks going off day and night in cities across the country, the Region's many fireworks stores report seeing significant spikes in sales.

Lelah Eich and Norm Jacobus shop for fireworks at Johnny Rockets in Highland.