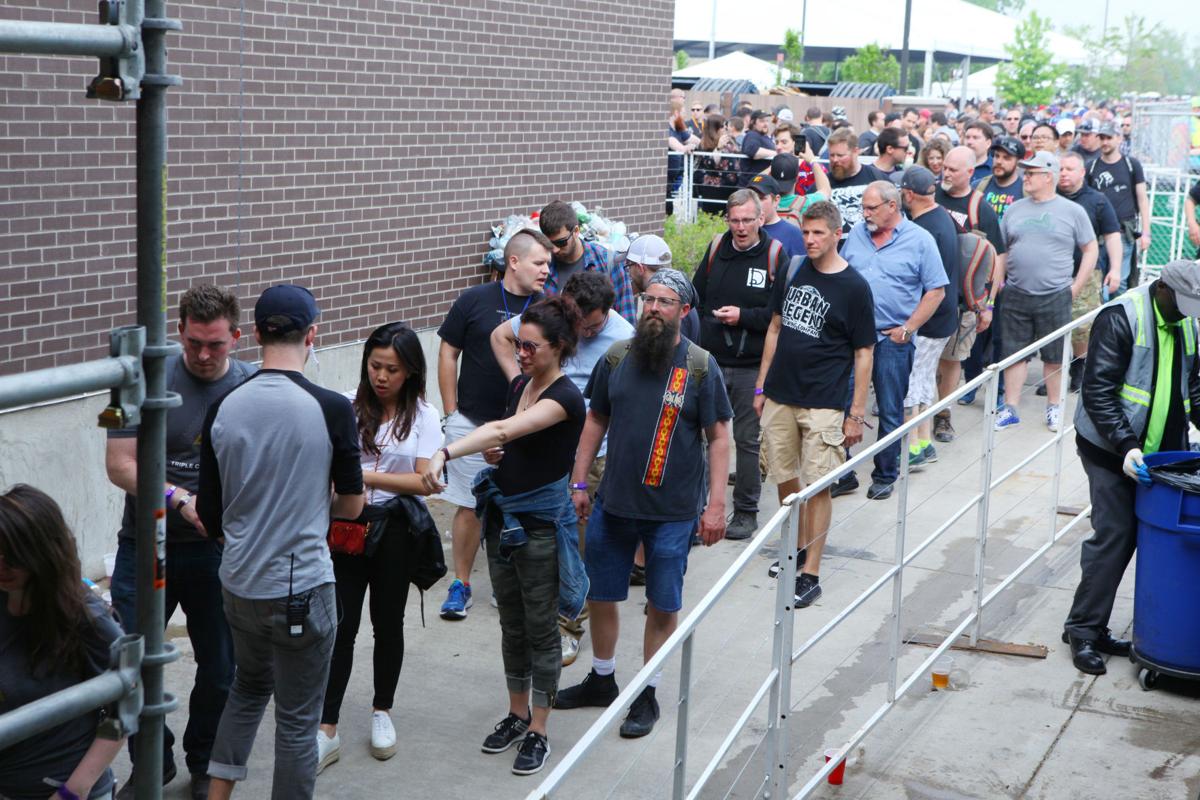 A crowd gathered at Dark Lord Day in May. 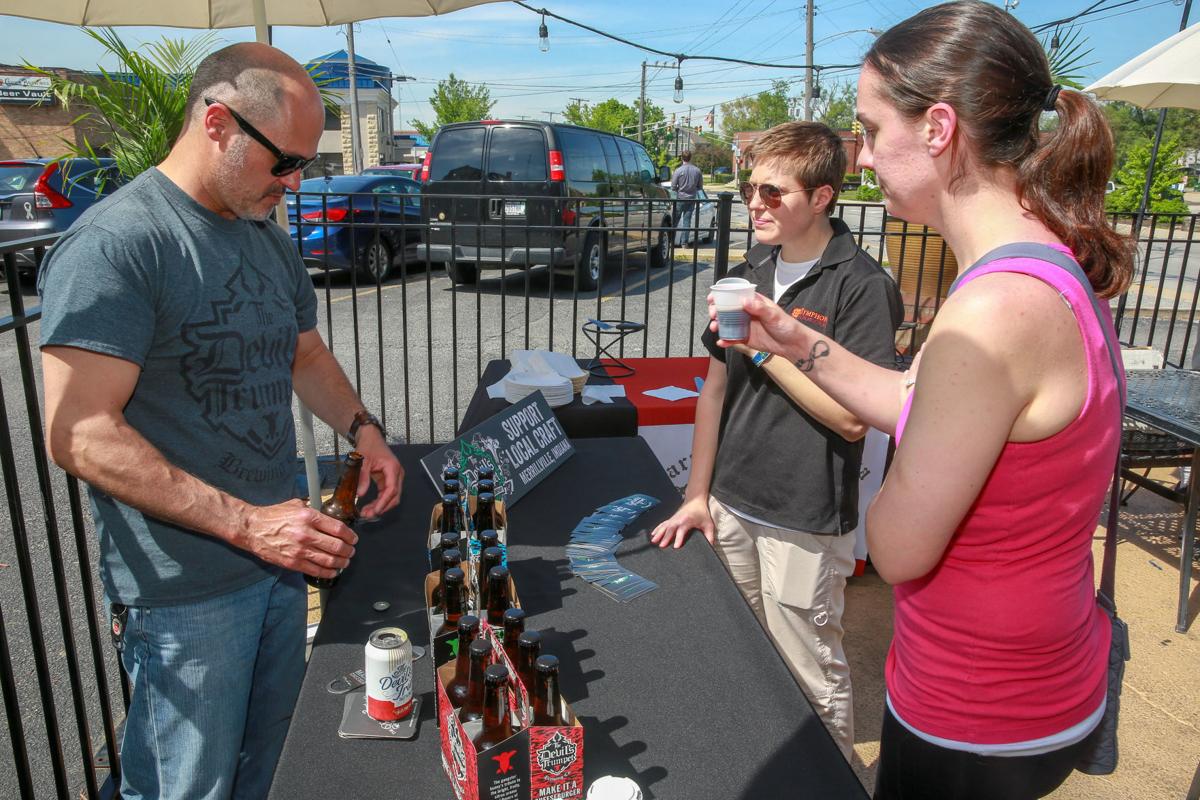 Chris Pearson, left, from The Devil's Trumpet Brewing Co., offers samples to Suzanne Dodson and Ciera Glaser, right, both of Hebron, at the Crown Beer Fest preview in May.

Munster-based 3 Floyds announced that Dark Lord Day will take place on May 18, and Crown Brewing has begun selling tickets for the June 15 Crown Beer Fest.

Dark Lord Day is the only day of the year when one can go to the brewery to buy the widely coveted "demonic Russian-Style Imperial Stout brewed with coffee, Mexican vanilla and Indian sugar."

Dark Lord has been ranked as one of the best beers in the world by RateBeer and often sells for hundreds of dollars on the secondary market.

Tickets will go on sale in the spring for the epic bottle release party, which draws about 9,000 craft beer aficionados from around the country and features a full contingent of heavy metal bands. The massive gathering at the tucked-away industrial park where 3 Floyds is based took place on May 19 this year.

Tickets went on sale Monday for one of the Region's other major craft beer festivals, Crown Beer Fest.

It's the 10th anniversary of the craft beer festival at the Lake County Fairgrounds south of downtown Crown Point. The Crown Beer Fest will take place between 2:30 and 5 p.m. June 15, with VIP entrance at 1:30 p.m.

"There's always a wait list," Crown Brewing owner Dave Bryan said. "We try to get as many local breweries in as possible."

Tickets are $25 for designated drivers, $40 for general admittance and $80 for VIPs. The tickets include a souvenir pint glass and unlimited sampling. VIPs also get in an hour early and get a food ticket and souvenir tote bag as well.

The Crown Beer Fest always sells out its 3,200-person capacity before the event.

"We had no idea when we started 10 years ago that it would grow from 300 people to 3,000," Bryan said. "We're going to celebrate with some special entertainment. I just can't confirm the acts, but they'll be announced soon."

Here's a look at some of the local breweries

The lights, wreaths and other decorations are up, and it's time to start celebrating the holidays with friends and family.

3 Floyds again named one of the world's best breweries

MUNSTER — Raise a glass of Alpha King and hail Munster-based 3 Floyds, which again was named one of the world's top breweries by RateBeer, a p…

3 Floyds has been crafting its award-winning and "not normal" beers for 23 years now.

Every spring, thousands of craft beer lovers from across the world descend on an otherwise sleepy industrial park in the shadow of a municipal…

When 3 Floyds debuted its flagship Alpha King American Pale Ale back in 1996, there were only about 1,000 breweries nationwide, as opposed to …

3 Doors Down to perform at Hammond's Festival of the Lakes

Take a walk around the world to ease your troubled mind, because 3 Doors Down is going to play Hammond’s Festival of the Lakes this year.

The new 3 Floyds Alpha King and Gumballhead cans have been hitting the shelves of retail stores, and are now available for sale to go at the brewpub.

The Crown Beer Fest, one of Northwest Indiana's biggest and most well-established craft beer festivals, will return for the 10th year and tap …

Ironwood Brewing Company is celebrating its sixth anniversary in Valparaiso.

Normally, you shouldn't mix beer and fireworks, but it's a different story when trained professionals are handling the pyrotechnics and one of…

Though of course not as big as 3 Floyds' Dark Lord Day, Devil's Trumpet Brewing Co. in Hobart draws crowds every year when it releases its own…

If you hope to get your hands on some of the most coveted beer in the world, you'll have your chance to buy Dark Lord Day tickets at noon on M…

3 Floyds gets approval from Munster for ‘world-class facility’

After Dark Lord Day this year, 3 Floyds will embark on construction of a major expansion that will more than double its space, submerge its br…

Hunter's Brewing, a nanobrewery in Chesterton that offers an array of traditional and creative craft beers, is making its fifth anniversary br…

Northwest Indiana residents can be proud that one of the world's best breweries is right in their backyard.

MUNSTER — The Dark Lord will reign again this May.

One Trick Pony to open brewpub in downtown Lansing

One Trick Pony to open brewpub in downtown Lansing

One Trick Pony expects to open in downtown Lansing this summer

One Trick Pony plans to complete its long-awaited move to downtown Lansing, which has been brewing for years, this upcoming summer.

A crowd gathered at Dark Lord Day in May.

Chris Pearson, left, from The Devil's Trumpet Brewing Co., offers samples to Suzanne Dodson and Ciera Glaser, right, both of Hebron, at the Crown Beer Fest preview in May.