Hammond, Gary and Northwest Indiana have submitted bids for Amazon's widely coveted second headquarters, which could invest $5 billion and employ up to 50,000 employees making six-figure salaries over the next 15 years.

Hammond, which filed its bid Wednesday morning, pitched the old State Line Generating Plant property on the coast of Lake Michigan as a prospective site. The 77-acre property that borders Chicago city limits was a landmark, Art Deco coal-fired electrical generating station, which burned for 83 years before being shut down in 2012 and demolished.

"Although I think our chance is minuscule, I didn't feel right about passing up an opportunity like this even with a very small chance of success," Mayor Thomas McDermott Jr. said. "It doesn't hurt to try, even though we realize our chances are a long shot."

The state government is backing bids from Northwest Indiana, the Indianapolis area and the Indiana suburbs of Louisville. Hammond, Gary and Northwest Indiana's pitches stress proximity to Chicago, the South Shore Line and local amenities like bike trails.

"It's exciting that Northwest Indiana is presenting itself as worthy for a project like this," Ennis said. "We're continuing to build and continuing to prove ourselves, but we need to dream big. We need to get in the game and tell our story about the Region. Dreaming gets people excited. It's motivating."

Gary took out an ad in the business section of the New York Times last month to grab Amazon Chief Executive Officer Jeff Bezos's attention and launched a Moveon.org petition that more than 1,000 people have signed.

McDermott supports Gary's bid, but said the prospect of 50,000 high-paying corporate jobs was so tantalizing his city had to take a shot. He said Gary's vacant buildings were a potential advantage because it meant a lot of property would be available for redevelopment.

"As you know, I signed on as a supporter for Gary's bid and I truly hope that they are chosen," McDermott said. "They most likely have a better shot than does Hammond as they have the available space that is required under Amazon's RFP to grow, unlike us here in Hammond. We are landlocked in Hammond, which is a good problem to have. This lack of space in order to grow is one of Hammond's biggest liabilities in our RFP response to Amazon. However, we decided to go forward with our RFP response anyway in the hopes that we are chosen with this amazing opportunity."

More than 60 Region leaders, including CEOs, college presidents and union officials, contributed input to a steering committee that refined the Region's proposal. Gary pitched a number of sites, stressing proximity to the Loop, its low cost of business and ample available land.

"We are especially indebted to Economic Development Specialist Mike Citro for shepherding our effort. Now we have to send up prayers that Amazon CEO Jeff Bezos and his team will agree with us that Gary, Indiana will make a great second headquarters for Amazon. ... To have Gary, Indiana enter an international conversation about the next Amazon Headquarters demonstrates potential business assets to Amazon and other potential businesses; this is a win-win for our community."

Region officials said they couldn't pass up a chance to bid on the headquarters, which would ultimately fill 8.1 million square feet with office workers and be considered an equal to Amazon's longtime Seattle headquarters.

“As President of the Gary Common Council, I was pleased to hear Mayor Karen Freeman-Wilson respond to the RFP in regards to Amazon, which is an amazing company we hope will consider coming to Gary, Indiana," Brewer said. "This will give our great city a chance to display the many assets we have available to a Fortune 500 Company. Amazon coming to Gary would mean promising jobs within the region, a bright future for many, and building up a rising city for even more greatness. This is not only a game changer but also a life changing situation waiting to happen. My colleagues and I support this great endeavor 100 percent."

Officials were mum on how much they offered in tax breaks and other incentives to Amazon, which is widely expected to receive record public subsidies for this project. New Jersey, for instance, is reportedly offering $7 billion in incentives.

Hammond Economic Development Director Anne Anderson said the city offered standard incentives for new businesses, such as property tax abatements, facade improvement grants, permit and fee waivers and an allocation area that would funnel tax collections back into the property.

"We would be willing to create new incentives," she said. "We would be very creative with whatever they want to do if there are any ongoing talks."

More than 100 cities across North America, including Chicago, Toronto and Philadelphia, are vying for the new headquarters. Amazon said it would announce its decision sometime next year.

Areas in Chicago's downtown core and suburbs are among possible sites outlined in the city's bid for Amazon's second headquarters.

A biotech company in Gary lined up funding from a Philadelphia-based life sciences investment fund to develop a new breast cancer testing technology.

Small business owners give Indiana A+

'We need to focus on training for the right jobs.' Northwest Indiana expected to add jobs, economic output next year

Northwest Indiana is expected to add a net total of 1,800 jobs next year and increase its gross metropolitan product by about $345 million.

CROWN POINT — While some people may see Gary as a series of vacant lots and abandoned buildings, Joe van Dyk sees those same parcels and struc…

HAMMOND — City officials are seeking to spur economic activity at the far north end of Hammond with the creation of a tax allocation area.

A man died in a house fire early Friday morning in Gary.

Amazon passed on Northwest Indiana as a potential home for its second headquarters, but included Chicago and Indianapolis in the 20 finalists …

Gary, Hammond and greater Northwest Indiana were among the 218 communities eliminated from the running for a second Amazon headquarters that w…

Indiana women may not see equal pay until 2082, according to study

Women in Indiana make 72 cents to the dollar that Hoosier men do on average, and they won't see equal pay until 2082 if current trends continu…

Gary's 108-year-old Union Station, a Beaux-Arts beaut designed by architect M.A. Long, could end up occupied again after more than 50 years of…

After HQ2 loss, NWI apparently misses out on another Amazon warehouse

Gary and Hammond both chased the widely coveted Amazon HQ2, a second corporate headquarters for the Seattle-based online retail giant that pro…

A team of more than 60 people, including business leaders, union officials, state lawmakers and politicians from Rensselaer to South Bend, hav…

Like a Powerball jackpot of hundreds of millions of dollars, the tantalizing prospect of landing the Amazon second headquarters could mean 50,…

More than 100 cities across the country are reportedly vying for Amazon's second headquarters, a holy grail of economic development that would…

Retailpocalypse: A look at businesses that are closing in the Region 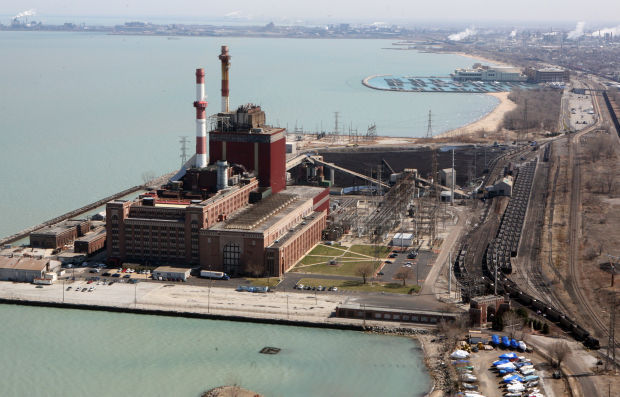 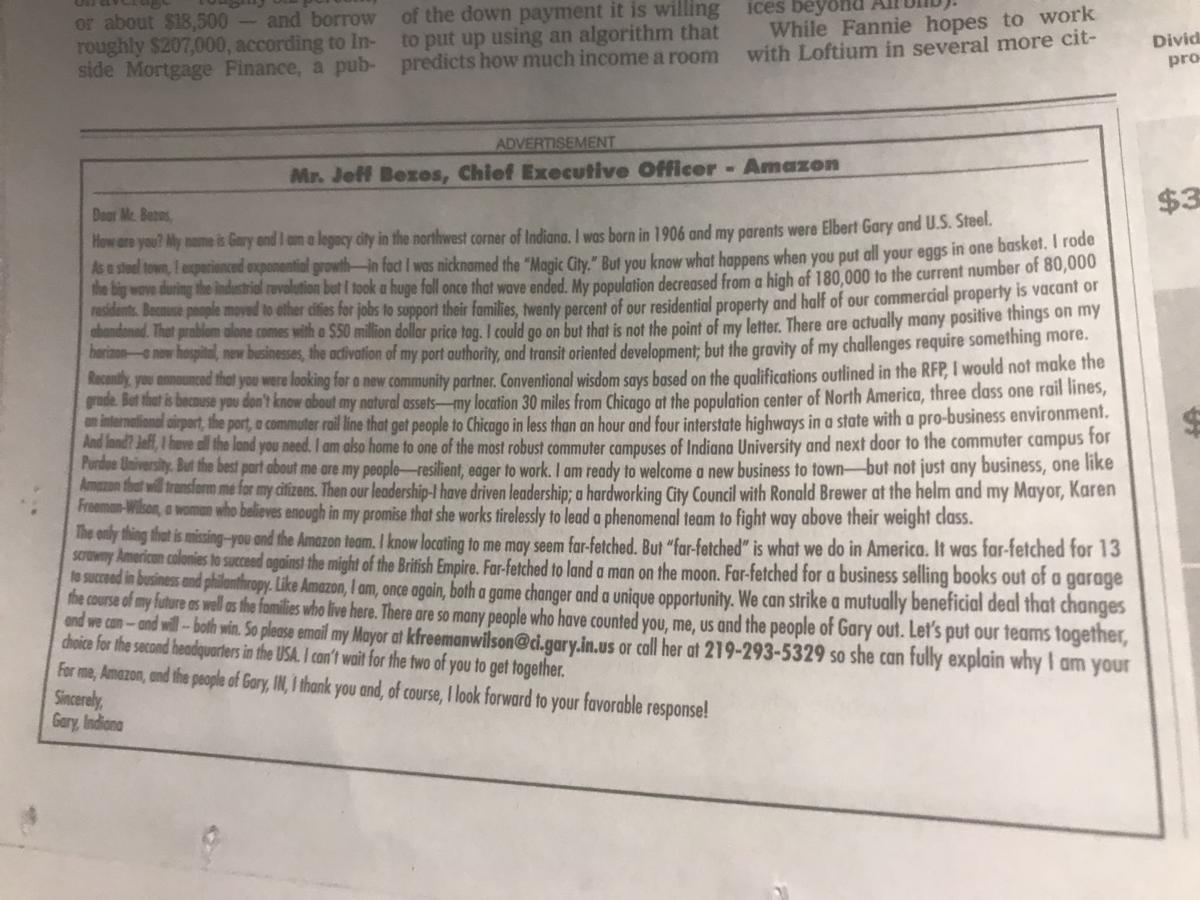 Gary took out an ad in the business section of the New York Times making a bid for Amazon's second quarters, which would bring 50,000 jobs and $5 billion in investment.