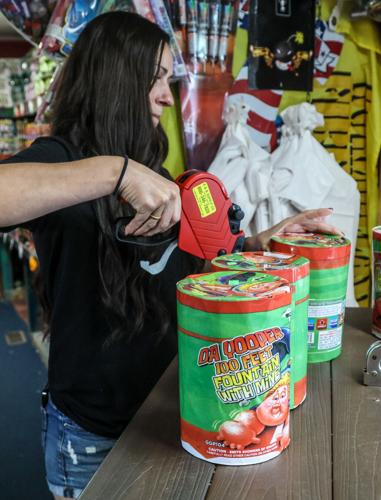 Mary Rendina prices fireworks at House of Fireworks in Dyer. 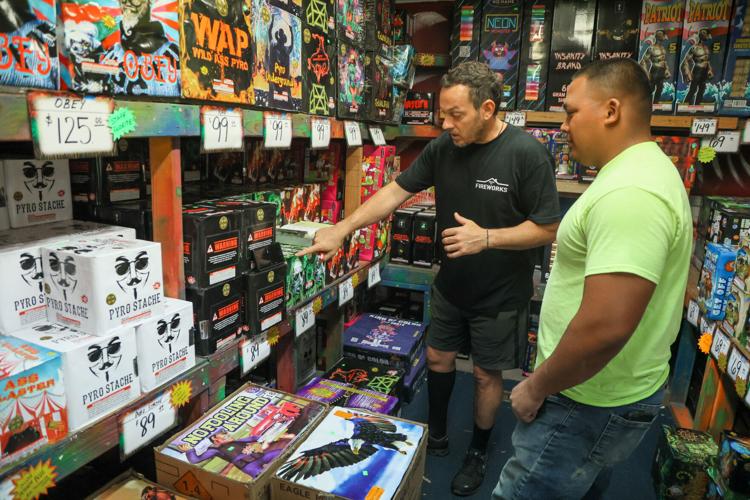 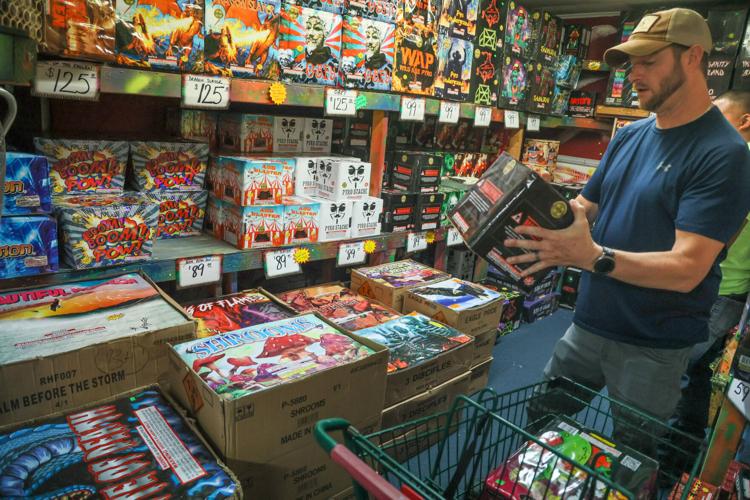 Josh Biancardi, of Crown Point, shops for fireworks at House of Fireworks in Dyer. 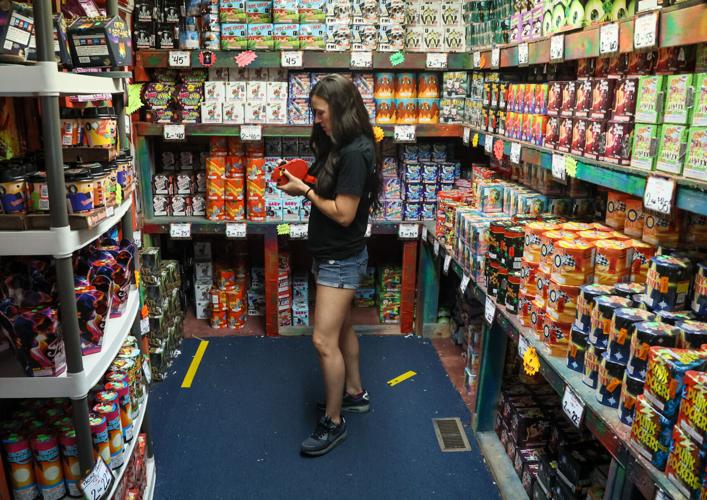 Inflation is up. Gas prices are at all-time highs. Shipping woes have plagued the ports and rail yards.

Fireworks manufacturers from China have not sent everything stores ordered, and the orders have not always arrived on time.

But people are still grabbing rockets, artillery shells and other aerials by the box and calling up local fireworks stores at 12:45 a.m., asking if they stock dynamite.

Recent economic travails haven't extinguished business at Northwest Indiana's many fireworks stores, which continue to draw customers from out of state as people stock up to celebrate the Fourth of July holiday with a bang.

With consumer fireworks banned in neighboring Illinois, Northwest Indiana is a popular destination for fireworks stores. It's hard to miss.

Krazy Kaplan's alone has about a dozen billboards in a row on southbound Interstate 94 as drivers approach the state line, greeting visitors to Indiana with its signature mascot of a bug-eyed man in a straightjacket and an American flag top hat clutching a lit stick of dynamite.

The Indiana Department of Homeland Security estimates more than 100 retailers in Northwest Indiana sell fireworks. Many are clustered along the state line, especially in Hammond and Dyer.

"It's been pretty steady," said Rob Galouzis with House of Fireworks on U.S. 30 near the Illinois state line. "May was a little bit slower until the weather broke."

House of Fireworks continues to attract regulars, many of whom come from Chicago and other spots in Illinois.

He's expecting a good year because the Fourth of July falls on a Monday this year.

"Right now it's the calm before the storm," he said. "Friday, Saturday and Sunday it's going to be nonstop. When it falls on a Monday, the weekend's going to be hectic. It's going to come like a hurricane."

While the store sells an increased number of fireworks for New Year's Day, Diwali and Juneteenth, Independence Day remains the big annual draw for the Region's fireworks stands.

"Inflation and higher gas prices will reduce fireworks tourism in Northwest Indiana to some extent, but probably not drastically so," Indiana University Northwest Associate Professor of Economics Micah Pollak said. "The rising price of goods has decreased disposable income for many households; in response they may limit their travel and reduce spending on less essential goods, such as fireworks.

"Annually, fireworks tourism reflects a relatively small but welcome economic shot in the arm for Northwest Indiana during summer months, a shot that this year will likely have a smaller dose."

Last year, consumer fireworks sales totaled a record $2.2 billion nationwide, up from $1.9 billion the previous year, according to the American Pyrotechnic Association.

Business has remained stable this year, said Ricochet Chandler, who owns the Willy Works fireworks and CBD store in Crown Point along with his father Willy Chandler.

"Gas prices have put a dent in people's pockets. But people are still spending as much as they did last year," he said. "We have Willy Bucks that give them 20% off. If they spend $1 million, we give them $200,000 in free fireworks and shut down the store for the year."

That money doesn't necessarily go as far, as many fireworks stores have been forced to raise their prices.

While most of the bigger fireworks people covet remain in stock, smaller novelty items like Friendship Pagodas are harder to come by.

"We don't have as many sparklers as we'd like," he said. "There are probably five or six items we don't have."

Chandler believes business will end up being able level with record sales last year, thanks to Independence Day falling on a Monday.

"It's a four-day weekend," he said. "People are getting off work, partying, stocking up and ready to rock on the Fourth of July. It definitely makes a big difference what day it falls on."

Whether Independence Day expands the weekend instead of falls in the middle of the week is typically the biggest determinant of sales, said Marilyn O'Connor, the owner of Boom Town Fireworks in Dyer.

"It's not my first rodeo," she said. "A lot of our customers are blue-collar guys who like hunting, fishing, drinking and driving their F-150s. But they have to go to work the next day and can't do that if it's in the middle of the week.

"Even with gas prices, interest rates and the bumps in the road that may mean a recession, people still buy fireworks in bad times. They have marriages, jobs and kids and want to have fun in the backyard and forget all that responsibility. Indiana boys know how to party and have a good time."

Customers have been choosier about what they're buying because of inflation and gas prices, she said. They're less likely to just randomly stuff fireworks in their baskets and carts and more likely to seek out the good stuff to try to get more bang for their buck.

"I call them picky pyros," she said. "They're picking quality and hard-to-find items like never-before-seen Vibranium shells and Halo shells."

With gas hovering around $5 a gallon and many people driving half an hour or more to buy fireworks, they're also calling ahead to make what they want is in stock, O'Connor said. They're less likely to visit several different stores to find what they're looking for.

"They want to make sure you're not sold out of what they want," she said. "They don't want to drive from store to store to store. They want one that has everything under the sun."

Boom Town Fireworks draws customers from Chicago, Michigan and even Milwaukee. One stopped in from Colorado the other day. It gets at least half its customers from Illinois, often from Orland Park, Frankfort and other south suburbs.

"Most of our shoppers are repeat shoppers who come back year after year," she said. "When they cancelled all the fireworks shows, that led to a lot of new shoppers who had never blown up fireworks before. On Saturdays before the Fourth, I feel like half the town of Dyer is in here. It's a party. People are going to stay closer to home because of gas prices but you can still shoot fireworks off in the street. Fireworks are fun. It's a lot cheaper than Disney."

But they have been plagued with supply-chain issues, including manufacturers who can't fill all the orders, delays at ports in California and further delays in rail yards in Chicago. O'Connor ordered eight months early and paid upfront in cash to ensure she'd end up with the inventory needed to satisfy the Fourth of July rush.

But she doesn't always have everything customers are seeking.

"You'd be surprised how many men call in the middle of the night," she said. "One called at 12:45 a.m. asking if I sold dynamite. Not firecrackers, dynamite. It's crazy. I told him you need a whole other license for that type of explosive. Calls like that are sometimes fun to answer."

Indiana Botanic Gardens, an herb and supplement company with roots more than a century old in Northwest Indiana, is developing Listerine Strip-like dissolvable strips as a new way of administering its vitamins and other nutrition supplements.

Lakshmi Mittal created the world's largest steelmaker that at one point single-handedly produced a tenth of the world's steel. He founded ArcelorMittal, a multinational giant with customers in 160 countries that long ran Northwest Indiana's mills.

Former Gander Mountain at Southlake Mall will become an Airsoft arena with axe throwing, photo ops and live bands that will double as an active shooter training site for local businesses. The Santa's Winter Wonderland pop-up will return there in December.

Mary Rendina prices fireworks at House of Fireworks in Dyer.

Josh Biancardi, of Crown Point, shops for fireworks at House of Fireworks in Dyer.