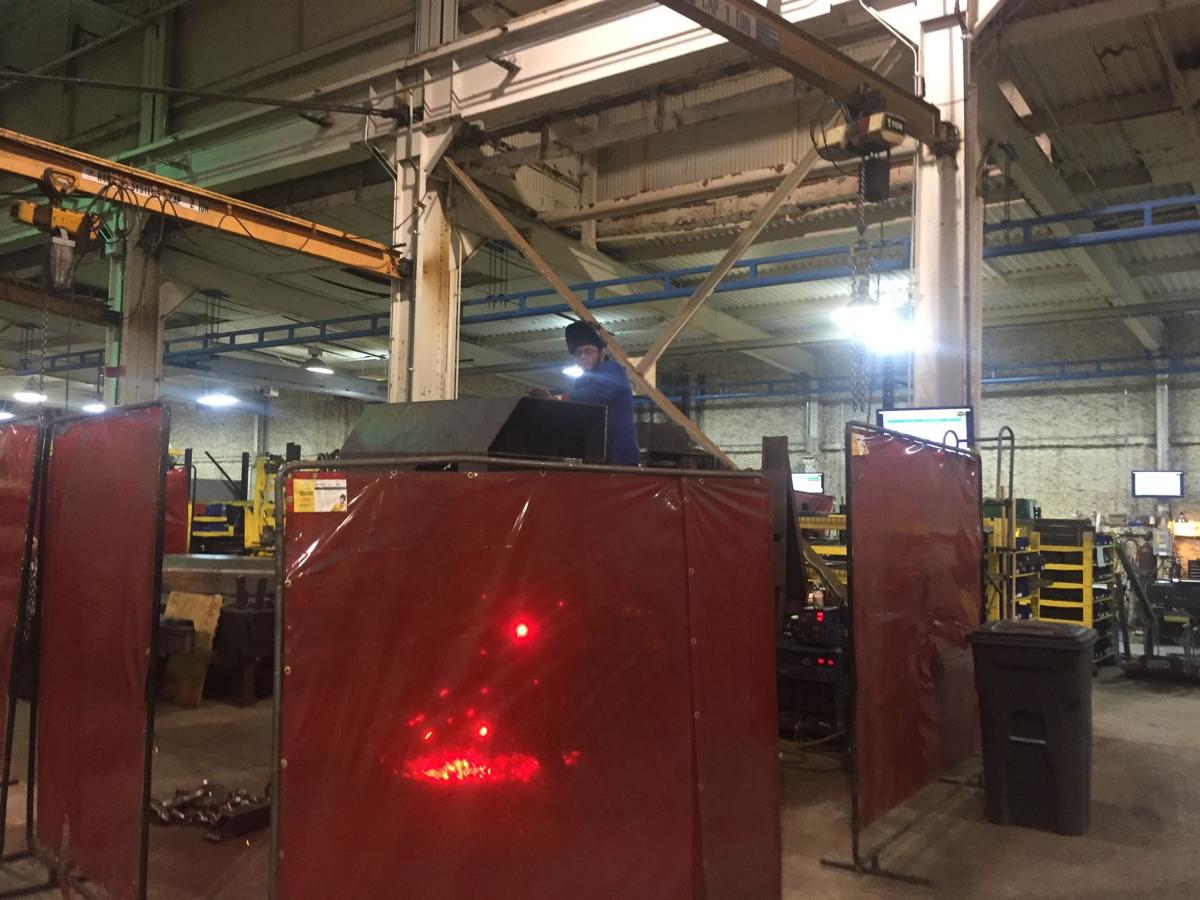 A welder welds at the new Hoist Liftruck factory in East Chicago in March. 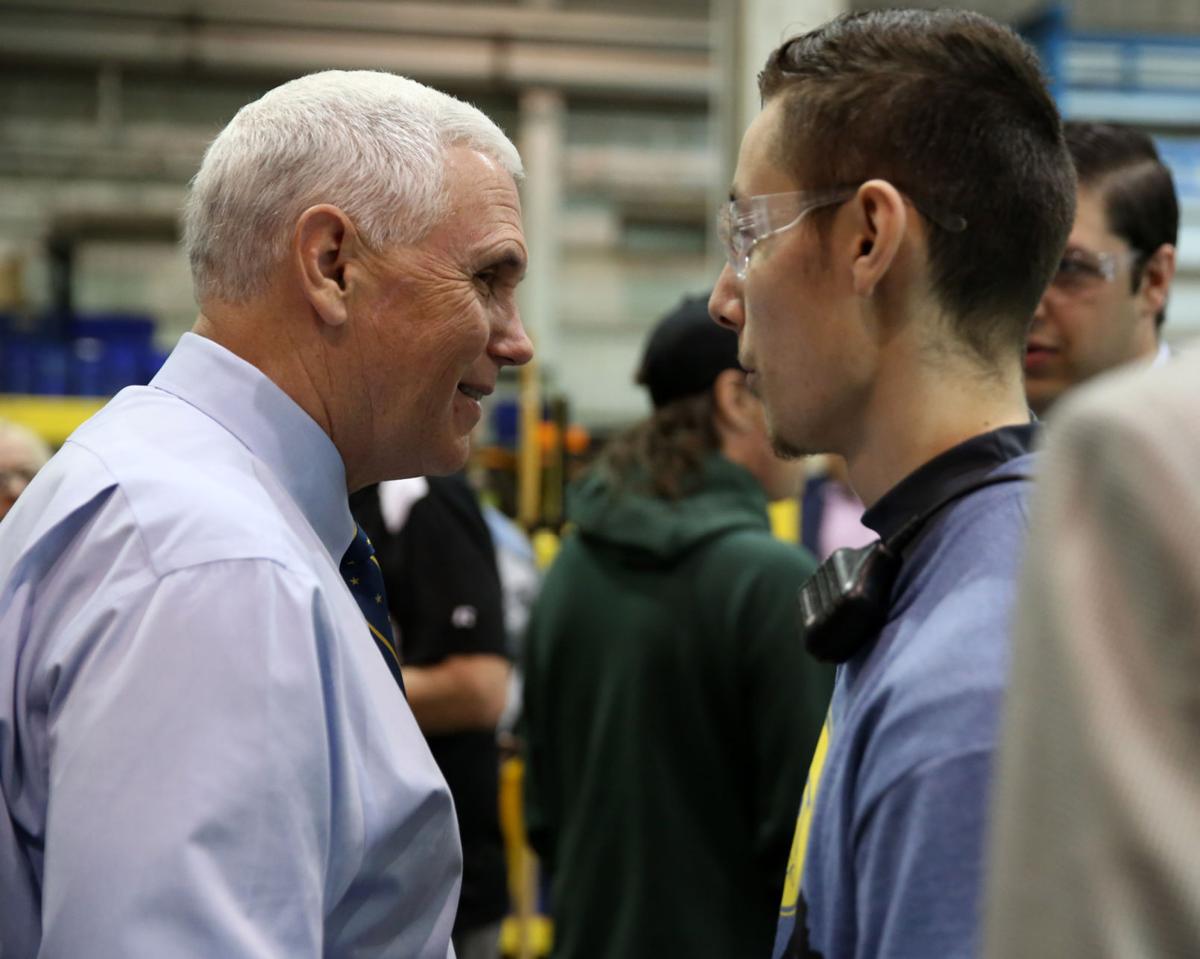 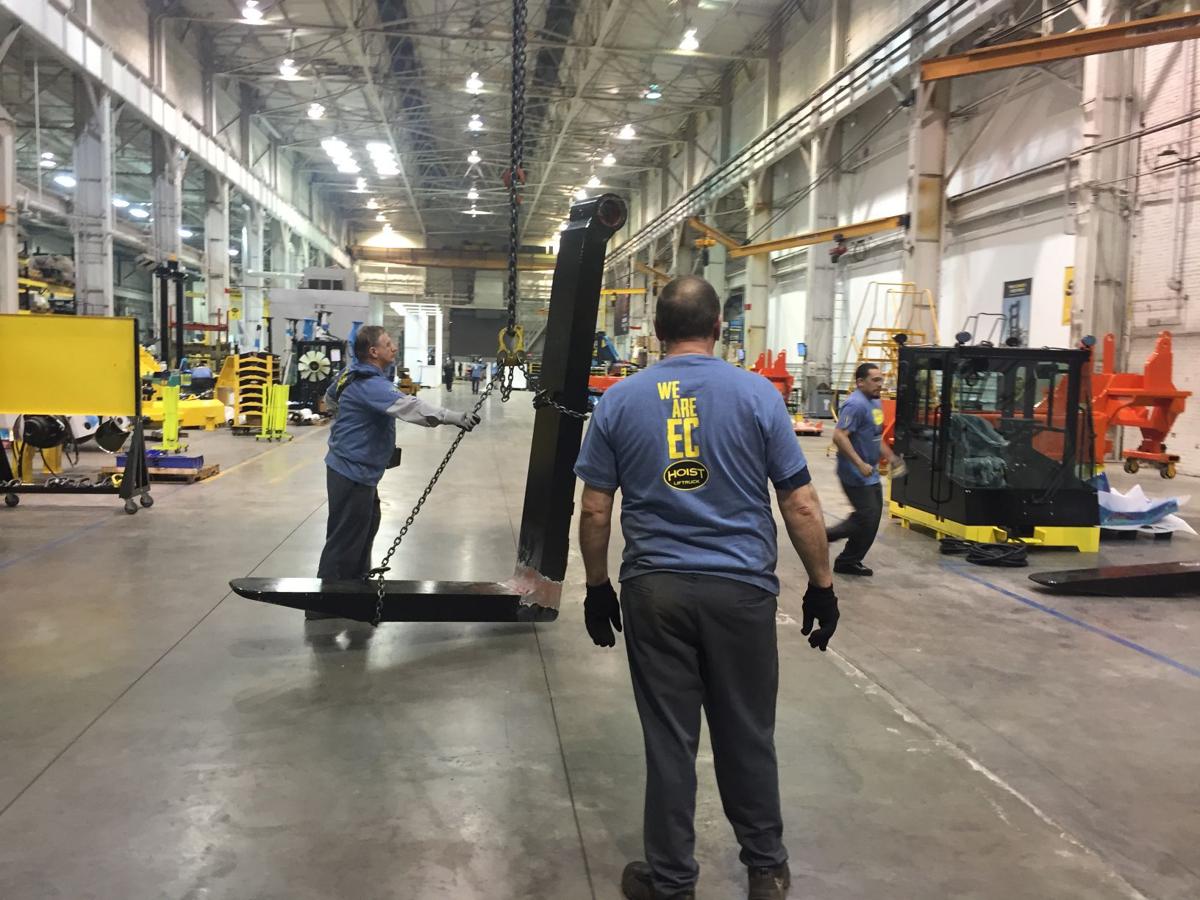 Workers at Hoist Liftruck's new factory in East Chicago use a crane to move a forklift fork in March. Hoist's recent move to the city helped spur a developer to build the 320,000-square-foot Park 145 business park in the city.

Forklift-maker Hoist Liftruck is bringing some much-needed jobs to a Region city of 29,000 that had the highest unemployment rate of any city in Indiana at 9.8 percent in April, and which has consistently had one of the highest jobless rates in the state.

The nearly century-old company, which makes reach stackers, container handlers and pneumatic forklifts that can lift as much as 57 tons, expects to employ as many as 500 workers at its new East Chicago factory by 2022.

Hoist Liftruck has hired about 125 employees since transferring manufacturing operations to the new East Chicago plant from Bedford Park, Illinois, with most of those hires coming from Northwest Indiana, said Vince Flaska, new business development and property manager.

"We get a few dozen resumes from welders a day in East Chicago, when we got maybe one a week in Bedford Park," he said.

"The demographics are different. We got one candidate at Bedford Park who welded over his hand during the welding test. In Indiana, there's no shortage of people with the skills and the experience we need. We often hear 'I ran that machine at my old job.'"

The company employed as few as 70 workers during the Great Recession at its Illinois plant, but business has been booming, especially after it signed a deal to make forklifts for market leader Toyota in North America and eventually all over the world.

Hoist Liftruck brought about 225 employees from its Bedford Park headquarters plant when it moved its manufacturing operations to East Chicago's Blaw-Knox tank factory at 4407 Railroad Ave., where it has invested $40 million.

Flaska said all but about 10 percent of the employees decided to come along to work in the Northwest Indiana city about 30 miles from Chicago's west suburbs.

The company has been hiring as it ramps up in East Chicago, where it now employs about 350, to meet increased demand for its massive forklifts used at steel mills and other industrial sites.

“It’s given people in E.C. the opportunity to have good jobs,” East Chicago resident Michael Henning told ECTV when he landed a construction job there during the build-out last year. “Before that, we didn’t really have none in the city.”

Instead, training programs were set up through East Chicago Central High School and Ivy Tech Community College that prepare East Chicago residents for jobs at the company.

“The mayor wanted citizens to be considered for positions there, but you can’t mandate or set targets to where they come from,” she said. “We did work with Ivy Tech and the high school to ensure a pipeline of skilled local workers.”

At least a dozen Hoist Liftruck employees already have moved from Chicago’s West Side or South Side to East Chicago or neighboring Hammond, Flaska said. They’ve come to take advantage of East Chicago’s $10,000 to $30,000 incentives for buying homes, Hammond’s College Bound program, Indiana’s overall lower cost of living, and a shorter commute.

“Many of these people are living in Chicago,” Flaska said.

“They’re White Sox fans. They’re Bulls fans. They love Chicago. But they're seeing they’re saving so much money on gas and cigarettes. Then they look at the home prices, and find they’d save a lot more. They learn about the South Shore Line and discover they’re not 100 miles away from Chicago. They’re 30 minutes from the Loop.”

“They’re White Sox fans. They’re Bulls fans. They love Chicago. But they're seeing they’re saving so much money on gas and cigarettes. Then they look at the home prices, and find they’d save a lot more. They learn about the South Shore Line and discover they’re not 100 miles away from Chicago. They’re 30 minutes from the Loop.” --

Steel shipments remained essentially unbudged in April as the American steel industry tries to recover from one of the worst import crises on record.

Unemployment fell by 0.2 percent in both Indiana and Illinois in May, though Indiana’s labor force grew while Illinois’ shrunk.

New US citizens sworn in on Fourth of July

HAMMOND – Martin Da Costa, a Munster resident with advanced degrees who works in the field of education management, had been an undocumented i…

Indiana’s unemployment rate fell 0.2 percent to 4.8 percent in June, the first time it’s been below the national average since February.

US employers advertised more jobs and boosted hiring in June

WASHINGTON — U.S. employers advertised more openings and hired more people in June, adding to evidence that the job market has rebounded from …

Buying American could create 400 jobs in Indiana, but will the feds do it?

A local manufacturer is gunning for a defense contract it says would result in up to 400 jobs over the next decade in East Chicago.

Developers eyeing an e-commerce distribution center that could bring 3,000 jobs to Lake County

Developers are looking at building an e-commerce distribution center that would potentially employ up to 3,000 workers somewhere in Lake Count…

The biggest economic development deal in years for East Chicago, promising 500 jobs, had hit a stumbling block after months of negotiations an…

East Chicago is the 14th best small city in the country to start a small business in, according to the personal finance website WalletHub.

Timeline of the Hoist Liftruck deal

Interact: Hoist Liftruck: A look at the incentives

Here's a look at what Indiana offered Hoist Liftruck to lure it from Bedford Park compared to what Illinois offered.

Here are the holdings of Robert Skaggs Jr., Stephen Smith and Glen Kettering in Columbia as of May 13.

A welder welds at the new Hoist Liftruck factory in East Chicago in March.

Workers at Hoist Liftruck's new factory in East Chicago use a crane to move a forklift fork in March. Hoist's recent move to the city helped spur a developer to build the 320,000-square-foot Park 145 business park in the city.