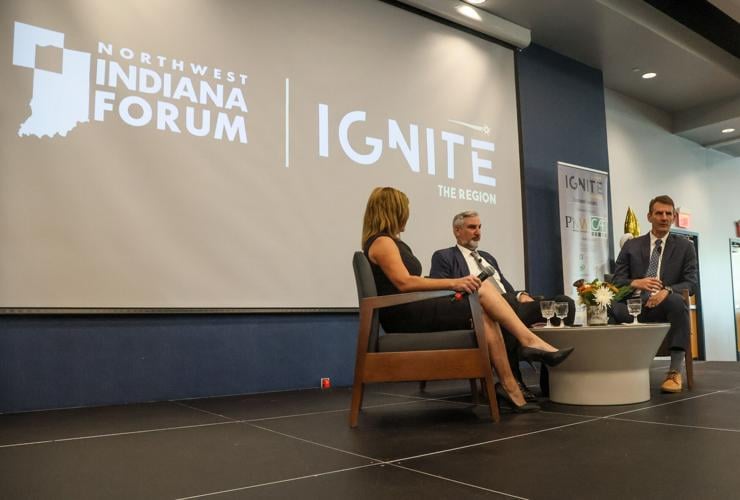 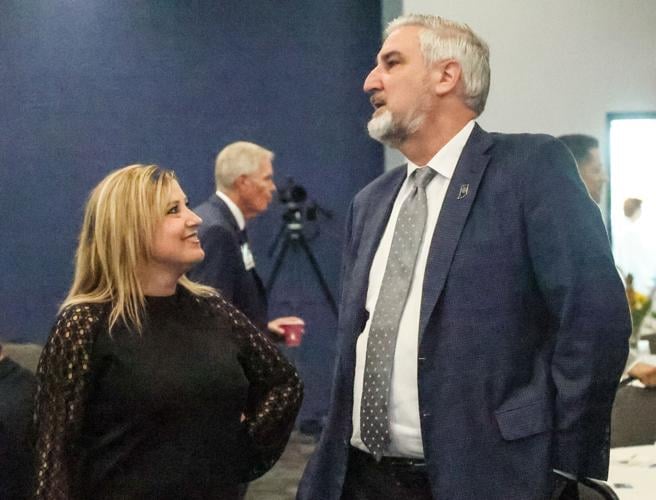 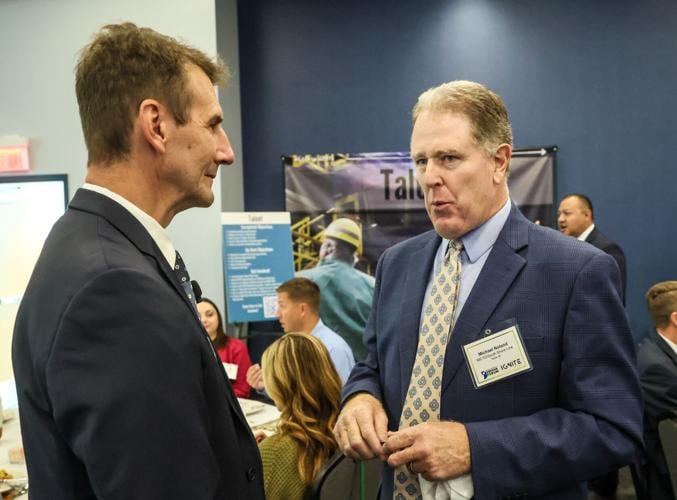 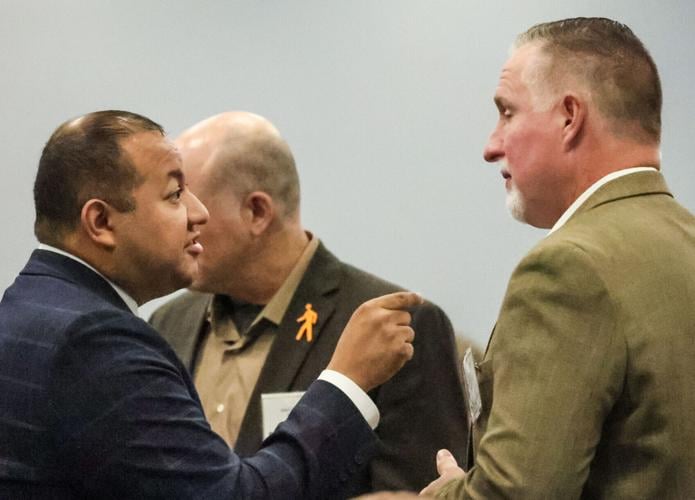 State Rep. Mike Andrade chats with David Uran, president and CEO of the South Shore Convention & Visitors Authority at the Ignite the Region luncheon on Tuesday.

MERRILLVILLE — Gov. Eric Holcomb and U.S. Rep. Frank J. Mrvan, D-Highland, took a victory lap of sorts Tuesday in recognition of their joint efforts to position Northwest Indiana to grow and thrive in the years and decades ahead.

The Republican chief executive and Democratic congressman seemed to be of one mind that recent federally funded state economic development initiatives, including the READI program, are preparing the Region, its municipalities and citizens for the economy of tomorrow.

Holcomb told some 400 corporate and community leaders gathered for lunch at the Dean and Barbara White Community Center that Northwest Indiana's manufacturing legacy, talent pool, university research and development programs, and geographic location near Chicago put it among "very few places on planet Earth" where all those essential economic components are found together.

"As we look at our strengths as a state, and what we're trying to accent, this plays perfectly into our sweet spot, so to speak," Holcomb said.

The governor said Indiana's READI program, which is investing through the Northwest Indiana Forum $50 million from the American Rescue Plan to unlock $550 million in related funding for 34 locally designated job training, infrastructure and quality of place projects, ensures the Region's future remains bright.

"There are 16 other regions in our state that are sleeping with one eye open because of what you're accomplishing here," Holcomb said. "It's really an exciting time."

Mrvan said that outcome is exactly what he had in mind when he voted last year in favor of the American Rescue Plan that was opposed by every Republican representing Indiana in Congress.

"And I just want to thank you, governor, for the approach you took towards it, because I can go back to Washington, D.C. and say: 'Proof positive,'" he added.

Mrvan and Holcomb said similar great things are on tap thanks to the Mrvan-sponsored CHIPS and Science Act, which aims to bring microchip manufacturing back to the United States, and may lead to Northwest Indiana being designated a "tech hub" for additional federal investment in high tech jobs and education programs.

The congressman said shortening the microchip supply chain will ensure American businesses, particularly auto manufacturers, never again have to delay production, cut back on Northwest Indiana steel purchases, or lay off workers because they don't have access to the chips they need.

"I was a township trustee. Whenever anyone is losing a job or not working, it impacts me to my core," Mrvan said. "The manufacturing and education components (of the legislation) will allow us to leap, and retain talent here in Indiana as we manufacture our way back to success."

The 30-minute discussion between Holcomb and Mrvan at the annual "Ignite the Region" celebration was moderated by Heather Ennis, president and CEO of the Northwest Indiana Forum.

She said their bipartisan work on behalf of Northwest Indiana in uncertain and tumultuous times have helped the Region effectively plan for its future, instead of just living hand to mouth and trying to survive.

"There's some pretty cool stuff happening here in Northwest Indiana. This is evidence that we're moving together in partnership like never before," Ennis said.

"I know competition compels us, it's the nature of free enterprise, I get it. But cooperation is really what's going to sustain us. It's what helps us move forward," she added.

"That's for Northwest Indiana to decide. I will say this, we have for years had a good working relationship with our federal partners at large," Holcomb said. "We'll continue to look for ways which we can move this Region forward, and I'll partner with anybody that wants to help me do that."

"He is an honorable man, Congressman Mrvan, and his opponent is, if you look at her life story — it is a very compelling, courageous, ceiling-shattering story that folks would be proud of as well," Holcomb said.

That opponent, Republican Jennifer-Ruth Green, repeatedly has condemned the federal spending initiatives supported by Mrvan and implemented by Holcomb.

"Ensuring mothers get the care they need after giving birth is a core part of our effort to address the nation’s maternal health crisis," said HHS Secretary Xavier Becerra.

It's relatively unusual to see television ads in the 1st Congressional District because Democrats have continuously held the seat for nine decades.

The website — Jennifer-TruthGreen.com — includes a clip of a Green TV interview where she declares, "I'm 100% pro-life — all the way."

"Programs like this are critical in meeting the needs of our community and students who are working to improve their lives through education," said Ivy Tech Chancellor Louie Gonzalez.

U.S. Rep. Tony Cárdenas, D-Calif., put it bluntly — "Democrats are horrible about talking about our victories."

The switch to "toss up" from "lean Democratic" comes after Republican Jennifer-Ruth Green, of Crown Point, reported raising $561,329.50 for her campaign during the April 1-June 30 period.

All registered Indiana voters can find their voting site and request a mail-in ballot, if eligible, by accessing their voter registration record online at IndianaVoters.com.

In an exclusive interview with The Times, Mrvan said neither he, nor anyone affiliated with his campaign, provided Green's military service record to Politico.

The Rev. Tom Bozeman started his new ministry position at the universalist church on Aug. 1.

The Republican seeking to represent Northwest Indiana in Congress was a guest Tuesday night on the top-rated "Hannity" program on the Fox News Channel.

Republicans have poured unprecedented amounts of money into Indiana's 1st Congressional District in the hope of flipping "red" what's long been considered a "blue" stronghold.

The 1st District has been centered on Northwest Indiana since 1932. Mrvan's 5.6% margin of victory is the fifth-closest result during that period, records show.

"We don't need to constrain humanity to save it. Just the opposite. We need to unleash our collaboration, our creativity and our invention," said Gov. Eric Holcomb.

"We must continue to work to ensure that the VA has the tools it needs to effectively protect against new and emerging cybersecurity threats," said U.S. Rep. Frank J. Mrvan, D-Highland.

State Rep. Mike Andrade chats with David Uran, president and CEO of the South Shore Convention & Visitors Authority at the Ignite the Region luncheon on Tuesday.