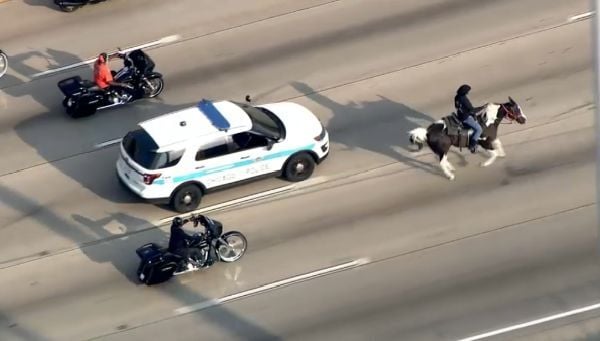 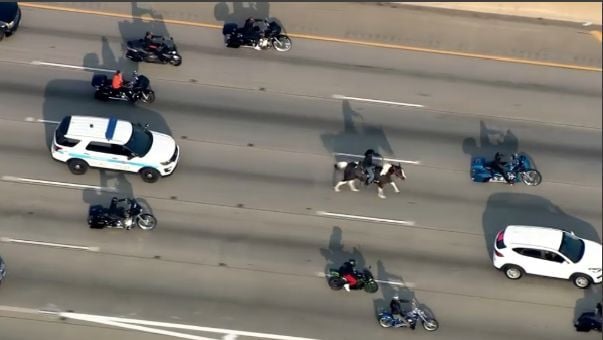 CHICAGO — It was like the Wild West on the outbound Dan Ryan Expressway during rush hour Monday where the surreal scene of a horse galloping down the interstate left puzzled motorists with more equestrians than answers.

A public figure known as the "Dreadhead Cowboy" rode a horse down the middle of the highway for about half an hour, at a speed estimated around 13 mph.

Hollingsworth rode more than seven miles down southbound Interstate 94 in support of his #kidslivesmatter movement, which has sought to end gun violence in the city. He has previously marched his horse around South Side neighborhoods in protest of shootings.

“When you get kids occupied and they’ve got things to do with their time and their life … all this senseless killing that’s going on, it’ll slow down a whole lot,” Hollingsworth told Block Club Chicago at a protest in Woodlawn in August. “It’s important to support dance groups (or) anything that’s got something to do with kids. If it’s something positive, support it.”

Multiple people called 911 to report a horse got on Interstate 94 southbound at 35th Street Monday afternoon. Officers arrived at the scene on 71st Street, where they found the horse and rider in the local lanes while flanked by a protective entourage of motorcycles and cars, many displaying #kidslivesmatter signage.

"Officers asked the subjects to exit the Interstate multiple times and Hollingsworth refused. Due to the safety of the subjects involved, motoring public, and the horse, officers ordered the protesters off the interstate," Illinois State Police said in a press release. "Officers safely escorted the subjects and horse off the Interstate at 95th Street. Hollingsworth was ordered off the horse and placed under arrest for reckless conduct, disobeying a police officer, and criminal trespass to state-supported property without incident."

Troopers found the horse had several injuries, including a bleeding left hoof and sores from the saddle.

Luster then tried to secure the horse and was arrested after being asked repeatedly by officers to release it, according to a press release.

The horse has been taken to Animal Care and Control, where they are taking a look at its condition.

Nick Popovich has piloted a global aviation business that, since its founding in 1979, has repossessed more than 1,800 planes and helicopters, valued at more than $40 billion in aircraft and parts, from locations around the globe.

This is the Illinois State Police's sixth crash in 2021 in which a driver allegedly violated the law by not slowing down and/or moving over when an officer was on the side of the road, police said.

An Illinois State Trooper and a woman were found shot dead in a car in Chicago on Monday.