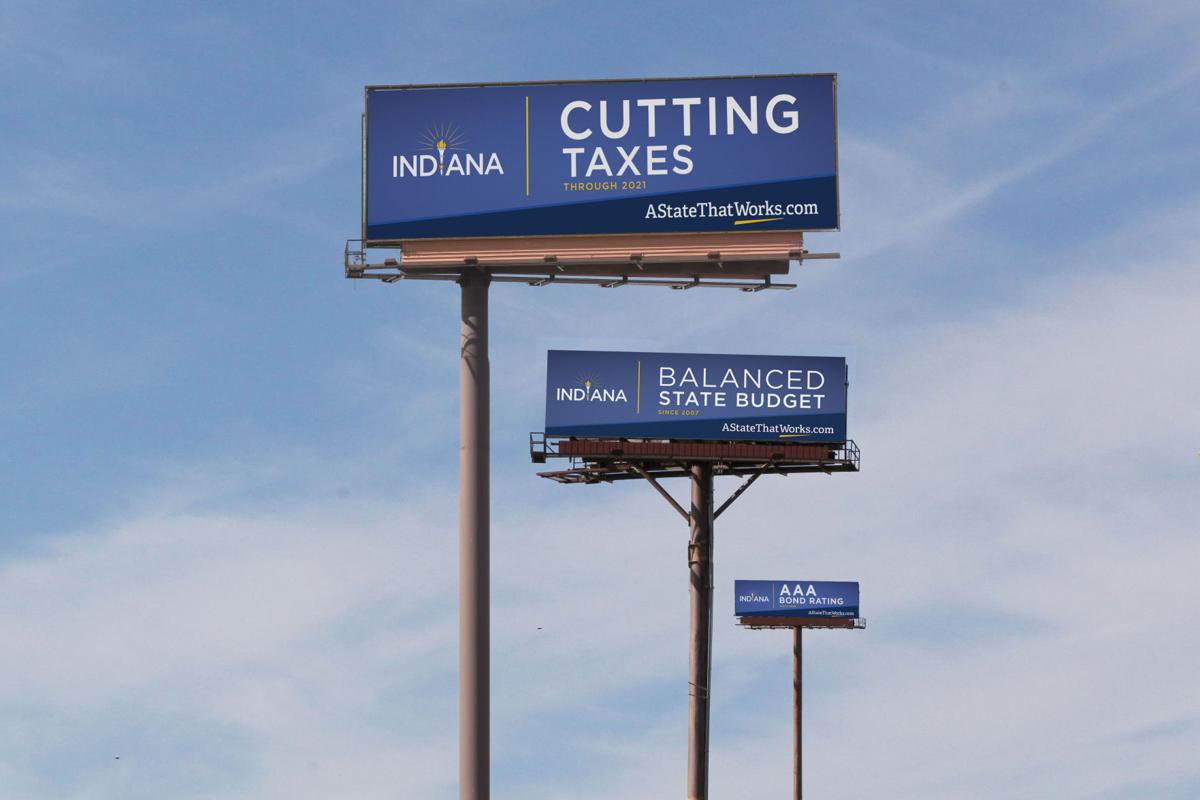 This photo illustration shows the type of billboards the Indiana Economic Development Corp. posts along busy interstates in and out of Illinois in hopes of luring companies across the border to the Hoosier state. 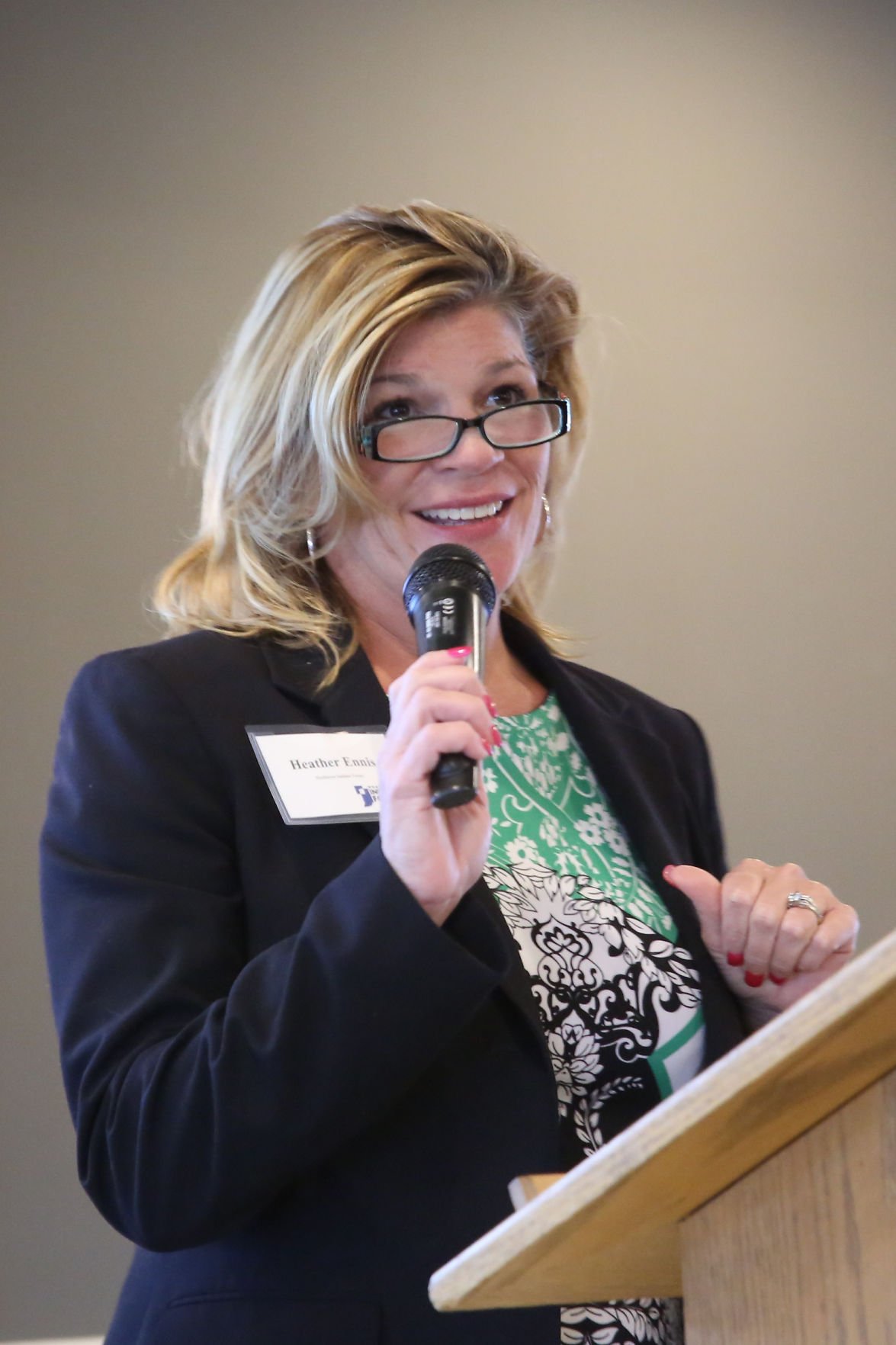 Heather Ennis, president and CEO of the Northwest Indiana Forum. The NWI Forum is launching another effort to lure Illinois businesses across the border.

Inquiries about moving businesses from Illinois to Northwest Indiana have spiked, Region officials say, since the Land of Lincoln passed a budget that raised personal state income taxes by 32 percent and the effective corporate income tax rate by 22.5 percent.

Lake County Economic Alliance President and CEO Karen Lauerman said her office typically handles 20 to 30 inquiries from businesses a week — ranging from the idly curious kicking the tires to companies already scouting sites. She's been getting 10 to 15 more inquiries a week from across the state line since the Illinois Legislature voted to raise taxes earlier this summer.

Northwest Indiana economic development officials hope to capitalize on the discontent with a new campaign that would brand NWI as a low-cost enclave in Chicagoland.

Starting with the air waves

“The opportunity to share the positive story of living and connecting business within the Chicago metro market is essential to our continued growth and success," NWI Forum Economic Development Director Joe Rurode said. “The Forum’s partnership with the RDA furthers our mission of marketing Northwest Indiana as the place to invest in now."

NWI Forum President and CEO Heather Ennis said the private economic development agency based in Portage was putting together marketing materials to appeal to Illinois businesses, especially manufacturers. She said it might not result in an immediate stampede across the state line, but would get factory owners to consider Northwest Indiana if they outgrow their existing space and need to expand or relocate.

"Obviously, moving a manufacturing company is a large undertaking so you have to be at a push point," she said. "No company just says, 'I'll pack up and move everything. That'll be a good business decision.' It's a process that takes time. Our message is that we will continue to be a great place to do business as they continue to go through these reorganizations and struggles in Illinois. It's advantageous to be here."

Northwest Indiana already has had success drawing manufacturers from the south suburbs across the state line, including AM Manufacturing, Carl Buddig, Land O'Frost, MAC Medical Supply Co. and Tec Air Inc. They are the most likely to move because they can retain most of their workforce, who just have to move a little farther, Ennis said.

Focus on the 'next level'

The NWI Forum did a similar campaign when Illinois last raised taxes in 2011, putting up billboards, placing ads on buses and reaching business owners through the Chicago Tribune and Crain's Chicago Business. Indiana also has done several campaigns at a statewide level, including with billboards along the border that asked motorists if they were "Illinoyed" by higher taxes.

The new marketing campaign, however, will target businesses from across the state, as well as residents, Ennis said. It will build on existing slogans the state has promoted such as "A State That Works" and "Taking Indiana to the Next Level."

The NWI Forum is coordinating the campaign with other agencies such as the RDA, the Lake County Economic Alliance and the Greater Northwest Indiana Association of Realtors.

"We want to be organized. We want our message to be crisp and consistent," Ennis said. "Everybody's doing such a great job of telling Northwest Indiana's story. And we keep having more and more positive things to say."

Indiana and the entire Midwest depend on a strong Chicago, but the latest round of tax hikes just reinforce NWI's position as a lower-cost haven just outside the nation's third-largest city with an economy bigger than Thailand's, Lauerman, the Lake County Economic Alliance president, said.

"We're considered the eastern suburb of Chicago, but we have more tax certainty with property tax caps," she said.

The Lake County Economic Alliance is now pursuing 79 projects, the top 20 of which could bring $700 million in investment and 8,500 jobs, Lauerman said. The economic development agency will continue to bring its message to companies at conferences and trade shows in Chicago.

"We tout Indiana's advantages, such as logistics, how we're on the right side of Chicago and how we have Lake Michigan and quality of life," she said. "Lake County will be the primary beneficiary of moves across the border since it's closest to the state line."

5 most-read stories today: $100K bond set for Portage mom charged in connection with the death of her 20-month-old daughter

US economy expanded at stronger 2.6 percent rate in Q2

WASHINGTON — The U.S. economy revved up this spring after a weak start to the year, fueled by a surge in consumer spending. But the growth spu…

Thousands of spectators will pack the Lake Michigan coastline this weekend to see aerial daredevilry, the soaring Blue Angels and beloved reti…

Lake County has the second fastest growing economy in Indiana over the last four years, according to New York financial technology company Sma…

Developers eyeing an e-commerce distribution center that could bring 3,000 jobs to Lake County

Developers are looking at building an e-commerce distribution center that would potentially employ up to 3,000 workers somewhere in Lake Count…

Wintrust reported a profit of $68.8 million in the fourth quarter, a 26 percent year-over-year jump.

Munster-based Land O'Frost wanted a piece of the organic food action, and now will have a place on Whole Foods' coveted shelf space.

Rosemont-based Wintrust made a record $82 million in profit in the first quarter, or $1.40 per share.

Illinois residents are starting to see mobile ads about how the grass is greener in Indiana: taxes are lower, housing is more affordable and c…

Munster-based Land O'Frost has launched a national advertising campaign for the first time in its 60-year history.

New court filings show that Indiana Grocery Group's bid won out in an auction because it was worth at least $21.3 million more than Jewel-Osco…

Fireworks sales booming in the Region

Flex-N-Gate Corp. plans to hire nearly 300 workers at a new auto parts factory in Hegewisch, just across the state line.

More than 34,220 Illinois resident decamped across the state line to Indiana in 2015, the most recent year for which data was available, accor…

The energy sector did well in 2016 because of an abundant supply of crude oil and refined products across the U.S. supply chain, Luke Oil Chie…

Anna Wermuth, who previously lived in Hobart and Highland, was honored for her legal work as vice-chair of  the Cozen O’Connor law firm’s national Labor and Employment Department.

This photo illustration shows the type of billboards the Indiana Economic Development Corp. posts along busy interstates in and out of Illinois in hopes of luring companies across the border to the Hoosier state.

Heather Ennis, president and CEO of the Northwest Indiana Forum. The NWI Forum is launching another effort to lure Illinois businesses across the border.