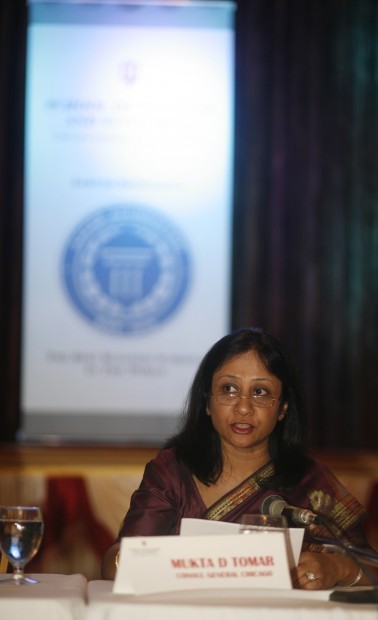 Mukta D. Tomar, the consul general of India in Chicago, addresses a symposium about doing business in India on Thursday night at the Indian American Cultural Center. 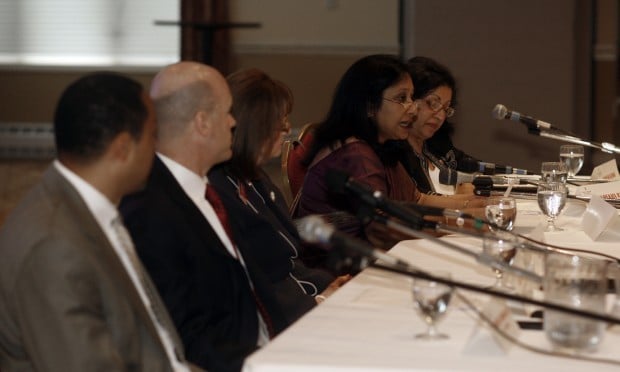 Mukta D. Tomar, second from right, the consul general of India in Chicago, addresses a symposium about doing business in India on Thursday night at the Indian American Cultural Center.

MERRILLVILLE | A growing economy, low labor costs, a stable political environment and investor–friendly policies are just some of the reasons India is calling for business with Northwest Indiana.

An Indiana University Northwest symposium Thursday on doing business in India welcomed Mukta Tomar, consul general of India in Chicago, who provided a general sense of the business climate in her home country. The symposium at the Indian American Cultural Center included local business leaders who either have a partnership in India or were in the process of entering that market.

Tomar said the relations between the U.S. and India has seen remarkable transformation during the last decade.

"Today our economic ties are robust and growing," she said.

A growth rate of 8.6 percent in gross domestic product, a young population, and a country with the second–largest pool of scientists and engineers in the world were some of the factors Tomar pointed out as beneficial for a business relationship with India.

Miller's Precision Enterprises in Hammond has been doing business with India since 2003. Mike Miller, chairman of the company that produces Tyvek garments, said the company was first drawn to India because of its stable democracy, English–speaking ability, and low wage and exchange rates.

"I felt we could do business there long term," Miller said.

He said the country is still facing infrastructure and utilities issues, but there's been a dramatic improvement since the company launched a plant there in 2003.

"The growing economy is impressive," he said. "They're hard–working. It's been a good relationship and a growing business for us."

Fellow panelist Robert Johnson is the CEO of Cimcor, a Merrillville company that develops Internet security software. Johnson said the India market is "exciting" and he plans to enter it in the next six to nine months.

"We like a country with mature markets and strong financial institutions in place," he said. "Truly India meets those criteria."

Johnson said his company was originally drawn to selling its product and expanding its market to other countries but assured that the research and development of his product would remain in Merrillville.

"We're dedicated to trying to help the economy of Northwest Indiana," he said.

The symposium was initiated by a grant IU Northwest Associate Professor Surekha Rao received from the Department of Education's Center for International Business Education Research.

"This symposium provided me an insight I did not have before about doing business in India," Shabbir said. "It also provided me with an opportunity to by speak with the consult of India as to what kind of regulations and rules are required."

For more information on doing business in India, visit http://www.investindia.gov.in.

Explosion rocks Cleveland-Cliffs Burns Harbor: 'Sounded like when two trains slam into each other'

An SUV in the drive-thru lane at the White Castle at the corner of Indianapolis Boulevard and 119th Street in Whiting crashed through the fast-food restaurant's storage building.

Midwestern Electric provides electrical services for traffic infrastructure to cities, states and other government agencies across the Midwest. The firm installs and maintains traffic signals, streetlights and other electrical systems in Indiana and Illinois.

BP diversifying but refinery and Region jobs here to stay: 'We don't see anything that will reduce jobs'

BP has been shifting away from fossil fuels to a more diversified energy mix that includes wind and solar.

It's shaping up to be a busy weekend in Miller with a community art exhibit, cookie walk and TEDx GARY Women.

BP agreed to pay $512,450 in penalties and implement more pollution controls at the BP Whiting Refinery after reaching a settlement with environmental groups that sued over repeated air violations in 2019.

The Chicago Auto Show will roll back to its usual time and place at McCormick Place next year.

Mukta D. Tomar, the consul general of India in Chicago, addresses a symposium about doing business in India on Thursday night at the Indian American Cultural Center.

Mukta D. Tomar, second from right, the consul general of India in Chicago, addresses a symposium about doing business in India on Thursday night at the Indian American Cultural Center.