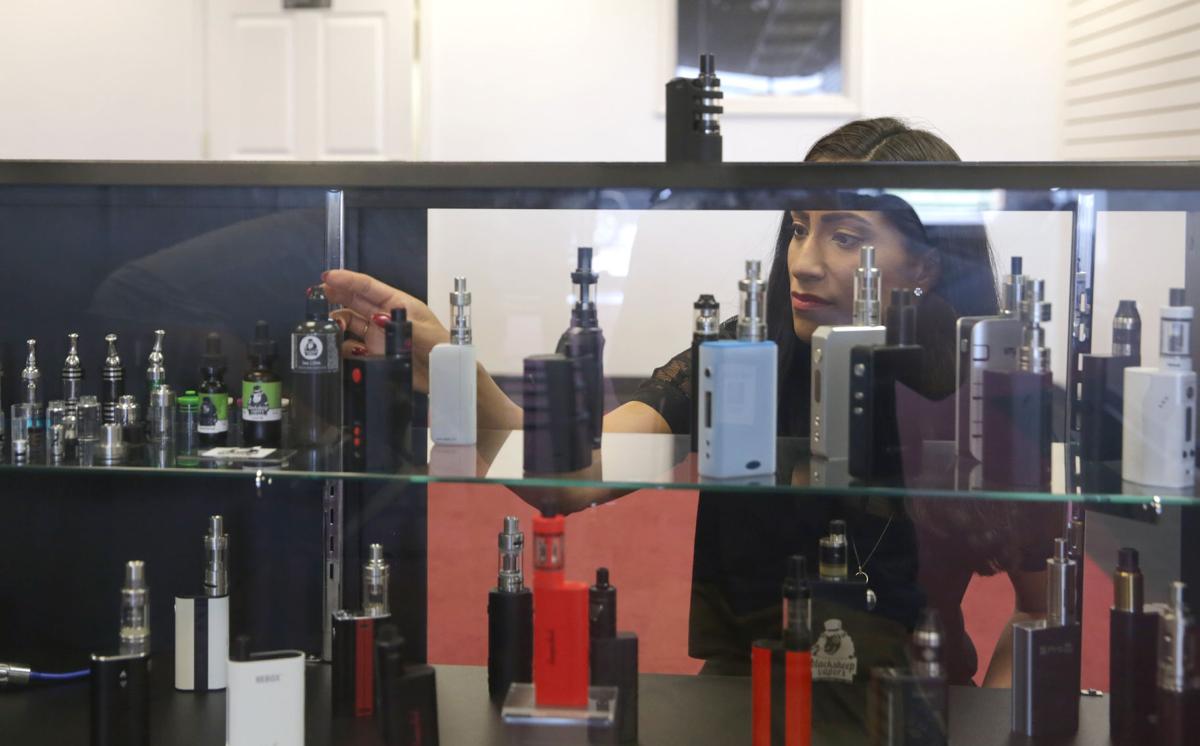 Blacksheep Vapors General Manager Jazmin Esparza helps a customer in July at her store in Chicago Heights. Esparza said Indiana's e-cigarette law passed in 2015 forced her to move her shop from Highland, Indiana, to Chicago Heights, in Illinois. Vape shop owners are hopeful an overhaul of the law now working itself through the Indiana General Assembly may offer them some relief. 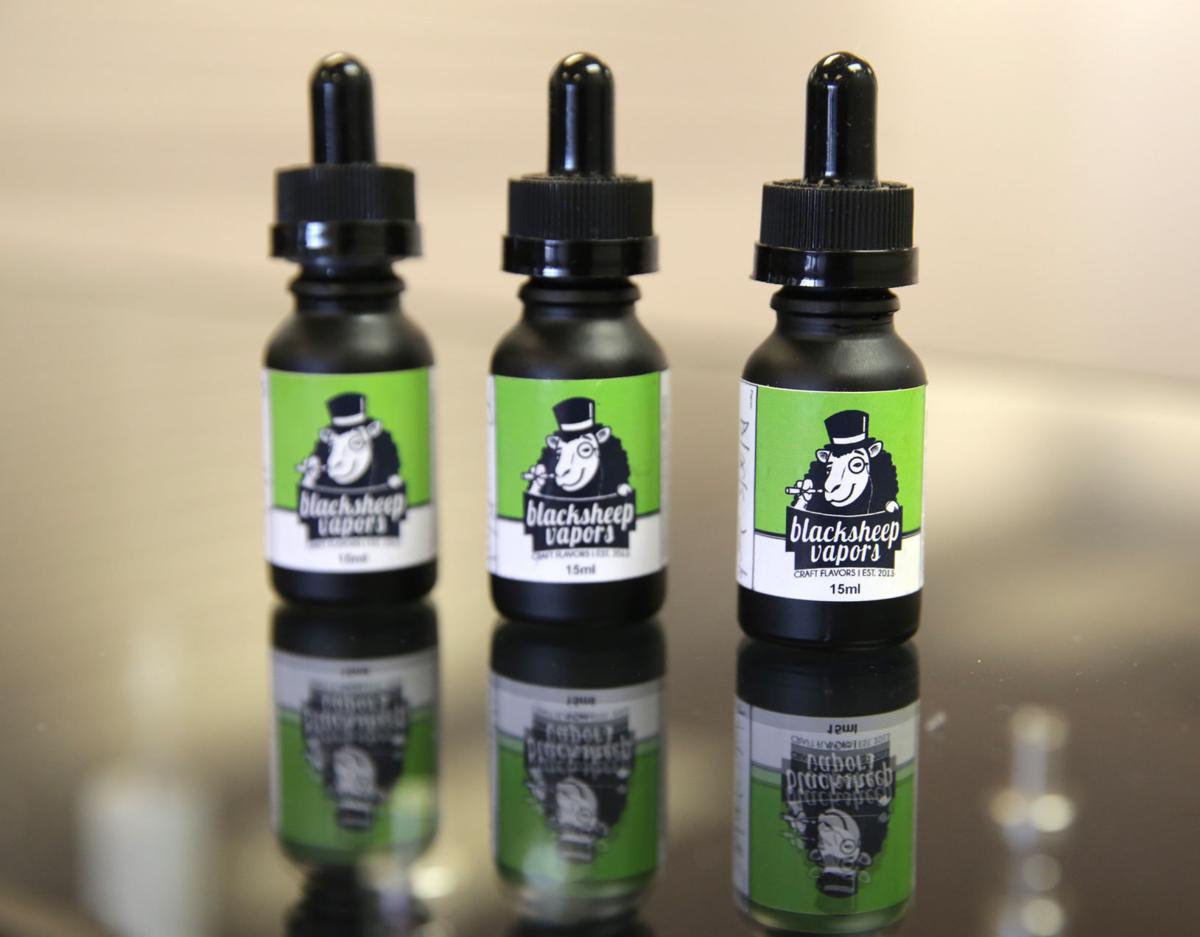 Blacksheep Vapors in Chicago Heights makes its own vape juice and packages it for sale under its own label.

INDIANAPOLIS — Indiana's problematic vaping law, which granted a monopoly to one company and sparked an FBI probe, would be drastically overhauled under a measure that a state Senate committee advanced Wednesday.

Very little of the current law would be left standing under the bill by Sen. Randy Head, a Logansport Republican.

"Indiana had instituted a protectionist regime," Head said of the bill, which was advanced to the full Senate on an 8-1 committee vote. "That was something we set out from the beginning to try and get rid of."

GOP leaders pledged this session to overhaul the law, which advocates say led companies to move operations to nearby states.

But the bill as currently written goes further. That's because the 7th U.S. Circuit Court of Appeals in Chicago struck down a major portion of the law last month, stating that it "looks very much like a legislative grant of a monopoly to one favored in-state company in the security business."

Under the bill, a curtailed set of state regulations would apply to in-state manufacturers of the nicotine-laced "e-liquid" consumed through vaping. They would be required to get a state permit and follow U.S. Food and Drug Administration rules. Manufacturers would also be required to use safety caps, include batch numbers and place warning labels on packaging.

"The bill opens the market back up," said Evan McMahon, of the advocacy group Hoosier Vapers, who says last year's law dropped the number of in-state manufacturers from 60 to single-digits. "It will allow companies to come back home."

First approved in 2015, Indiana's vaping law was ostensibly designed to create "e-liquid" safety standards. But changes made to it last year effectively gave a Lafayette-based security firm, Mulhaupt's Inc., sole discretion to decide who could be certified to produce "e-liquid" sold in the state.

Mulhaupt's certified only a handful of producers.

"We had people who could do this safely and we told them 'You're not allowed to be in the business,'" Head said.

The law guided everything from requirements for sinks to the details of contracts with outside security firms and the qualifications of those firms' personnel. Facilities had to be continuously monitored by video. And manufacturers needed an assortment of security certifications that few U.S. companies, if any, besides Mulhaupt's were qualified to provide.

By summer, the FBI was questioning a number of people connected to the law, including legislators who were instrumental in its passage such as Republican Sen. Ron Alting, who represents the district where Mulhaupt's is based.

In a statement issued Wednesday, Mulhaupt's said "we respect the decision made by members of the Senate Judiciary Committee" and pledged to "watch the legislative process closely."

"Mulhaupt's takes the business of protecting Hoosier consumers very seriously. Any changes to e-liquid laws should not put safety at risk," the company said.

Chris Brown, the owner of Evansville-based Cool Breeze Vapor, said he was happy with the current bill, but frustrated that he had to move parts of his 20-employee business across the Ohio River to Kentucky after he was refused a permit last year.

"This whole thing has pissed me off," he said. "You have to move your whole company to another state for no reason — just for other people to make a lot of money."

The FBI is investigating passage of Indiana's 2015 law regulating the e-cigarette industry, which comes as no surprise to owners of vape shops…

Blacksheep Vapors General Manager Jazmin Esparza helps a customer in July at her store in Chicago Heights. Esparza said Indiana's e-cigarette law passed in 2015 forced her to move her shop from Highland, Indiana, to Chicago Heights, in Illinois. Vape shop owners are hopeful an overhaul of the law now working itself through the Indiana General Assembly may offer them some relief.

Blacksheep Vapors in Chicago Heights makes its own vape juice and packages it for sale under its own label.