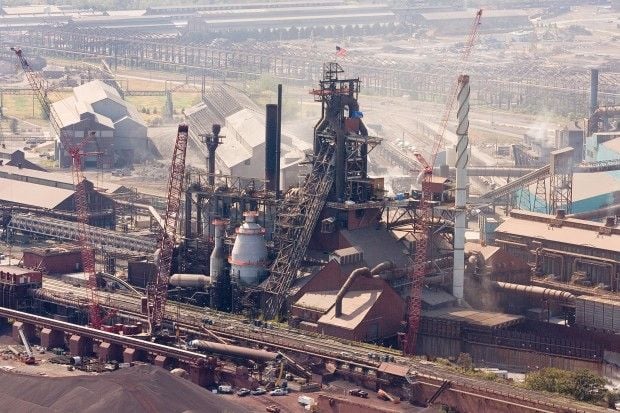 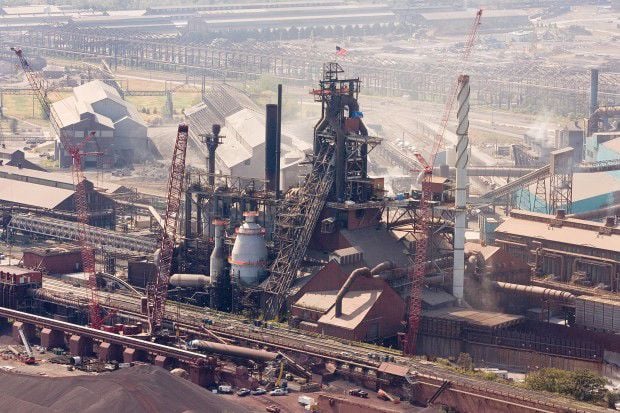 GARY | A divide has long split the steel industry.

Big integrated steel mills like those operated by U.S. Steel and ArcelorMittal in Northwest Indiana have forged iron in towering blast furnaces that make high-quality metal for cars, appliances, and trains. Upstart mini-mills, often in the South, have melted scrap metal in electric arc furnaces to make a lower-grade steel for rebar and other construction products.

Nucor Corp., which will surpass U.S. Steel this year in total steelmaking capacity to become the biggest steelmaker in the United States, pioneered the mini-mills that now account for 60 percent of all domestic steel production. No one has built a new integrated mill wtih a blast furnace since ArcelorMittal Burns Harbor went up 50 years ago, while a new mini-mill is currently under construction in Arkansas.

As they say, if you can't beat them, join them. U.S. Steel is now talking about tearing down the traditional wall between the integrated mill and the mini-mill, and making more steel with electric arc furnaces as part of an ongoing bid to control costs, so it doesn't hemorrhage money every time the economy falls ill. New leadership has been looking for new approaches after the company failed to turn a profit for five consecutive years after the Great Recession.

The Pittsburgh-based steelmaker is in the middle of a cost-cutting makeover that made Wall Street swoon and sent its stock price to soar over the last few months until a hedge fund manager dumped on the stock Tuesday.

As part of the Carnegie Way initiative, U.S. Steel announced earlier this year it plans to replace the blast furnace at Fairfield Works in Alabama, which would require a smaller workforce and potentially lower raw material expenses when it came online in 2017. The Alabama plant would lose 1 million tons of steelmaking capacity because of the switch, but it would cost less to operate because it would require fewer workers, could be turned off when demand dictates, and can be operated during off-peak hours to reduce electricity bills.

New Chief Executive Officer Mario Longhi, who previously ran the mini-mill company Gerdau Ameristeel Corp., said U.S. Steel is looking to replace additional blast furnaces with electric arc furnaces. The company is analyzing where it would make financial sense to do so.

"It's mostly capacity replacement, not addition," he said during the third-quarter conference call.

Ending the carbon alloy project at Gary Works frees up capital for such projects, Longhi said.

Changes in works, but which ones still being considered

"Well, I won't give you a percentage, because we don't have that clearly defined yet, but I can guarantee you that we're not going to sit on only the one that we have defined," he said. "Now this footprint will be coupled to the better understanding that we will have of the markets, the trends, the needs out there and the changing world that we're in ... Certainly it's going to be more than one."

Gary Works would be a logical place to add electric arc furnaces, steel analyst Charles Bradford said. The No. 14 blast furnace, the largest at the mill, was just relined in 2005 and has too big a production capacity to make it a target, but the three other smaller blast furnaces are potential candidates for replacement.

Building an electric arc furnace would, however, cost more than U.S. Steel anticipates, Bradford said. He has questioned the cost and wisdom of relining blast furnaces for years, but said now is an inopportune time to replace them with electric arc furnaces instead, given the high cost of scrap metal and the low cost of raw materials.

"I've been championing that, but going to EAF makes no sense right now," he said.

Miller Pizza Company owner mourned as a bedrock of community

Miller resident Gary Ian Goldberg died at the age of 77.

BP is reportedly selling a major stake in its U.S. pipelines, including to the BP Whiting Refinery.

Small business owners in Indiana surveyed by the National Federation of Independent Business said they have not been able to fill 42% of job openings, which was a record high. About 28% said they raised pay during the past 12 months, and 17% plan to increase compensation in the next three months.

The closure is expected to last the full two and a half years of the project, the Northern Indiana Commuter Transportation District announced Tuesday.

Highland-based Triple A Express, one of the Region's longest-running best-known taxi services, is closing down after 27 years.

Steak 'n Shake, the iconic burger chain known for its steakburgers and hand-dipped milkshakes, reopened its restaurants in Portage and Michigan City for carryout and drive-through only.

U.S. District Court Judge Philip P. Simon issued a decision Wednesday against the petroleum giant in a 2019 lawsuit filed by the Indianapolis chapter of the California-based Sierra Club.

Ford plans to keep the Chicago Assembly Plant shuttered and thousands of workers laid off for two additional weeks because of the global semiconductor shortage that's been hampering automotive factories around the world.

Ford plans to temporarily shut down the Chicago Assembly Plant and lay off workers next week as a result of the global semiconductor shortage that's greatly disrupted the automotive industry.