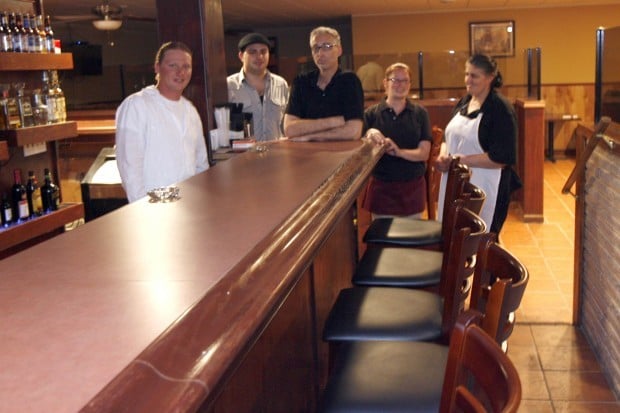 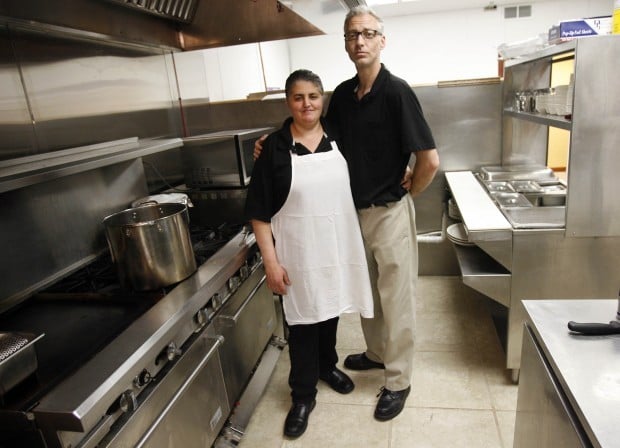 New owner and chef Aga Nikolaj, left, stands in the kitchen with manager Dean Cattorini at The Beach Cafe in Gary's Miller neighborhood. 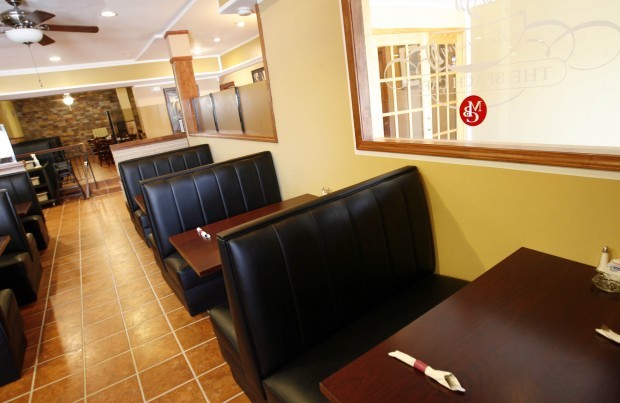 This new incarnation of The Beach Café has a Tuscan feel with warm ochre-colored walls, rust-brown Italian tile floors, wood, brick and stone. Black booths and dark wood tables seat up to 170 diners.

GARY | A new era in family dining has dawned in Miller Beach with the reopening May 29 of The Beach Café.

New owners Marash and Aga Nikolaj brought back the bar and grill at 903 N. Shelby Road two years after it was shuttered.

It's been a nine-month journey for the husband and wife, Albanian immigrants from Yugoslavia who have lived in the region since the 1990s and raised five children who now are 15 to 23 years old.

The couple's daughter, Maria Djokat, came from Detroit to work during the reopening. Sons Joseph, Mark, Tommy and Nick work at every position from hosts to dishwashers and table bussers. Joseph Nikolaj even shut down his own business — Joe's Auto Sales in Lake Station — to help his parents get the restaurant ready.

The Nikolajs closed on the two-story building in October. They and their four sons spent every day renovating the restaurant, which had been part of the Miller neighborhood since the 1940s.

Joe and Josie Hayduk and Joe Kovalik bought the restaurant in 1962. They ran the eatery for 26 years.

"My daughter celebrated her first birthday there," said Josie Hayduk, of Valparaiso, who lived above the restaurant for a number of years. Today that space has been renovated into a banquet facility.

When the two Joes retired, the café was sold to Doug Wymer, who hosted a grand opening in February 1990 and ran it for more than 10 years. When the final owner lost his liquor license, it was the death knell for the landmark restaurant.

This new incarnation of The Beach Café has a Tuscan feel with warm ochre-colored walls, rust-brown Italian tile floors, wood, brick and stone. Black booths and dark wood tables seat up to 170 diners. There is a family dining room and a bar area.

The staff of 10 eventually will grow to 20, said manager Dean Cattorini, who lives in the neighborhood. Cattorini brings experience managing restaurants.

"He walked in off the street and I hired him on the spot as the manager," said Aga Nikolaj, who does all the cooking at her new restaurant. "I had a feeling."

The Beach Café's family-friendly theme is reflected in the menu, which includes a children's menu.

"We have everything from barbecued ribs to grilled cheese," Cattorini said.

Ayers said The Beach Café is a tradition in the Miller Beach area, and its reopening has been eagerly anticipated.

"The Miller Beach residents are quite excited," Ayers said. "We wish them much success."

What: The Beach Café

Where: 903 N. Shelby (the intersection of Locust and North Shelby streets) in the Miller Beach neighborhood of Gary.

Restaurant hours: 10 a.m. to 10 p.m. Sundays through Thursdays; 10 a.m. to 11 p.m. Fridays and Saturdays; bar remains open for several hours after kitchen closes, with appetizers on the menu.

Reservations are recommended for parties of 12 or more.

A disgruntled gun-toting customer fired shots Sunday after being told there was no more pizza at a local Little Caesars, police said.

The steelmaker said it would strive to become net zero on carbon emissions by 2050, release more sustainable grades of verdeX steel, and work to "tackle climate change profitably." It promised changes to how steel is made and how its mills are powered.

Korellis Roofing made significant donations to the St. Joseph Carmelite Home in East Chicago after a fire damaged it last month.

Kalamazoo, Michigan-based Zeigler Automotive Group, which recently entered the Northwest Indiana market, was named one of the top workplaces in the country.

A crackdown on building permits could end up backfiring, the City Council was told Tuesday night.

The real estate firm @properties, the largest residential brokerage firm in Chicago, just opened its latest office in Northwest Indiana where it has quickly amassed 120 agents and $300 million in sales.

New owner and chef Aga Nikolaj, left, stands in the kitchen with manager Dean Cattorini at The Beach Cafe in Gary's Miller neighborhood.

This new incarnation of The Beach Café has a Tuscan feel with warm ochre-colored walls, rust-brown Italian tile floors, wood, brick and stone. Black booths and dark wood tables seat up to 170 diners.