The Irma arrived at the Port of Indiana-Burns Harbor in April, ushering in the international shipping season.

Cranes at the Port of Indiana-Burns Harbor unload rubber-tire gantry cranes from Ireland earlier this year.

Craft brewery tanks made in Europe passed through the Port of Indiana-Burns Harbor on their way to Bell's Brewery in Michigan in 2018. 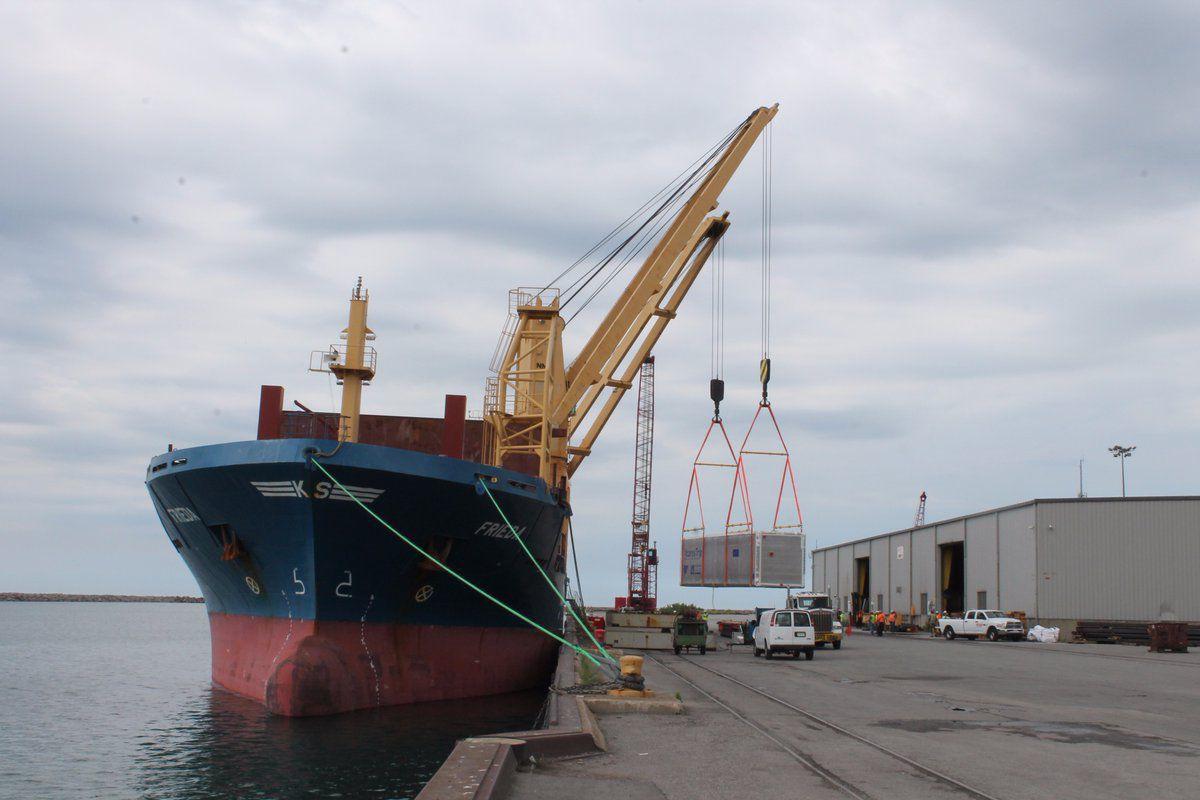 The shipping industry employs 15,360 people across the state, generating $874 million more in worker income annually, a study by PricewaterhouseCoopers on behalf of the Transportation Institute found. Shipping to the Port of Indiana-Burns Harbor and the two ports on the Ohio River at the southern end of the state contributes an estimated $3.9 billion a year to Indiana's economy.

“I commend the initiative of the American Maritime Partnership and the Transportation Institute to quantify and demonstrate the essential contribution of the shipbuilding and maritime industry to the strength of our national economy and our national security.” U.S. Rep. Pete Visclosky, D-Gary, said.

“I appreciate the dedicated work of the shipping industry in Northwest Indiana to grow our economy, and also remain dedicated to improving the environment," Visclosky said. "We must continue to do all we can to support good-paying shipbuilding and maritime job opportunities in the Great Lakes state of Indiana and throughout our nation.”

“Central Marine Logistics is proudly based in Griffith, Indiana – the heart of the Midwest steel industry,” Central Marine President Tom Wiater said. “Our office staff and many of our crew members are Hoosier. But a lot also call other Great Lakes states home as well. Many of our team members are proud second and third-generation CML mariners... Our vessels are constantly moving cargoes in and out of Midwest ports and driving Midwest jobs. Our business is growing and we are annually investing over seven figures in the future of our fleet."

Overall, the domestic maritime industry employs 650,000 people across the country, generating $41 billion in income and contributing $154.8 billion to the overall economy, the study found.

U.S. Steel named PPG Chairman and CEO Michael McGarry to its board of directors.

U.S. Steel pulled in a profit of $68 million in the second quarter.

ArcelorMittal USA has been suffering from tough market conditions.The company, which lost $447 million or $0.44 per share in the second quarte…

U.S. Steel will continue to go forward with major investments, including $750 million at its Gary Works steel mill over the next few years, de…

The Port of Indiana-Burns Harbor landed a $220,262 federal grant to beef up security.

Indiana's ports have a $7.8 billion impact on state's economy

Many people might think of Indiana as a landlocked Midwestern state, but it's actually a hub of international shipping.

The Ports of Indiana system that oversees the Port of Indiana-Burns Harbor in Porter County has named a new chief executive officer.

New stevedore aims to unload cargo from ships in Gary

International shipping down 3.5% on the Great Lakes

International shipments through the St. Lawrence Seaway to Great Lakes ports like the Port of Indiana-Burns Harbor have fallen by 3.5% so far …

International cargo on the Great Lakes declined by 7% last year

International cargo on the Great Lakes to ports like the Port of Indiana-Burns Harbor fell because of trade conflicts, soggy farm fields and high water.

The Irma arrived at the Port of Indiana-Burns Harbor in April, ushering in the international shipping season.

Cranes at the Port of Indiana-Burns Harbor unload rubber-tire gantry cranes from Ireland earlier this year.

Craft brewery tanks made in Europe passed through the Port of Indiana-Burns Harbor on their way to Bell's Brewery in Michigan in 2018.