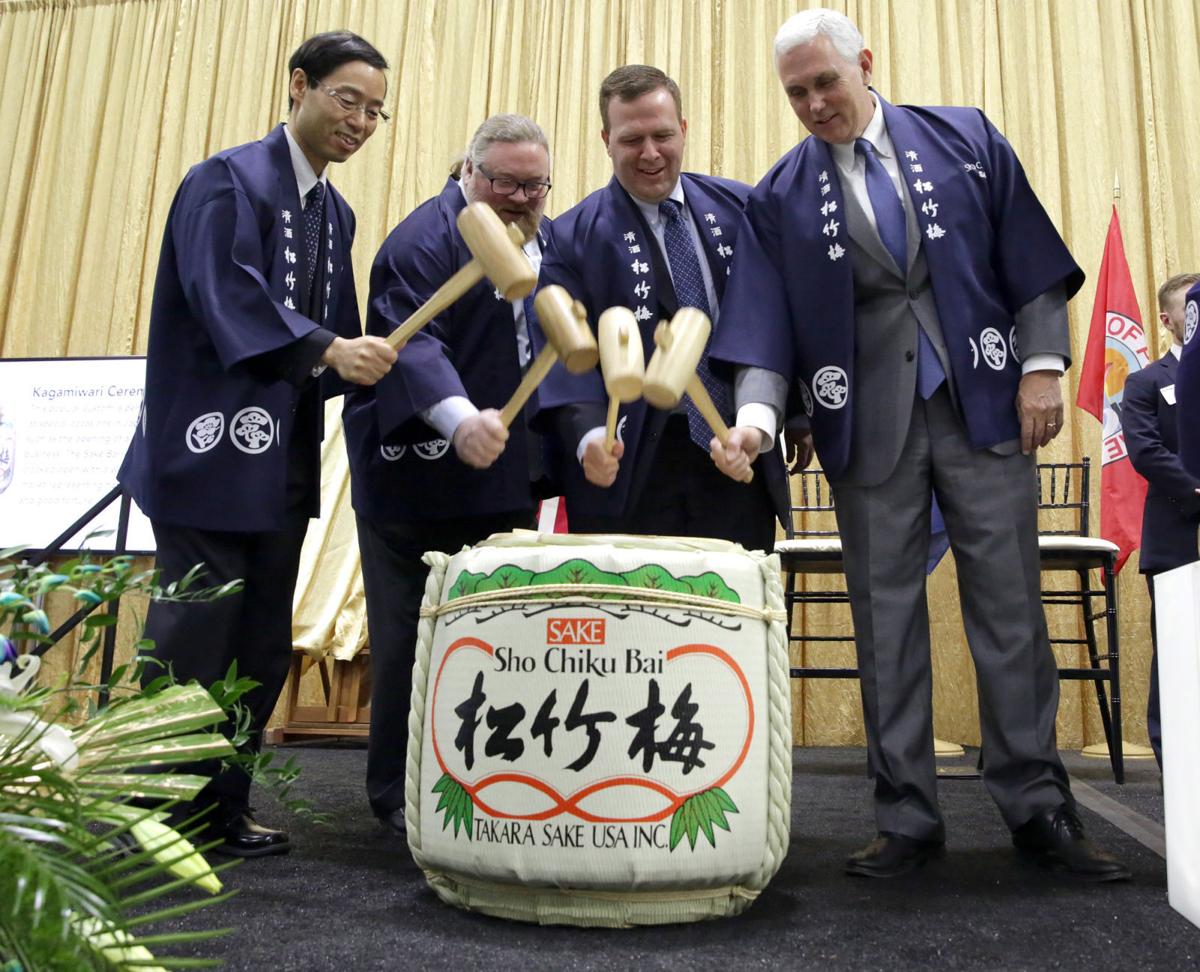 This was the scene in April at the grand opening of Monosol's Portage plant. From right, then- Indiana Gov. Mike Pence, now vice president of United States; Portage Mayor James Snyder; and officials break open a barrel of sake. The company now plans to expand even further in Portage. 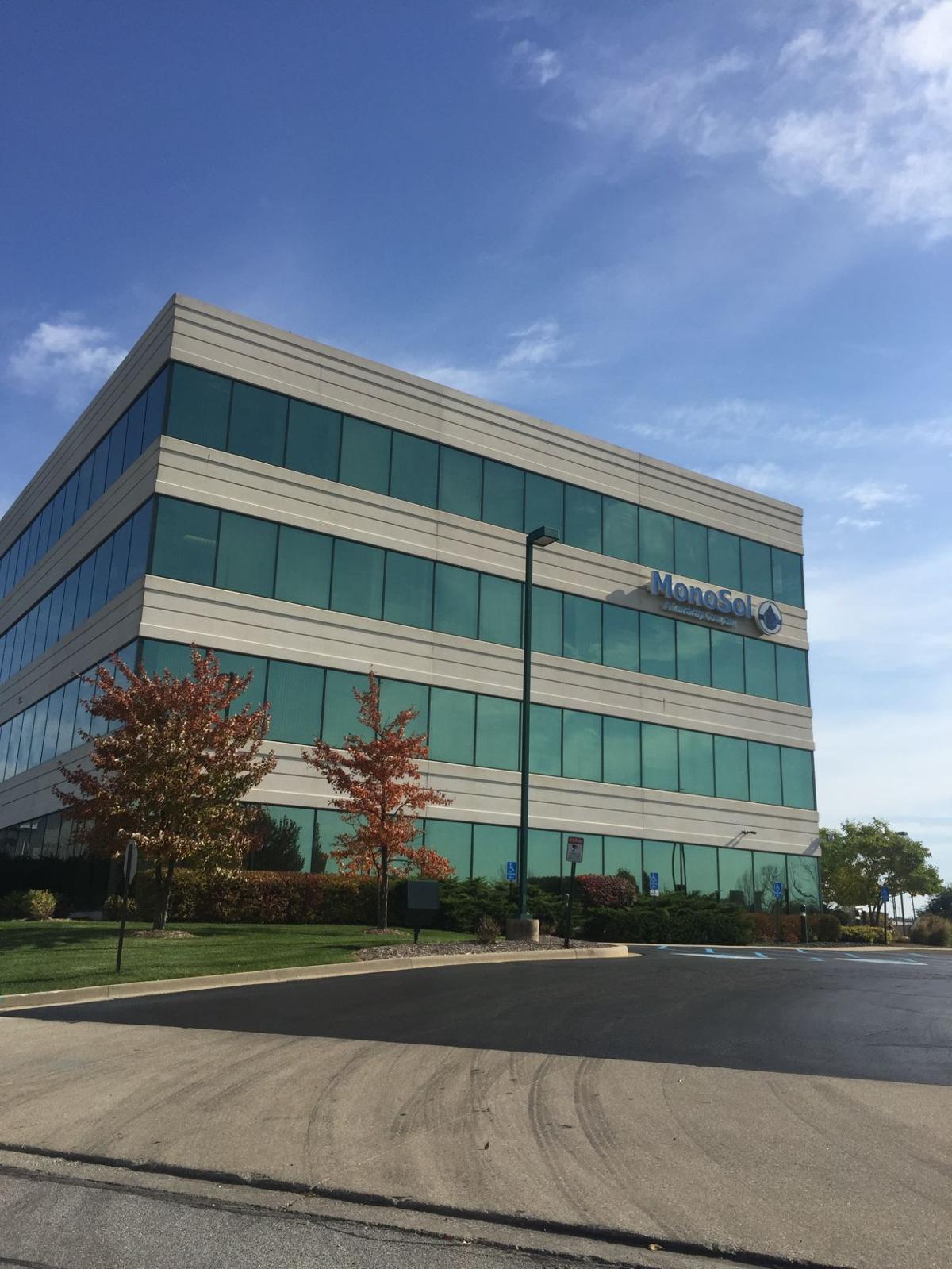 MonoSol headquarters in Merrillville. The company is looking to enter new markets, including cosmetics.

A fast-growing company that makes water soluble film plans to hire 60 workers this year and accelerate completion of its new $95 million Duneland facility in Portage.

MonoSol, a subsidiary of Japan-based Kuraray Co., makes the film for the widely popular Tide Pods and Cascade Pods, and has been experiencing double-digit growth every year.

Business is so robust MonoSol plans to start construction this year on phases II and III of its 300,000-square-foot state-of-the-art plant in the AmeriPlex at the Port business park in Portage, President and Chief Executive Officer P. Scott Bening said.

That plant had its grand opening in April.

The company originally planned to open a second production line by 2020, but now will ramp up to six production lines in an expansion project in Portage that will start this year. Construction had to be moved up by at least a year, because demand is so strong that MonoSol needs to add more production capacity as soon as possible for customers like global consumer goods giant Procter and Gamble, Bening said.

The project is expected to triple the plant's production volume.

Because of its growth, MonoSol is looking to add about 60 more employees over the course of the year, mostly at the new Duneland facility but also at its Merrillville headquarters, its original plant in Portage and its LaPorte factory.

"We're growing at a rapid pace on the strength of the business," said John Gornto, MonoSol vice president of human resources and risk management. "We need more employees in all of our functional areas."

MonoSol is mainly looking for production workers who would start out at $14.80 an hour and make $18.03 an hour after six months.

The company also needs salaried professionals, supervisors and managers, as well as several maintenance technicians who earn $27.93 an hour. Hourly workers are represented by Teamsters Local 142.

Jobs at MonoSol include benefits such as health insurance, use of private health clinics with minimal wait times, 401 (k) retirement plans and profit-sharing. MonoSol employees also get 8 hours of paid time off for volunteering and the chance to participate in the company's community campaigns, such as its Dissolve Hunger Program.

"We were a small organization that's been rapidly growing, so we seek fast-moving people with an entrepreneurial spirit who are comfortable wearing multiple hats," Gornto said. "We are looking for people with the flexibility to grow and change."

To apply or for more information, visit monosol.com.

Representatives of Northwest Indiana heavy industry were appointed to serve on the board of the Indiana Manufacturers Association, the "only t…

Can MonoSol change shaving the way it did laundry?

MonoSol, the dissolvable film-maker in Merrillville, is looking for another hit product with shaving cream packets that dissolve with water ri…

MonoSol, the Merrillville-based company that makes the dissolvable film for Tide Pods, and area employers Aldi and Arby's were recognized as o…

Enterprise of the Year: Monosol expects to double in size over five years

Monosol has been around since 1953, but this last year the business has experienced breakneck growth most companies would envy.

Business people can excel as leaders by apologizing when appropriate and forgiving those who have harmed them, a motivational speaker told the…

MERRILLVILLE — MonoSol, the water soluble film maker that's had tremendous success with Tide Pods, is looking to branch out into a new market.…

MonoSol named one of the Best and Brightest workplaces

One of the best companies to work for in the United States is based in Merrillville and operates three production facilities in Porter County.

MonoSol RX, a pharmaceutical company that was spun off from Merrillville-based MonoSol, secured a $50 million credit facility that will be use…

MonoSol launches product that will be used in Latin America

Merrillville-based MonoSol, which dominates the global market for a water-soluble films, launched a new product that food processors will use …

The Ross Group has finished construction on MonoSol’s new $95 million plant in Portage.

Merrillville-based MonoSol, which has been cleaning up with popular household products like Tide Pods, marked the opening of its new $95 milli…

Region encouraged to think differently after $2 billion loss in income

Northwest Indiana’s steel industry provided 70,000 good-paying jobs as recently as the 1970s, but employment in the industry has dwindled to a…

This was the scene in April at the grand opening of Monosol's Portage plant. From right, then- Indiana Gov. Mike Pence, now vice president of United States; Portage Mayor James Snyder; and officials break open a barrel of sake. The company now plans to expand even further in Portage.

MonoSol headquarters in Merrillville. The company is looking to enter new markets, including cosmetics.