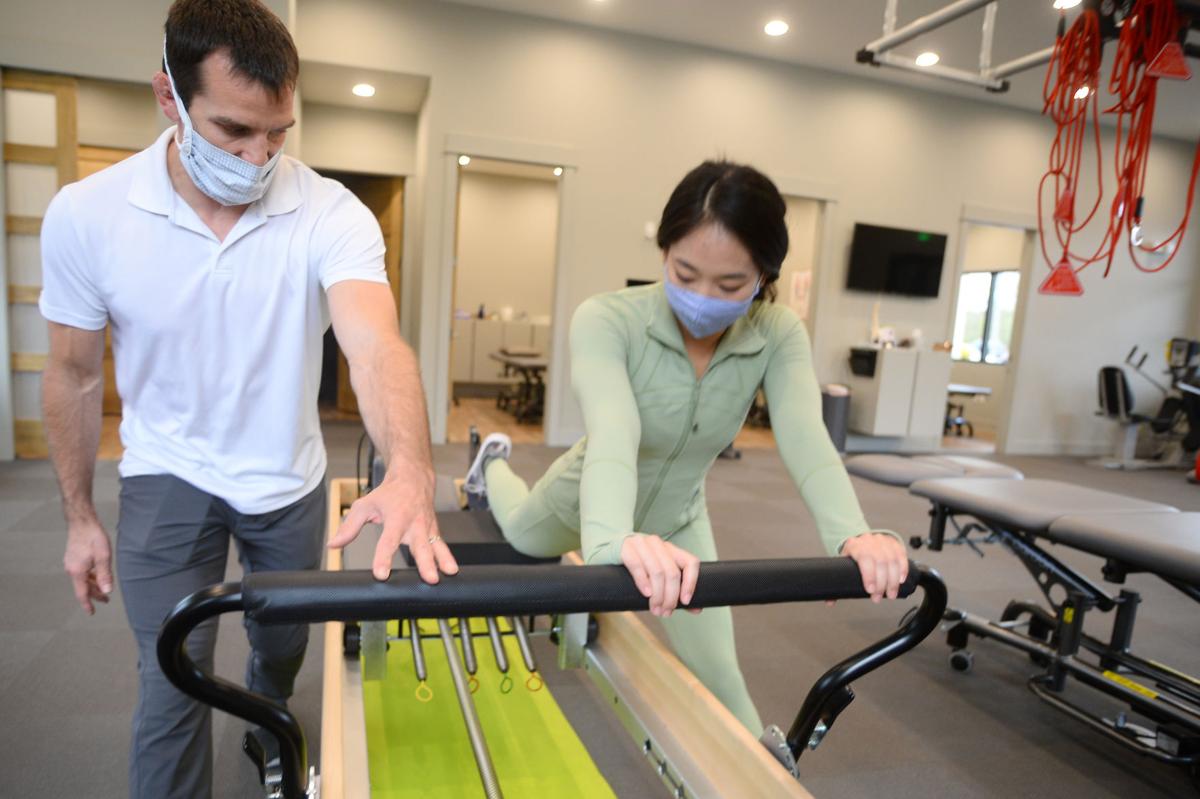 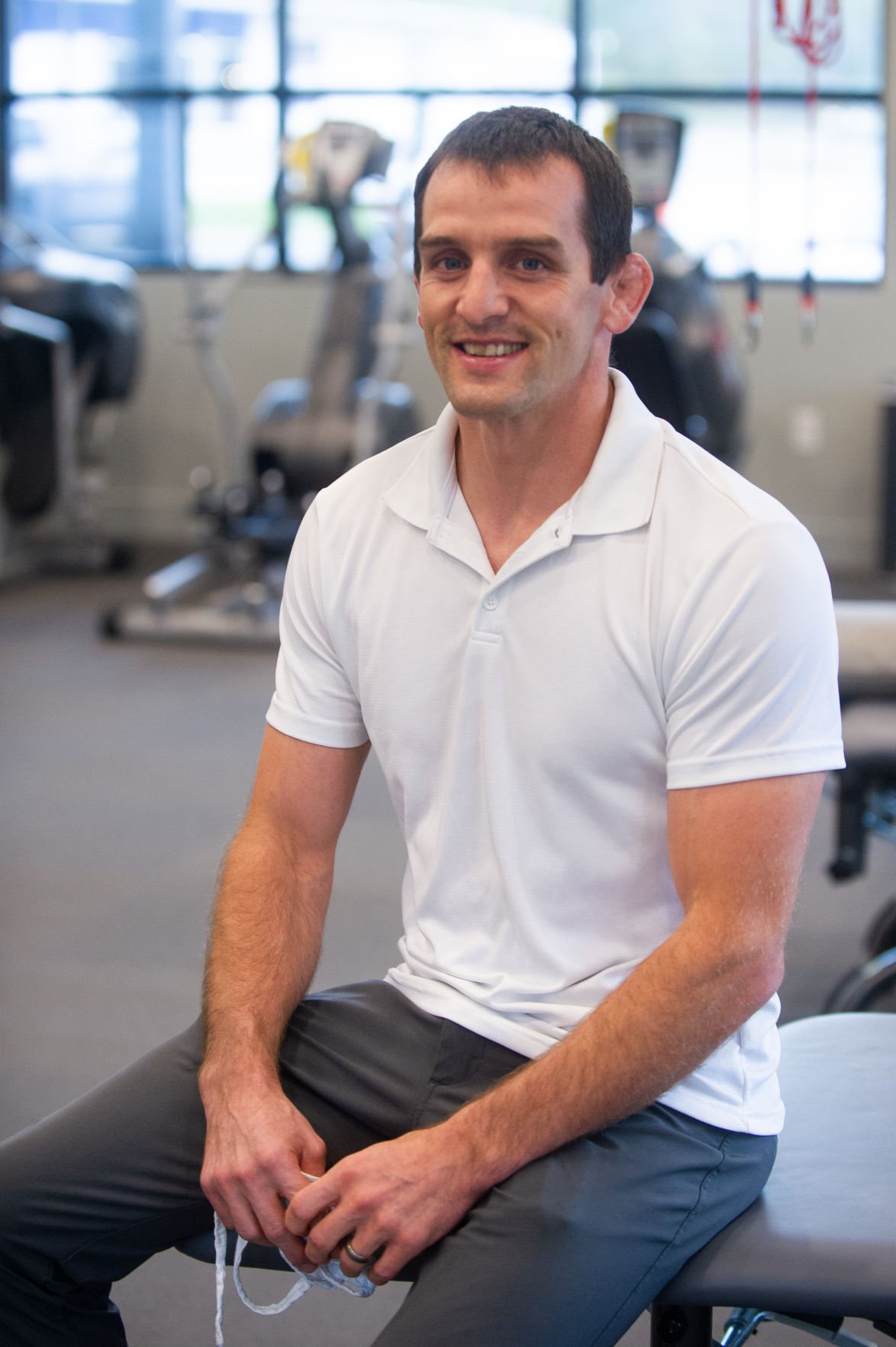 Dr. Matt Gentry, a doctor of physiotherapy at Physiopoint in Cedar Lake, was a freestyle wrestler for Canada in the 2008 and 2012 Olympics. 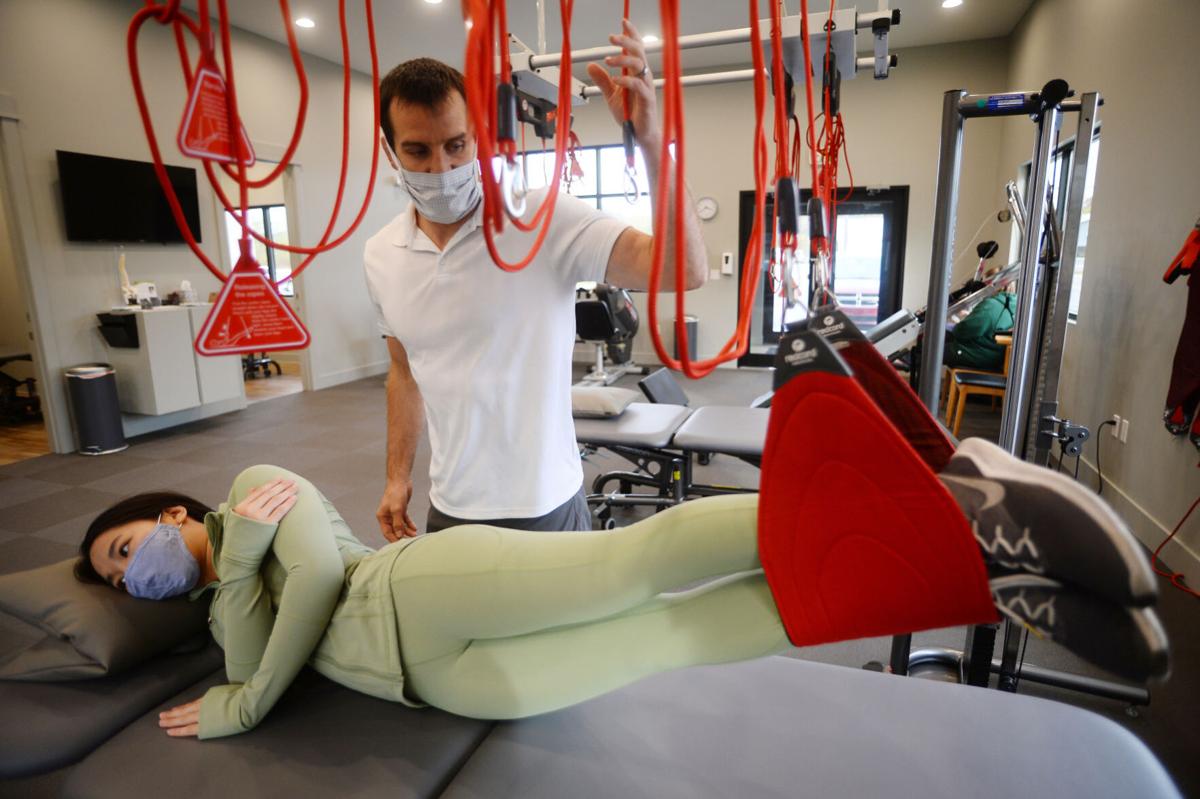 Dr. Matt Gentry and Caroline Dhana demonstrates exercises with the Redcord workstation at at Physiopoint in Cedar Lake. 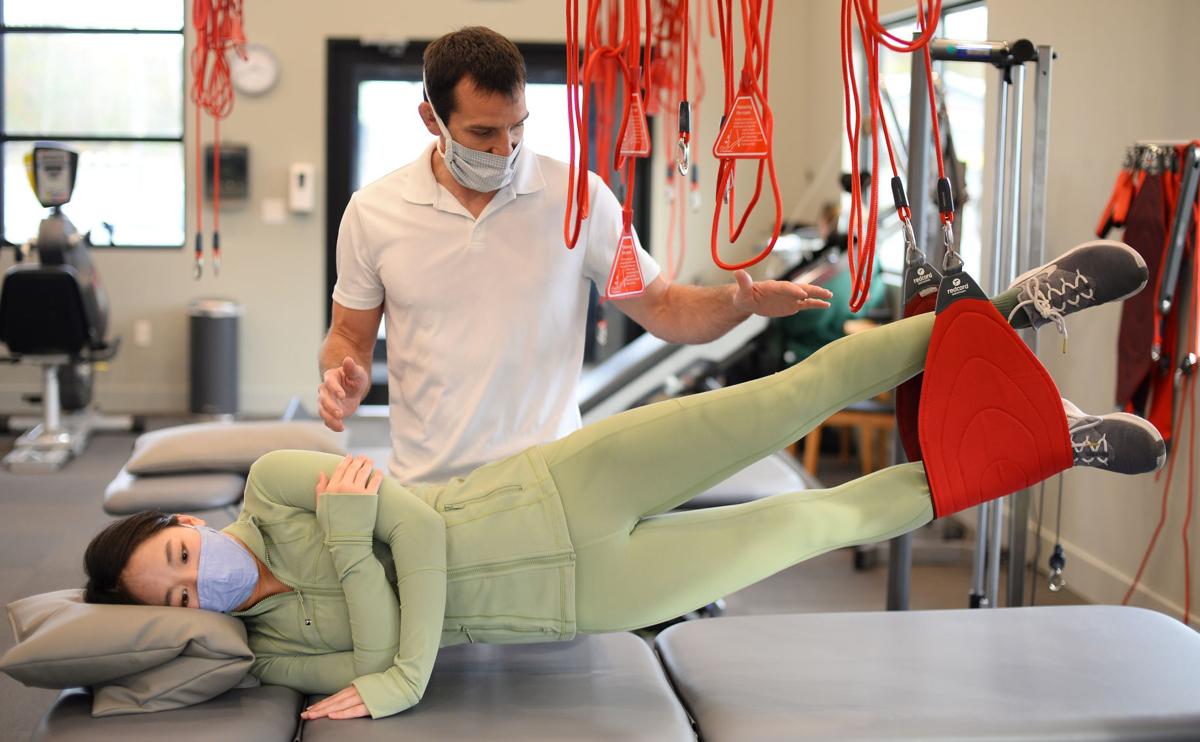 Dr. Matt Gentry, with the help of Caroline Dhana, a Crown Point High School senior,  demonstrates exercises with the Redcord workstation at Physiopoint in Cedar Lake. 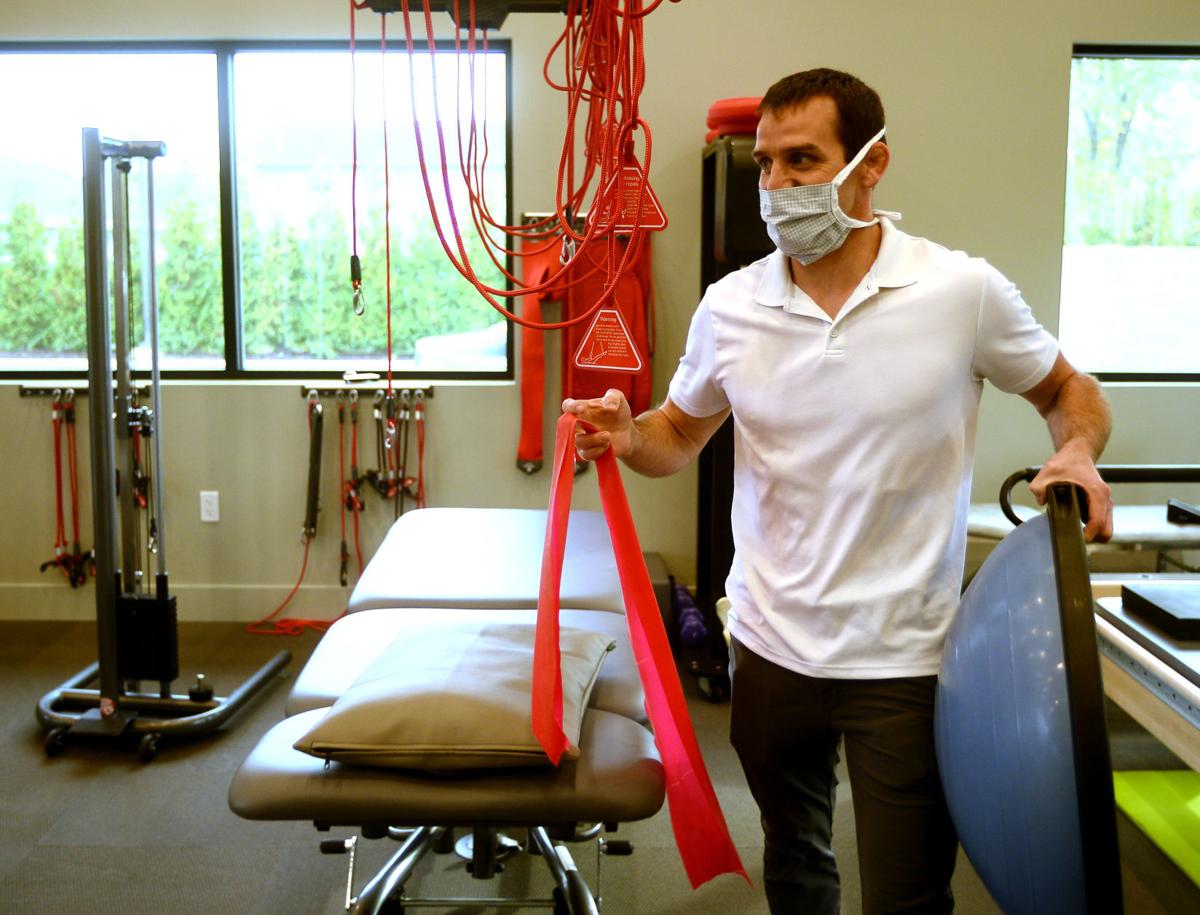 Dr. Matt Gentry gets equipment for a client at Physiopoint in Cedar Lake Tuesday afternoon. 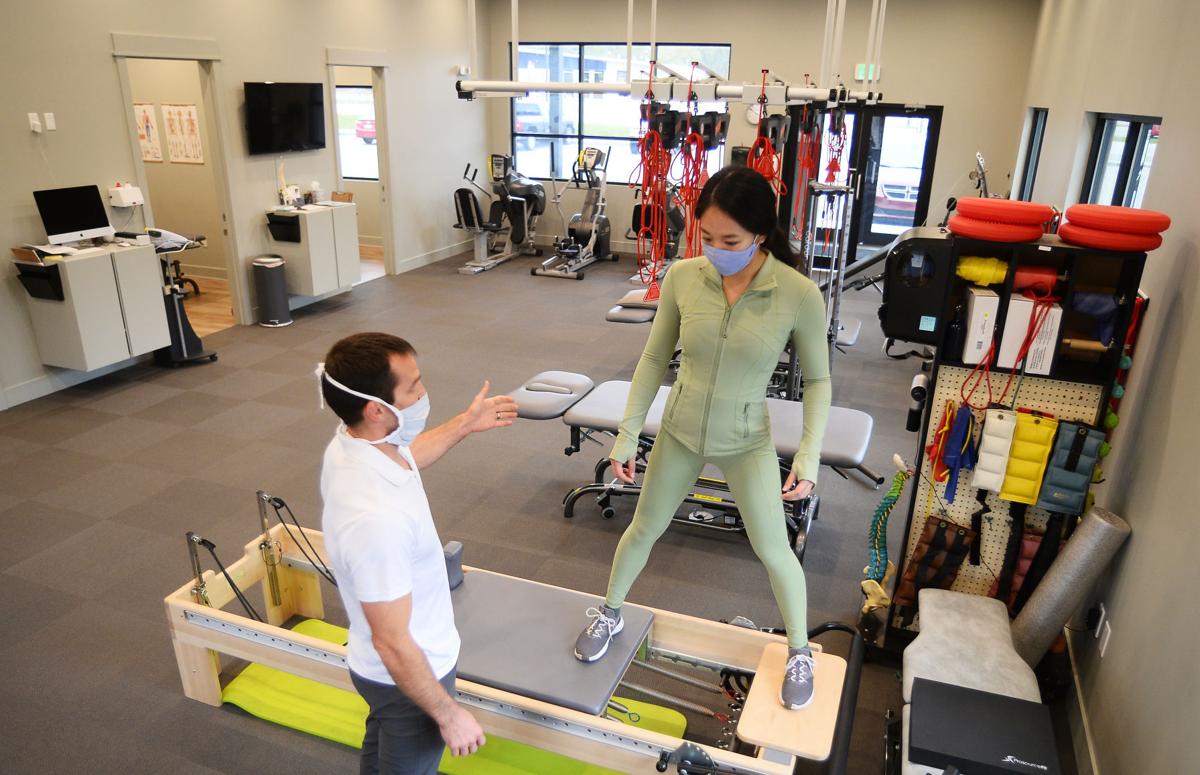 CEDAR LAKE — Matt Gentry fell in love with the sport of wrestling early on.

"I was 6 years old, in first grade, and remember bringing home a flier about wrestling at school. I loved wrestling from the first day," Gentry said.

It was a youthful sports passion that would lead Gentry, now 38, on an amazing life journey starting with his obtaining a wrestling scholarship to attend Stanford University, a stellar college coaching career at Stanford upon graduation, then international competition on the Canadian Olympic team, culminating in his competing in the 2008 and 2012 Olympic Games.

"My growth in the sport of wrestling was organic. I always loved it," Gentry said.

"I love the physical nature of my job," Gentry said. He likens what he does for his patients to solving a puzzle so so they can "move better and feel better."

Gentry said his practice includes working with athletes who may have received sports-related injuries, as well as senior citizens dealing with pain issues.

"I've worked with children as young as 3 years old and those as old as 97 years old," Gentry said.

Initially, patients are given a one-hour initial assessment to determine what is causing the pain.

"Every person gets an individual assessment tailor-made to that individual. We want to be very specific," Gentry said.

One of the tools Gentry uses at PhysioPoint is dry needling, a technique using a dry needle, one without medication or injection, to treat pain and movement impairments.

Other treatments used by Gentry include Red Cord physical therapy, with PhysioPoint one of the only locations offering it in Northwest Indiana.

On a recent weekday, Gentry used the Red Cord physical therapy, which utilizes ropes and slings to off-load a patient's body weight, with Caroline Dhana, a Crown Point High School senior, who in the past has received sports-related injuries as a swimmer.

"It's adaptable to every level, including for people who can barely move," Gentry said.

Other treatments offered include pilates reformer equipment, which is also good for stretching the hip and hamstring areas, Gentry said.

Gentry, who lives in Manteno, Illinois, with his wife and four small children, was born in Grants Pass, Oregon to a mom who was Canadian and a dad who was born in the United States.

While at Stanford University, where he received a degree in human biology in 2004, Gentry was called "one of the most successful wrestlers in school history," going 42-0 in 2004.

After graduation, Gentry coached Division I wrestling at Stanford while competing internationally on the Canadian Olympic team, possible because of his dual citizenship.

Gentry graduated from Governors State University with honors in 2017 and received an internship to work at PhysioPoint in Crown Point, which led to a full-time position.

He worked in Crown Point for the past three-and-a-half years until September when he moved to the new PhysioPoint at 12636 Wicker Ave. in Cedar Lake.

And Gentry said he definitely incorporates what he learned from his experiences as a two-time Olympic competitor including having the right mindset.

"Mindset is an important component to life. If you think you are better you will feel better," Gentry said.

Michigan City merchants reeling after missing out on beach season

A six-story structure containing 55 units would go up on the site of a former Amtrak train station north of U.S 12 just west of Franklin Street.

Combination KFC and A&W restaurants close in Hobart and Chesterton

A&W is no longer serving "All American Food" like root beer, cheese curds and Coney dogs anywhere in Northwest Indiana.

U.S. Steel has completed its acquisition of the Big River Steel mini-mill in Arkansas in a historic diversification beyond the integrated steel production it's done for nearly 120 years.

After almost 50 years, LaPorte veterinarian not close to retiring

Dr. Larry W. Smith, a veterinarian from LaPorte for close to a half century, has no plans to retire from the job he loves.

The Town Council on Tuesday adopted a resolution endorsing the tax. The panel’s decision came after the Crossroads Regional Chamber of Commerce board of directors voted in support of the proposal, Councilman Shawn Pettit said.

Ford is recalling locally made Explorer and Aviator Sport Utility vehicles because of motor mount fasteners that could become loose over time.

Stock + Field, formerly known as Big R, filed for bankruptcy and is closing all its stores, including its Michigan City location.

Dr. Matt Gentry, a doctor of physiotherapy at Physiopoint in Cedar Lake, was a freestyle wrestler for Canada in the 2008 and 2012 Olympics.

Dr. Matt Gentry and Caroline Dhana demonstrates exercises with the Redcord workstation at at Physiopoint in Cedar Lake.

Dr. Matt Gentry, with the help of Caroline Dhana, a Crown Point High School senior,  demonstrates exercises with the Redcord workstation at Physiopoint in Cedar Lake.

Dr. Matt Gentry gets equipment for a client at Physiopoint in Cedar Lake Tuesday afternoon.