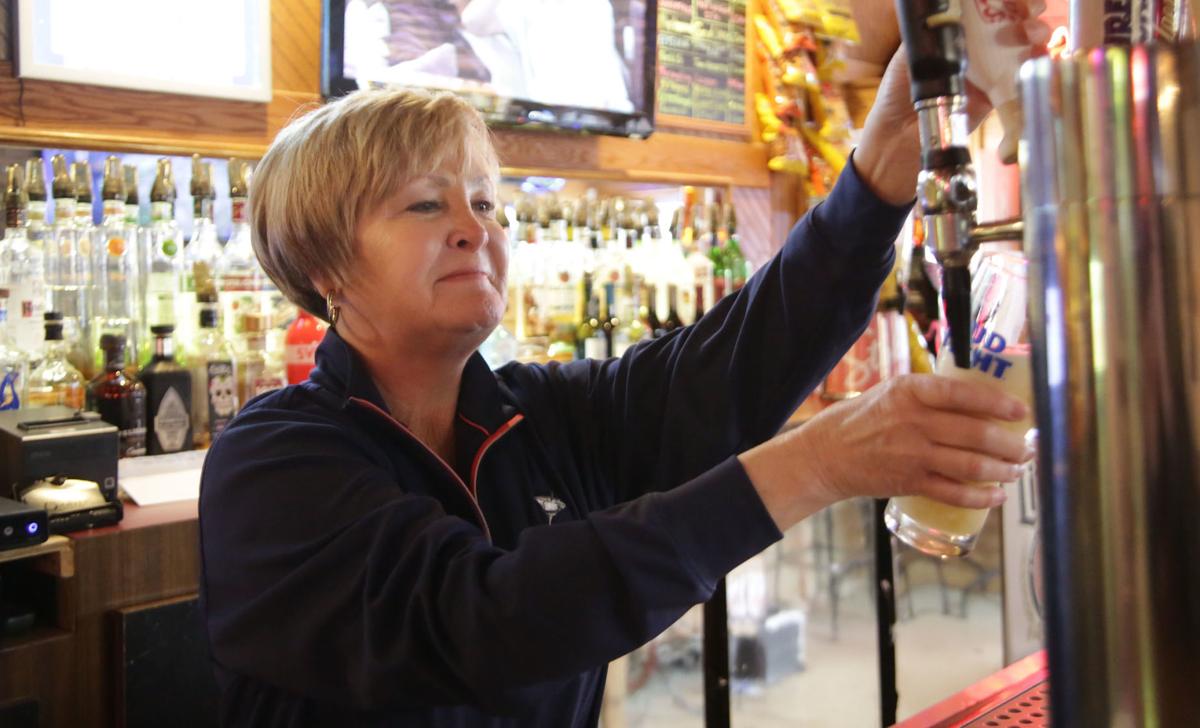 Deborah Koester, one of the new owners of Johnny's Tap, pulls a beer from the renovated tap system. The new owners of the Munster establishment rehabilitated it into a comfortable place for drinks and food. 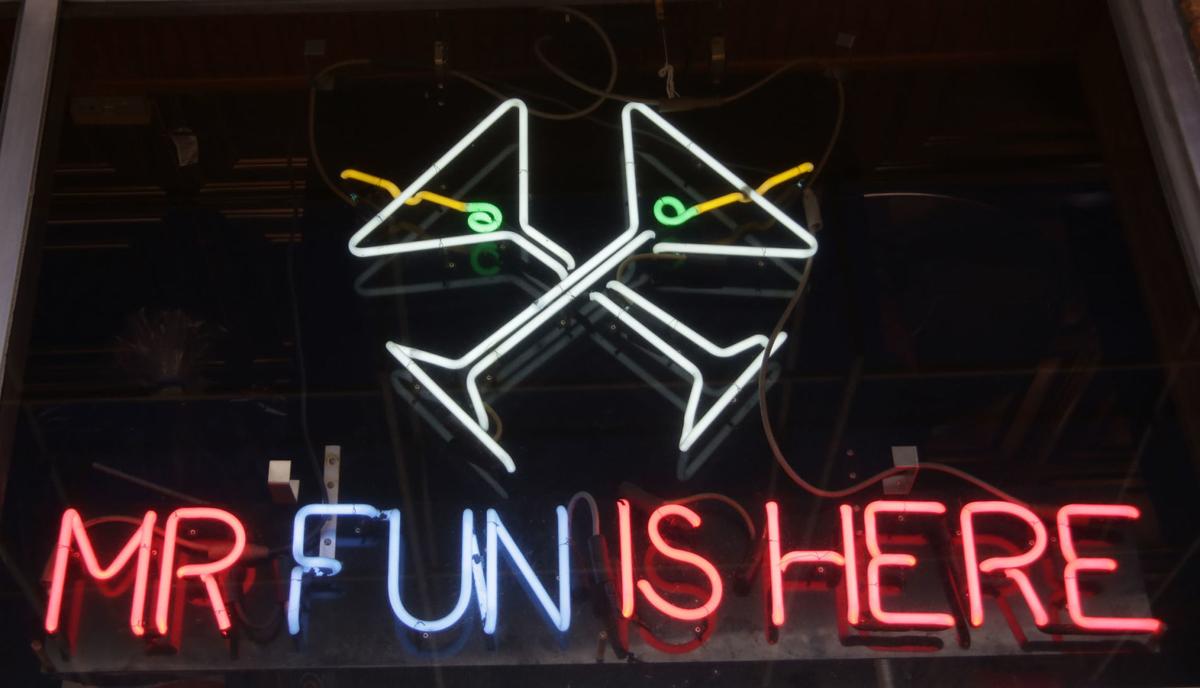 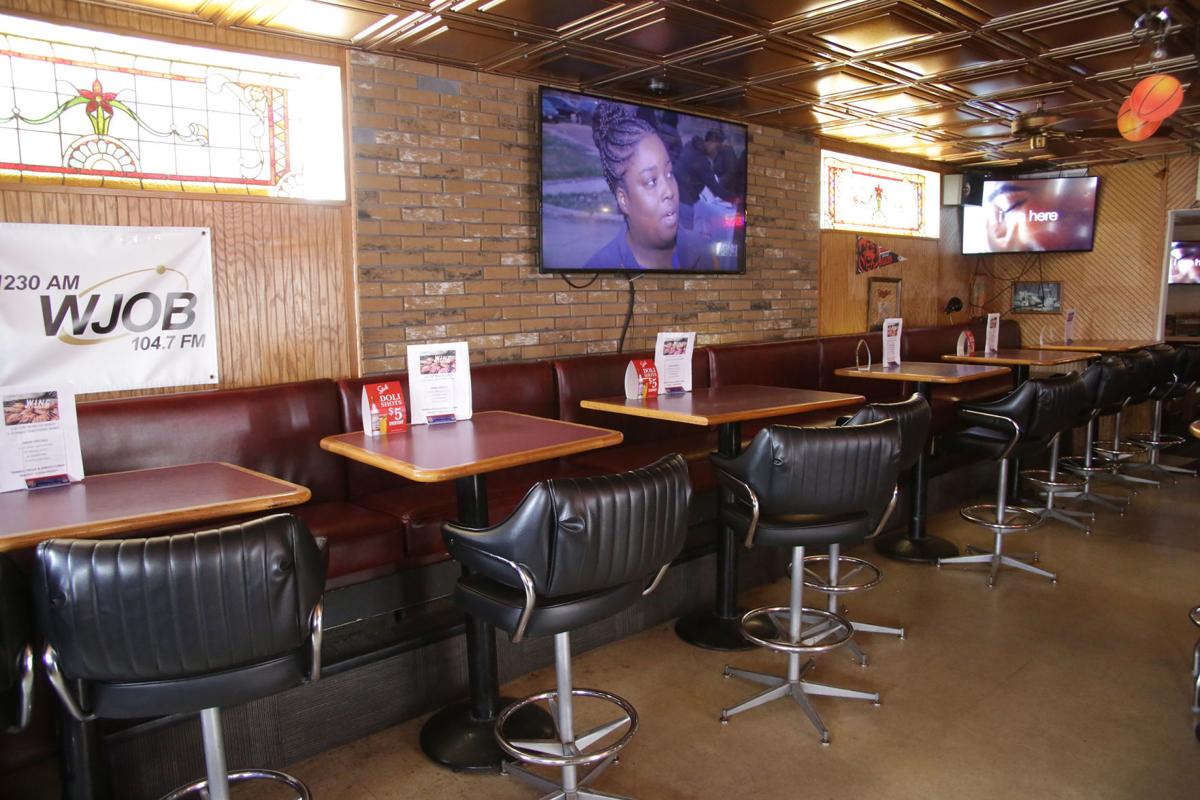 The former booths have been rebuilt and raised to high top level with new barstools added at Johnny's Tap in Munster. 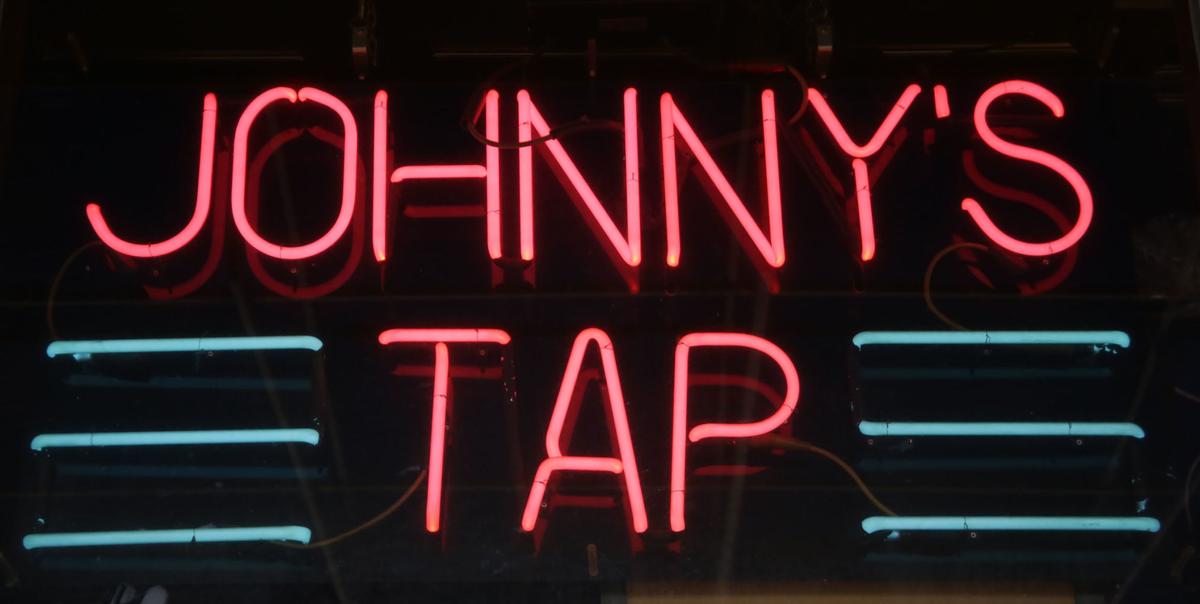 New owners at Johnny's Tap in Munster rehabilitated the bar into a comfortable place for drinks and food. 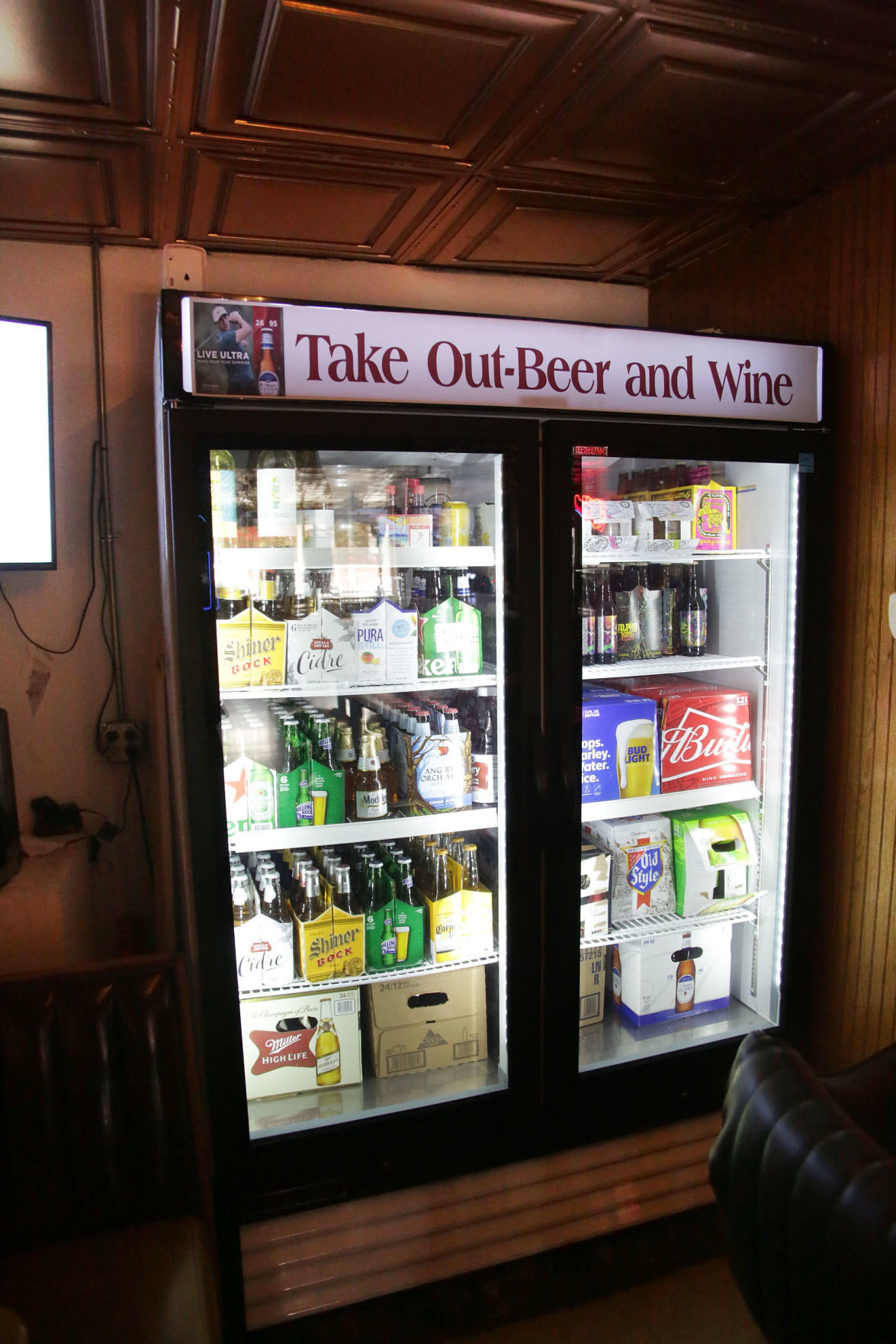 The former carryout area at Johnny's Tap in Munster is now used for seating, but there still is a cooler of beer and wine "to go." 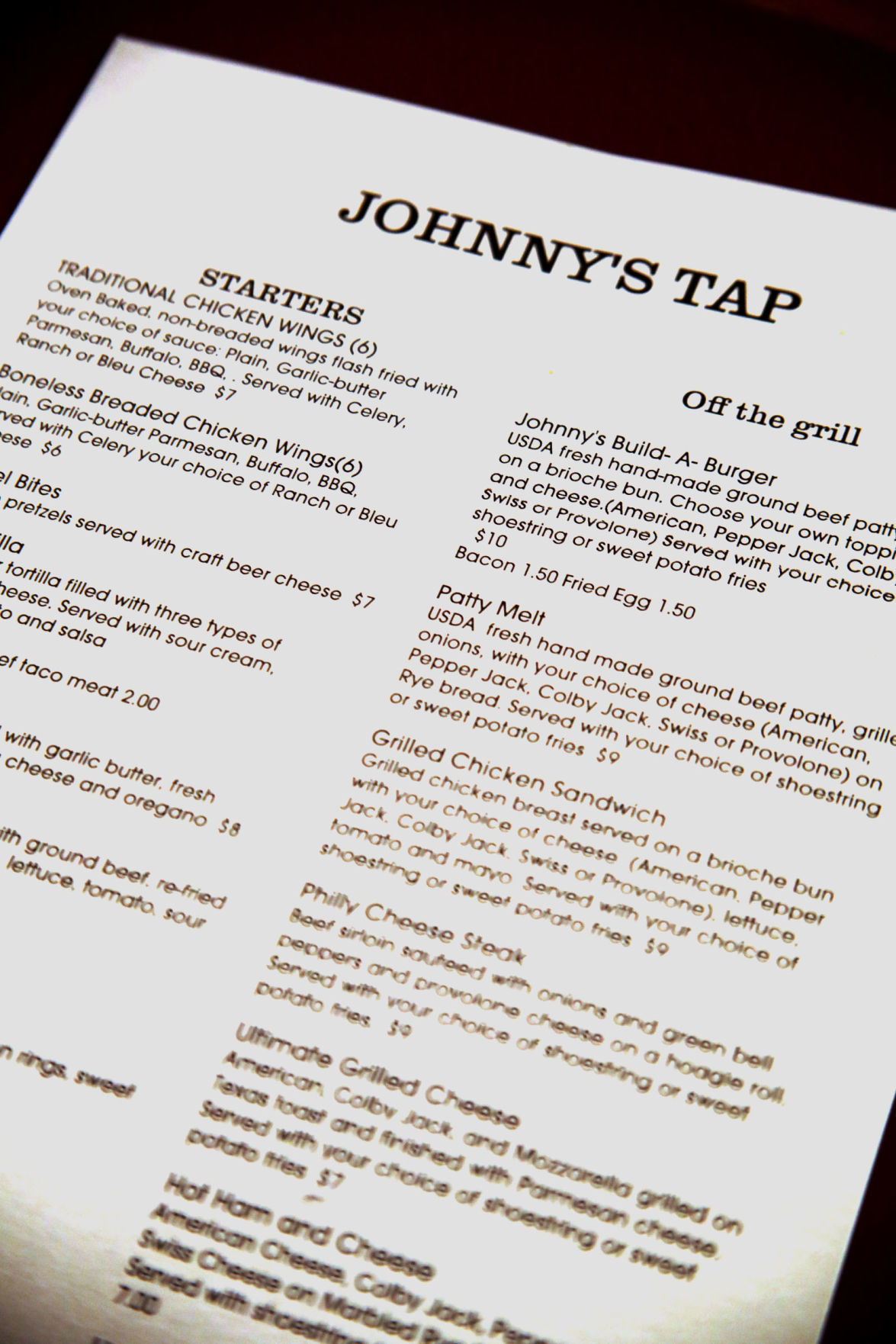 Deborah Koester was tending bar the other day at the longtime Munster landmark Johnny's Tap — known for its neon "Mr. Fun is Here" sign in the window — when she noticed the place was packed and there wasn't a single man at the bar.

Koester, Tim Traynor and two silent partners purchased the iconic corner bar at 8050 Calumet Ave. in Munster in 2017, after the son of the original Johnny died, and they have made extensive changes, including accepting credit cards, banning smoking, extending the bar, replacing the booths with more pub-style hi-top seating, and restoring a vintage 1950s Budweiser sign that's shaped like a guitar. They added nine taps, expanded the selection of craft beer, rolled out a food menu that goes far beyond the microwave pizzas Johhny's used to serve, and built an outdoor patio.

"It was built in 1956 and it's probably the only true corner bar in town," Traynor said. "It's so iconic to Munster. We initially explored other restaurant concepts, seafood concepts, this and that. But we decided it needs to remain the same. We've been improving it but keeping the basic feel and character of the place. Johnny's Tap is iconic. The Mr. Fun is Here sign is iconic. So many people come in here just because of the sign."

An updated menu now includes cheeseburgers, fries, artisan flatbreads, a grilled cheese sandwich, Rueben sliders and BLT sliders. On Taco Tuesday it offers $2 tacos on corn or flour tortillas that can be thrown in the deep-frier upon request to make them hard-shell. The burgers are hand-made, the sauces house-made, and the wings baked. A top seller is the "hangover bagel," a breakfast sandwich with eggs, pepper jack cheese, pepperoncini, and your choice of bacon or sausage that's served all day long.

Koester hopes to expand the menu even further, such as by adding fish entrees. She hopes to continue to strengthen the food offerings enough to draw office and hospital workers to the patio for lunch, coming to the bar just to eat, not even grabbing a beer.

Under the new ownership, the 63-year-old Johnny's Tap went from having three beers on draft to a dozen, with a selection that includes domestic beers, Guinness, India Pale Ales and craft Pilsners. It also carries liquor, wine and a wide selection of local craft beers in bottles.

"We change our beers seasonally and are adding a shanty for summer," Koester said. "We try to have 3 Floyds, 18th Street and Byway, places people have drank at. We try to get stuff people are familiar with."

One of the most dramatic changes they made was making Johnny's non-smoking on day one, even after a core group of regulars warned it would hurt the business. Instead, it's helped draw a much larger crowd.

"We love smokers, they drink more than anybody," Traynor said. "But now they go outside where we have heaters for them. Some smokers have even thanked us, saying they smoke less when they can't just light up at the bar. It's probably the best decision we've made as a business. Before there was a core group of six, seven, eight, nine, 10 regulars who would come in and smoke at the bar. Now we have 20 to 30 people sitting there and not smoking. So many people have come in and said they haven't stopped by for years because it was so smoky the last time they came."

Last summer the owners added an outdoor patio with garden planters and barriers that keep patrons safe from the traffic on Calumet Avenue. There are about 30 seats outside where people can drink or dine al fresco, with a pass-through window where they can get their food or beverage orders.

"People love it on days like today, but not so much when it's mid-summer and 95 degrees out," Traynor said.

They took the old dart board down and put in a Touch Tunes internet-based jukebox. They have events almost every night, including Texas Hold 'Em poker games Monday, Tuesday trivia nights, the trivia/bingo hybrid tringo on Wednesdays and open mic nights on Thursdays. On Fridays and Saturdays, they have DJs or live music, with bands like Soulfinger, The Mills Project, Dave & Dave Band, Cathouse and the No Name Blues Band.

"It's a lot of classic rock," Traynor said. "That seems to be what people want to hear."

They've been making ongoing physical improvements to the building, such as by eliminating the liquor store area, putting in new kitchen equipment and extending the bar to the wall to seat another six to eight customers. Overall, the place now seats about 75 bar-goers.

"It's retro, that's for sure," Traynor said. "We're continuing to build and improve, but we want to ensure Johnny's Tap remains Johnny's Tap."

The bar has a large customer base in the immediate vicinity, including many loyal regulars who appreciated the cozy, vintage ambiance, Koester said.

"To me, it really feels like Cheers," she said.

But Johnny's Tap continues to attract new visitors, including many people who stop by to snap selfies with the neon "Johnny's Tap" and "Mr. Fun is Here" signs.

There are slightly different accounts of the famous sign's origin.

Traynor heard the original owner was gruff and a regular who owned a sign company made it as a joke about his unfriendliness.

"He liked it so much he put it in the window," Traynor said. "He ran with it, and it's a great thing. When I first moved to the Region it's one of the first things that caught my eye."

Koester heard the customers always referred to the owner as being no fun.

"He was a curmudgeon, so he went and made the sign as a joke," she said. "It's been there ever since. People love it, they can't get enough of it. It's known far and wide. I was in Bonita Spring, Florida in a hot tub with four people and they saw my husband was wearing a Johnny's Tap shirt and they said, "oh, that's Munster, Indiana."

The average Hoosier is carrying $5,101 in credit card debt, up 1% as compared to the first quarter of 2018, a new report found.

Whiting Park Festival Orchestra to perform on lakefront, including a 'Pierogis and Mascots' program

The Whiting Park Festival Orchestra will perform four free concerts at the Whiting Lakefront Park on Lake Michigan this summer in its 20th season.

The developers behind JAK's Warehouse plan a new entertainment center with "boutique bowling," an upscale restaurant and bar, an arcade, Laser…

MICHIGAN CITY — If you've ever dreamed of a lakefront home on Lake Michigan, a developer is bringing more options to the market.

Liquids, Evil Waves and The Figbeats to play Porter's Tap

Buckle up for "An Evening of Rat Rock" in Hammond's Hessville neighborhood Saturday.

Steel imports grabbed just 19% of the U.S. market share in March, far off the record market share of 29% that beleaguered the domestic industr…

Centier to open its first branch in Michigan City this summer

CBD plant to open in Michigan City, hire more than 50

A Colorado processor of industrial hemp plans to open one of Indiana's first factories to produce cannabidiol, the CBD that's being sold acros…

Rock out like it's the 18th century this weekend when Classical Blast plays the Hobart Art Theatre.

Deborah Koester, one of the new owners of Johnny's Tap, pulls a beer from the renovated tap system. The new owners of the Munster establishment rehabilitated it into a comfortable place for drinks and food.

The former booths have been rebuilt and raised to high top level with new barstools added at Johnny's Tap in Munster.

New owners at Johnny's Tap in Munster rehabilitated the bar into a comfortable place for drinks and food.

The former carryout area at Johnny's Tap in Munster is now used for seating, but there still is a cooler of beer and wine "to go."