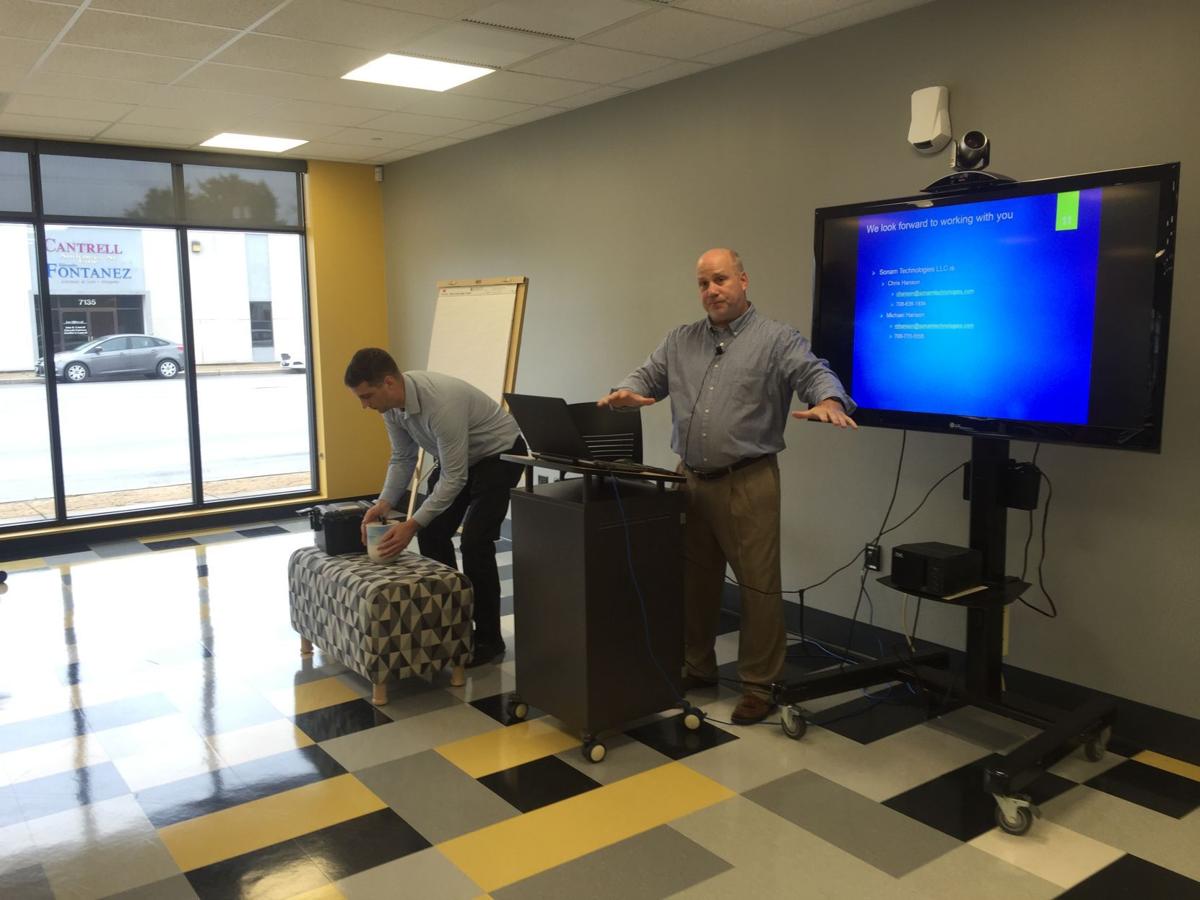 Brothers Michael, at left, and Chris Hanson, of the startup Sonam Technologies, get ready to demonstrate their device to help prevent concussions Wednesday at Purdue University Northwest in Hammond. 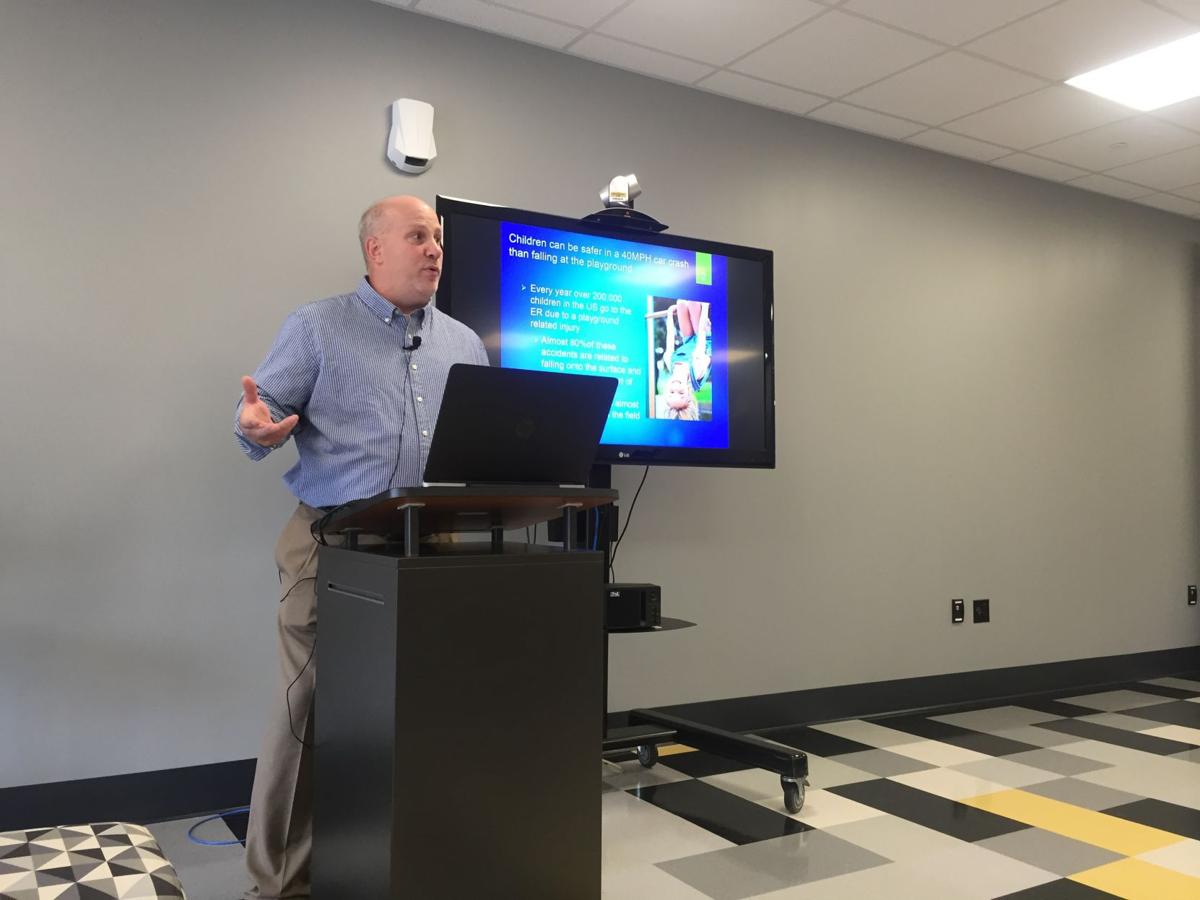 Chris Hanson, a founder with his brother of the startup Sonam Technologies, talks about their device to help prevent concussions Wednesday at Purdue University Northwest in Hammond. 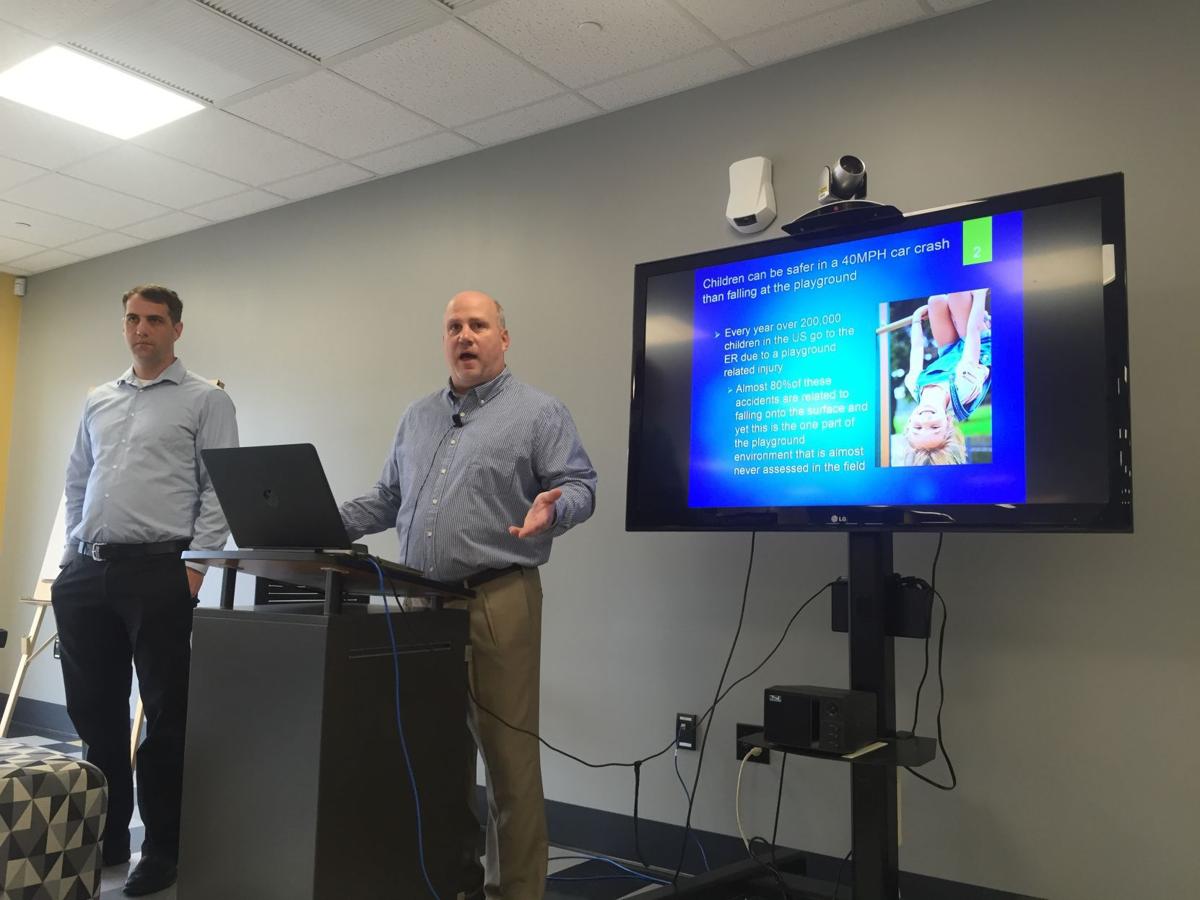 Chris Hanson, a founder of the startup Sonam Technologies, talks about its device to help prevent concussions at Purdue University Northwest, in Hammond, on Wednesday. Standing at left is his brother Michael, a co-founder of the company.

A Munster startup has developed a device that should make playgrounds safer.

Sonam Technologies created a tester that assesses the concussion risk of surfaces on playgrounds and athletic fields, based on standards the automotive industry developed during crash tests.

Founders Chris and Michael Hanson already have sold 55 test units, including to customers in Israel, Singapore and Australia. Early buyers of $3,500 ST Impact Analyzer CH include Disney, the City of San Diego, The Utah State Board of Education and The Canadian Playground Safety Institute.

The Hansons see a huge potential international market, with more than 135,000 playgrounds in the United States alone.

"As a football fan, it's true we're more aware of the concussion risk," he said. "People tell me they used to play on asphalt lots with broken glass. That's true. I was there. But more awareness doesn't lessen the actual problem."

A Centers for Disease Controls study found an average of 21,000 children a year get taken to an emergency room after falling on their head at a playground. Statistically, kids are safer traveling in a car at 40 mph, Chris Hanson said.

Safety testing of playground surfaces often doesn't get done because other systems on the market cost more than $12,000, and equipment calibration can cost an additional $2,000 a year. But it's becoming increasingly common because of more stringent rules and increasing litigation.

Parks, schools and other playground operators could help inoculate themselves against lawsuits by doing frequent safety testing and documenting it to show they're not negligent.

"You can never eliminate liability," Chris Hanson said. "But you can mitigate the risk."

The Hansons made a pitch to local investors Wednesday morning at the weekly 1 Million Cups speaker series at the Purdue University Northwest’s Commercialization and Manufacturing Excellence Center in Hammond. Their tester is about the size of a 6-year-old child's head and can be dropped on any surface, instantly generating data on whether it's too hard and if it would cause an unacceptable amount of head damage.

As it ramps up, Sonam Technologies expects to sell 900 to 1,200 units per year. The fledgling company needs investors because it's currently self-funded and only has enough capital to produce the testers in batches of 20.

Sonam isn't looking to hire any employees, but supports existing manufacturing jobs. Most of the devices are made within a 50-mile radius to ensure quality, Michael Hanson said.

"About 95 percent of it is locally sourced," he said.

More business with Disney could drive sales, as others will follow it lead. The Hansons have pitched the testers to park boards and also could generate demand by getting parents to pressure school boards into buying them to prevent head and brain injuries.

"I don't know if you've ever tried to crack into the mommy blog cabal," Chris Hanson said. "But it's a tightly controlled resource."

A startup from Purdue University Northwest advanced to the final 32 digital startups in the national Student Startup Madness Competition, whic…

Logistics education company to give talk at Purdue Northwest

After a three-week hiatus over the holidays, the 1 Million Cups talks intended to inspire and connect local entrepreneurs returns to Purdue Un…

The founder of Sonam Technologies, which developed a tester that can assess the concussion risk of recreational surfaces, will give a talk at …

Green Sense Farms, an indoor farm company based in Portage, has raised more than $120,000 in a crowdfunding campaign on startengine.com.

Veteran entrepreneurs have the right stuff

Ramon Morales joined the Army when he was 17 because he wanted to be a mechanic and knew he could get a free education that way.

A new south suburban bat company, Homewood Bat Co., has been such a hit that it’s already in the big leagues.

Only five community banks will be left standing in NWI

Northwest Indiana once was home to 51 independent community banks, but it’s becoming harder than ever to get a loan from a bank where you migh…

TravelBox wants to cater to your travel comfort

Everyone's arrived at a hotel at some point only to realize they forget to pack toothpaste, a razor or some other toiletry.

Anyone with an idea for a startup can find out if they have what it takes at Purdue University Northwest's Big Sell entrepreneurial competition.

Brothers Michael, at left, and Chris Hanson, of the startup Sonam Technologies, get ready to demonstrate their device to help prevent concussions Wednesday at Purdue University Northwest in Hammond.

Chris Hanson, a founder with his brother of the startup Sonam Technologies, talks about their device to help prevent concussions Wednesday at Purdue University Northwest in Hammond.

Chris Hanson, a founder of the startup Sonam Technologies, talks about its device to help prevent concussions at Purdue University Northwest, in Hammond, on Wednesday. Standing at left is his brother Michael, a co-founder of the company.