New owners acquire historic Frost House for record price of $850,000
Share this
1 of 6 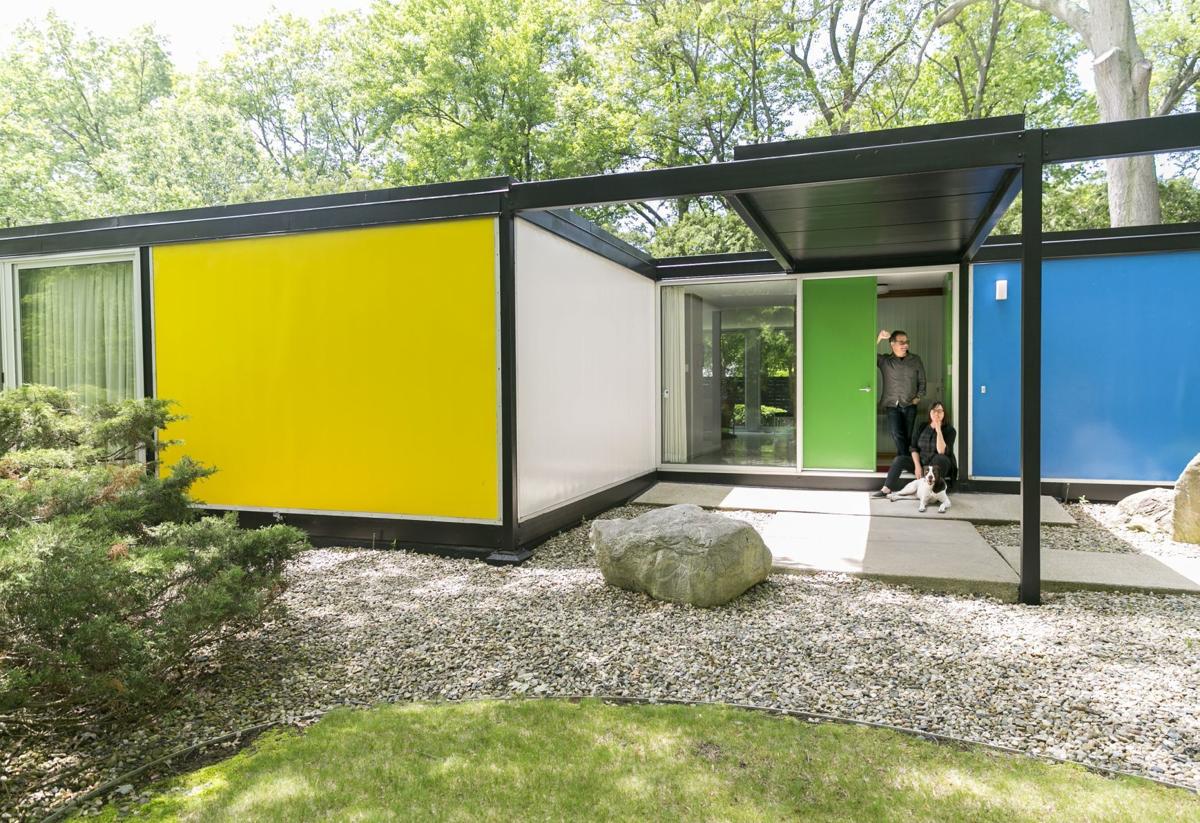 Former homeowners Bob Coscarelli and Karen Valentine pose outside the Frost House, a mid-century modern home in Michigan City recently added to the National Register of Historic Places. It sold for $850,000, a record for the Michigan City off the lakefront. 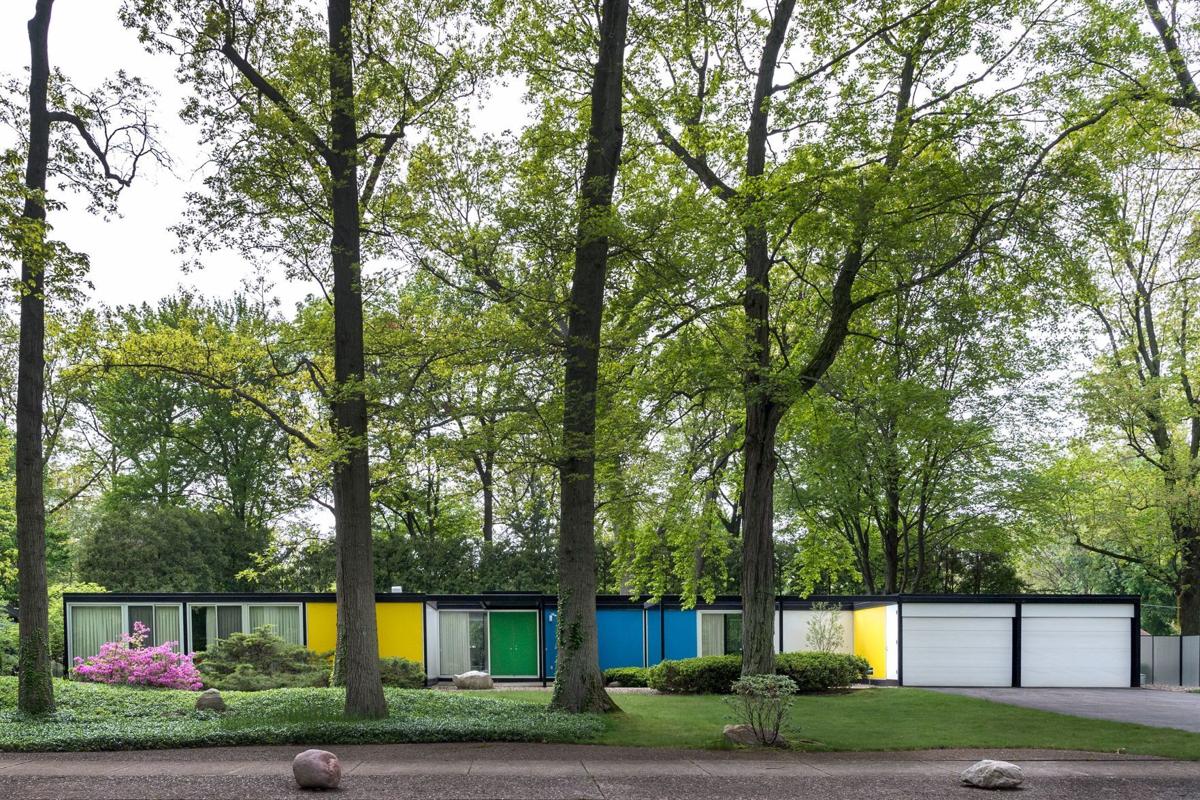 The Frost House in Michigan City has new owners. 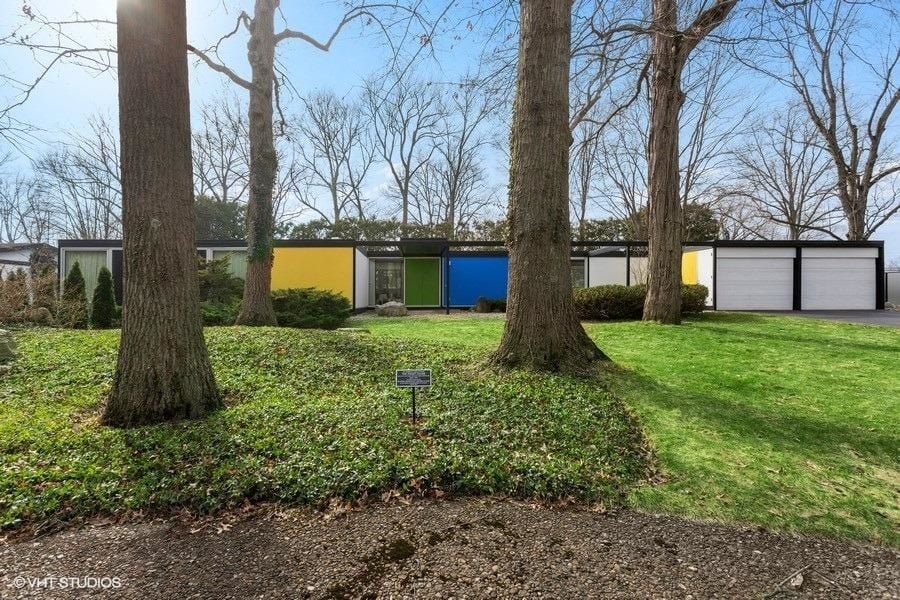 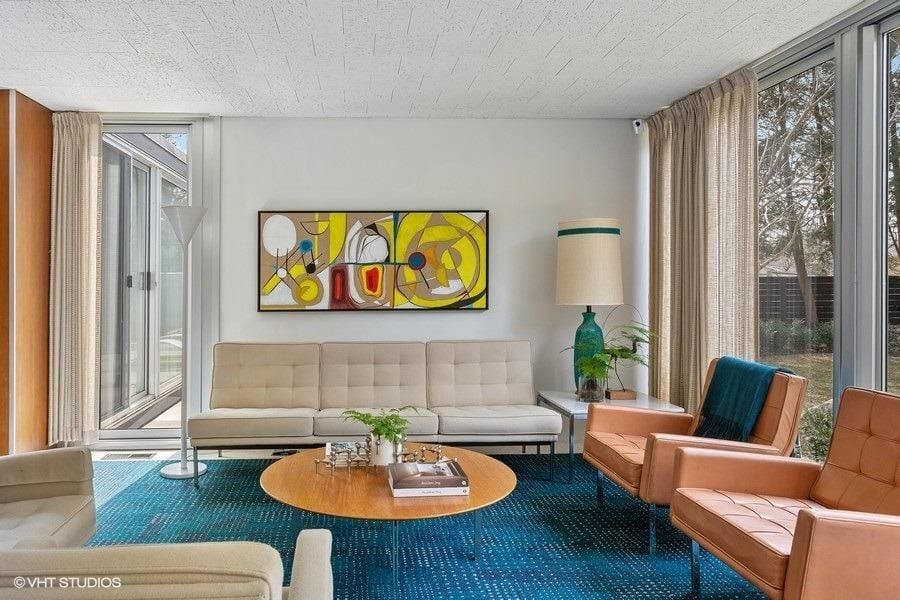 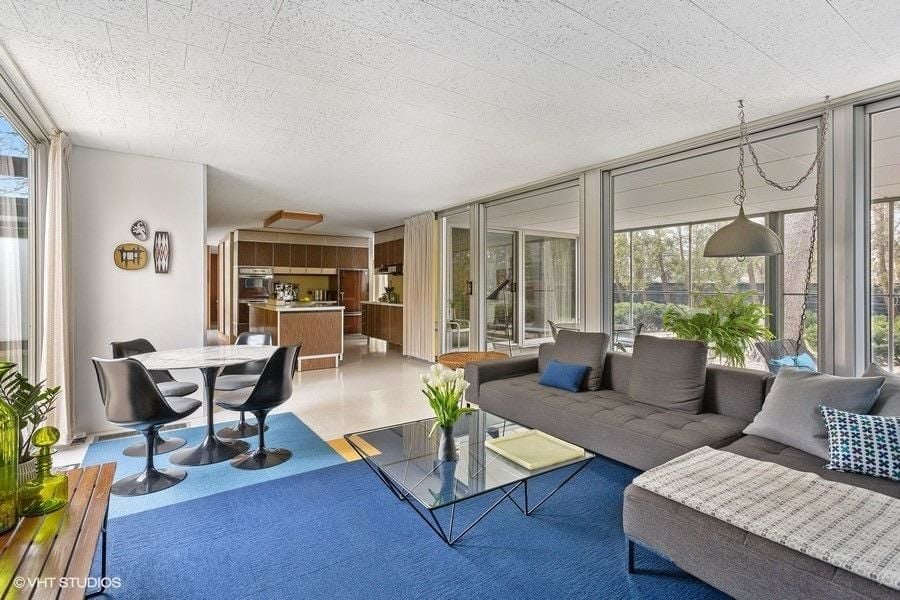 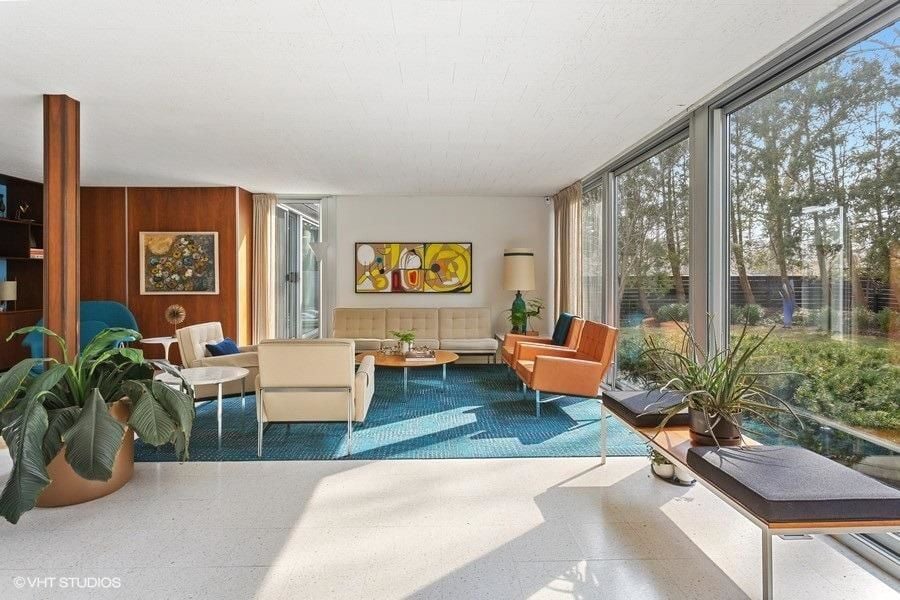 New owners have acquired the historic Frost House — a rare prefabricated home that embodies 1960s design — for $850,000, a record for the Michigan City market off the lakefront and more than $100,000 over the list price.

Previous owners Karen Valentine and Bob Coscarelli had purchased the 2,340-square-foot architectural gem, which is listed on the National Register of Historic Places, for $192,000 five years ago.

The rectangular glass and steel three-bedroom house at 3215 Cleveland Ave. in Michigan City was one of fewer than 100 mass-produced homes made with baked enamel panels by Alside Homes Corp. of Akron, Ohio in the 1960s. The long, flat-roofed prefab home was designed by Emil Tessin, evoking the International Style of architecture and the Modern Movement.

Coscarelli and Valentine found the house and its mid-century modern furnishings and Knoll furniture in mint-quality condition when they bought it sight unseen in 2016. They worked to preserve it, chronicle its history on thefrosthouse.com website and document it on an Instagram account with 11,800 followers. It's generated a lot of media coverage, including from Dwell, Curbed and Crain's Chicago Business, which described it as a "time capsule of fashionable life in the 1960s" with "'Mad Men' cool."

They were able to get it listed on the National Register of Historic Places last year and listed it for sale in March. Bids came in from as far as California.

“Drawing interest from as far as California, this iconic property eventually had 10 offers," real estate agent Rudy Conner of @properties said. "The new stewards took ownership on May 14 and are committed to continuing the legacy left by Bob Coscarelli and Karen Valentine. The property is just magnificent. It's really a testament to them that I had over 100 email inquiries, and dozens of phone calls and texts from interested buyers."

The new owners, who are from Chicago, did not wish to be identified.

“Rudy sold us the home sight unseen and we could not have been more grateful for her savvy assistance," Valentine and Coscarelli said in a statement. "In learning the home was a collaboration by design legends Emil Tessin, Paul McCobb and Knoll, preservation was first and foremost on our minds. We thoughtfully updated only where it was required, with new additions of garden, fence and the pool built to respect the original design aesthetic. We are humbled to have left a small legacy in obtaining a National Historic Place registry designation. When it came time to sell, Rudy was our only choice. We knew her diligence would pay off in finding us like-minded stewards to continue The Frost House legacy and to achieve our desired sales price and terms for this unique property."

Lubeznik showcasing exhibits that include work of Theaster Gates and a Lego Kurt Vonnegut Jr.

The Lubeznik Center for the Arts in Michigan City is showcasing two exhibits that include the work of acclaimed Chicago artist Theaster Gates and Lego versions of novelist Kurt Vonnegut Jr. and serial killer Belle Gunness.

Newly released Indiana Department of Health data show there's a wide disparity in the demographics of who's getting vaccinated.

Irish immigrants settled across Northwest Indiana, which once had a neighborhood known as Little Ireland

More than one-tenth of Indiana residents claim some Irish ancestry, according to the U.S. Census Bureau.

The restaurant and bar at 401 Franklin St. will donate 50% of all proceeds from sales of its special Midnight Moon Bath cocktail in March to the lakefront arts center, which offers an array of arts programming, education and events.

"This shatters all historical records by large amounts, with the second best year not even coming close," @properties broker Michael Conner said. "There has never been interest in Michigan City at this level."

Wearing a mask is now required at the Indiana Dunes National Park, at least in buildings and when you can't keep six feet away from others hiking on the trails.

Port of Indiana-Burns Harbor Director Ian Hirt is resigning after four years at the captain's deck to return to the private sector.

A grant from the Lilly Endowment in Indianapolis will enable the Lubeznik Center for the Arts in Michigan to provide after-school arts education and other outreach programs.

MICHIGAN CITY – Karen Valentine and Bob Coscarelli wanted to build a glass and steel house in Southwest Michigan but didn’t have any luck. The…

MICHIGAN CITY – Karen Valentine and Bob Coscarelli wanted to build a glass and steel house in Southwest Michigan but didn’t have any luck. The…

July Nymex Midwest Domestic Hot-Rolled Coil Steel Futures recently reached a record high of $1,801 a ton, more than double the low sunk to during the coronavirus pandemic during the first quarter of last year.

A historic home designed by the renowned architect Frank Lloyd Wright recently sold for more than $1 million in Ogden Dunes.

Former homeowners Bob Coscarelli and Karen Valentine pose outside the Frost House, a mid-century modern home in Michigan City recently added to the National Register of Historic Places. It sold for $850,000, a record for the Michigan City off the lakefront.

The Frost House in Michigan City has new owners.