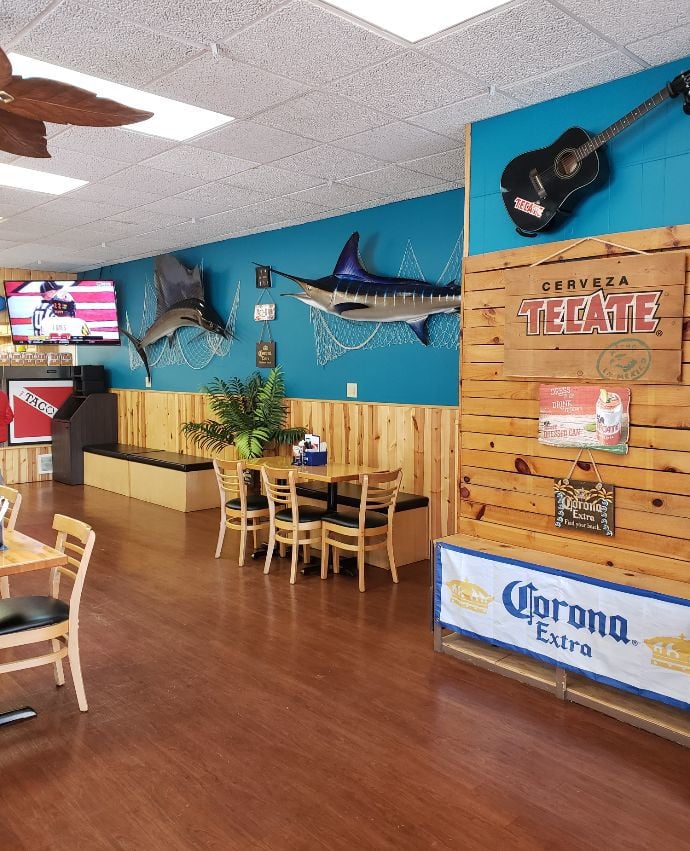 The Taco Dive has opened in downtown Whiting.

Fans of Taco Trader in Dyer and the legendary Mexican Inn at East 95th Street and South Ewing Avenue on Chicago’s southeast side may want to stop by The Taco Dive in Whiting.

The recently opened Mexican eatery at 1452 119th St. has brought back the old family recipes for crispy beef and soft cheese tacos that built the Mexican Inn’s reputation as a South Side landmark near Calumet Park and the Calumet River, not far from the state line.

Mario Cornejo Sr. started the Mexican Inn in 1961 and ran it until he died in 2010, two years before it closed.

“It was written up in the Sun-Times,” Taco Dive owner David Jimenez said. “It was widely known for delicious food.”

Jiminez, a Whiting resident, ran Taco Trader on U.S. 30 in Dyer between 2013 and 2016 but ultimately decided it wasn’t a good fit, though it was often bustling. He ended up running pop-up restaurants in Whiting in the Indy Perk Cafe and the American Legion, the latter of which was featured in a Chicago magazine article.

He ended up taking over the former CJ Cafe space in downtown Whiting. It was extensively renovated to have a seaside look reminiscent of Key West or Margaritaville, in order to appeal to people who came to Whiting to visit Whihala Beach.

“We’re steps away from the lake,” he said. “You can continue your beach visit here. We’re tastefully tacky just like Whiting. We’re loud but our food is louder.”

In addition to traditional Mexican fare, The Taco Dive makes Mexican versions of American comfort food, including the Sloppy Jose on a telera roll and a Sonoran hot dog on a bolilo roll with beans, crema and queso fresco.

The 1,300-square-foot restaurant, which seats around 40 people, also is known for the original crispy beef taco the Mexican Inn first made in 1961. The fried taco features fresh iceberg lettuce, Roma tomatoes, crumbled cheese, specially seasoned beef, and fresh tortillas made by hand the old fashioned way in Pilsen.

“There’s a special procedure,” Jiminez said. “It’s a labor of love. These aren’t pre-made shells like Ortega or some supermarket brand. They’re real tortillas pinned by hand with three toothpicks.”

The restaurant plays music from country musicians like Toby Keith and heavy metal artists like Sammy Hagar. On the weekends it plays 1980s music videos and also sports games.

The Taco Dive also caters to parties of any size, including at the BP Whiting Refinery and U.S. Steel mills. The eatery itself can be booked out after hours for a food, beverage and movies package.

“We want people to come in and enjoy a bucket of beers and some tacos,” Jiminez said.

Jiminez located the business in his hometown of Whiting partly because he was encouraged by all the new development.

“Mayor Joe (Stahura) is making it into more of a destination than a border town,” he said. “We’re trying to be more like a New Buffalo where you can come for a waterfront meal. Whiting has the Whoa Zone, the Mascot Hall of Fame and Whihala Park. Our food is loud and so are the people. We’re a fun place where people can let loose.”

In its first month, the restaurant has drawn people from as far as Arizona, St. Louis and the Upper Peninsula of Michigan. Former customers of Taco Trader and the Mexican Inn have returned for old favorites like the soft cheese taco, a "95th and Ewing thing" in which corn tortillas are smothered in cheese sauce and filled with more cheese and one's choice of meat or beans.

“People take one bite of my food and they start crying,” he said. “It takes them to a better place. Their dad worked at the mill and stopped by the Mexican Inn after work on Friday to bring back a bag of tacos for dinner. My uncle’s restaurant is why I have a big responsibility to do it right. I’m carrying on his legacy.”

Busy Bees Pottery and Arts Studio is giving people a new creative outlet to express themselves at Southlake Mall in Hobart.

Owner Nakia Sprouse, who also co-owns Kennedy Avenue Chiropractic and Integrated Body and Medicine in Hammond, brought the first location of the Ohio-based franchise, mostly located on the East Coast, to Northwest Indiana.

“We are a pottery and arts studio,” Sprouse said. “We do canvas painting, glass fusing, glass painting and board painting. We have a party room for ladies nights out, when the kids are out of school or special classes.”

The studio has a kiln to blow glass, the only artistic creation that requires customers to visit more than once. The space can be rented out for special events, such as fundraisers and Girl Scout meetings.

Sprouse claims not to have an artistic bone in her body but was drawn to the franchise.

“I just really wanted to open a business that the whole family can enjoy,” he said. “This has something for everyone. It’s a place to come and be creative. Anybody can be creative.”

Busy Bees accepts appointments but anyone can walk in and sign up to create art, which can take anywhere from 15 minutes to three hours. There are more than 300 different designs they can use while painting, and they can make practical items like coffee mugs, bowls and vases in the pottery studio.

“Art is personal,” Sprouse said. “It’s what you make of it. Art is subjective.”

Busy Bees is located on the second floor of the Southlake Mall, by Macy’s.

“It’s the central hub of Northwest Indiana,” Sprouse said. “Everyone comes to the mall.”

The business closes slightly earlier than the mall itself does since people need time to finish their artworks.

Catering to the brunch crowd, it will offer Bloody Marys, mimosas, and freshly squeezed orange juice.

Aurelio’s Pizza at 416 Ridge Road in Munster suffered a fire more than a year ago, in early November of 2018.

The classic Region pizzeria, known for its thin-crust, thick-crust and stuffed pizzas, was originally supposed to be renovated and reopened within five months. But the restaurant has been fenced off with little construction work visible until recently, when work crews returned.

Munster Town Manager Dustin Anderson said Aurelio’s Pizza had all the permits it needed and the hold-up had been related to insurance issues.

Or rather, you are.

The craft beer taproom at 313 Ridge Road in Munster features a self-serve tap system in which people can pour their own craft beer, wine, hard seltzers and mixed drinks. Similar establishments have cropped up across the Region in recent years, including Brewfest in Highland, Valpo Pour House in Valparaiso, and Tap House in Michigan City.

313 Taproom occupies a two-story house by Bombers BBQ. It features state-of-the-art screens that showcase what’s on tap and an outdoor patio.

Several new businesses have opened or are coming to the Region, including a Planet Fitness to Highland.

Year in Review: Mixed picture for heavy industry in 2019 despite more than $2 billion in investment

NIPSCO estimates shift from coal will save $4 billion

NIPSCO decided to transition away from the coal it's burned for 90 years because of financial considerations, not environmental concerns, company President Violet Sistovaris told the Lakeshore Chamber of Commerce Wednesday.

I Am Popcorn opened a gourmet popcorn shop in the former site of Bomber's BBQ in Munster.

Hiring military veterans and reservists boosts the bottom line, according to a new study by Indiana University Northwest professors.

Regional artist Johnny V and Friends band has made its annual celebration of Neil Young's music – now in its eighth year – a holiday tradition in Michigan City.

Emilio's in Highland, Amici Grill and Pizzeria in Valpo, Harold's Chicken Shack in Griffith, Mediterranean Grapevine Cafe in Crown Point and Rapid Fired Pizza in Merrillville are all opening or recently opened.

"The original outlaw" David Allen Coe will perform a concert in Highland next month.

Pier 1 to close stores in Hobart and Valparaiso

Pier 1 is closing its stores in Hobart and Valparaiso, but the Schererville location will remain open.

Craft beer and doughnuts - together at last at Michigan City gastropub

Leeds Public House to pair donuts with beer before the Shelf Ice Brewfest.

Fire off a few celebratory shots from a T-shirt cannon because Whiting's Mascot Hall of Fame is up fur a major award.

The previous owner of Monroe Pest Control in Hobart was honored for excellence in his field.

Macy's won't say whether its stores at the Southlake Mall and River Oaks Center will make the cut.

The refinery became unprofitable and shut down in 1973, and suffered a major fire when naphtha erupted in an abandoned tank in 1980.

Indiana Beach customers are trying to get refunds for season passes for their families, and in some cases thousands of dollars for cottage and campground rentals.

Events and attractions draw people to downtown Whiting, which has seen an influx of new businesses in recent years like Standard Taproom, the Region Escape Room and the upcoming Grindhouse Cafe.

BP aims to become net zero on carbon by 2050

The Southlake Mall has restricted hours in response to the coronavirus outbreak.

Cafe Fresco on the Old Courthouse Square in historic downtown Crown Point is undergoing a facelift and rebranding to highlight its owner's charitable initiatives.

A longtime Gary institution has a new owner as it marks its 100th anniversary.

The Taco Dive has opened in downtown Whiting.